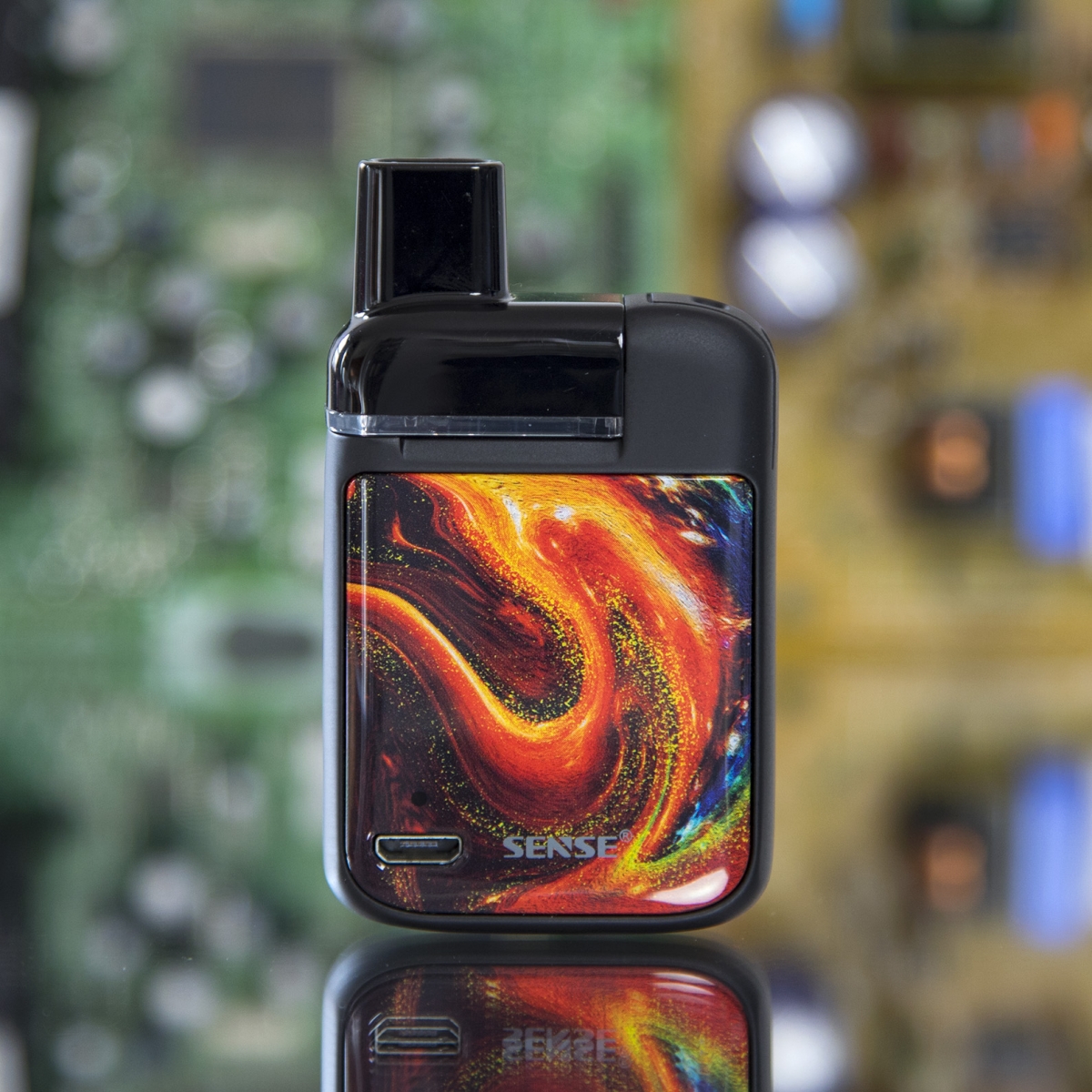 Supplied by the kind folks at Heaven Gifts for review purposes.

In A Nutshell Review

Just another f*#king pod? Yes indeed but a superb one that manages to jump out from the crowd, it has become one of the best stock coil pods I have tried for immense flavour and a satisfying draw, and feels like quality in the hand. 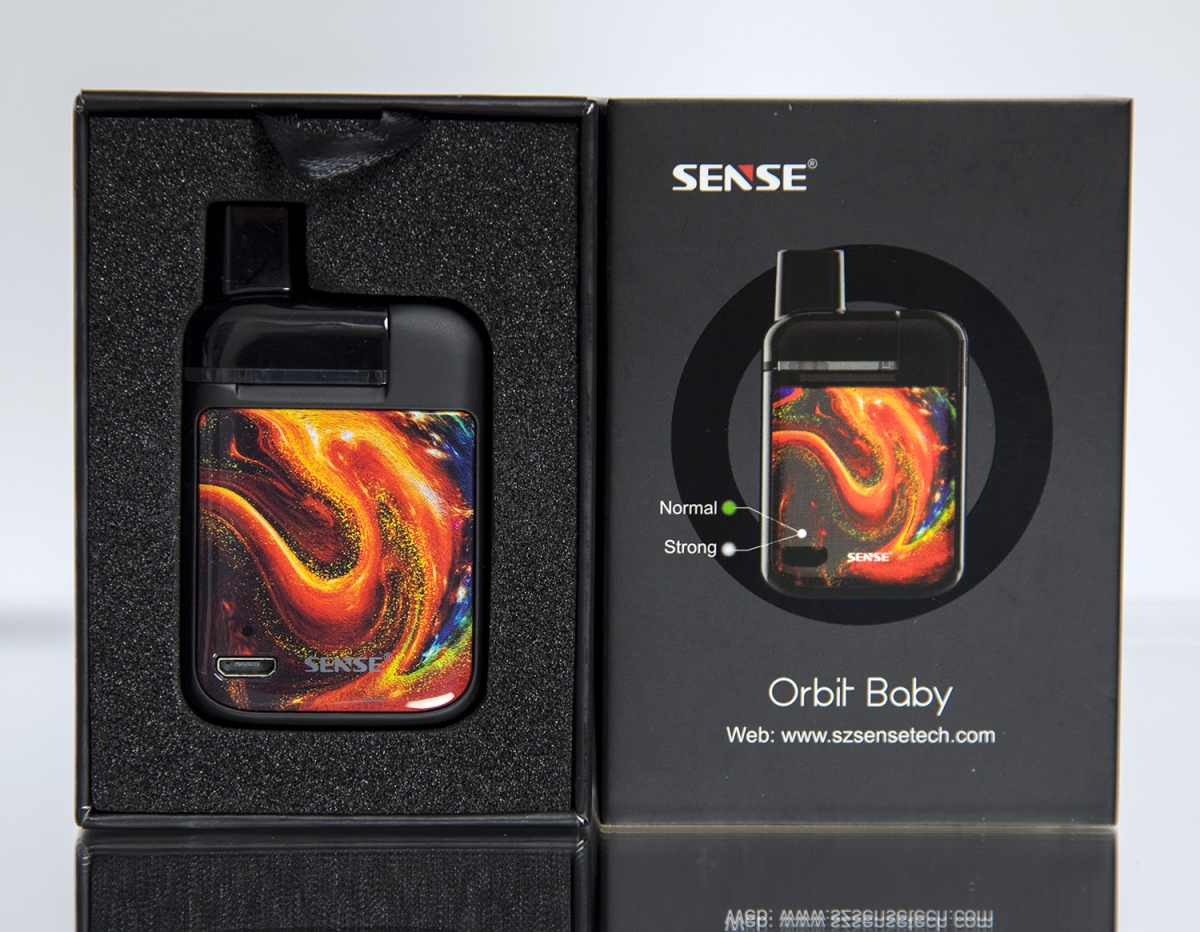 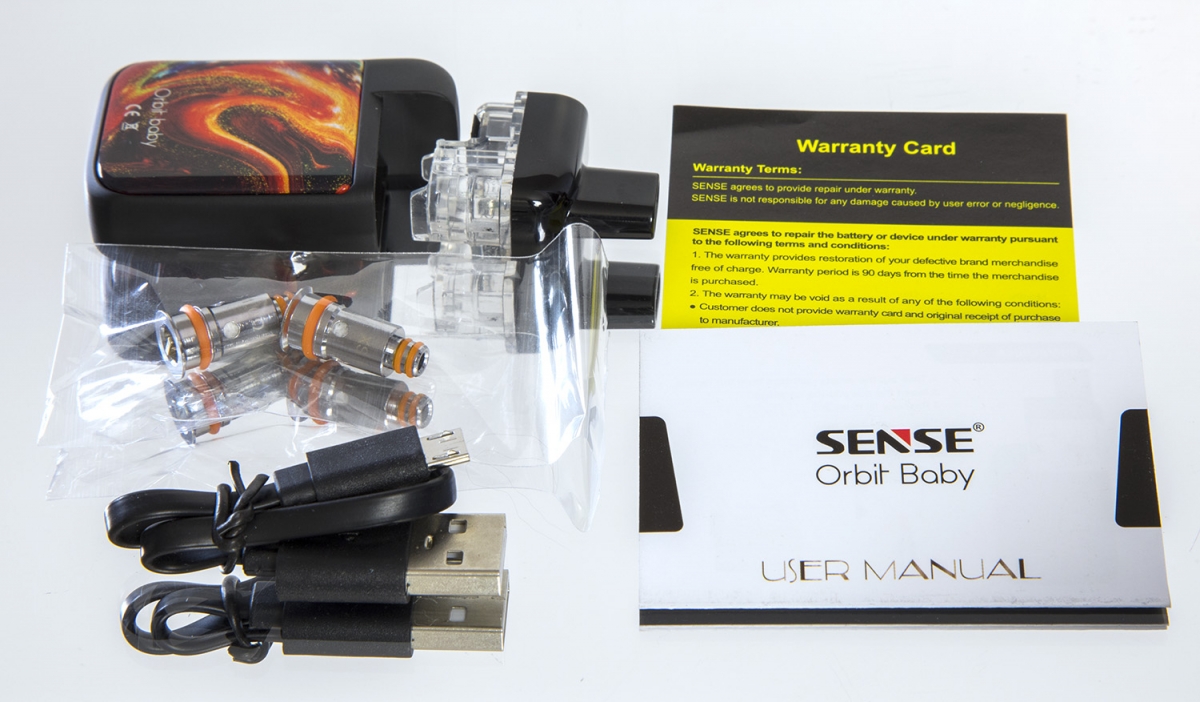 The Sense Orbit Baby comes in a neat little package with a simple outer sleeve and a foam lined box which holds the mod and pod cartridge. I have to admit I was already impressed visually, taking it out I was even more impressed as it looks superb and has a nice quality weight to it. Underneath you will find 2 x Orbit XS 1.0ohm coils, a short micro USB cable and paperwork. 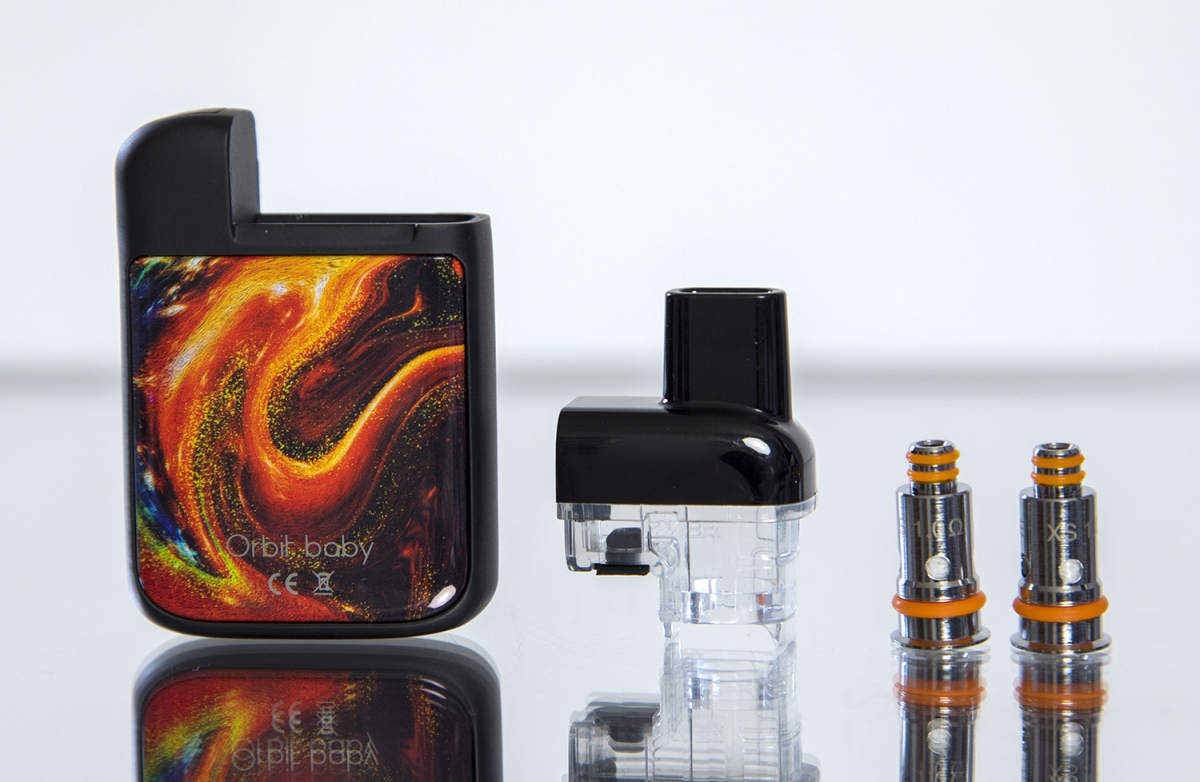 I went off to charge it, prime the coil and fill the pod. 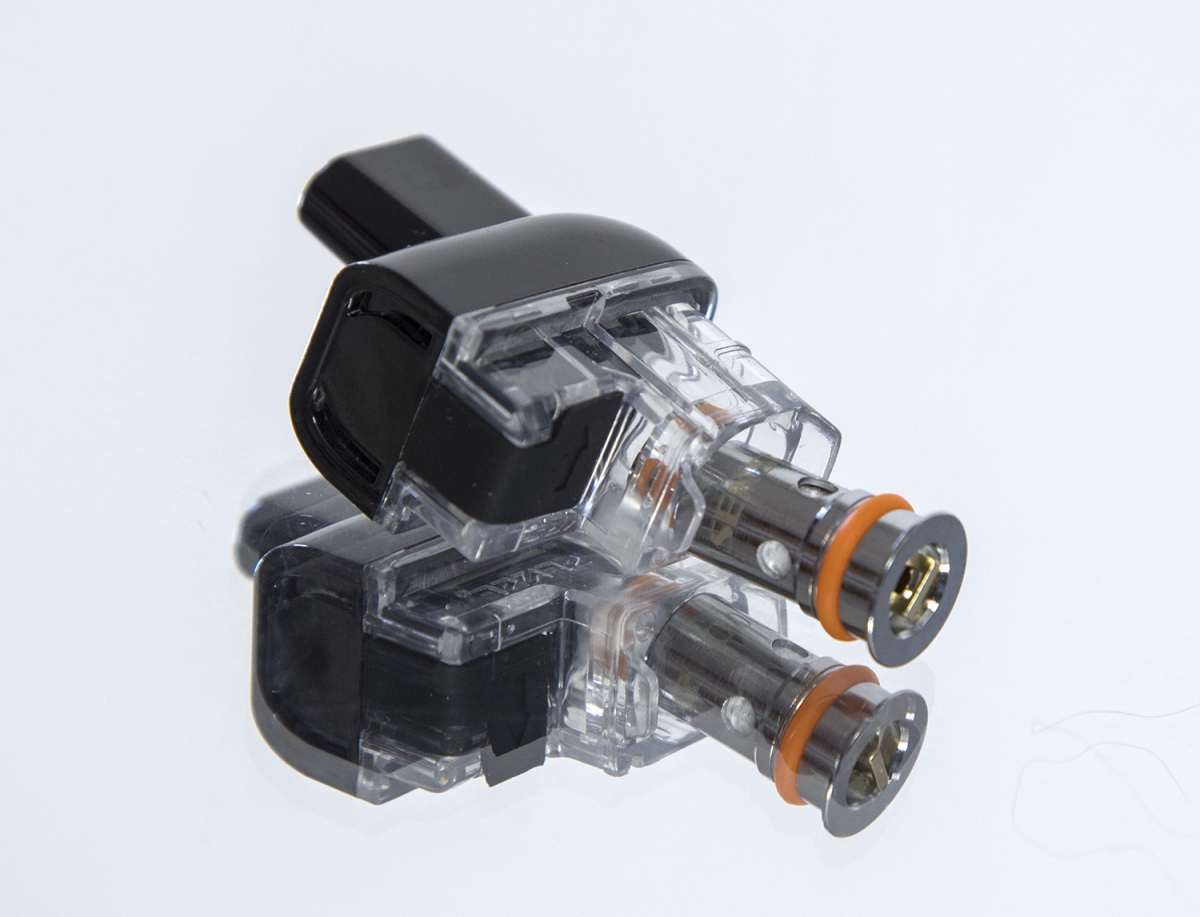 Fitting the coil is as simple as it gets, insert the coil from underneath the pod and press fit (prime it with a little eliquid first). 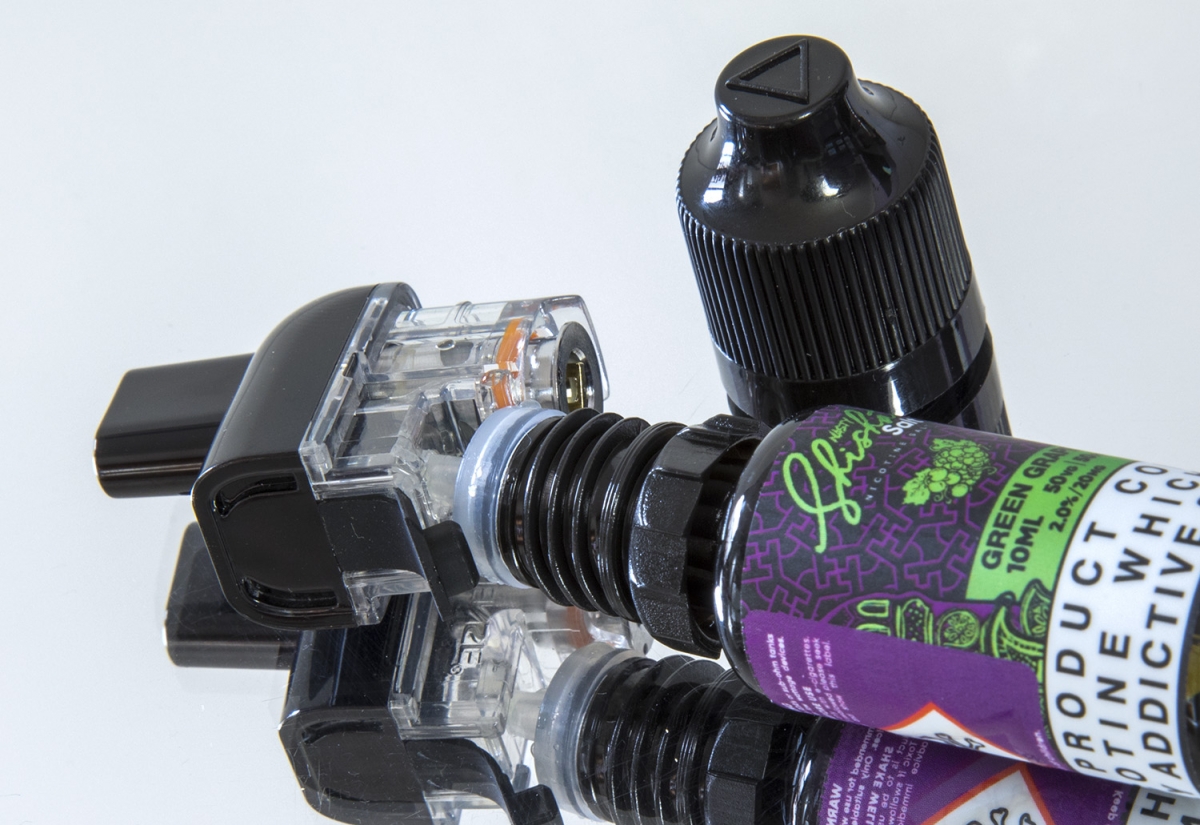 Filling is also simple and mess free, lift the silicone tab to reveal the juice port and fill it up starting with the coil end downwards. I found I could fill the pod all the way up without any air bubbles. The clear plastic makes a nice change as you can see your juice easily, replacing the bung was slightly fiddly but I soon got the knack of it

Visually I found it very striking and very well contoured, the Aurora styling is high resolution and the coating on the graphics has an almost glass like feel to it. I have no idea what the coating is but it’s very shiny and high quality, it is not a fingerprint magnet either.

The mouthpiece is whistle tip style and is very comfortable. There is a narrow window so you can see your juice level if you tip it on its side. The Micro USB charging port is on the bottom corner and above that is a hidden LED light which changes colour with its two power settings and is also used for charging status. 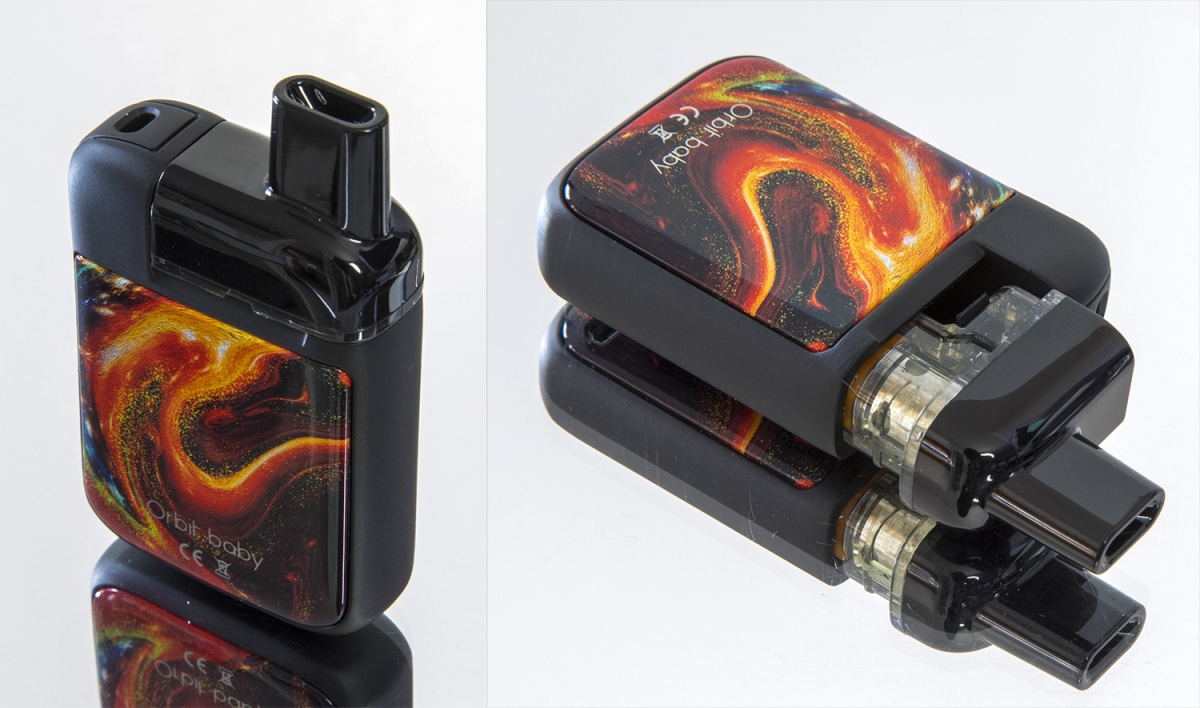 There is a lanyard slot on the top corner though strangely they did not include a lanyard. No biggie as I have a few ‘hanging around’ and the orbit really suits using a one, it has barely left my neck since I started testing it.

Ergonomics wise it feels superb, really comfortable and easily held. I found myself just twiddling it in my hand when I wasn’t vaping, stress relieving almost.

The pod system is draw activated with no buttons to press. The draw has a cut off time of eight seconds which I rarely achieved with its tight MTL draw. If you chain vape too long the overuse protection kicks in until it cools down. It has two power settings, which can be changed by puffing five short draws within five seconds.

When the battery is too low you will see the LED change to RED which means it's under 3.5 volts and needs charging. Though the battery is only 460mAh it lasts surprisingly well, I have been using it exclusively all day for three days and found it lasts me around five hours.

You can also vape while charging which temporarily stops the actual charging while in use.

Charging takes around sixty minutes and the LED remains RED while charging and turns off once charging is complete.

That’s all you need to do to operate it, simple as that.

Right then, now for the good part FLAVOUR!

From the very first draw I was really surprised, I thought I had already reached flavour nirvana but this little box of tricks delivers! Sometimes exclusively testing devices can be a chore, especially if its not as good as your current favourite device but this was an absolute pleasure. The draw is a good balance between tight to medium MTL (Mouth To Lung like smoking) with its 1.0oHm coil. The airflow appears to come through the coil and the tiniest of gaps between the pod and battery. Though it’s not adjustable I have no issues with that, it’s a perfect draw with no spitback or dry hits, and pure flavour that rivals my favourite MTL RTA’s.

With Sense including two of the same 1.0oHm coils, it is clearly aimed at MTL but I did try it as DTL (Direct To Lung – inhaling as you draw) and it was actually quite nice, restrictive but not enough to ruin the draw, and you still get that intense flavour.

Coil life has been excellent so far considering I have been exclusively hammering it, there’s been no drop off in flavour or darkening of eliquid. I am more than satisfied enough to have faith in buying more coils.

Not quite. Sometimes I get interrupted draws and switches in power levels. This is overcome by ensuring your puff is consistent as any dip will confuse it in to thinking you are changing the power level. The other problem, which is quite common on pods, is there is minor leaking as your juice level gets low. Removing the pod you can get juice around the contacts and worse still if juice gets into the draw activation sensor, though this has obviously been taken into account as the draw hole is raised so I didn’t get any juice inside the sensor, but it’s worth checking every time you fill up.

The other downside was the lack of lanyard which I wouldn’t have thought twice about but for the fact they designed a slot into the device. 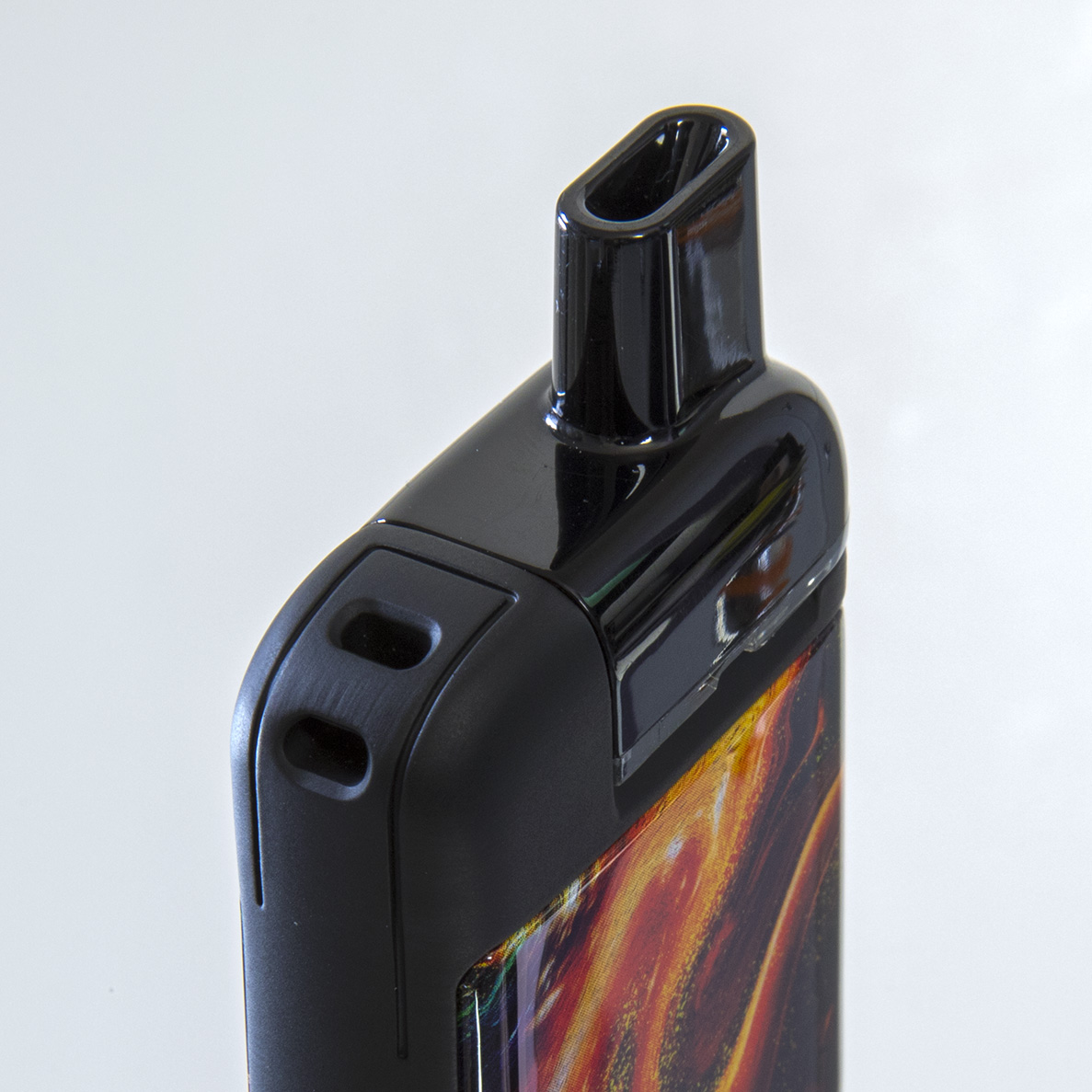 These drawbacks haven’t ruined it for me, I am totally hooked on this cracking little device. 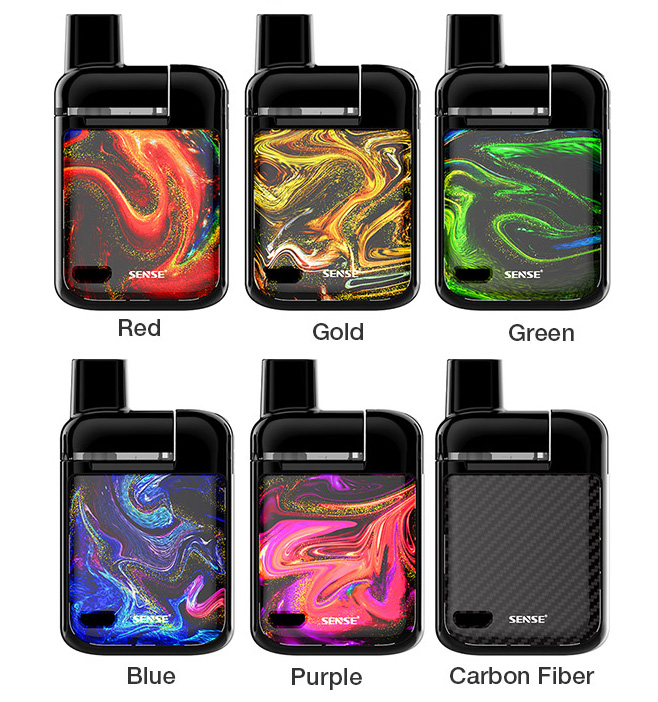 There are some really good looking colours and patterns to choose from. 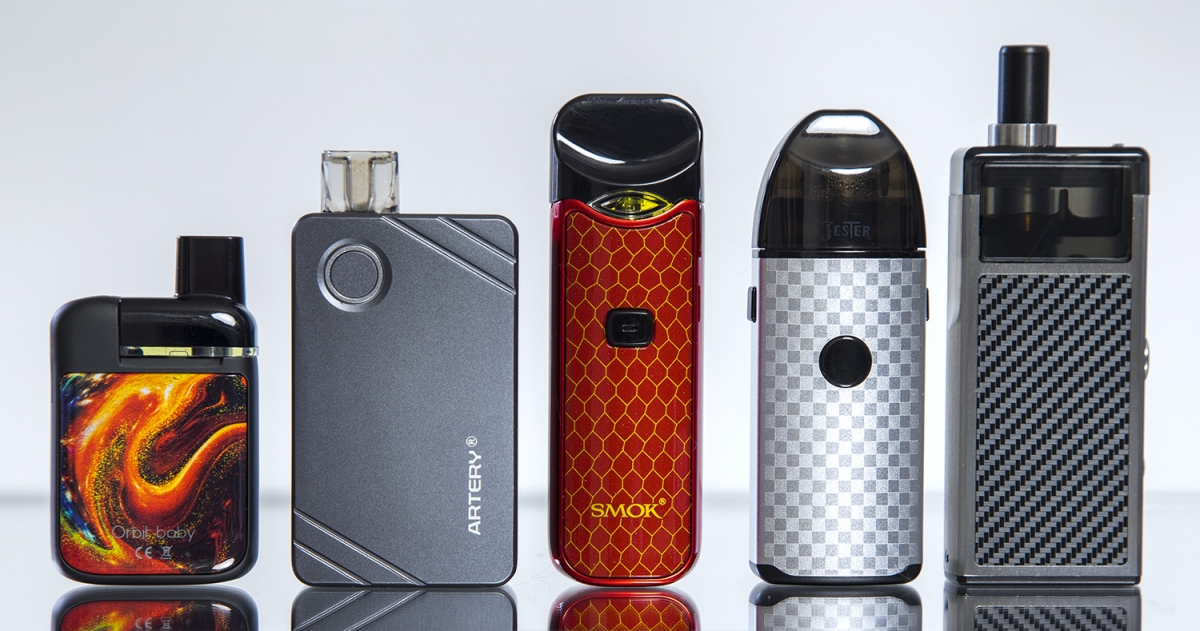 Artery Pal
It’s a tough call between these two as the Pal 2 is one of my all-time favourites and one I had to stop using to test the orbit. Going back and forth between the two, the Orbit Baby marginally edges it on flavour though the Pal 2 will still get used. There’s very little in it but I will vote for the Pal 2 as it has adjustable airflow and DTL and MTL coils available.

Smok Nord
Now there is no competition, the Orbit Baby is everything the Nord should have been. Smok simply don’t understand MTL and the airflow is awful. The coils are flavourful but wasted in too much air. The Nord has a larger battery capacity but they both seem to last as long as each other, perhaps the Orbit is more efficient – Orbit Baby wins by a country mile.

Vapefly Jester
My current absolute favourite in this line up BUT only with the RBA (Rebuildable Atomiser), the stock coils are very good but not as good as the Orbit Baby for flavour. Again the Jester stock coil has adjustable airflow and easier to use power adjustment, but it doesn’t have style and ergonomics of the Orbit Baby. The Orbit wins for stock coils (the RBA beats it though).

Smoant Pasito
Now this is an unfair fight on paper, the Pasito has a lot more going for it and is more versatile with its five power levels, adjustable airflow, button operated, magnetic pod, MTL & DTL coils as well as the superb RBA deck, but when it comes down to flavour on the stock coils the Orbit Baby wins, however with the RBA deck the Smoant clearly is the winner if you like building tiny coils, as mentioned earlier this is an unfair comparison as the Pasito is more in the AIO (All In One) class but I thought I would throw it in the mix.

With the relentless flow of pods, pods and yet more f**king pods, it takes something a bit special to stand out these days. When I looked at the Sense Orbit Baby on the web prior to receiving it, I had quite a closed mind and expected more of the same. Boy was I wrong, and I am very impressed how Sense have managed to raise the flavour bar even higher, not only that but the device itself is very pleasing and top quality – I highly recommend this pod system.

More often than not after testing and reviewing pods or tanks, it’s rare I bother buying more coils for them as something better always comes along. Not in this case as I can see me using this cracking device for a long time to come. Just when I thought pods had reached the limit, along comes something like this and it is on my highly recommended list. 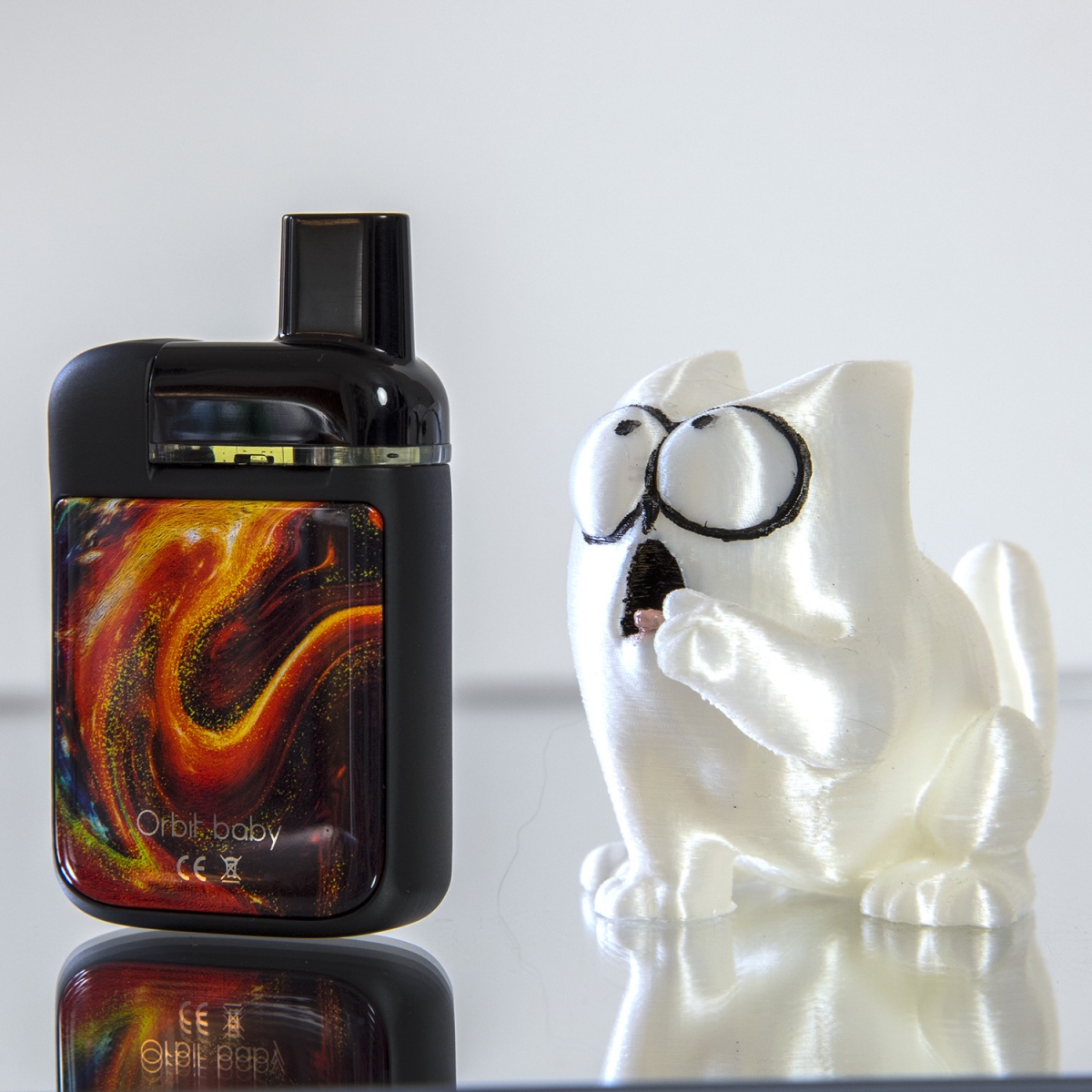