OXVA asked if we’d be interested in taking a look at their new 2 in 1 kit, the OXVA Velocity, which they bill as both a “pod kit” and a “full 21700 mod”. Having previously reviewed their Origin X kit a few months ago which was quite impressive, but perhaps held back slightly by the use of an 18650 battery and a 4.2 volt output, I was keen to see what they could do with a 21700 setup. 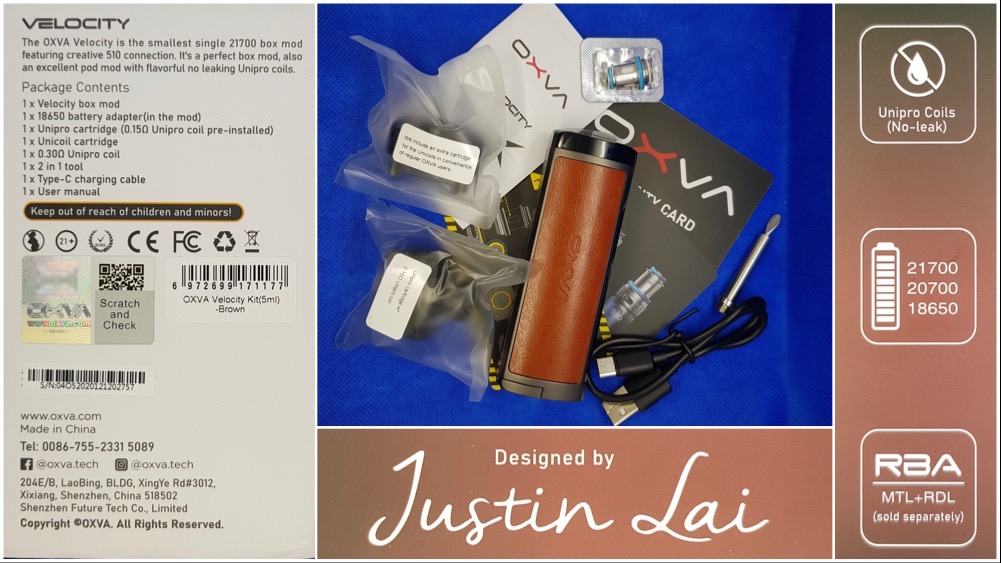 The OXVA Velocity is available in six colour variants (two leather, one carbon fibre, and three IML prints), and the gunmetal and brown leather version was sent out for review. The Velocity comes with a standard 510 adapter plate installed so you can use it as a compact 21700 mod straight out of the box, but there are quite a lot of other items included here as well. Besides the obvious usb-c charge cable and user manuals etc, you receive not one but two pods, a 510 plate removal tool, and an 18650 battery adapter which is hidden inside the battery tube.

The first pod is for the original Unicoils used in their previous products (no coils are supplied for this though), and the second pod is for use with the new UniPro series of coils. OXVA claim these have been enhanced for more clouds and flavour with no leaking or spitback, and there are two coils included for this pod. If you’re not interested in the pod side of the equation as seen here in the “2 in1 kit”, it looks like the Velocity will also be sold as a “box mod” with the pods excluded from the packaging which may be a little cheaper. If you’re planning on buying this, be sure to check carefully which kit you’re putting in your basket!

First things first, let's deal with this as a 21700 mod as it comes out of the box this way. 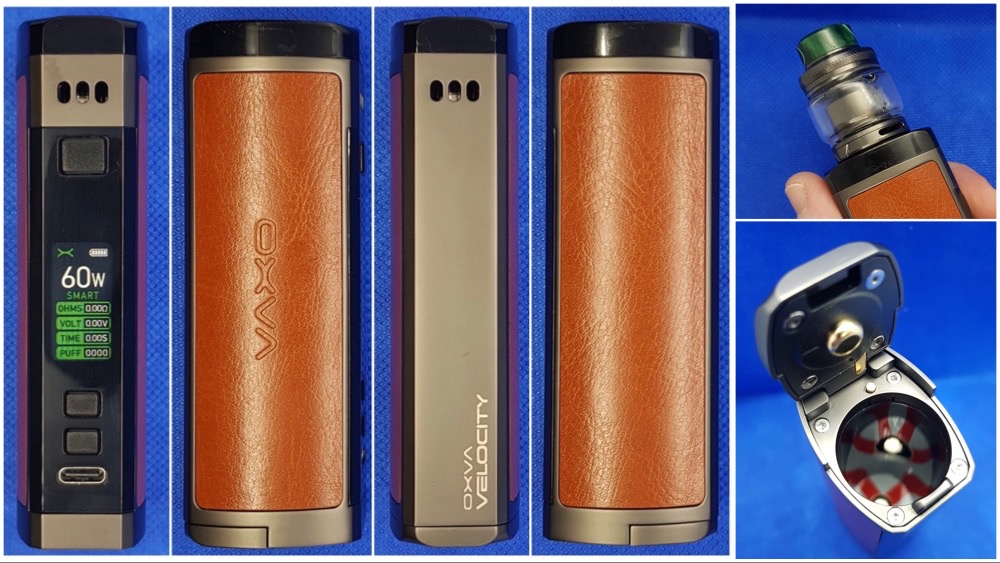 The OXVA Velocity looks quite nice as a standalone box mod and apart from the air flow holes on the front and back sides, you’d be hard pressed to tell that this is a “pod mod” from a casual glance. OXVA claim this is the “smallest single 21700 box mod featuring a creative 510 connection” but that’s not strictly true. I have several single 21700 mods that are a similar size but are shorter due to the extra room needed up top for the pod/510 adapter to sit in, and the overall dimensions are almost exactly the same as a similar kit I reviewed not too long ago. However the materials and general fit and finish feel much better here. It’s still a very compact unit and feels good in use with those leather panels affording a comfortable grip, and all the buttons are well positioned with zero button rattle. Additionally there’s the almost obligatory colour themes for the bright LED screen, and I changed mine to the orange theme to match the leather panels.

The battery door is clearly marked with a spring loaded contact, this closes well and I've had no issues with it coming open unexpectedly. This passed the oversized Vapcell 21700 test easily but I did struggle to close the battery door with an Avatar 21700 which is taller than standard (70.5mm). Smaller batteries like a 20700 also worked well with no noticeable battery movement in use. Should you need to charge the battery via the usb-C port, this promises a 2.5 amp charge rate. It maxed out at 2 amps on my test but this is a limitation of my test setup so I’m inclined to take OXVA's word here.

The Velocity features OXVA’s new photon chipset which has true buck/boost capability which means this works well as a proper box mod thanks to its 8 volt output. You, of course, get all the safety features you’d expect from a modern kit as well. Output is adjustable in 1 watt increments in wattage mode or 0.1 volt increments in voltage mode. Additionally there are two wattage modes available, “smart”, which will limit the maximum output depending on your build, and “power” which will give you the full 100 watts. Performance has been great with quick response times from the board.

The 510 adapter accommodates 25mm atomisers with ease, you may even get away with 26mm here as well. Unlike most other “pod mods”, the 510 adapter is held firmly in place although there is some slight movement here. This doesn’t seem to affect the performance though as in two weeks of continuous use, I’ve only had it ask me once if a new coil has been fitted suggesting a temporary loss of connection. This means that if you’re the person who likes to use a dripper and take the top cap off to paint your wicks then this is possible. So how exactly do you remove the 510 adapter? 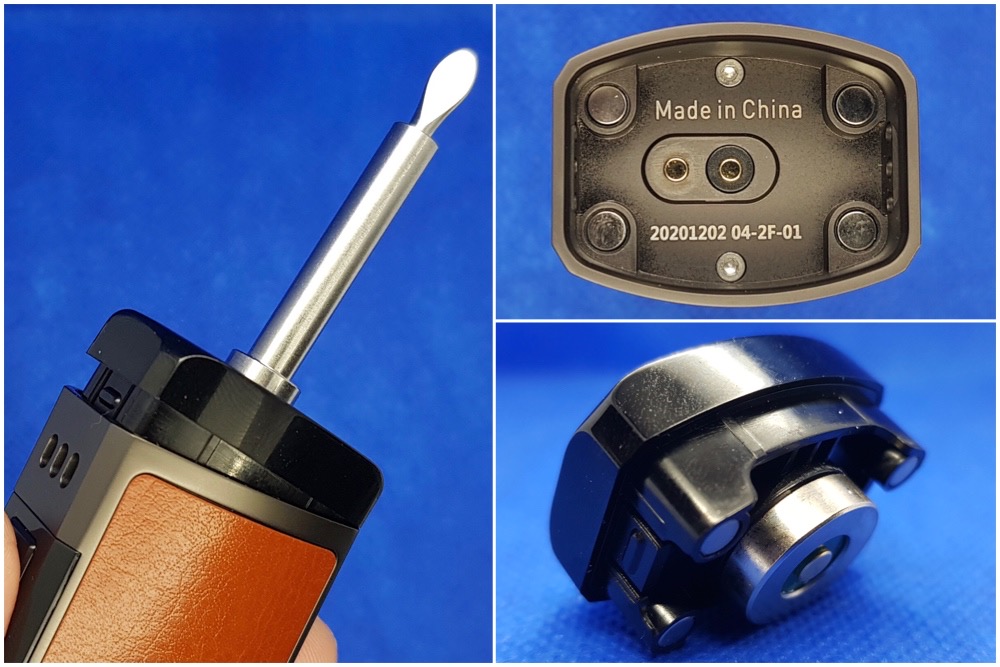 This is where that 510 puller tool included in the box comes into play, put this into the 510 thread and then lever it to one side to release the retaining clips on each side. You can of course do this with an rta but it’s much easier with the included tool. The clips, although sturdy, are plastic so how well these will hold up long term is debatable, but the adapter also has magnets on the bottom so it should continue to work even if this does happen. On a side note, although I’ve seen spare pods available I haven’t spotted a spare 510 adapter listed anywhere so be careful not to lose it! 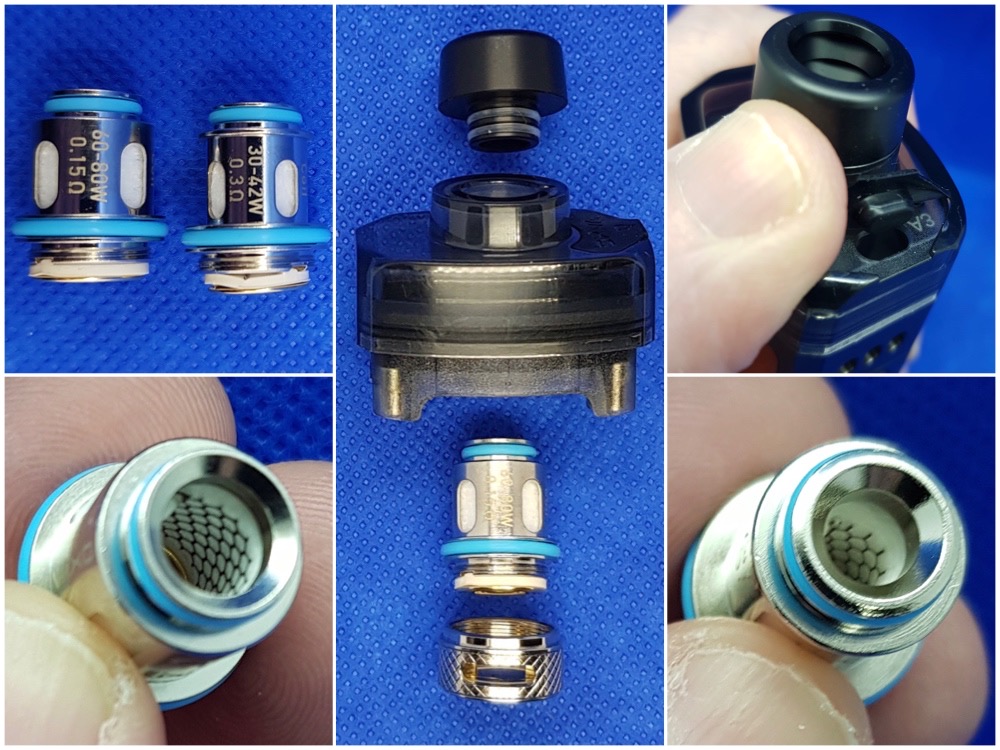 On to the pods now. They are constructed from PCTG so should be resistant to most e-liquids and feature a removable 510 drip tip with a 5ml capacity (2ml for TPD regions). It’s held in place very well with the four magnets. The fill port is on top so there’s no need to remove the pod every time you need a refill, this lifts up like a flap and I’ve had no issues at all with this in use and although the pods are lightly tinted, you’ll be glad to hear that you can still easily see how much e-liquid is available. Coils are press fit from below and feature a removable airflow ring, so be sure not to throw that away when changing coils! As no coils were supplied for the Unicoil pod, I concentrated on the newer UniPro pod with the two included coils.

Both coils are a mesh design with a fairly open draw. The coil material isn’t stated anywhere either other than a rather unhelpful “mesh” (mesh what exactly!). Flavour from both coils was outstanding, the 0.15Ohm coil lasted a good ten days but the 0.3Ohm coil was toast after just five days so they seem to be a bit hit and miss on the longevity side. OXVA claims that these coils have been designed to be leak free and that has been my experience with no leaking or condensation build up under the pod.

I found the quoted wattage ratings on the previous Unicoil system to be a little over ambitious with the coils actually struggling at those ratings, they in fact seemed to perform best about 10 watts below those ratings, and the 0.15Ohm coil showed the same behaviour, performing best in the 50~70W range (rated 60~80W), and it became uncomfortably warm at 75W. The 0.3Ohm coil is rated for 30~42W and this seemed much more accurate. 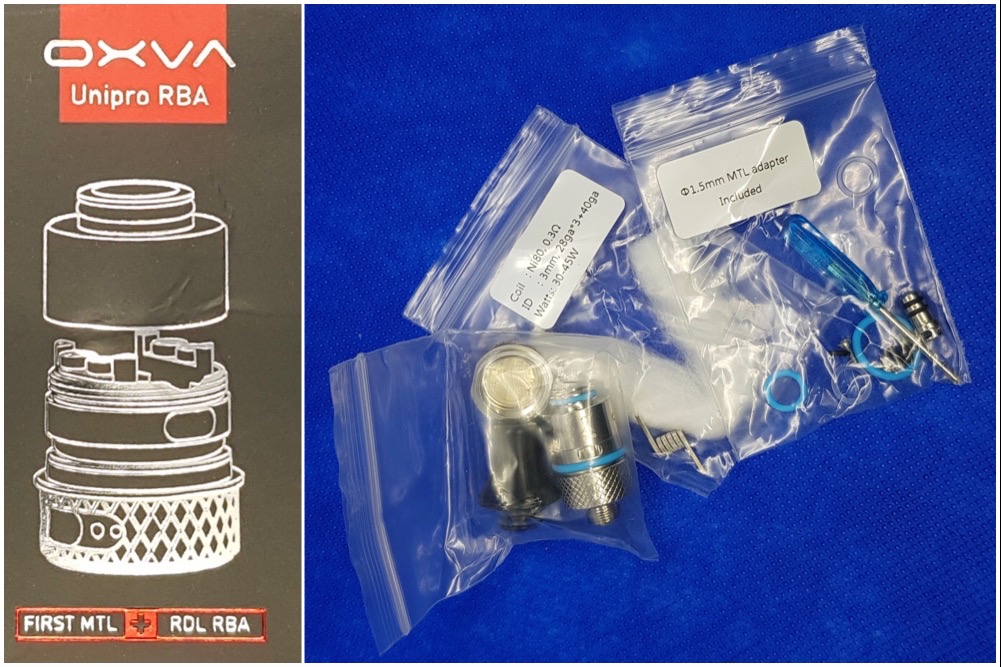 OXVA also sent out the new UniPro RBA coil for me to try. This comes in a small cardboard box but there’s a surprising amount included in the three bags inside. There’s obviously the RBA itself which comes with the 510 adapter preinstalled so you can dry burn your coils, along with the airflow control to use in the pod, and a “MTL” drip tip (this still has a fairly wide bore). A second bag has spare o-rings and a MTL airflow pin to restrict the airflow under the coil, and in the final bag there’s a premade nichrome clapton coil with some cotton. 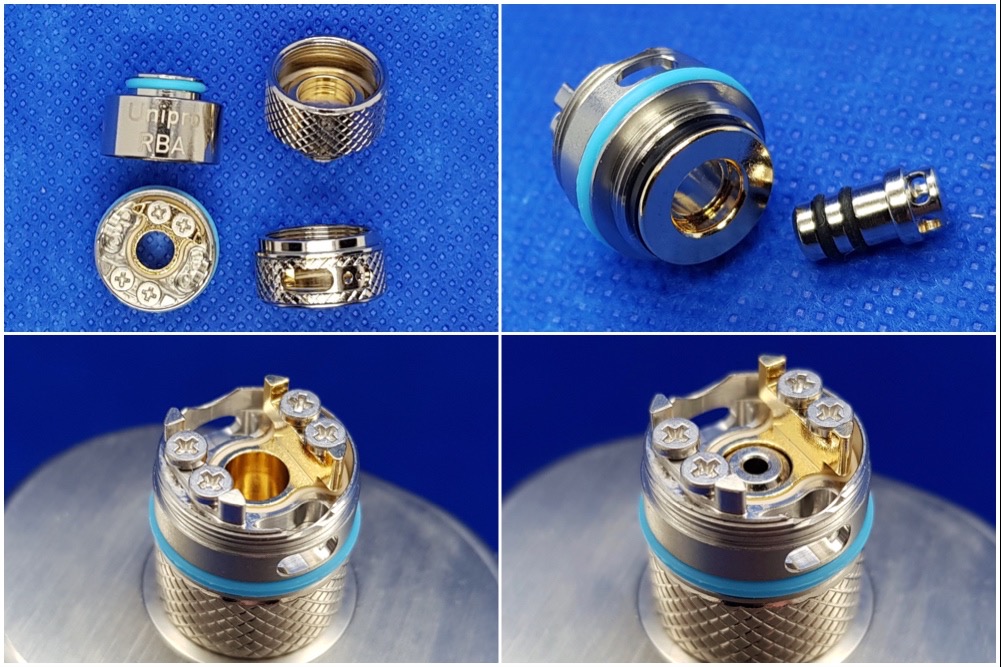 The airflow reducer pin is press fit from the bottom of the coil, I’d suggest using some e-liquid on the o-rings here as it’s quite a tight fit. This gives you a 1.5mm airflow under the coil which means that this can do a proper MTL draw. The AFC is similarly tricked out with 0.8, 1.0, 1.8 and 1.5mm airflow settings available. 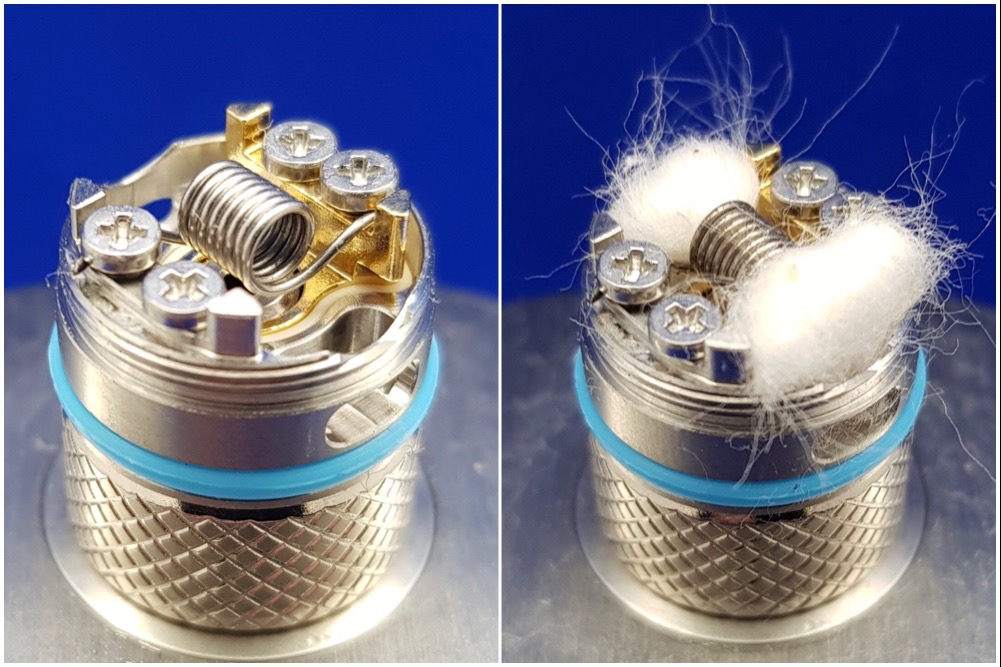 I thought I’d start out with a simple kanthal round wire build on the MTL side and this came out to 0.77Ohms. Smart mode limited me to 15 watts here so I changed over to power mode as I felt this wasn’t enough, this allowed me to go up to a heady 20 watts and I got a surprisingly competent MTL vape. Swapping to the 0.8mm airflow hole was also good, so all you MTL fanatics should be happy here. On a side note, the afc ring also also works with the stock coils.

One thing to note here is that you need to make sure that you clip your leads really tight into the screws as there’s pretty much zero room between those and the bell cap. Wicking was easy though as there’s plenty of room in the wick channels for such a small RBA. 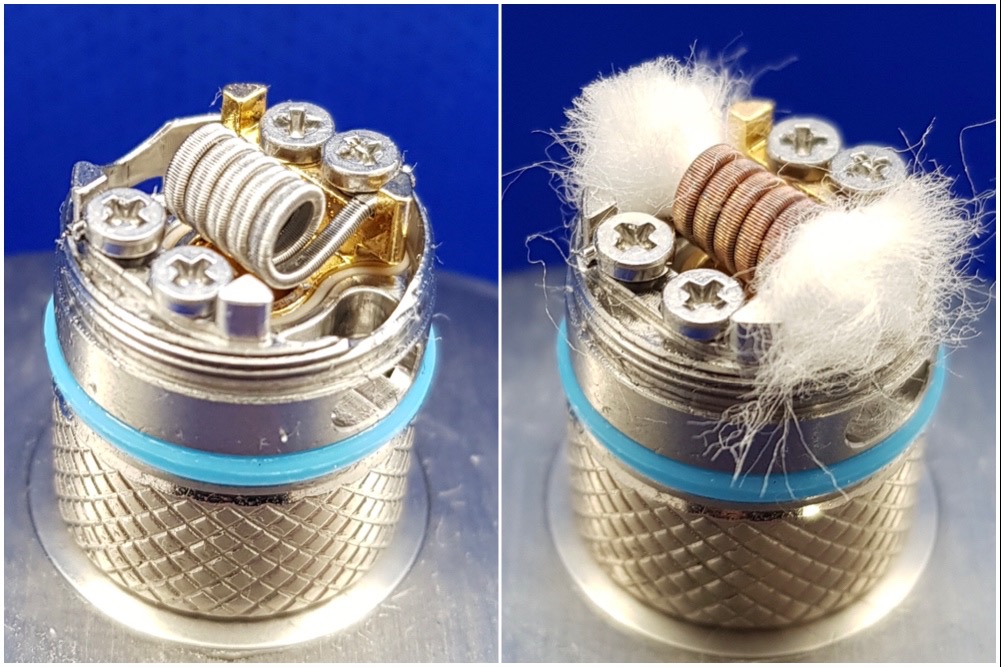 I didn’t want to use the included coil as it’s nichrome so I found a similar SS316 one to use instead which came out to 0.25Ohms. Once again, clipping the leads as tight as possible to the screws is necessary, this seems especially true around the negative post. The smart mode limited me here to 80W, but I only needed about 45W to get a stellar vape from this anyway.

If you want to use the Velocity as a pod mod then this RBA section should be high on your “to buy” list.

OXVA have knocked it out of the park again with the Velocity 2 in 1 kit, it really does perform well as both a pod or a mod. Whilst I was fairly impressed with the build quality on the Origin X, this seems to have taken another step up again, it looks great and feels solidly put together. The new photon chipset helps out a lot here as well with its true buck/boost capability making this a flexible option when using it as a box mod. I heartily recommend this and very much look forward to seeing what they come up with next.

Many thanks to OXVA for sending the Velocity kit out for review. 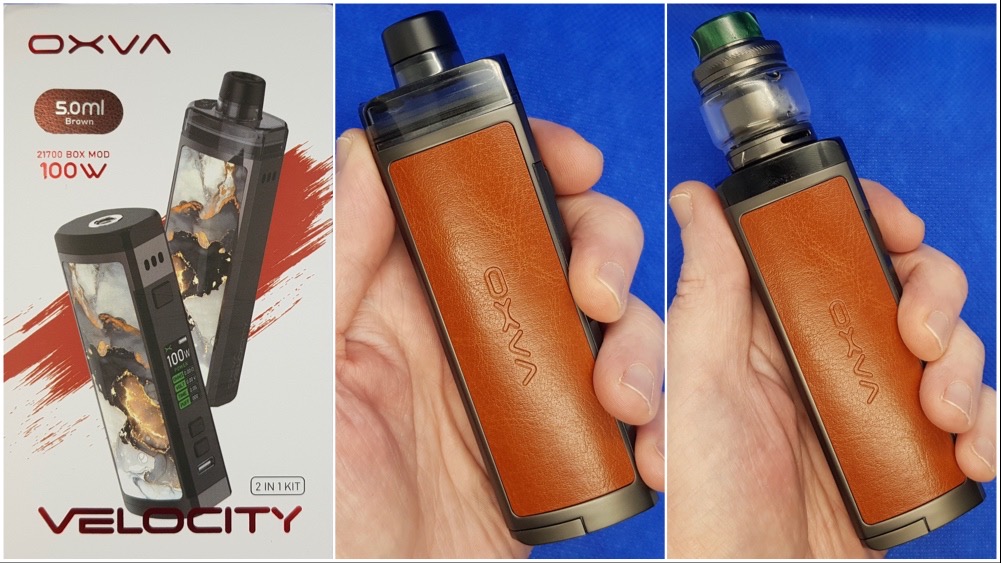