Another day, another pod kit… wait don’t go just yet! This time I’m looking at the Oumier Voocean 40 kit which won the “most upcoming product” at the recent Vape Idol awards, one of the most influential vape award events held in Malaysia. Oumier are better known for their budget friendly wasp series of atomizers. Intrigued, I asked our friends over at Sourcemore if they could send over this interesting piece of kit for review so I could judge for myself. 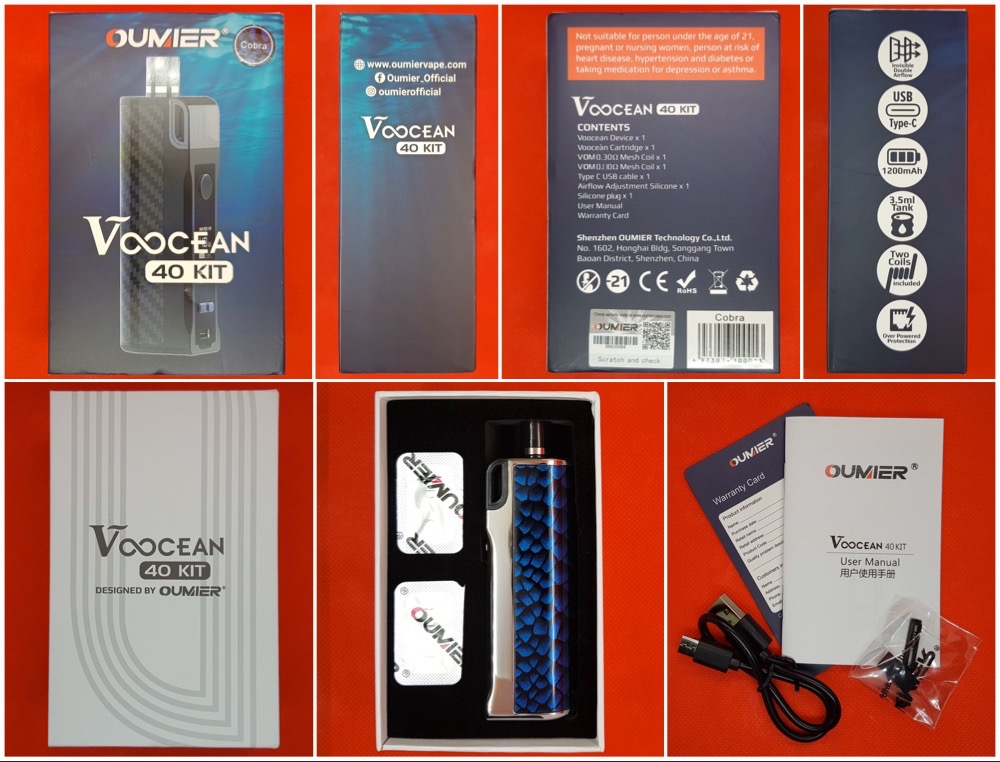 The Voocean 40 kit comes with an outer sleeve with a photo of the device in carbon finish on the front and a small sticker indicating actual chosen colour. There are plenty of bullet point infographics on the side along with a list of contents on the back. Removing the sleeve, you’re presented with a white box with some Oumier Voocean 40 kit branding. Inside, you find the kit along with two coils on the top layer and underneath this is a smaller box with some documentation, a usb-c cable, a spare bung for the pod and a silicone airflow restrictor. 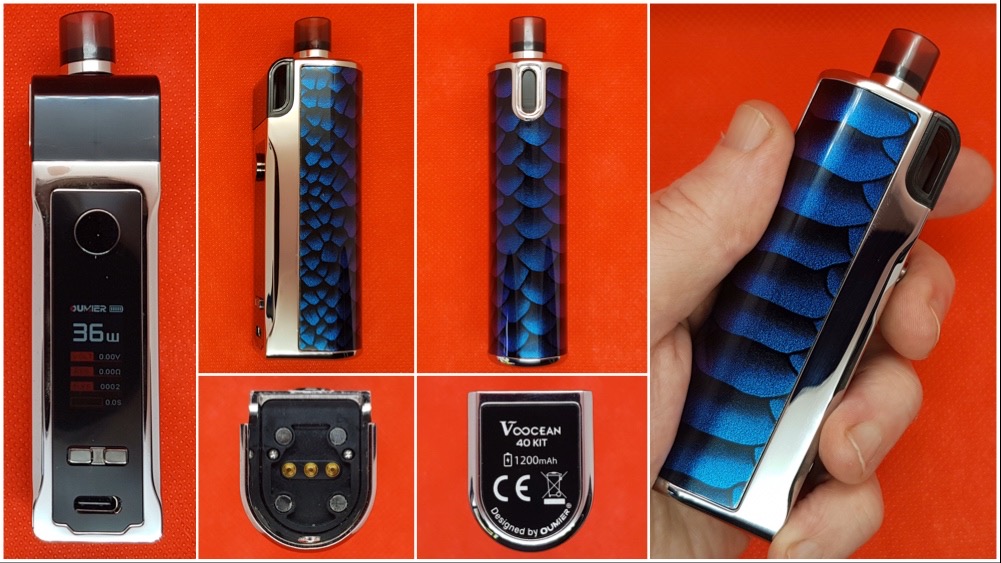 My Voocean 40 kit came in the “Cobra” finish which has a polished chrome chassis and an iridescent cobra skin design which changes colour depending on the angle you’re viewing it from, straight on it’s blue but angle it slightly and it changes to a deep purple. There are three other colours to choose from (carbon fibre, cube, and wave) and these all have a black frame instead. The main chassis has a zinc alloy construction and, weighing in at 153 grams, this is quite a bit heavier than many similarly spec'd pod systems. This results in it feeling a little too heavy for a shirt pocket, but it remains light enough to comfortably fit in a trouser or jacket pocket.

There’s a 0.96 inch colour screen up front nestled between the power and up/down buttons along with the usb-c charge port. All the buttons have a nice positive click to them and I’m happy to report there is no button rattle. The sides have a nice curve towards the back of the frame which makes this super comfy in the hand, and I found the button position perfect for either trigger or thumb firing, I think Oumier have got the ergonomics figured out pretty well here. There’s a window cut out on the back to allow you to view your eliquid levels, however due to the darkly tinted pod, I found this of limited use except in bright sunlight.

The colour screen is reasonably bright and visible outside and the information is all clearly laid out, you will need your reading glasses for anything other than the wattage though. Out of the box, the screen has a red theme but you can change this by pressing the fire and plus button and I settled on a blue theme which suited the cobra colour better.

As is common with most of these pod kits, it’s a fairly simple board with just wattage adjustments, there’s a maximum 4 volt output as well which suggests there’s no boost capability although there are the full range of safety features for peace of mind, and the kit will limit the available power depending on which coil you have installed. Controls are simple as well, five clicks on/off, fire and down will clear the puff counter, up and down will lock the wattage, and pressing all three buttons will lock the power button.

The pod is cradled in the upper section of the frame and removing this reveals four magnets to hold the pod in place along with three spring loaded contact pins which feel fairly robust. Beware low flying pods though… yes the Voocean 40 failed the shake test and it definitely feels like stronger magnets would have been a good idea here! As the pod is only enclosed on three sides, it also means you can knock the pod out by pushing on the drip tip as well which I soon found myself continually fidgeting with it. Despite this, the pod stays in place fairly well, just don’t make a habit of waving it about willy nilly or to clear a flooded coil for example.

Oumier makes a bold claim on the Voocean 40 page that you can plug the kit in for just 30 minutes and come back to an almost full battery thanks to its usb-c fast charging, so it’s time to put that to the test. The Voocean 40 did indeed charge at the specified 1.6 amps and after 30 minutes I had a recorded charge of 800mAh, total charge time was 57 minutes with a final recorded capacity of 1202mAh. This brings the Voocean 40 kit into that sub 1 hour charge time and the 30 minutes quick charge will get you a decent amount of power if you’re in a rush. 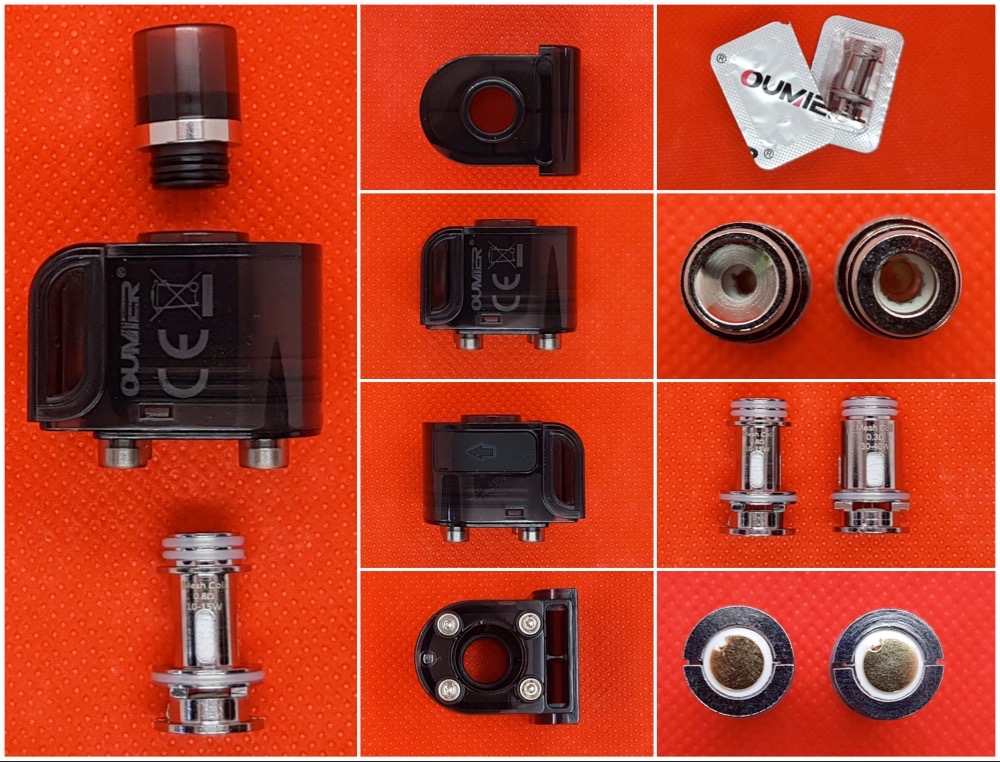 The pod uses push fit coils and holds 3.5ml of eliquid (2ml for TPD regions) and has a removable 510 drip tip, you are slightly limited in using your own drip tips as the 510 catch cup is slightly raised but I found the included drip tip comfortable enough in any case. If you’re thinking that “loop” at the front of the pod looks like a convenient spot for a lanyard then think again, this is actually the concealed airflow and there’s a solid wall between the two halves. You can also insert the supplied silicone airflow restrictor on the underside of this portion to give you a small degree of airflow adjustment. The fill port is located on one side but despite it having a fairly generous opening I still found it prone to air locking if I wasn’t paying attention, taking your time whilst filling helps here.

Coil material isn’t mentioned anywhere in the documentation, or online, so I contacted Oumier directly and they were very quick to reply advising me that the coils are nichrome which you may want to take into consideration before purchase if you have any nickel sensitivity. I then asked if they have any plans to release any other coil options for those that do have any nickel sensitivity and I was told that they may look into that or possibly release an rba head as an optional extra further down the line. At this point I’d like to commend the hardworking sales team over at Oumier for both how helpful they were and how quickly they got back to me with the relevant information.

I decided to try the 0.8Ω coil first which has the thinnest bore of the two coils and is only rated for 10 to 15 watts. I was anticipating a mouth to lung experience, however I found it was quite airy, almost bordering on a restricted direct lung vape. I even tried the included bung which is supposed to restrict the airflow but found in practice it made little difference, which means that any restriction is coming from the inner bore of the coil head itself. Also having anticipated that tighter draw, and taking into account that Oumier recommends this coil for nic salts, I put an 18mg nic salt eliquid in here which was definitely a mistake as my head was soon spinning! Once I’d dropped down to 6mg, I was much happier (but 9 to 12 mg would probably be a better match), and flavour was outstanding after a short break in period. One other aspect of this coil, thanks to its low default power setting of just 13 watts, is great battery life with around 500 one to three second puffs so it should get you through most of the day.

Onto the 0.3Ω coil, this has a much larger bore and is clearly aimed at a restricted direct lung vape. It’s rated for 30 to 40 watts and defaults to 35 watts which I found to be perfect especially with the airflow restrictor in place which did make an appreciable difference this time. Flavour was again really crisp and clean, and I’ve had no leaking or condensation under the pod with either coil. Obviously with the higher power demand for this coil, battery life is going to suffer with about 200 one to three second puffs on a charge. Luckily there’s that fast charging capability to compensate.

Coils look to be affordable with Sourcemore listing them at just $3.50 for a pack of 5 coils. 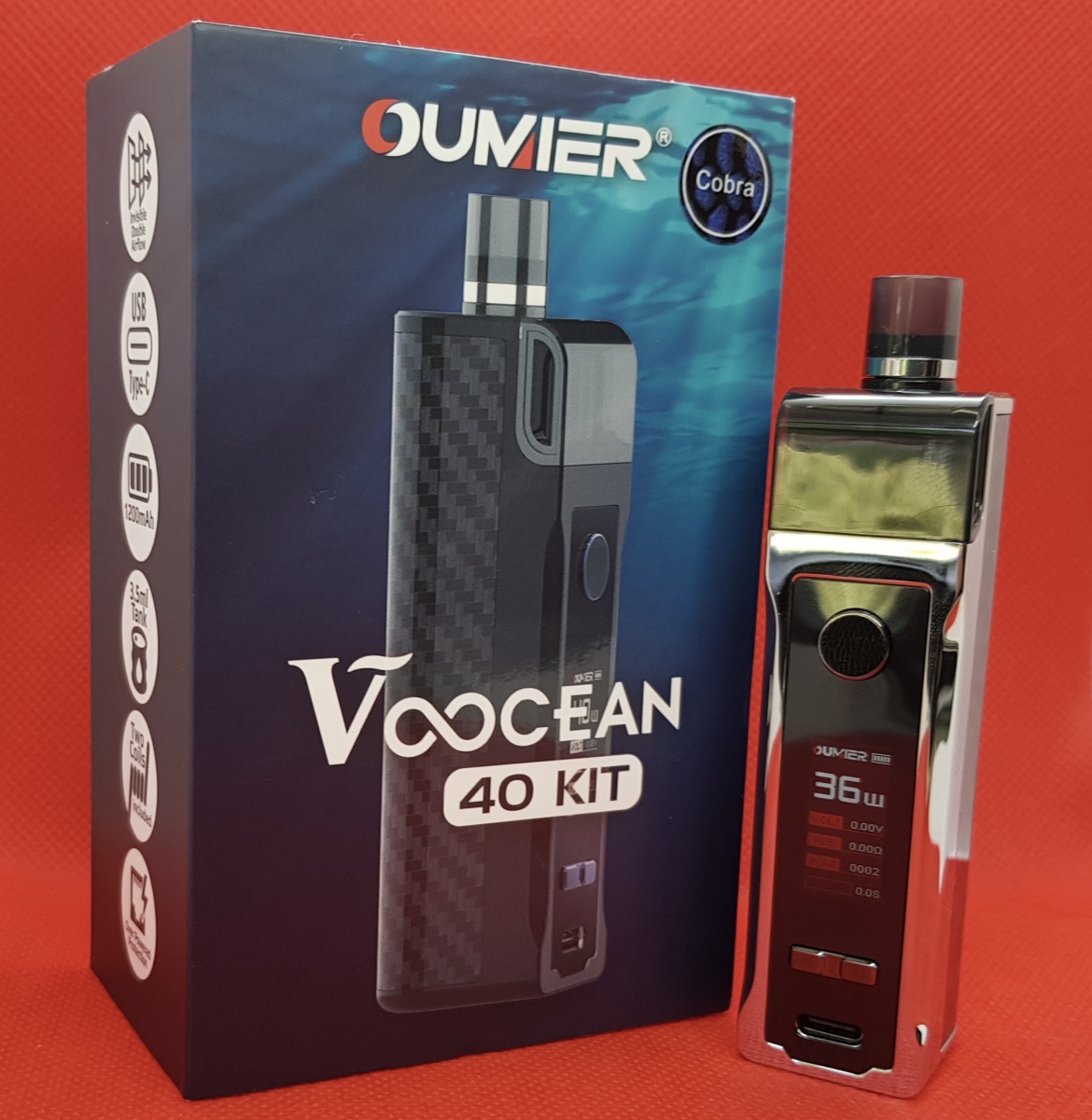 This is definitely a stylish entry into the pod mod arena by Oumier and they’ve done a fairly good job with the coils in terms of flavour reproduction. Anyone looking for a tight mouth to lung draw will probably come away a little disappointed, but if you like a restricted direct lung vape then there’s a lot to like with either coil, just so long as you don’t have any nichrome/nickel sensitivity that is!

Many thanks to Sourcemore for sending the Oumier Voocean 40 kit out for review, and as an added bonus they even gave me the discount code “OV40” for you to use which brings the price down to just $19.99. 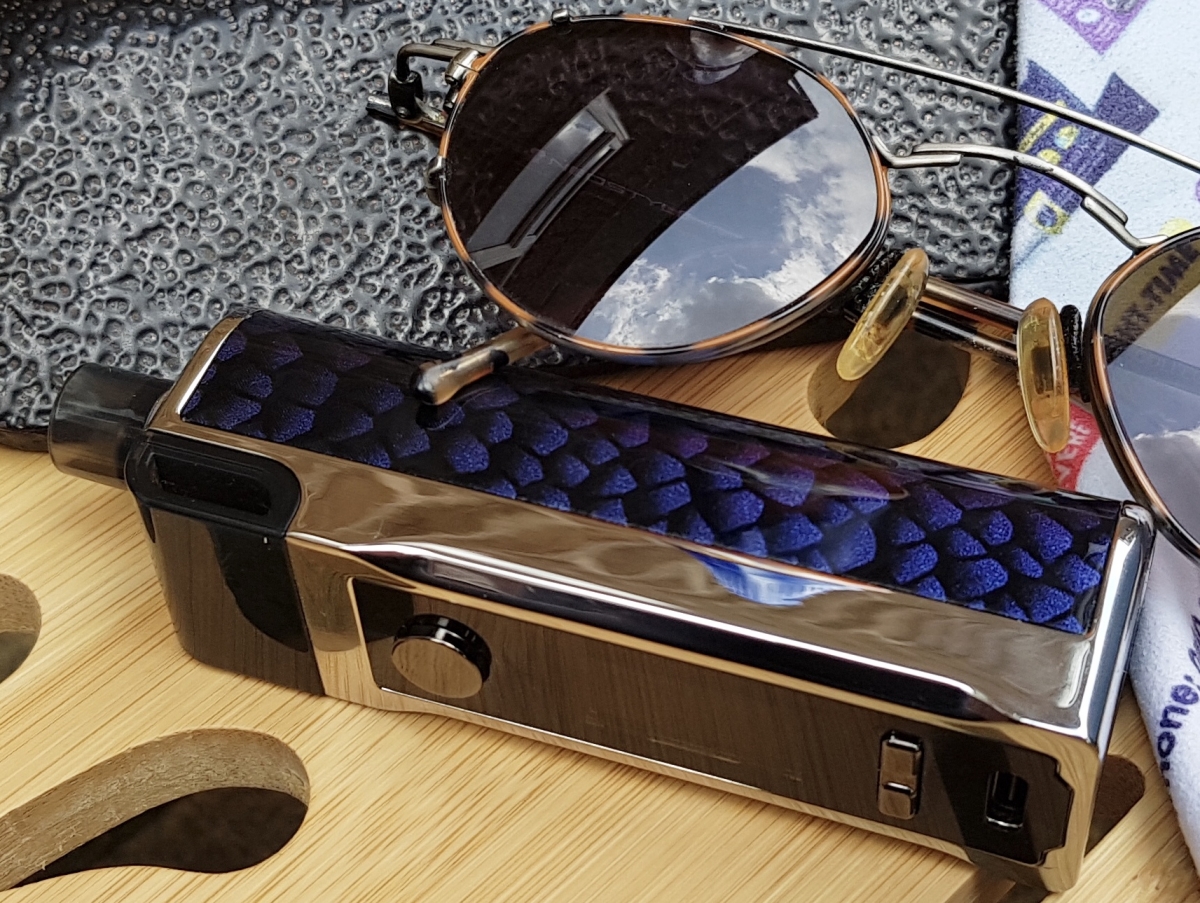