Innokin’s latest pod kit, the Sceptre, certainly looks pretty cool and the name sounds natty too. On the face of it, there’s not much Innokin-vation going on here, but below the surface it appears to be a well refined bit of kit. 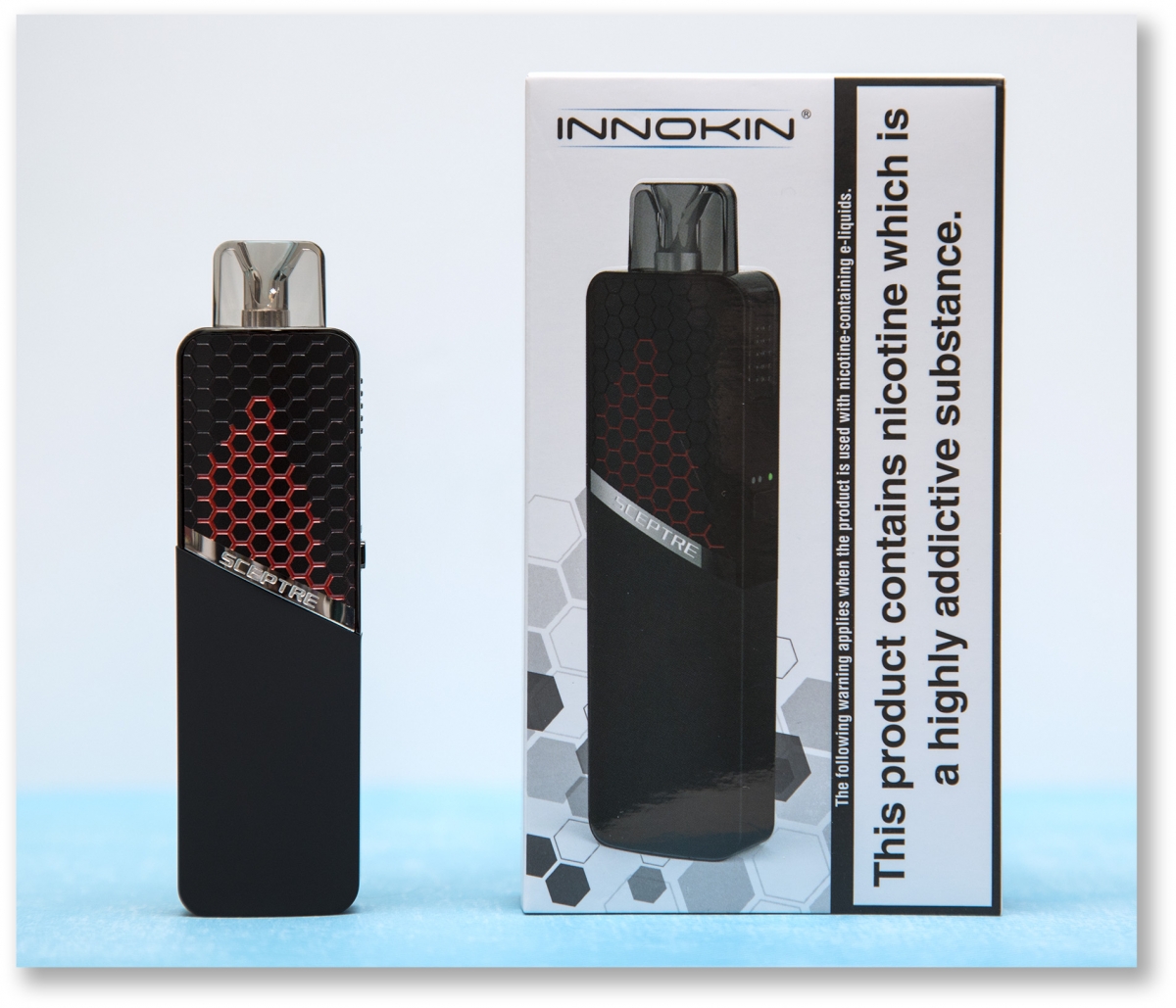 (As usual the TPD claims of including nicotine are false)

I’m going to try something a little different with this review and make it more photos/less text, they say a photo speaks a thousand words, so I will let them do the talking and only comment on the parts where a photo doesn’t.

The Sceptre comes in a rather cool and clean looking bi fold box inside the sleeve, the pod in one side, and the accessories in the other. 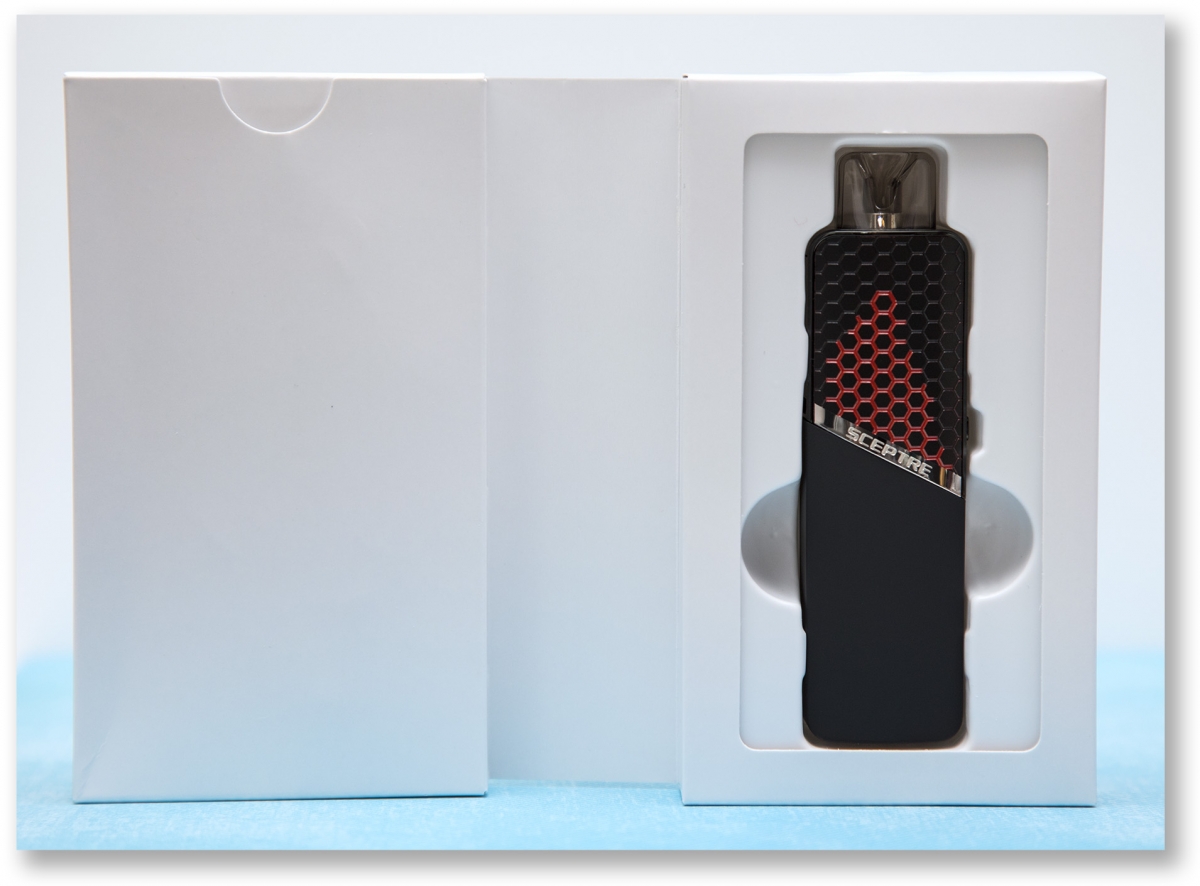 There are no surprises with the contents, the usual standard issue bits n bobs, no spare pod which is a shame. 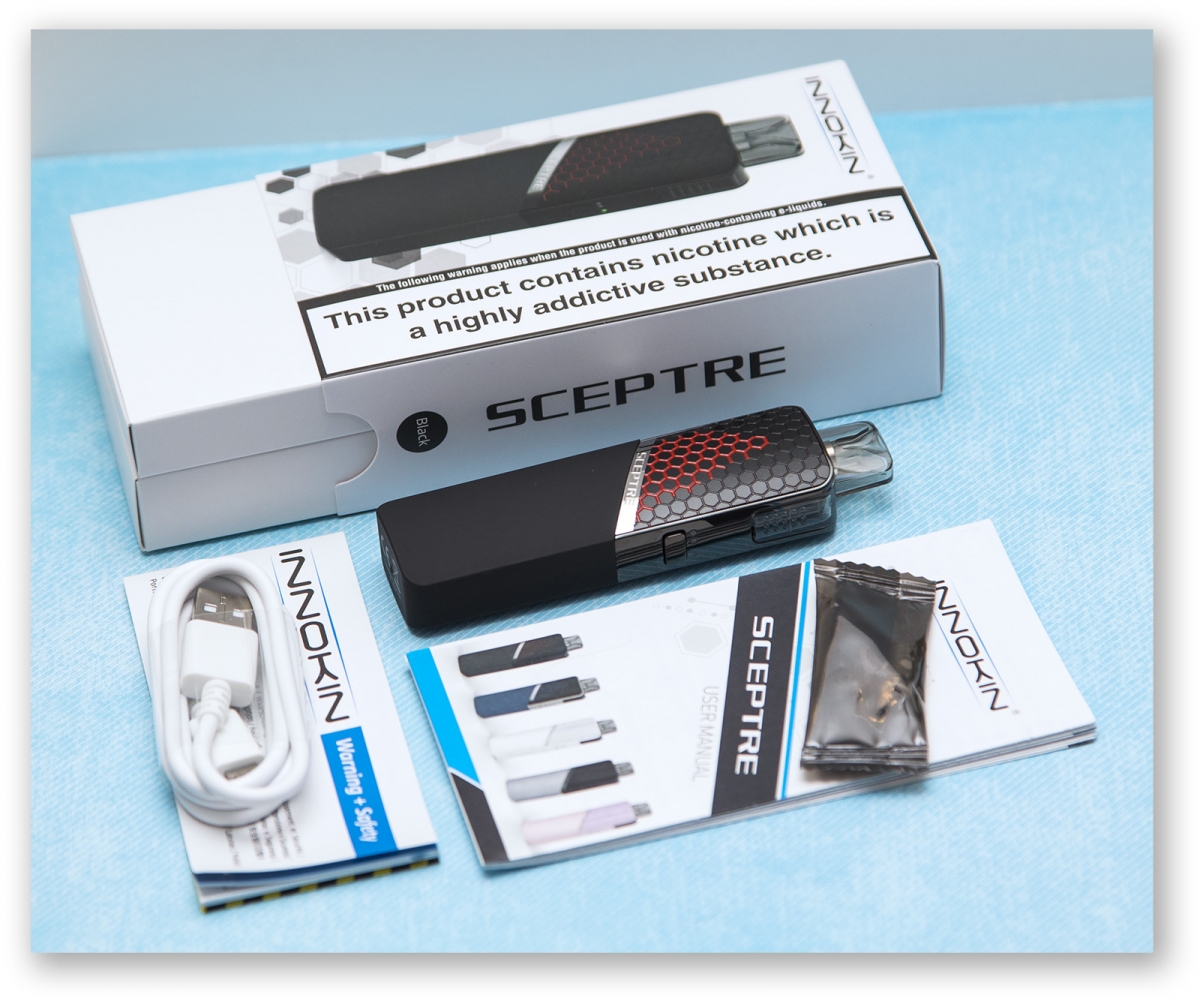 I think 86.41% of the Sceptre’s appeal is in the design (in a survey of 1), there’s something really classy and cool about it. 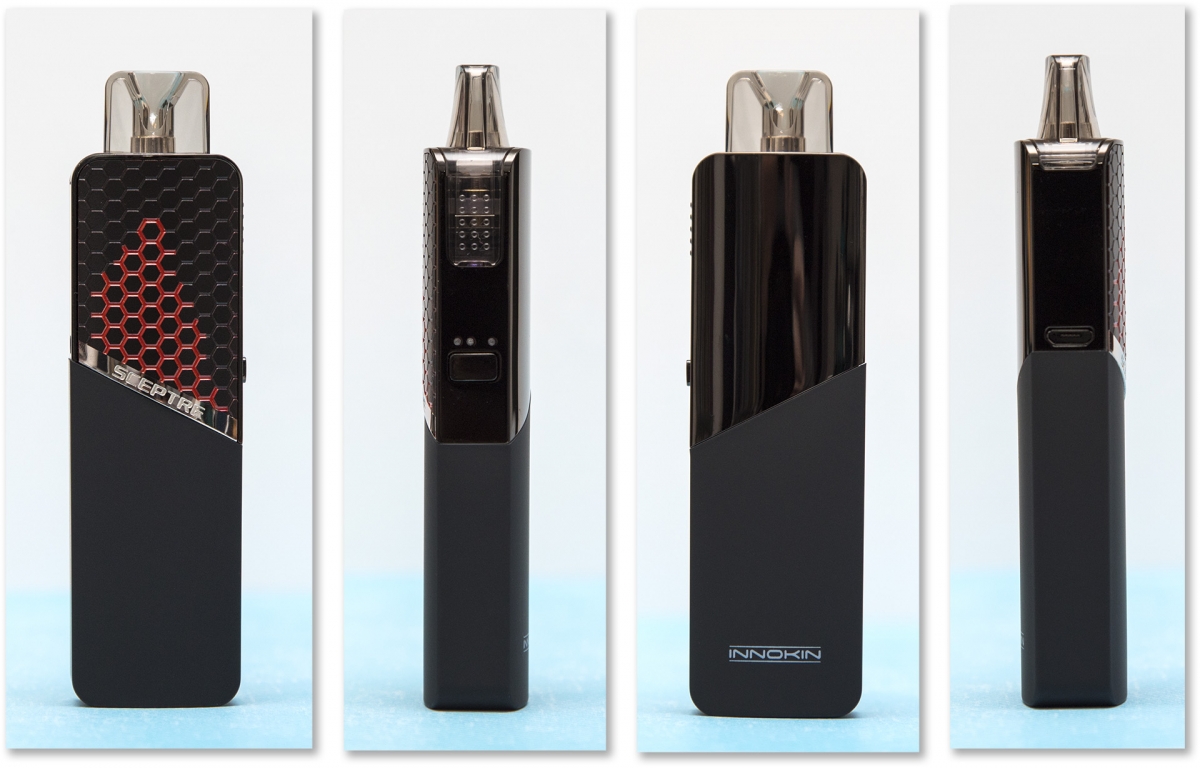 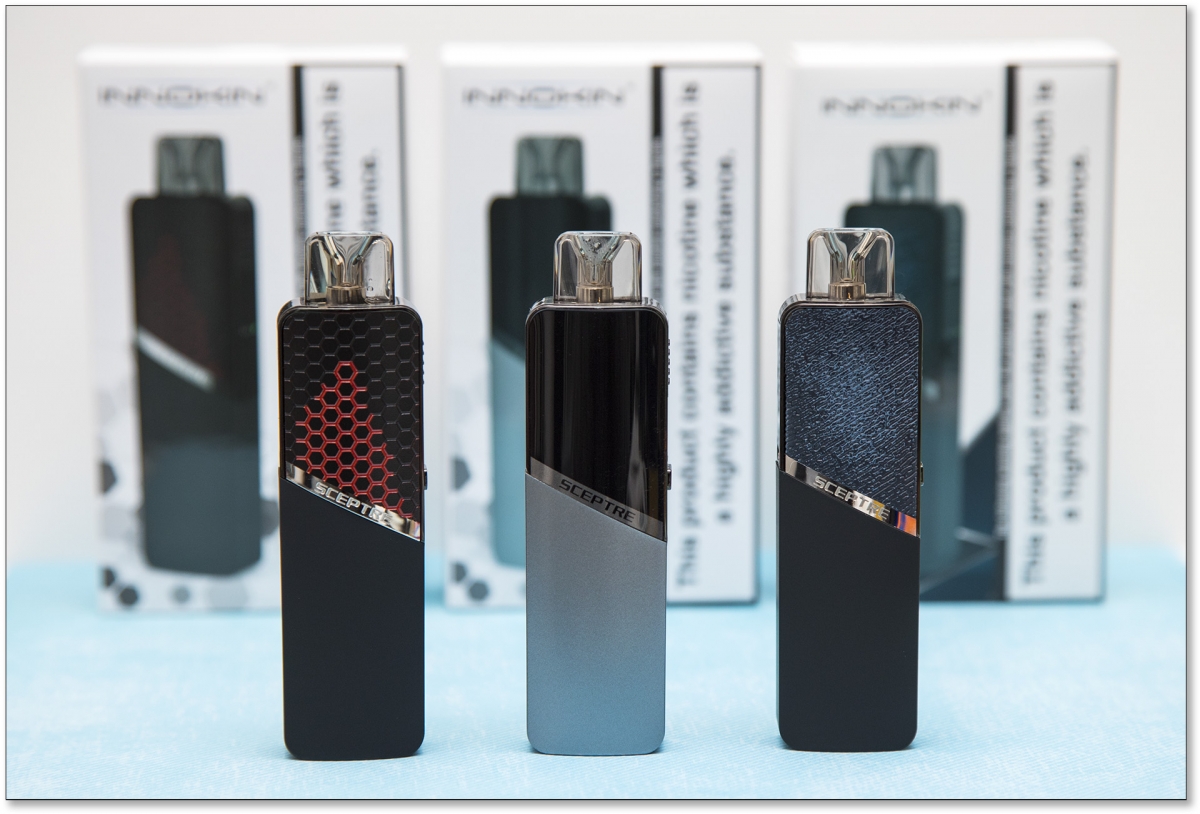 Even the ‘SCEPTRE’ metal dividing strip differs to suit the colour option.

The colours available look pretty classy, and there’s a choice to suit most tastes, in fact there are four that I would be happy with.

Interestingly, Innokin have clearly catered to a large part of the vaping public; female vapers. I am sure it will be very welcome as a lot of the competition often goes for more masculine styling and colours which ignores a large percentage of the market and can be less appealing to women that are looking to switch from smoking to vaping.

I’m not trying to sound on-trend ‘inclusive’ here, it just makes sense. To balance it out, here’s a sexist joke (Disclaimer, Potv does not endorse this joke, all complaints should be made direct to Si!): 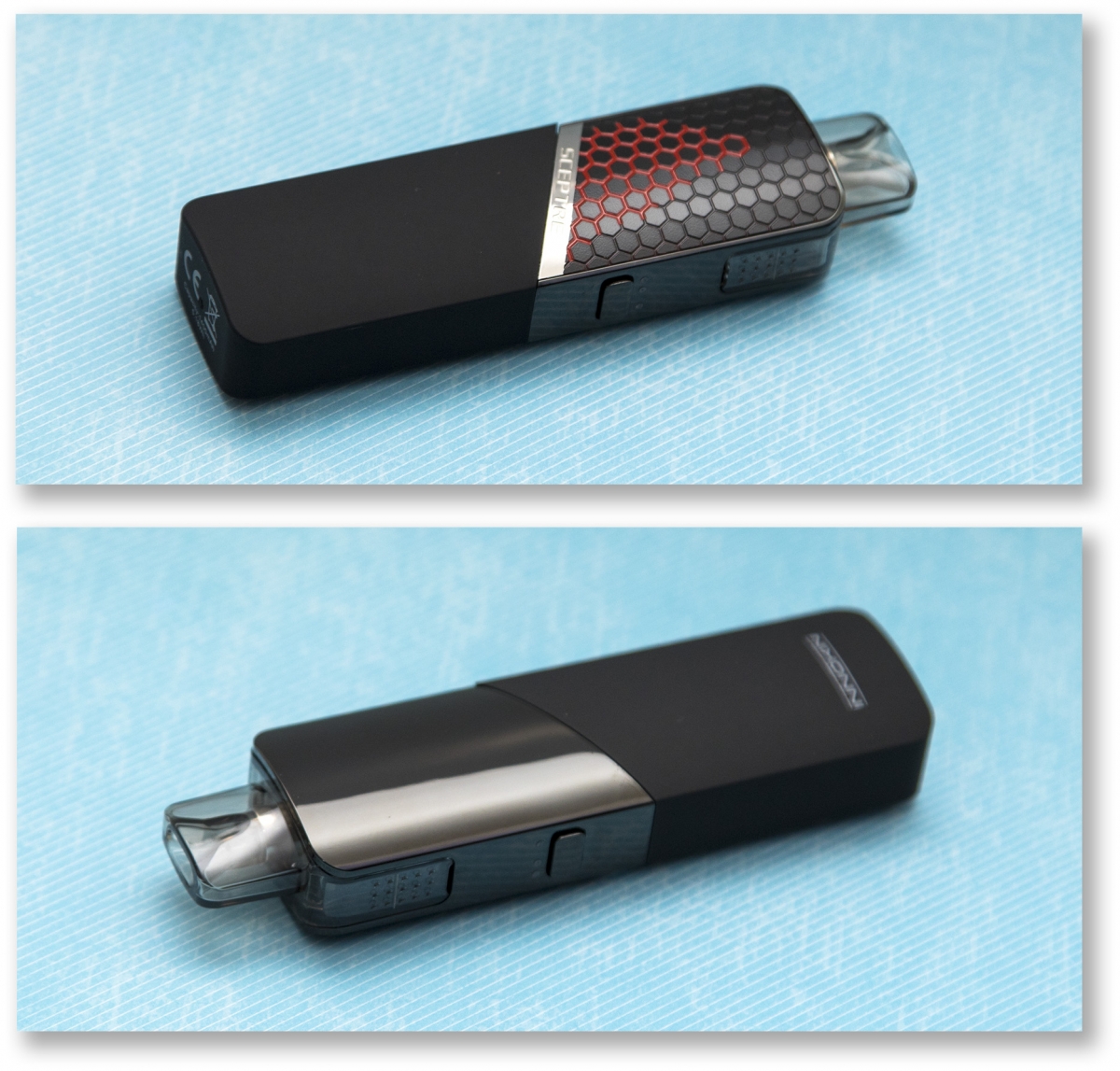 One of the three designs I received to review is the ‘BLACK’ option. This has a rubberised texture around the bottom half which feels nice and grippy in the hand. 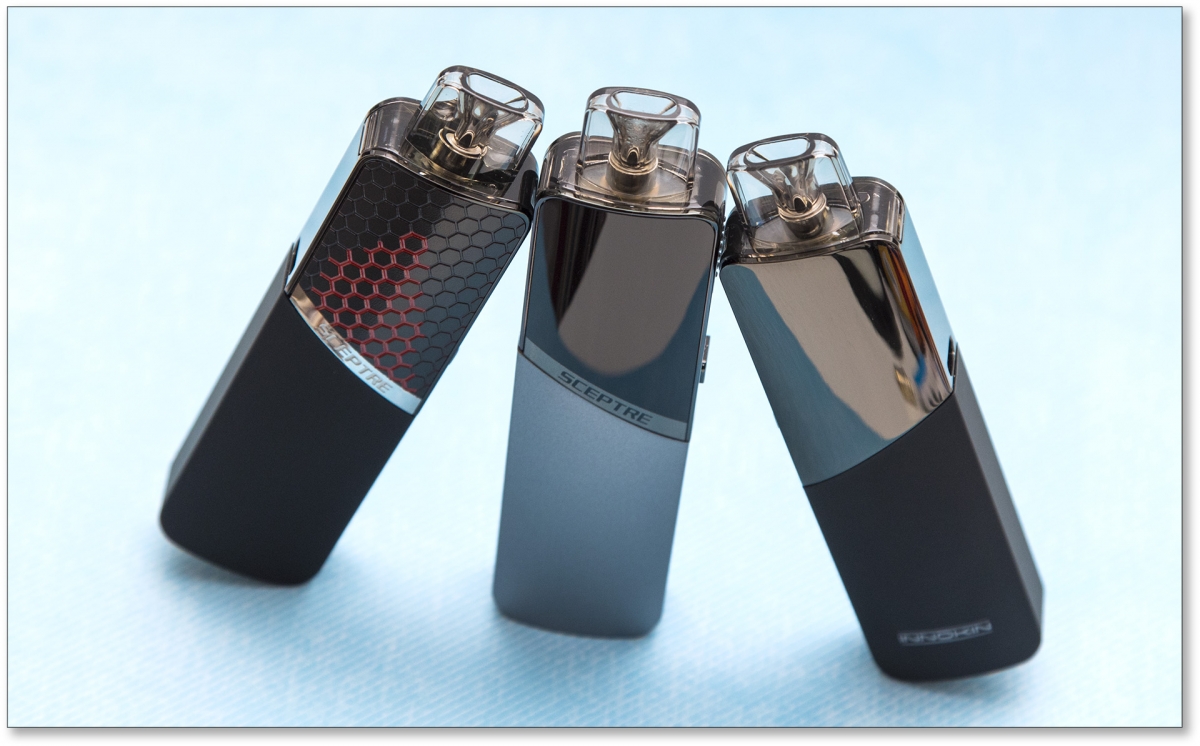 All feature their own unique top style which has a pattern on one side and a glossy finish on the other, this part is a bit of a fingerprint magnet.

I generally like the pod, the mouthpiece is very comfortable, it is really easy to remove and is held in place nicely. There is a slight bit of play, but nothing you notice when in use.

Changing the coil is a little different as it is held into a natty little twist to unlock base plate, but it’s not as easy as most of the recent plug’n’play pods as it is screws in to the base. 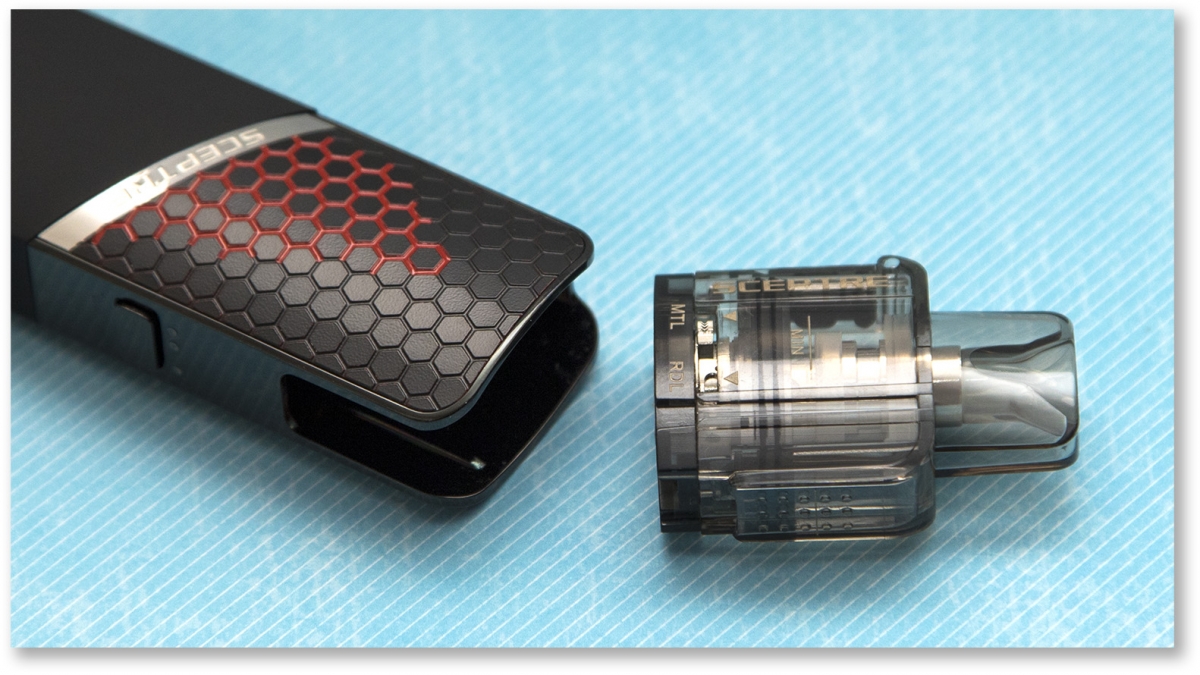 I really like the fitting of the pod, it slides into the battery section easily and there are some ridges on it for grip which makes it simple to remove with your thumb. 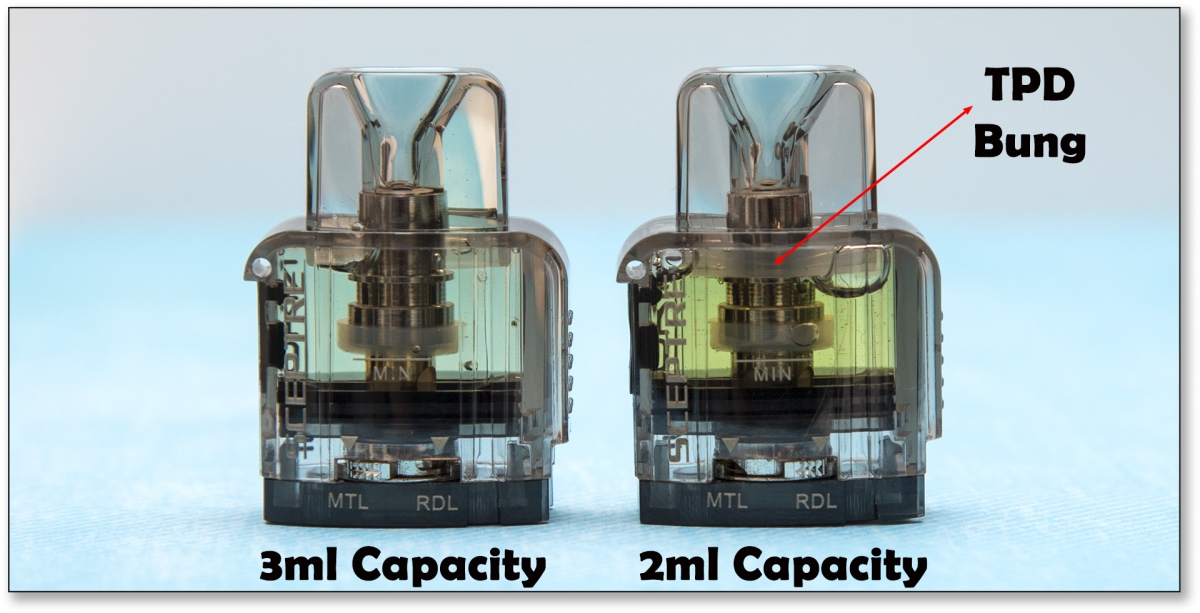 One of the best features of the pod is the adjustable airflow lever at the base of the pod which has MTL (Mouth To Lung) and RDL (Restricted Direct Lung) etched onto the base and is adjustable between the two.

The ‘Easy to Fill’ bung is okay, but I wouldn’t call it a feature. You have to remove the pod to fill it up, and the bung method isn’t my favourite way of doing it.

(A little more waffling from here on sorry)
This pod system is really basic and beginner friendly.

I do like auto-draw pod systems, especially for MTL vaping, but I also appreciate the button activated option too. The small boost option is ideal when you require your vape to be on the warmer side.

The fire button is oddly place though and lends itself more to index finger firing. I often found myself losing it and having to rotate the pod to fire. The auto draw came in handy more often than not. 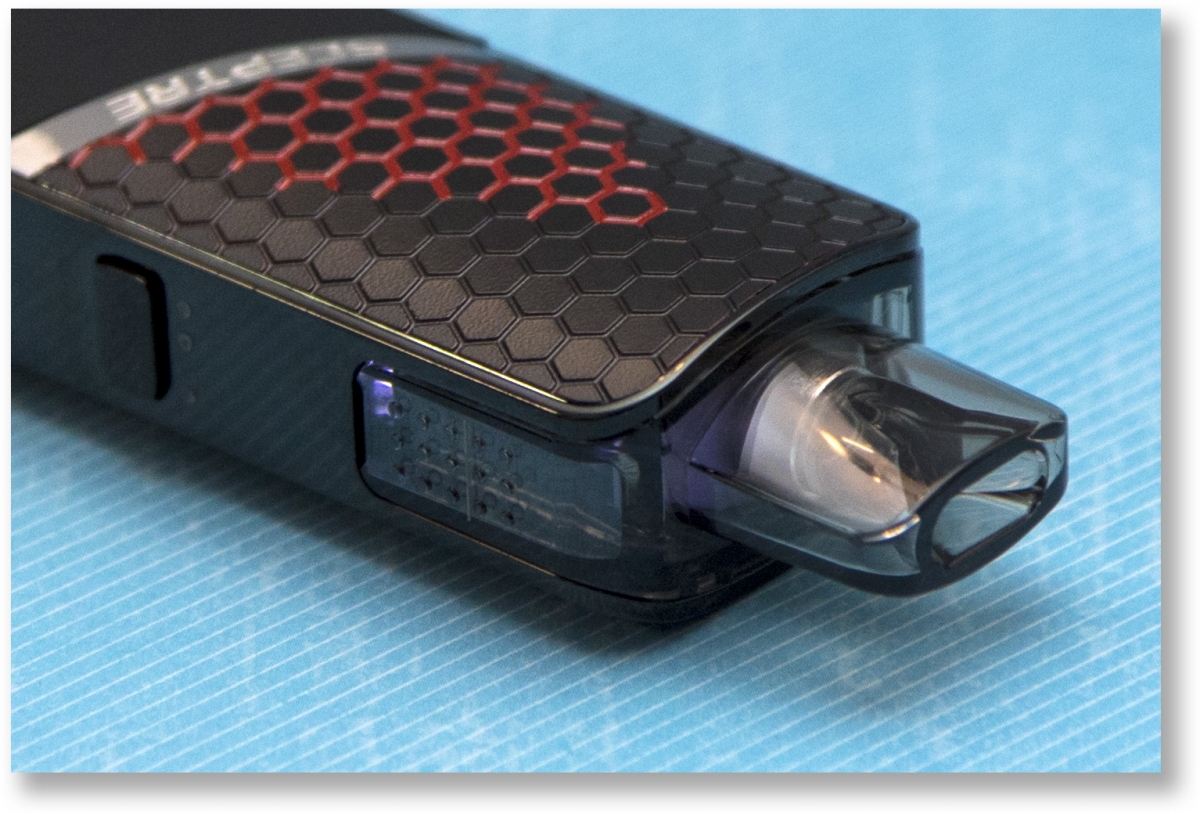 A little feature I like is the pod light. An LED at the base of the pod housing lights up when you insert the pod, or you can activate it by quickly pressing and releasing the fire button. This makes it easier to see you juice level, and it is just bright enough to see in daylight and easy in the dark.

The Sceptre detects the coil and adjusts the wattage automatically.

RDL
Restrictive Direct Lung vaping with the 0.5Ω coil is probably the Sceptre’s better mode, the draw with the airflow fully open is really satisfying. I preferred the ‘Boost Mode’ function as that little extra wattage increase made it just warm enough to let a bit more flavour through. The flavour is really good for such a low powered device, and the vapour production is surprisingly high. The coil life is excellent. I have been hammering this coil and still no sign of it quitting after three weeks.

Auto Draw requires a strong inhale to work, but I tended to use the button more in this mode.

MTL
Mouth To Lung vaping with the 1.2Ω coil with the airflow fully closed is a mixed bag. The flavour is insane and gave me that real wow factor, but the draw was way too loose for my liking. This is a real shame, if it was tighter I would have rated the Sceptre as one of my favourite MTL pods. Coil life was hit and miss depending on which juice you use, sweet 50/50 nic salt juices struggled to keep up wicking to the point where I found I had to go old-school and pin prick a couple of the wicking holes.

Battery life was excellent with the 1.2Ω coil, easily a whole day before it went to Red. With the 0.5Ω coil, it was reasonable for a pod, around four hours of regular use before I needed a top up charge.

The Sceptre’s Battery Capacity LED clearly shows current battery charge, and Green, Magenta to Red when it’s time to recharge the 1400mAh battery via micro usb. It’s only 1 Amp charging and takes around 1.5 hours to charge from flat, but generally charging on the go wasn’t too bad, around 45 minutes on average. 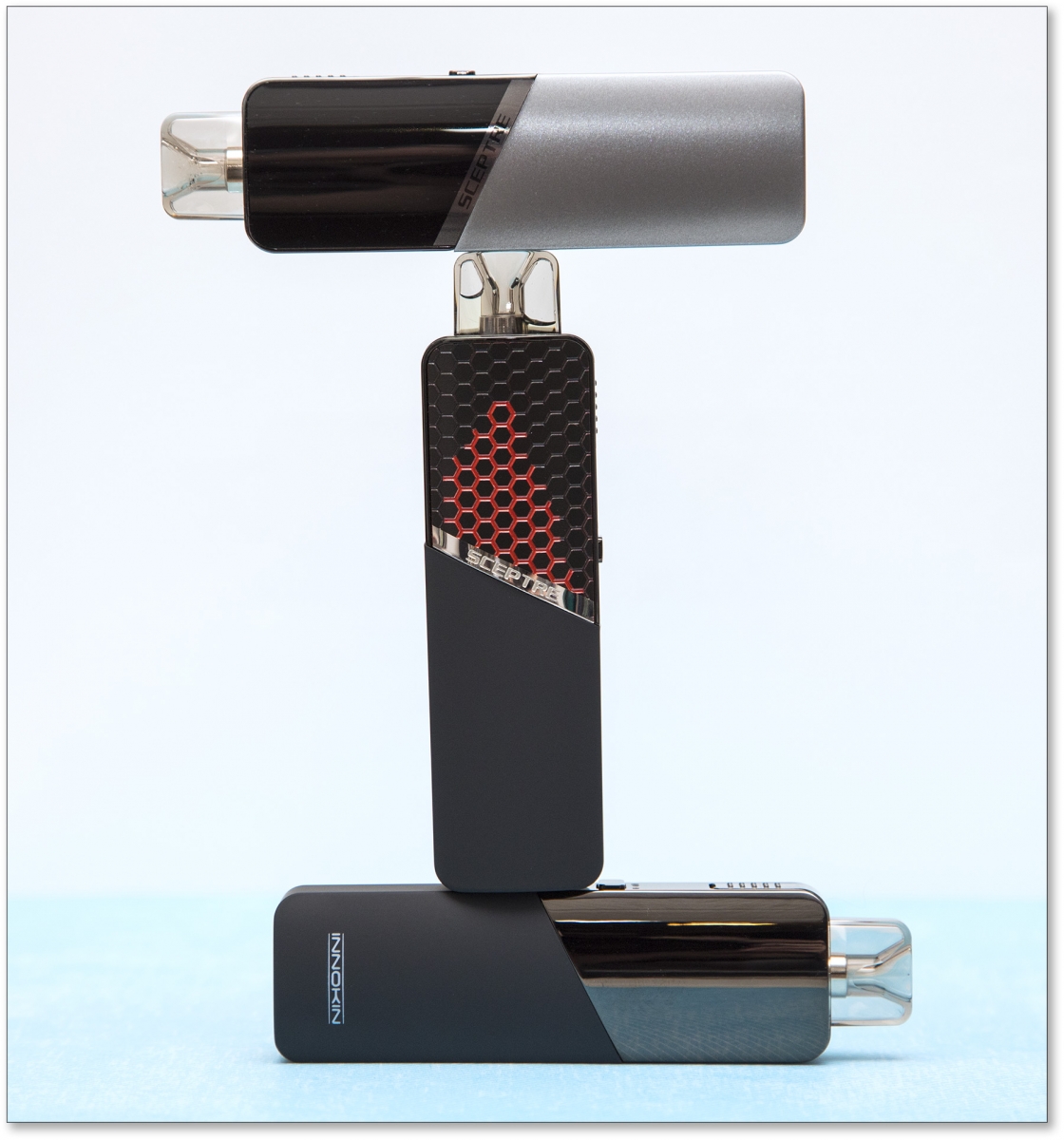 The Sceptre pod system isn’t without its flaws, but overall I really enjoyed using it. The styling and how it feels in the hand plays a large part of whether you will enjoy this pod or not, for me I found it to be one of my ‘Posh Pods’ and the flavour in both coils was superb. Despite its looser airflow in MTL, I soon got used to it as the flavour was worth it. There’s little innovation here and a bit of the ‘Looks over Substance’ factor to it due to its limited functionality, but that is also a strength if you prefer a simple fire and forget pod system.

If you don’t mind a looser MTL airflow and enjoy a restrictive direct lung draw, then there’s a lot to like with the Innokin Sceptre. Style and flavour are the headlines with this bit of kit. A tighter airflow for MTL would have made this pod one of the best. 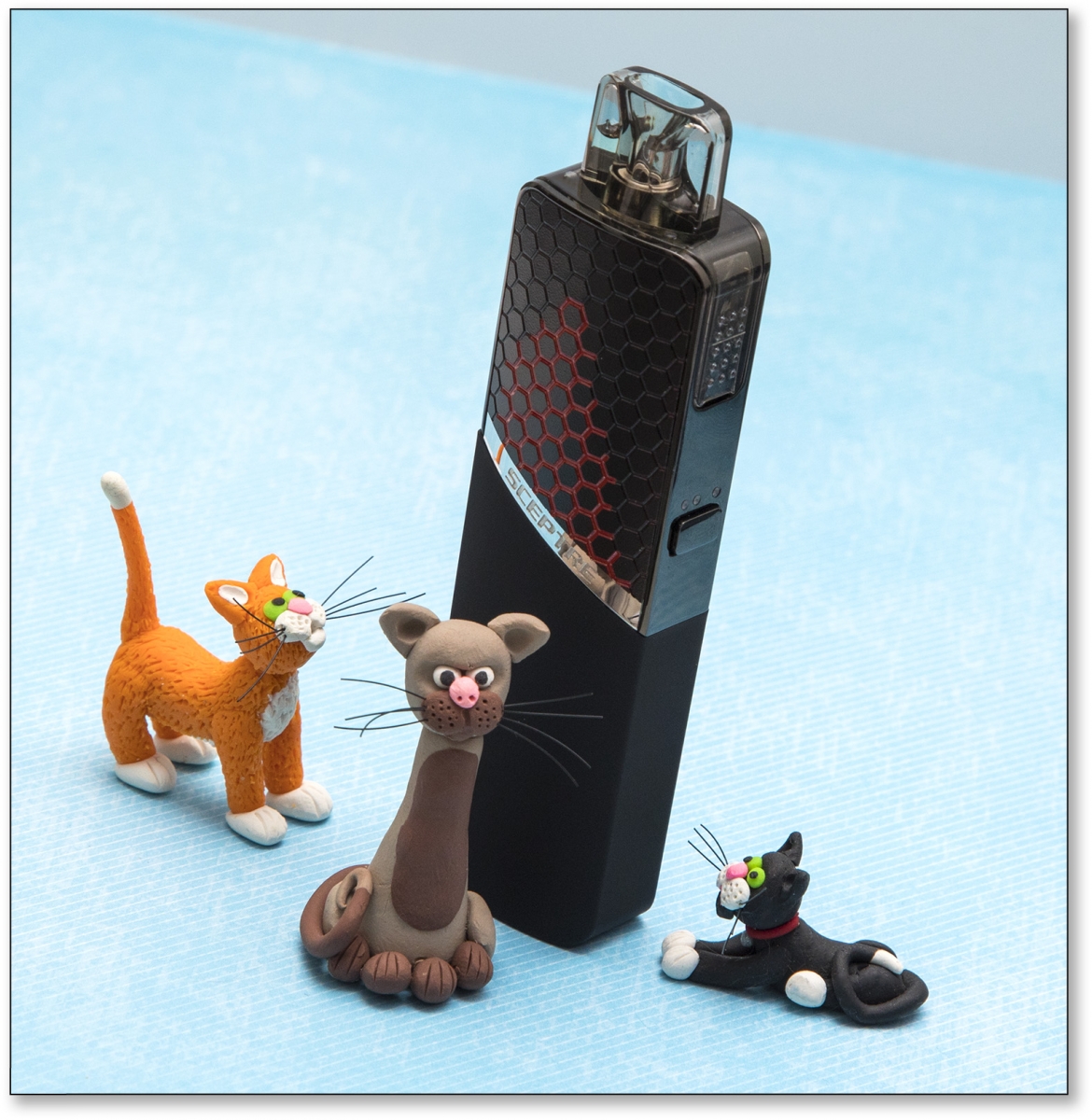