I’m a bit late to the party with this one but having been impressed by the Geekvape Obelisk 200 which I reviewed recently, I was more than happy to volunteer to review the Obelisk 60 pod kit when The Electronic Cigarette Company (TECC) got in touch to ask if we’d be interested in taking a look. 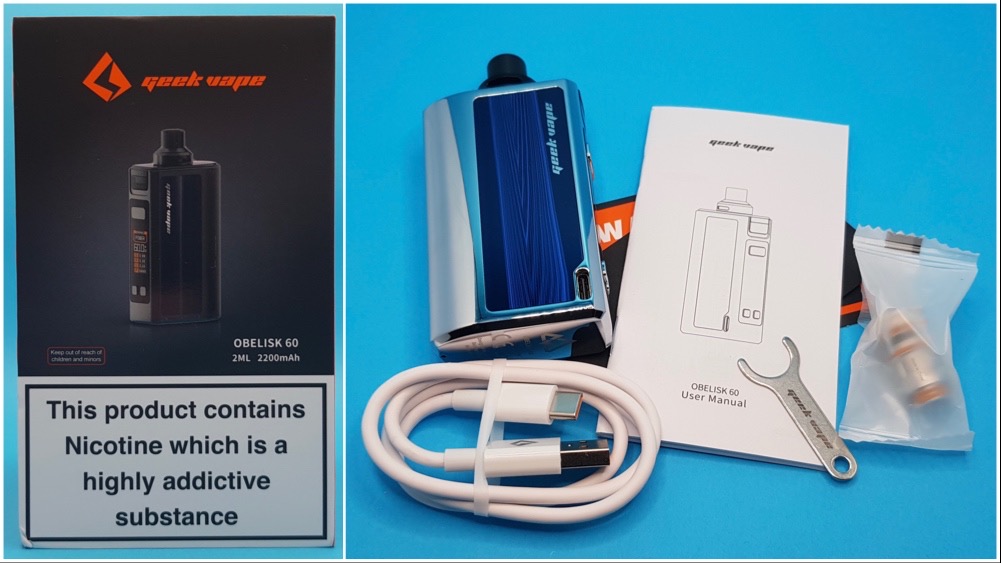 In the box with the Geekvape Obelisk 60, you’ll also receive a user manual alongside the customary warning and warranty cards, a spare coil (one is already installed in the pod), a Geekvape coil removal tool, and a high quality usb-c charge cable.

I was sent the blue version for review, whilst I was pleased to see that the large colour panels on either side of the chassis were covered by plastic protectors to prevent scratches and the like in transit, this comes with a highly polished metal chassis and I could tell that this was going to be an absolute fingerprint magnet before I’d even removed it from the box so I decided to put gloves on for the photo shoot! Once I’d started to use the Obelisk 60, my instincts were proven to be correct, I swear that this thing can collect fingerprints from across the room! If this is something that bothers you then you may be better looking at the black or gunmetal versions instead. 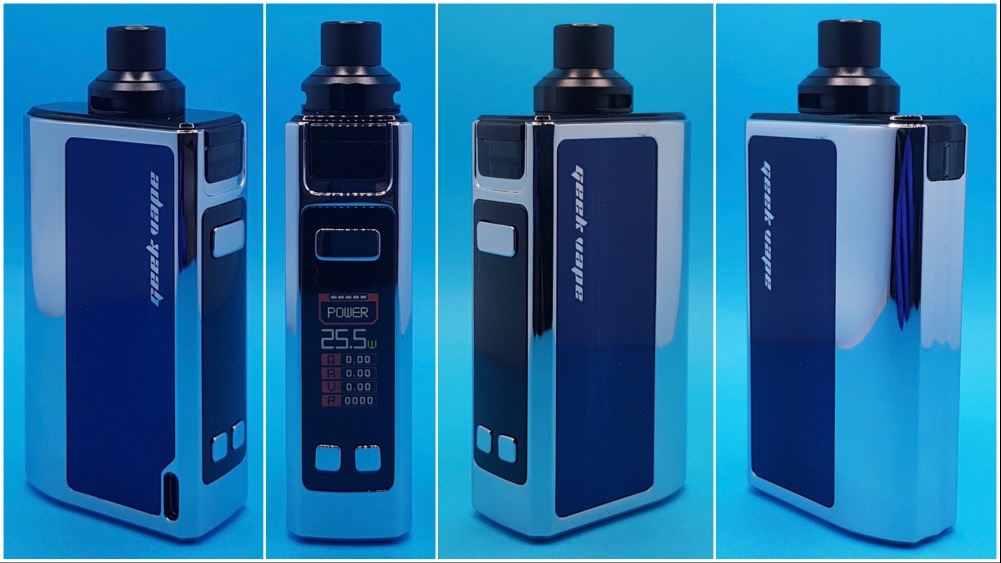 The Obelisk 60 follows the same design language as the Obelisk 200 and Obelisk 120 FC and is just a few millimeters shorter and narrower than my Obelisk 200 mod which meant it instantly felt familiar in my hands. It sports a metal chassis and the same colourful multi layered side panels which change their appearance as you play around with them in the light and also help you grip the otherwise very slippy chassis.

The front control panel is once again dominated by a 0.96 inch colour TFT screen and I have to say that I’m a big fan of the screens that Geekvape have been using, they’re bright enough to be seen clearly outside and you can turn the brightness down if needed indoors. The buttons are all plastic but feel of a high quality with nice tactile feedback but I was mildly disappointed to find a tiny bit of button rattle on the up/down buttons.

There are only two modes available on the Obelisk 60, Power (wattage) and Bypass, despite the manual mentioning temperature control a couple of times. This would be fairly pointless anyway as both of the available coils are kanthal.

The Obelisk 60 has an internal 2200mAh battery with 2amp fast charging via the usb-c port on one side. In my test runs this peaked at around 1.82 amps with a final recorded capacity of 2134mAh in just 1 hour and 25 minutes which was fairly impressive. 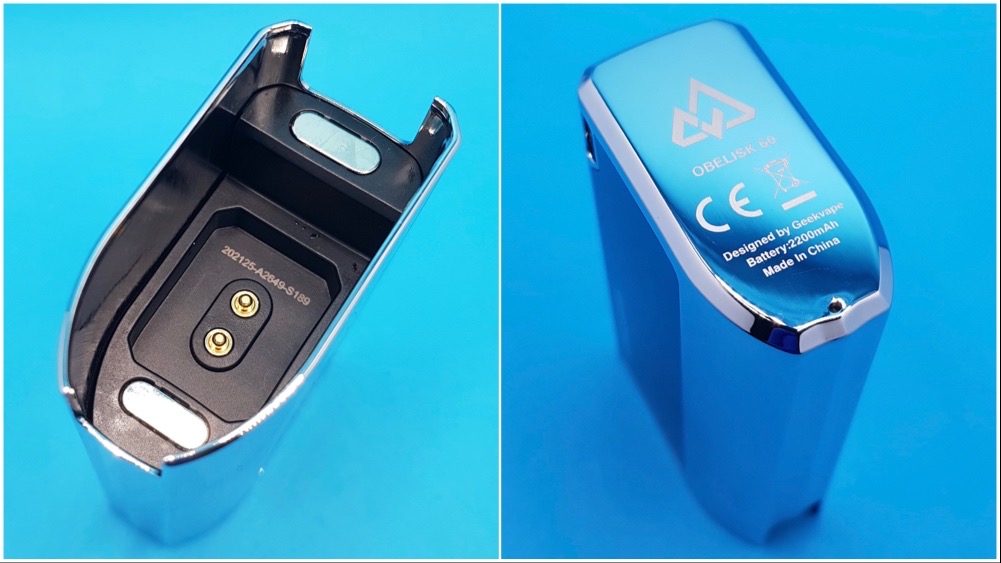 As this is a pod mod, the top has a large recess to accommodate the included pod rather than a 510 connector. This has two contacts for your coil along with two large magnets to hold the pod securely in place, there’s no way the pod is going walkabout on this one as it actually takes a decent amount of force to remove the pod and it snaps back into place with a satisfying clunk as well. As this is an internal battery mod the bottom is rather plain with some minimal branding, there’s also a tiny hole which I’m guessing is either for emergency venting? 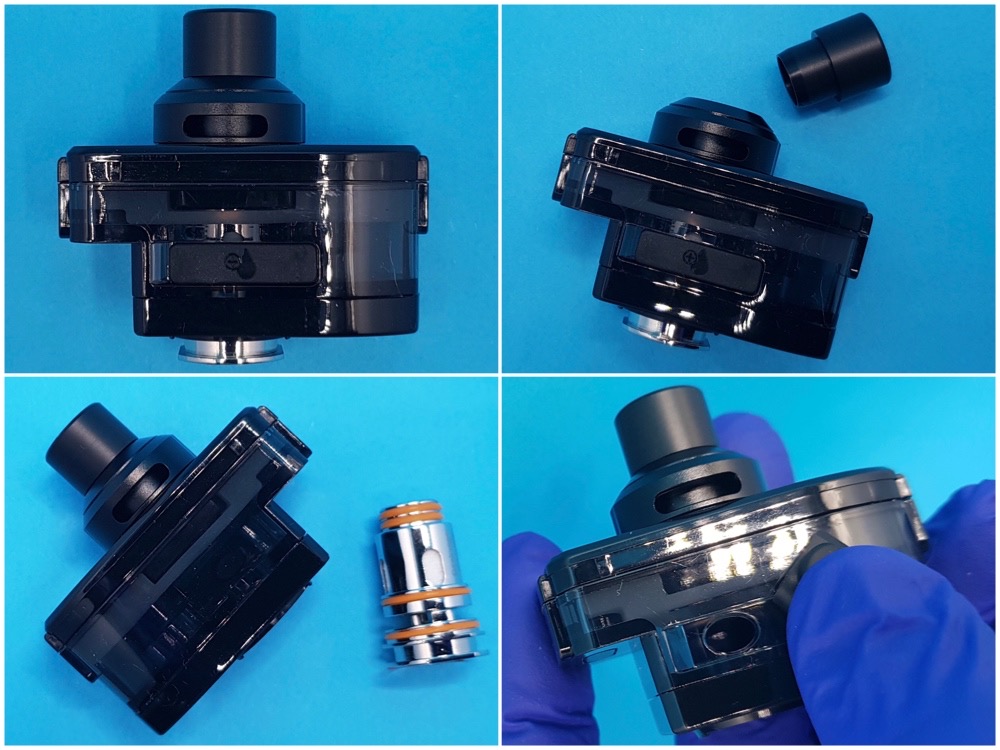 Speaking of the pod, this has both its plus and minus points:

The coils are press fit from the bottom as is common in these types of devices but the airflow comes from the top and runs down a tube inside the pod which then gets redirected under the coil. The airflow can be fine tuned by the airflow ring up top and is smooth across the board. This design also ensures that you shouldn’t encounter the common leaking and condensation issues often seen on many other systems as the airflow is separated from the recess in the battery.

There is a removable drip tip, but sadly it’s a non standard size so if you don’t like it… well tough! It does seem to come supplied with spare pods should you manage to lose it but a standard 510 fitting would have been much better here.

Once fitted into place, in the battery section there are two windows on the pod which you’re supposed to be able to see your e-liquid levels through. The pod is quite darkly tinted so I’m not sure just how useful these would actually be in the first place but in this 2ml TPD compliant version, these are completely obscured by the silicone bung rendering them completely useless in any case! The pod is also press fit together with no obvious way to remove the bung for “cleaning purposes” either.

The fill bung is on one side. Whilst the fill hole is a decent enough size, it’s location right next to the coil means that it’s all too easy to create an airlock whilst filling resulting in more e-liquid on your hands than in the pod! Whilst the airflow system divorces the liquid from the contact pins, you’ll generally need a bit of a mop up after filling to keep the pod recess dry. 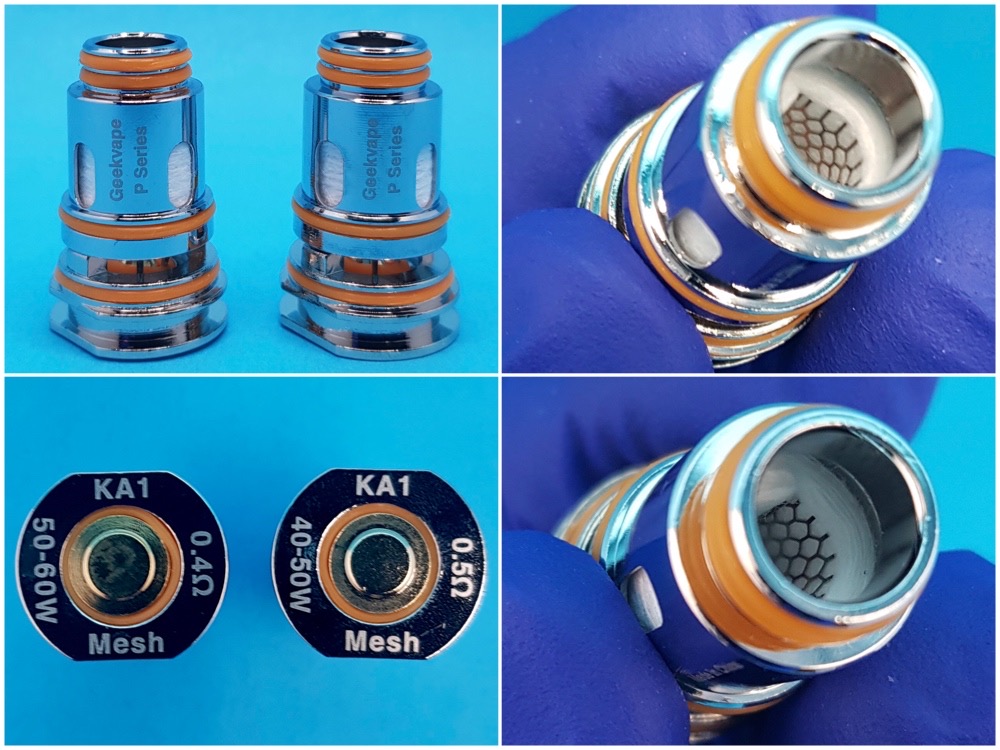 The coils are surprisingly large for a pod system, they’re more comparable to the sort of coil heads that you’d typically find in a sub ohm tank, they have triple o-rings to hold them in place in the pod and I did find them much easier to remove with the included coil tool. Top marks to Geekvape for once again clearly marking the coils, other manufacturers should take note here…this is how it should be done.

Both are a modern mesh style design with a fairly wide bore so there’s nothing on offer here if you’re a mouth to lung vaper. These are both very definitely aimed at the direct lung market. These are perfect for me as this is my preferred vaping style and they are both clearly marked as Kanthal so I don’t need to worry about my nickel sensitivity.

The 0.4ohm coil reads slightly under at 0.37ohms and is rated for 50~60W. I was reasonably happy with this at just 45W with the airflow about half open but it really operates best in that quoted 50 to 60 watt range. I settled on 55W with the airflow about three quarters open and this gave a really crisp satisfying vape. You can soon generate a small weather system here as well as it’s quite a cloudy vape.

The 0.5ohm coil came out much closer at just 0.51ohms and is rated at 40~50 watts. This is almost as cloudy as the 0.4ohm coil and again performed best in the quoted 40 to 50 watt range with the airflow close down slightly. I found this best at around 48 watts which means you won’t save much battery power over the higher power 0.4ohm coil, and I felt the high notes weren’t quite as well defined here so my choice would definitely be the 0.4ohm coil.

One other minor annoyance I found whilst testing the coils was that the Obelisk 60 would ask me the new coil/old coil question every time I removed the pod to either check my liquid levels or to refill the pod, and you’ll be doing that a lot thanks to that 2ml TPD bung.

I like the sleek overall look of the Obelisk 60 and the design of the pod makes this look like a conventional mod with a small dripper on top in use. The coils are superb and I really enjoyed the flavour I was getting here, particularly with the 0.4 ohm coil. If you’re a direct lung vaper who finds the experience of other pod systems a bit lackluster then this could well be worth a try. Be warned though that they both require a fair bit of power so even with the 2200mAh internal battery, I was barely making it through a day at work on a single charge.

One thing I’m somewhat surprised by is the lack of any optional extras like a 510 adapter or rebuildable pod which have been mainstays in previous Geekvape pod systems. I’m guessing that these perhaps didn’t sell as well as Geekvape would have liked in previous outings, so if this is something that you look for in a pod system then you may need to look elsewhere. Luckily the stock P-Series coils are superb just so long as you’re a direct lung vaper of course. 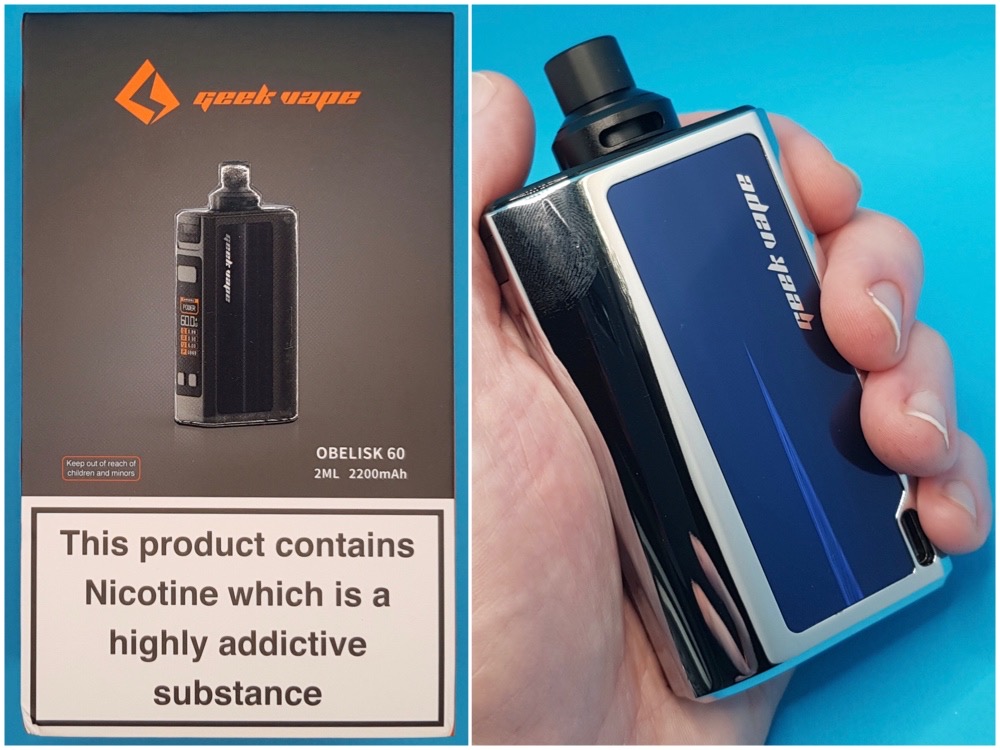