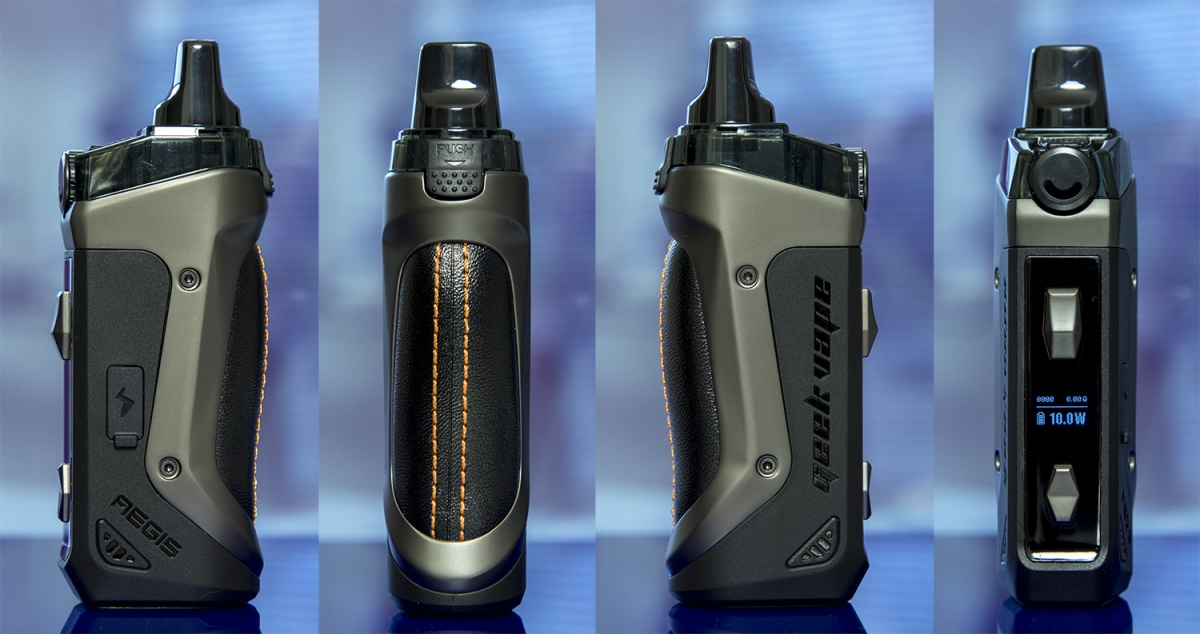 I am going to attempt a less specs and more user experience review this time in an attempt to make it more of an enjoyable read rather than an epic chore, let us know if this works or not for you!

Firstly GeekVape title this as a ‘Pod Mod Kit’ which is a new one on me, reasonably accurate or should it sit in the AIO (All In One) category? I’m fine calling it a Pod Mod as there is a current trend for this style of device.

I could simply sum this up as the Best AIO of 2019 – Buy It!
But to expand, this system really blew me away on its looks and handling but the flavour is fantastic, the new GT Boost Mesh coils are sublime for MTL & DTL and the airflow control is the best I’ve come across on any Pod/AIO. As you can tell I love this kit, read on to find out more.

I was supplied a SAMPLE version so I will skip the unboxing, ALSO the firmware may be different in the final retail version though I can’t fault it as is.

As mentioned my box isn’t the final retail version but here are the contents: 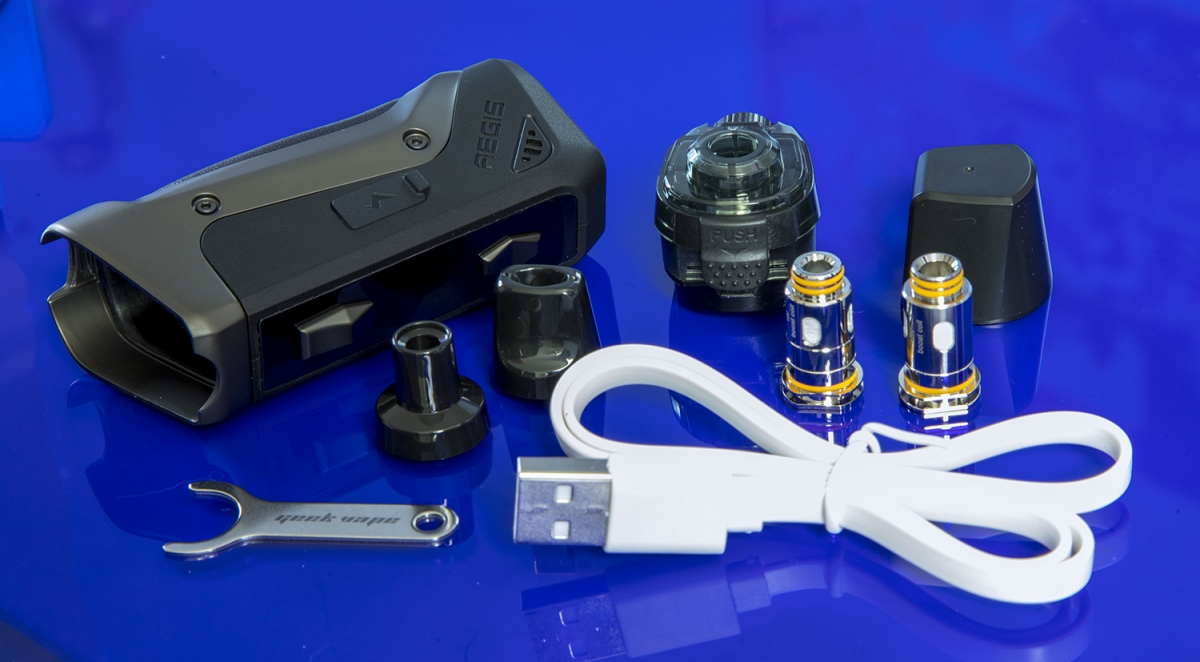 From the moment I first held the Aegis Boost I was already impressed, it looks and feels great and the styling and details match the Aegis range perfectly with its durable and water resistant design. 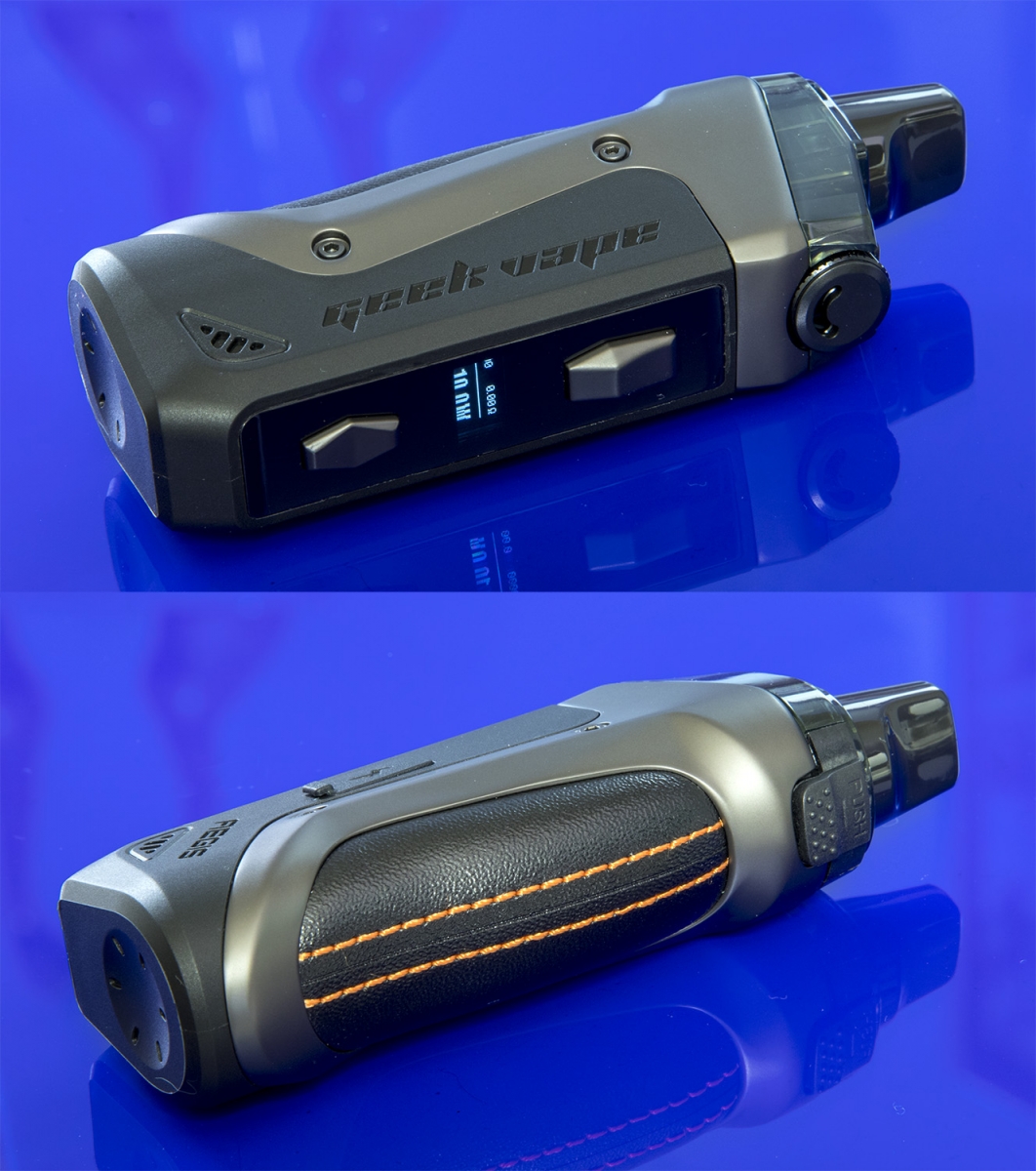 I won’t bore you with a full description as you can see them in the photos, though I will just cover some of the highlights. The mixture of alloy, rubber and leather (faux?) and dark pod really complement each other, along with its size makes it feel so grippy and comfortable.

The colour range is all tasteful and no loud patterns that could put people off, it looks robust and almost industrial yet classy, a slight contradiction but hopefully you see my point.

I received the Gunmetal version which suits me nicely. I have already ordered the Devil Red as a ‘spare’ (my usual excuse for getting a second one!). 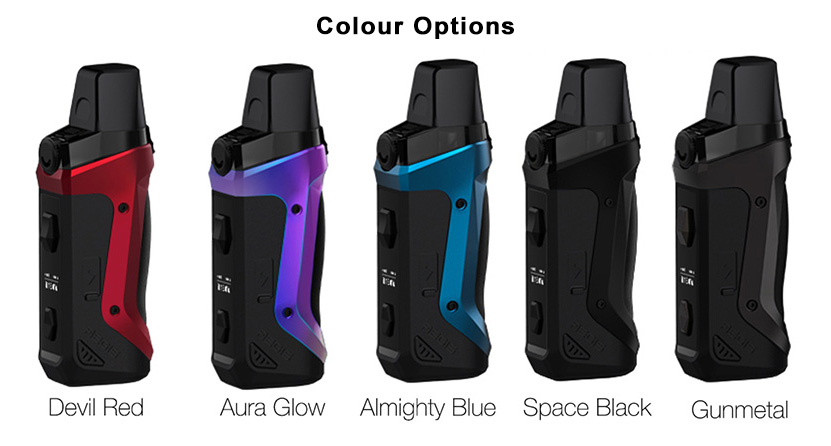 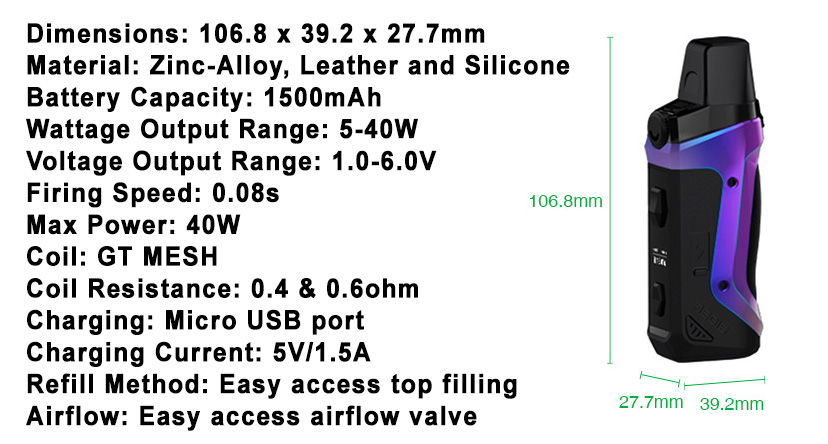 Highlights are the 1500mAh battery, the adjustable wattage up to 40 Watts, LED screen and its Easy access airflow valve (more on that later).

None of the above are idle boasts and I’m in agreement with all apart from the RDTA which isn’t available yet.

This feature is somewhat played down. Without doubt it is water resistant and would likely survive a brief drop into water but after checking out a couple of videos I would not risk submerging it for any more than a few seconds. By its nature, the pod draws in air which is where water will leak in. As far as I’m concerned, it’s just not worth the risk to ruin this great system so I am just going to consider it as WATER RESISTANT, feel free to prove me wrong ☺ 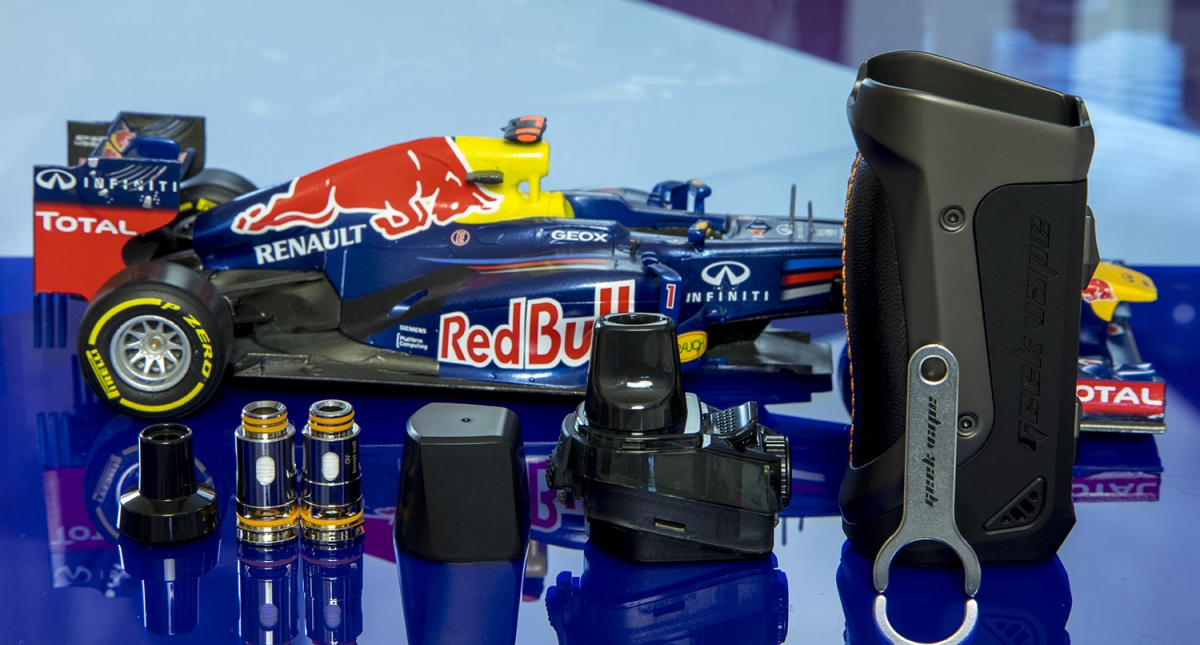 The Aegis Boost is very Pod/AIO like, making it simplistic to take apart and change the coil. GeekVape also include a coil removal tool to make removing the coil easier by levering it out, though I didn’t find it a problem removing the coil without it.

The Pod/Cartridge/Tank is easy to remove via a press release clip which is very effective and secure, simply push and lever up and the pod pops out, so to concentrate on the pod section first: 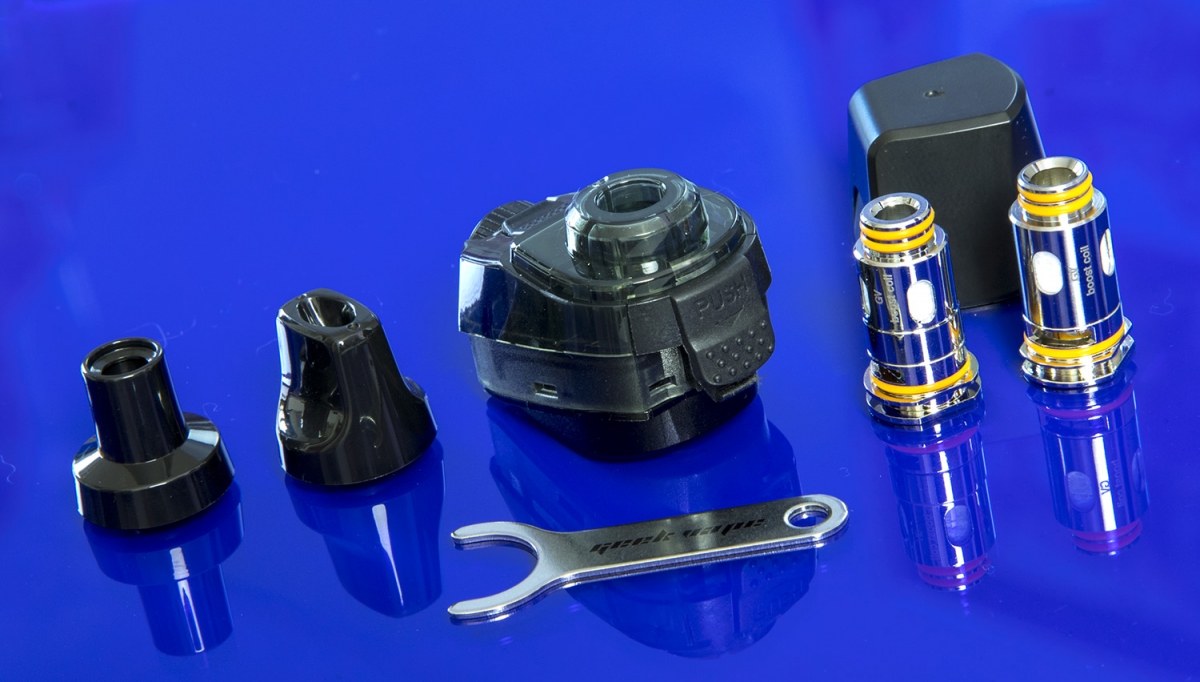 Any pod AIO user will be familiar with the coil fitting which is a press fit. The main innovation is the removable and alternate mouthpiece which is a great addition, though the wide bore size is exactly the same and it would have been nice to have a narrow bore option but the ‘whistle tip’ option is so damn comfortable I’m happy with that. It is also 360 degrees rotatable so you can vape to suit you preference.
**I’m not sure if the retail version has the two options as I have only seen the whistle tip included**

You also receive a top protective cap, though handy at times (like travelling) I haven’t bothered using mine as being loose I’m bound to misplace it.

Capacity wise, I was lucky enough to get the 3.7ml version which is excellent, especially for DTL on the 0.4 Ohm coil. I highly recommend changing the 2ml TPD for the 3.7ml one.

In theory the top filling bung (which is a little fiddly) means you don’t have to remove the pod to refill, but in practice the cartridge is so damn dark it’s really difficult to see you juice and juice level so I ended up removing the cartridge to fill. Even then it’s not that easy to see, I found it best to fill it up tipped over with the mouthpiece down. This is the main complaint of the whole kit, but it’s not a deal breaker by any means as I’m used to this sad fact that many pods/AIO seem to follow.

Currently there are two GV Mesh coils available which Geekvape claim are suitable for MTL & DTL and I have to admit I was very sceptical that a high wattage 0.6 Ohm mesh coil would deliver a decent MTL experience – happily I was proved to be very wrong in my scepticism ☺ 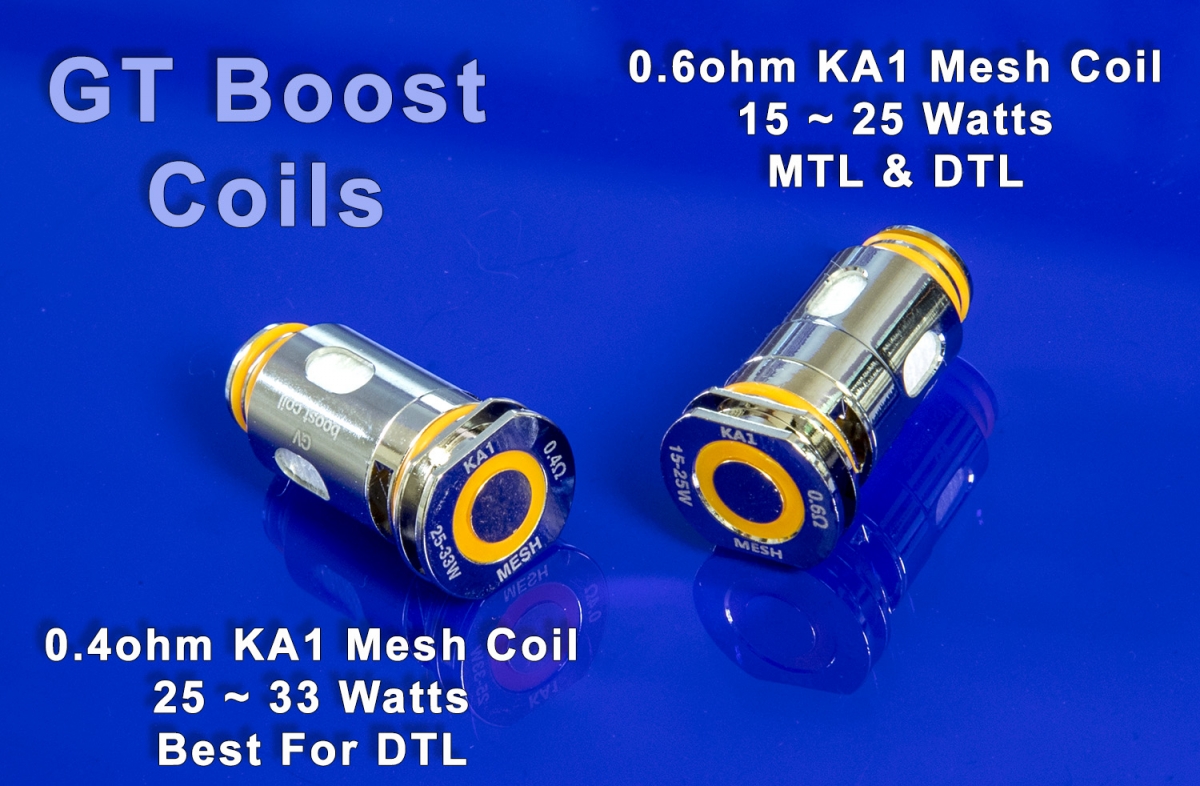 The coils have large wicking ports which prove to be very effective for MTL Nic Salts and 70/30 DTL juices.

At first when I heard this was going to be available I was like ‘YES!’ but I really can’t see it beating the Mesh coils, time will tell and I will no doubt buy one.

Mod wise, there’s little to setting it up. There is an small but clear LED screen displaying:

Though I didn’t receive a manual I found the settings simple and intuitive:

Onto what ended up being a mind blowing experience!
After charging the mod (which took under an hour), I chose to test the GV Boost Mesh 0.6 Ohm coil first, primed it with my current favourite Rachael Rabbit 20mg Nic Salt (Orange Mango Passionfruit), and ‘popped the pod into the pod mod’ and set the wattage to just 10 Watts to start breaking in the coil, closed the airflow dial down to what seemed to be around 2mm expecting a cool underpowered vape so I didn’t build my hopes up too much.

I love MTL & DTL though I mostly MTL indoors so I have some great MTL pods, AIO’s RDA’s & RTA’s, but the draw and flavour from the Aegis Boost was in another league! It only got better as I tweaked the airflow and upped the wattage to 13 and this was my sweet spot, a nice warm tight draw full of flavour.

The airflow was far more effective than I expected. The dial method is very slick and easy to fine tune and has knurling at the top. The resistance is tight enough to prevent accidentally changing it. I tightened the airflow down and it was super tight, like sucking a football through a straw, but soon found my ideal ‘ciggie like’ draw. 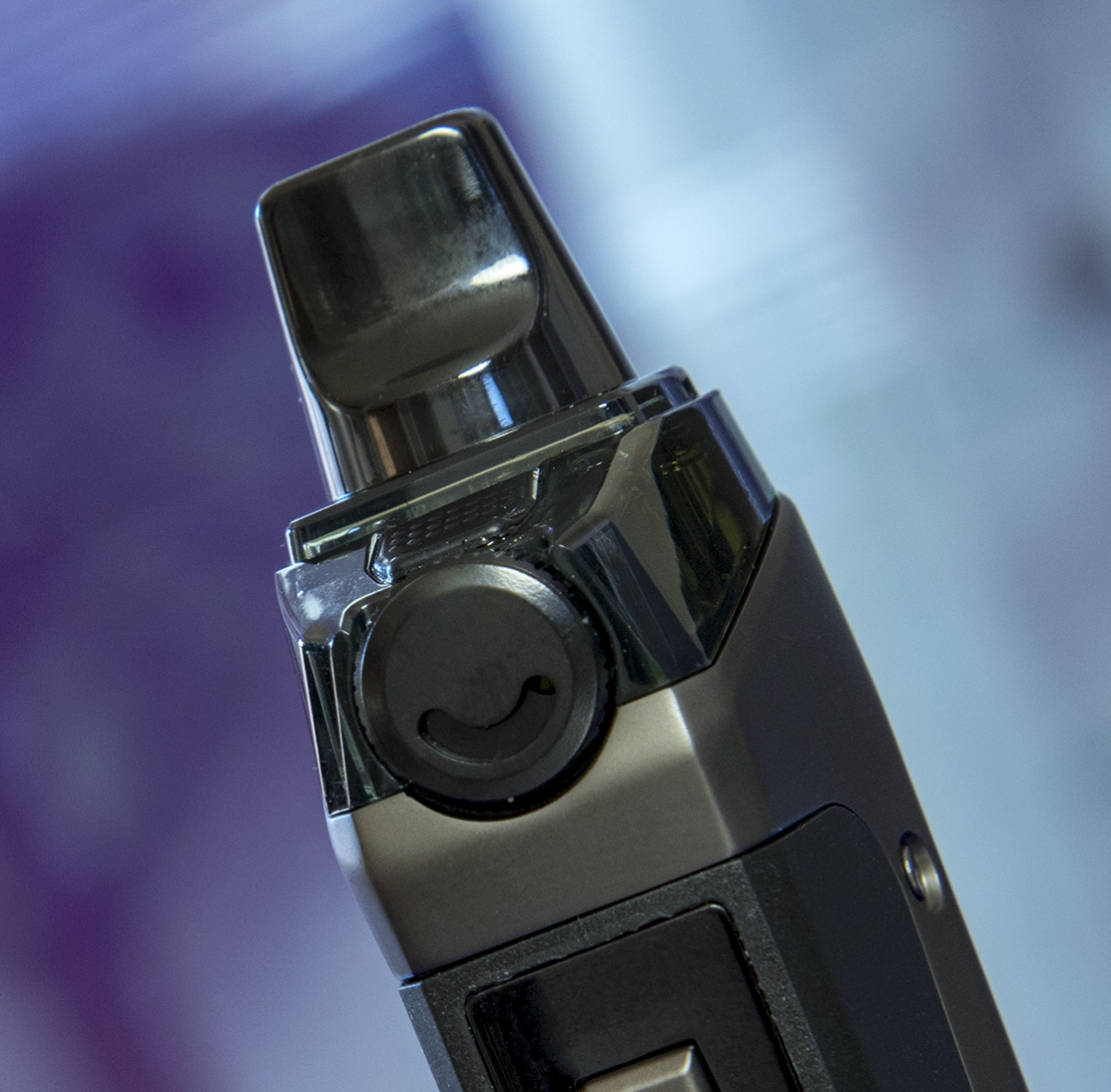 Onto the DTL 0.4 Ohm GV Mesh Coil and airflow

After soon wolfing down 3.7ml of Nic Salts (I just couldn’t put it down) I went onto changing the coil to the 0.4 Ohm option, primed and filled up the tank with the same flavour Rachael Rabbit but 3mg 70/30 shortfill version, opened up the airflow fully then increased the wattage to 23 and let it saturate. The first draw wasn’t as mind blowing as the 0.6 Ohm coil with nic salts, but after breaking in the coil and vaping at 30 watts – BINGO! Flavour & cloudfest, the airflow was surprisingly airy and I even had to close it down a little. It didn’t take too long to get through 3.7ml as you would expect but it's not as thirsty as my usual sub ohm DTL attys.

The vape was warm, hard hitting and full flavour, the best I have had from a Pod / AIO. It reminded me of that wow factor of the first Mesh coil tank I had tried (Horizontech Falcon) but with a third of the power – bonus!

I can’t fault the mod performance, it was instant and hard hitting, simplicity. Battery life was excellent with both coils, MTL would last a whole day and the DTL around four to five hours of heavy use.

This is only the second device of this ‘Pod Mod’ style. After reviewing the fantastic Artery Nugget AIO, I already thought I had found the best, GeekVape have made the choice tougher already. 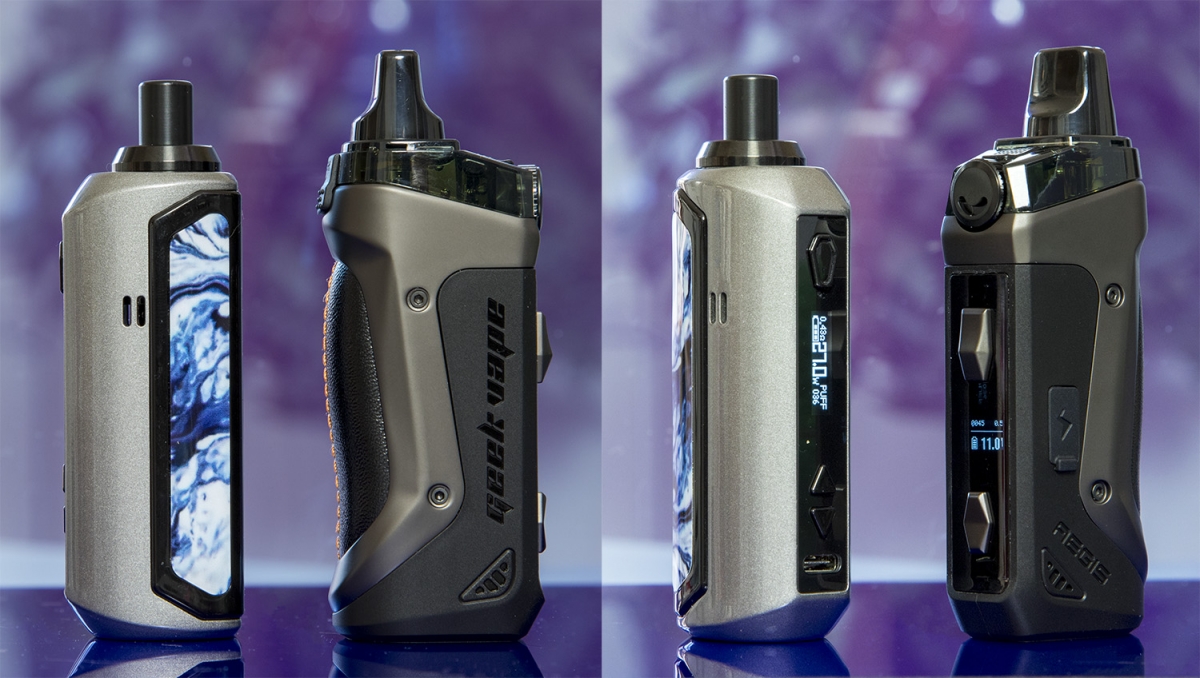 It’s all too easy to get caught up with the shiny novelty factor, both devices are exceptional but the actual pod and coils tip the balance in the favour of the GeekVape Boost and the airflow is also better for MTL, but when it comes to DTL things get tighter. There’s not a lot in it and I would have to flip a coin to decide.

I put both to one side and picked up my current favourite Pods & AIO and MTL attys, used them alternately for a few hours then went back to the Aegis Boost. Here comes a bold statement:

The Aegis Boost is the best MTL device I have tried, this also includes my favourite RTA’s & RDA’s.

DTL Wise, it's right up there with the best AIO’s I own, certainly in my top two.

The Aegis Boost is clearly the largest in the line-up and it’s actually larger than some of the traditional mini mod/tanks, it’s still pocket friendly (maybe not shirt pocket) and lightweight.

The GeekVape Aegis Boost is probably my favourite vape of 2019, quite a pleasant surprise for me as I enjoy both MTL & DTL and the Aegis Boost performs perfect for both making it a true ‘All in One’ and will clearly become my go to device when I leave the house. It's already my go to indoor vape.

Its durable and rugged design is a bonus, it’s nice not having to carefully put it down on abrasive surfaces to avoid scratching it. It’s also cheap enough not to treat it preciously.

Vaping is very subjective but I can’t see anybody not liking the vape this device produces so it will come down to looks and style for some, if you don’t like its style then you will be missing out on a superb flavour giving device.

I know I have skinned down the review and missed bits, but hopefully I have covered what you need to know rather than pad it out with obvious stuff. Hopefully you can tell just how superb this package is and why I have rated it so highly. If you like the look of it ,I am sure you won’t regret this purchase.

Score 9.5/10 – Perfection? I will be surprised if it can get better than this

A huge thanks to Heavens Gifts for what truly is a gift and a pleasure to review ☺
https://www.heavengifts.com/product/Geekvape-Aegis-Boost-Pod-Mod.html 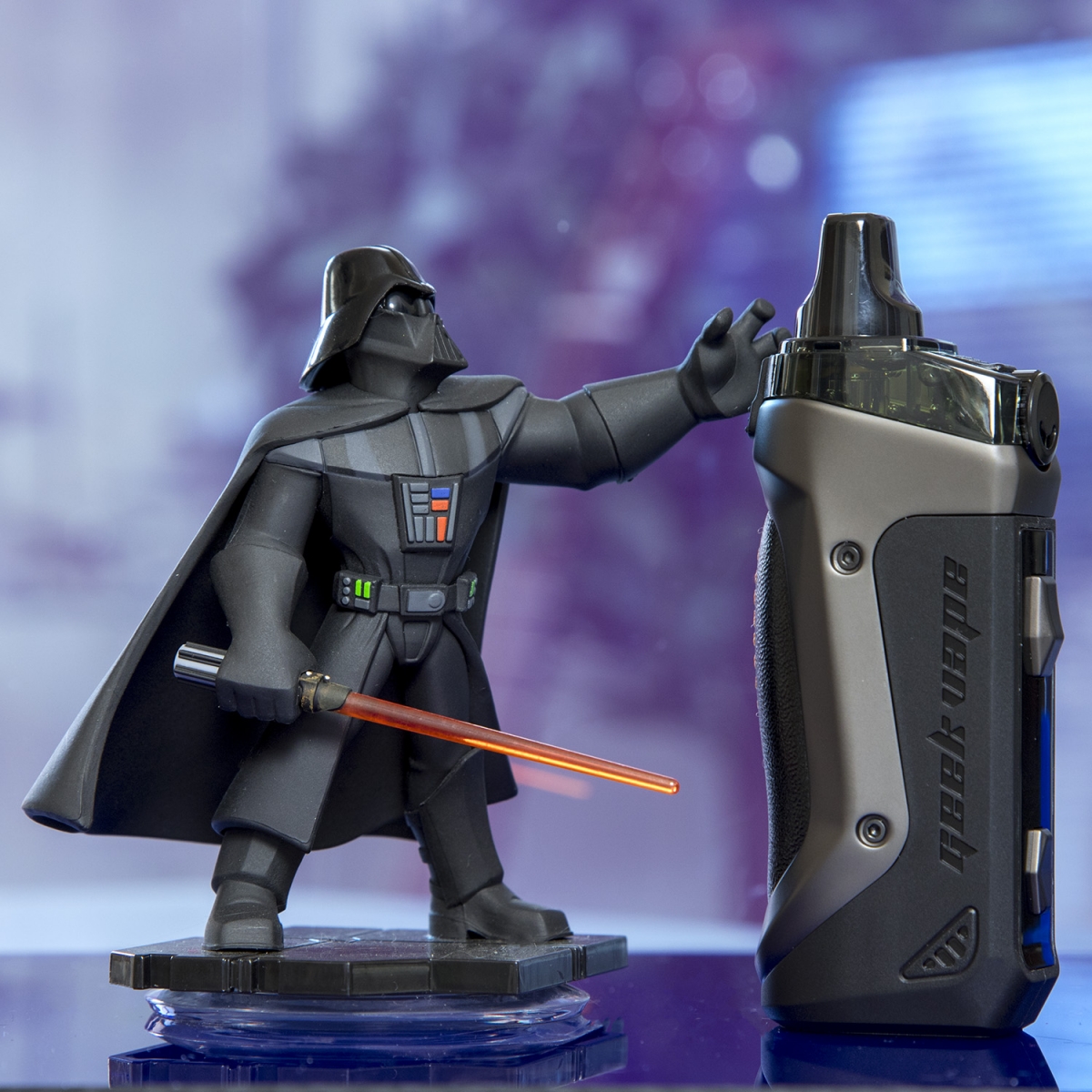