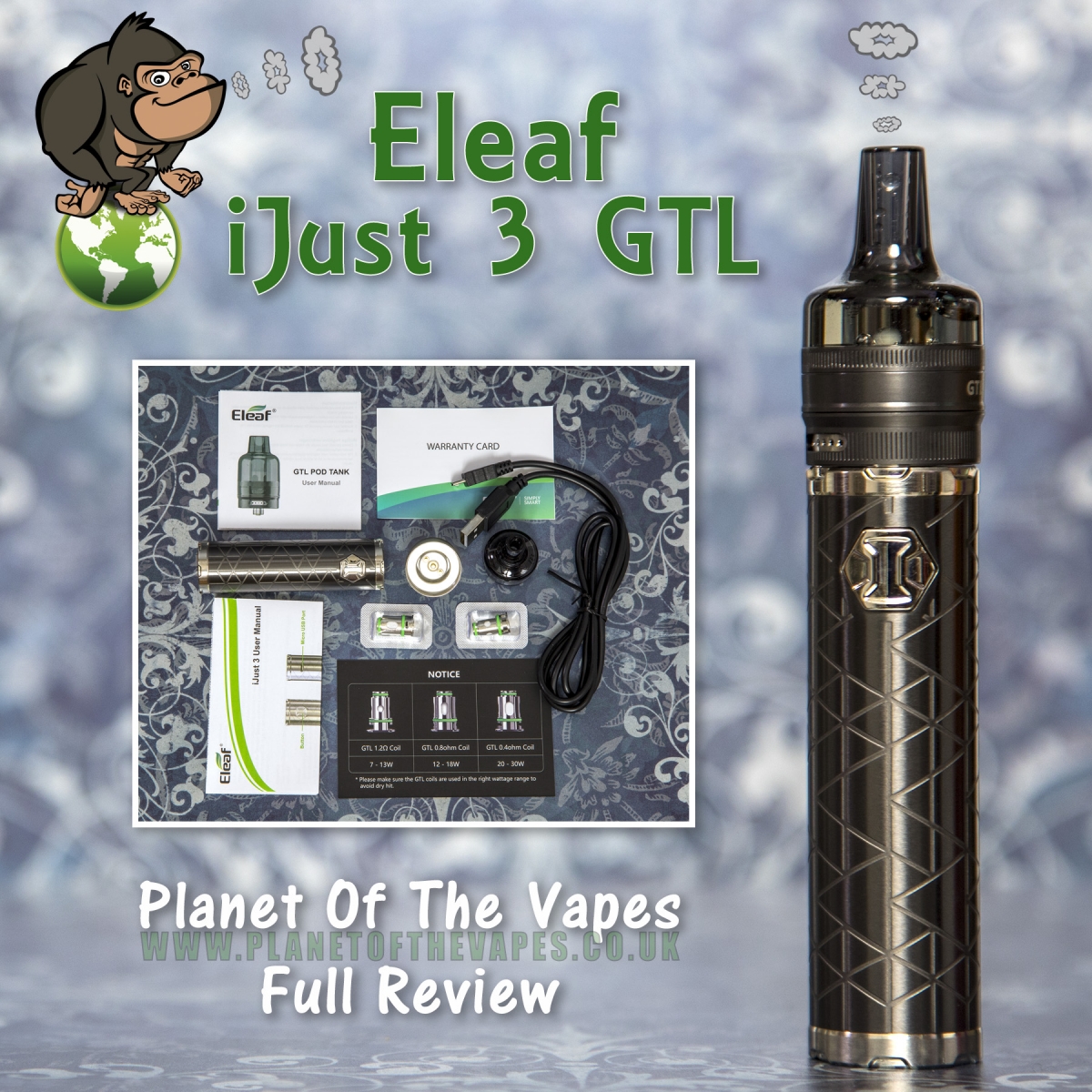 The new iJust 3 kit is a bit of a mashup. The iJust 3 has been out for a couple of year, but this time they have popped the new GTL pod in a 510 connection on top of it, and they partner up pretty well as it turns out. 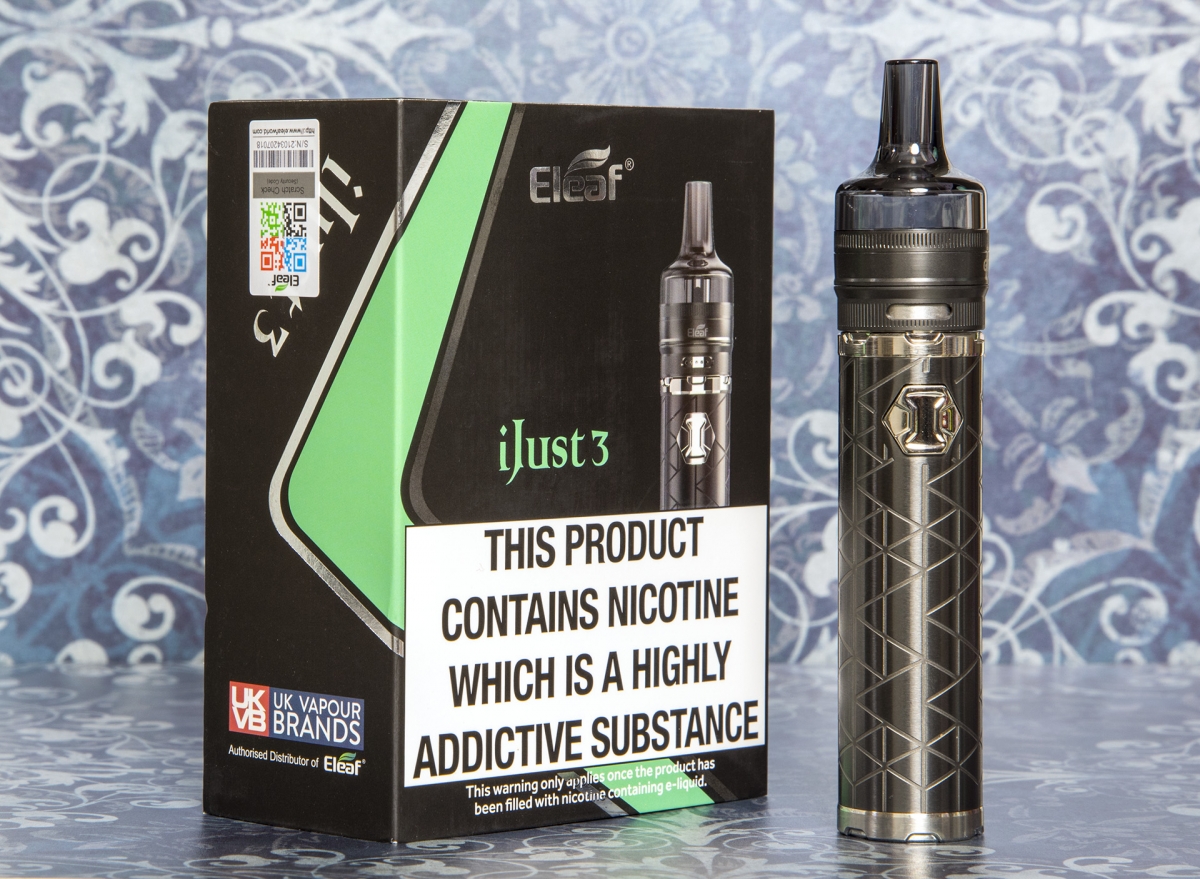 Features wise; there’s pretty much zero innovation going on here and the mod is very basic. It’s the pod which makes this kit an interesting addition.

The ‘Direct Output’ gives away how simple the mod is, basically it's a regulated mech style but with the safety features you need. The 3000mAh battery capacity is perfect and adds extra appeal for all day users. The wattage range is just a guide as you cannot tell or adjust the wattage, you just need to make sure your coil performs within this range.

Although it’s Micro USB charging, it does it a fast 2 Amps which is a pro. 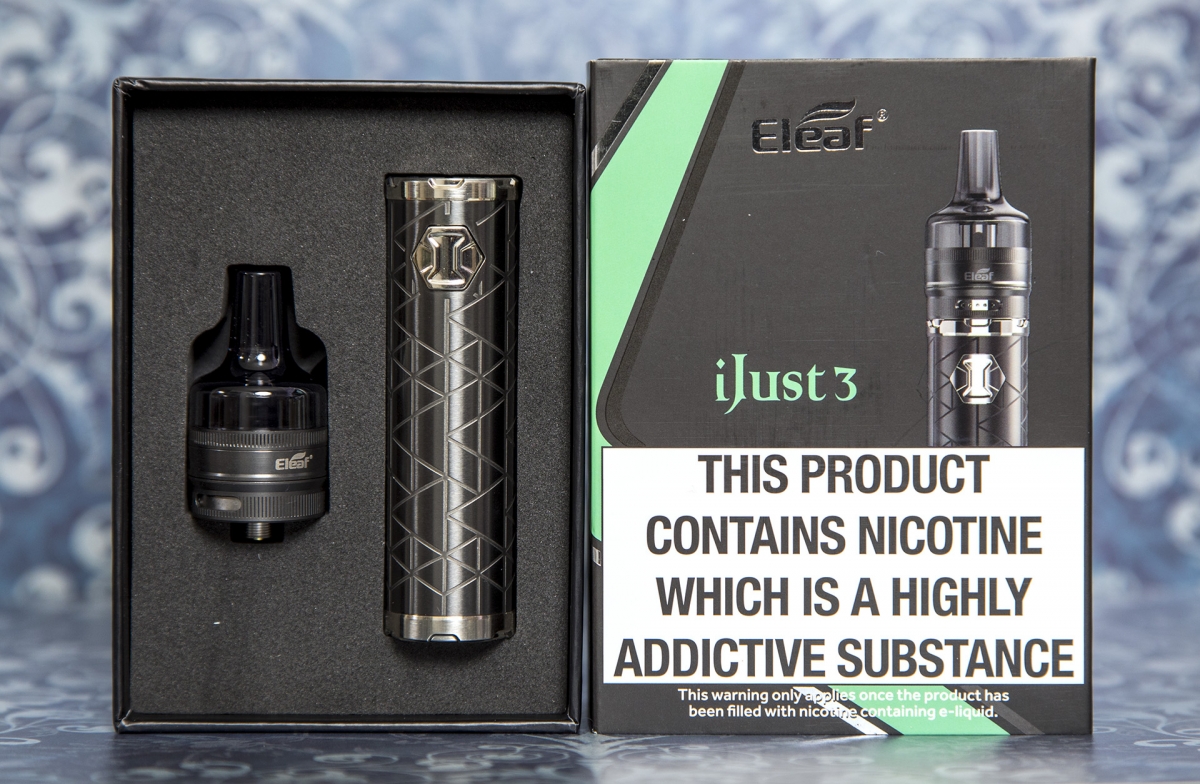 The iJust 3 GTL kit comes in the new style Eleaf box which would look really nice without the nasty warning label, but it's sturdy and good quality.

Inside the box you get the iJust 3 battery, 1 GTL Pod Tank (See "Podank" is almost taking off!), 1 x GTL 1.2ohm coil, 1 x GTL 0.8ohm coil, a super long Micro USB cable (nice one Eleaf), 2 x user manuals (one for the Podank and one for the battery), and finally the warranty card. 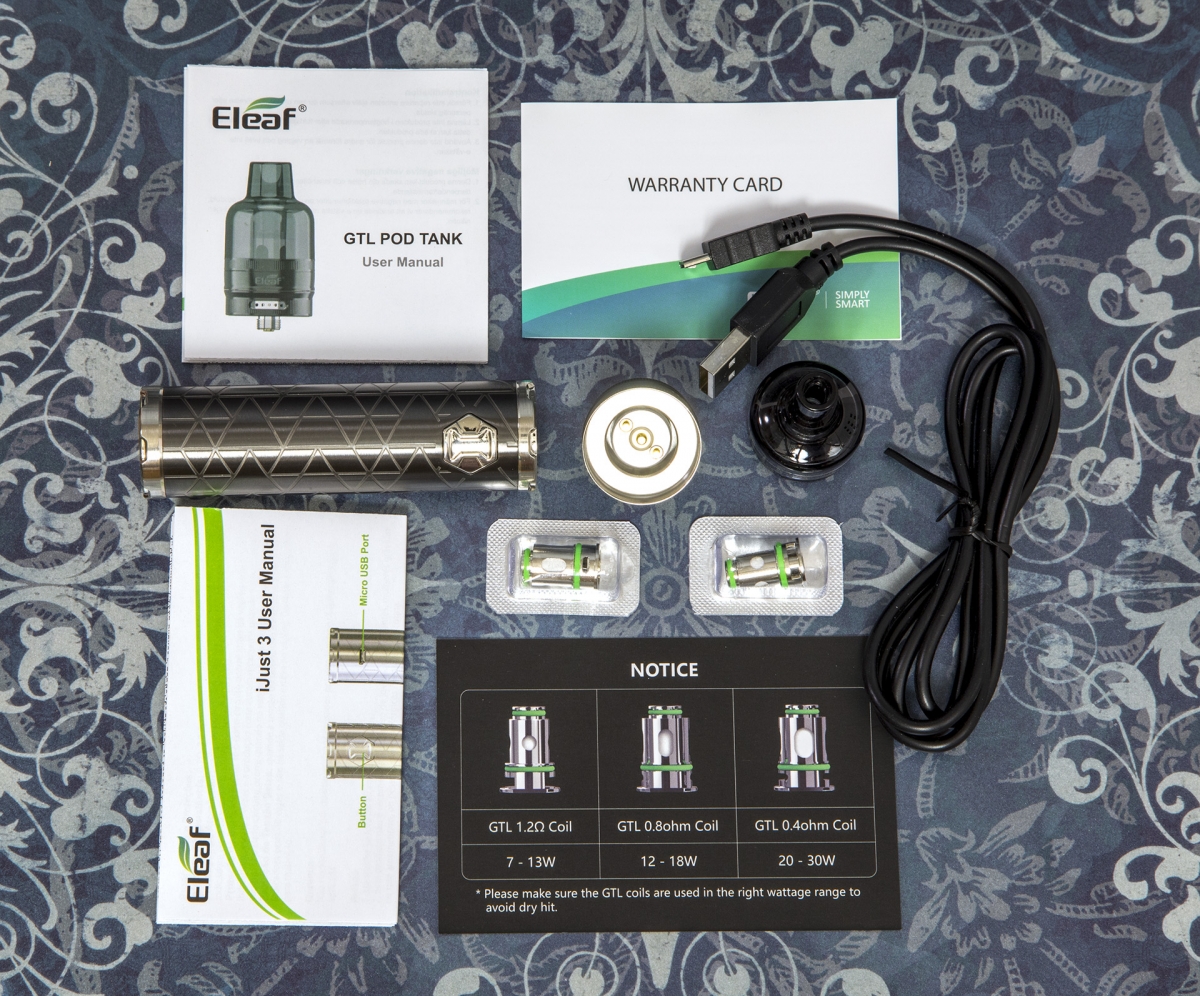 The iJust 3 GTL kit is a very nice looking bit of kit, especially the battery section, it's a good example of how to make a round tube look appealing. 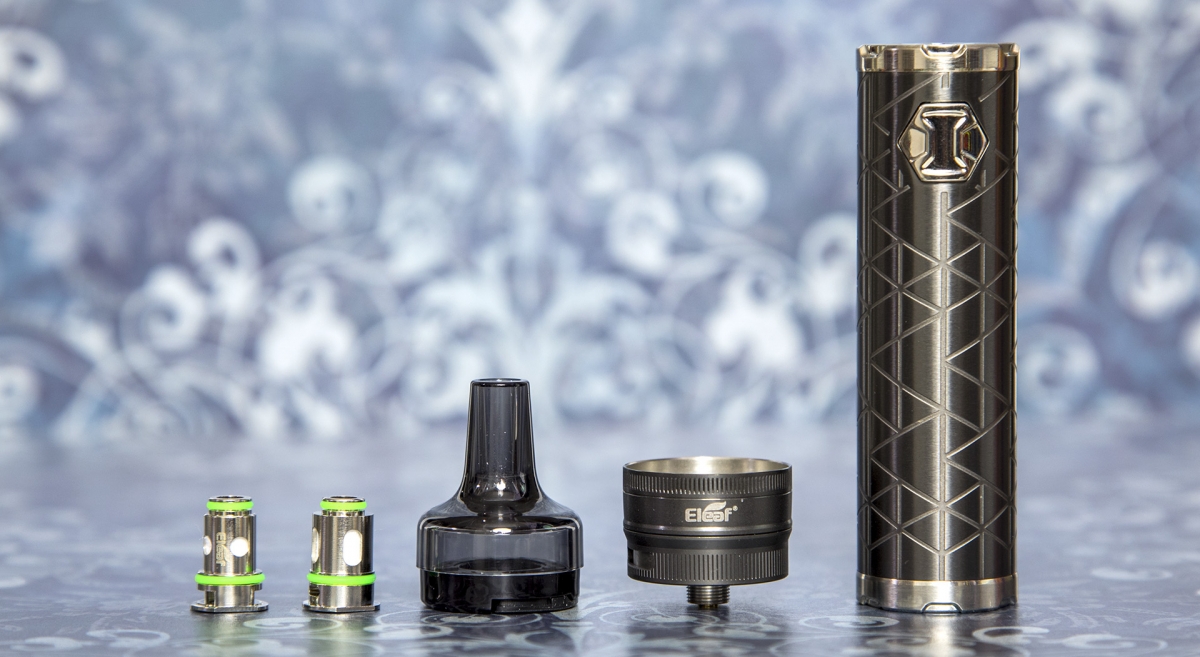 It’s nice to see that the pod housing is a 510 connection so you can also pop it onto other mods. The pod is pretty basic with a fixed mouthpiece, but you get two options of the new (and rather decent) coils to suit RDL to full on DL. 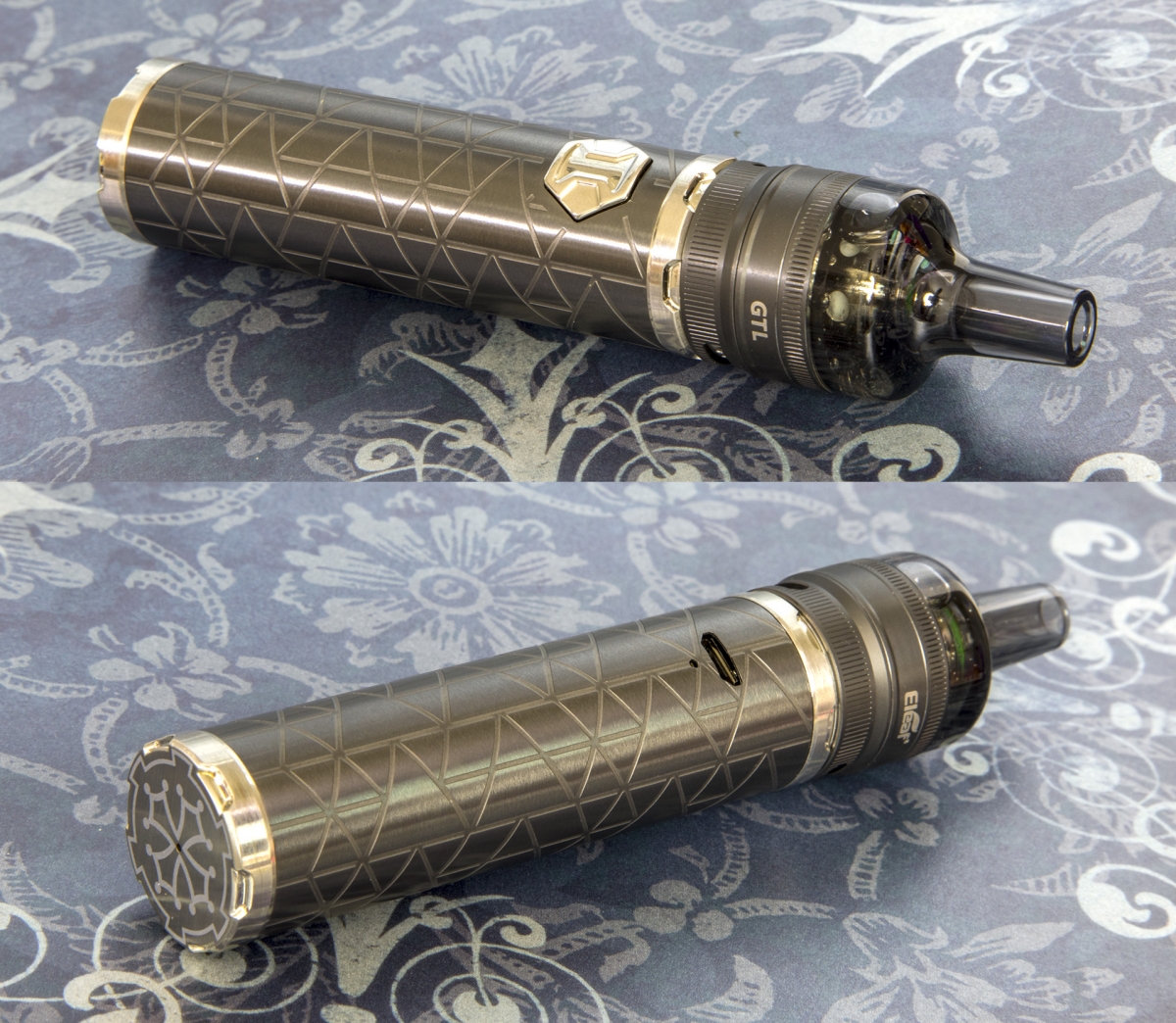 Ergonomics wise, you can’t really go wrong with a tube mod, there’s no hard edges and the fire button protrudes nicely so you rarely have to fumble around to find it.

They have gone to town with the battery section, there’s not one plain face on it, even the top and bottom have some fancy etching. I really liked the look of it in general, even the pod suited the looks, though I wish they had narrowed it down to the same diameter of the battery but it isn’t far off.

This is basically a tank with a different construction rather than a pod in my opinion, it looks far more traditional than a lot of pod efforts, the dual sided airflow control in particular. It has a series of holes and a wide bore slot which offers the full range of airflow that you need. 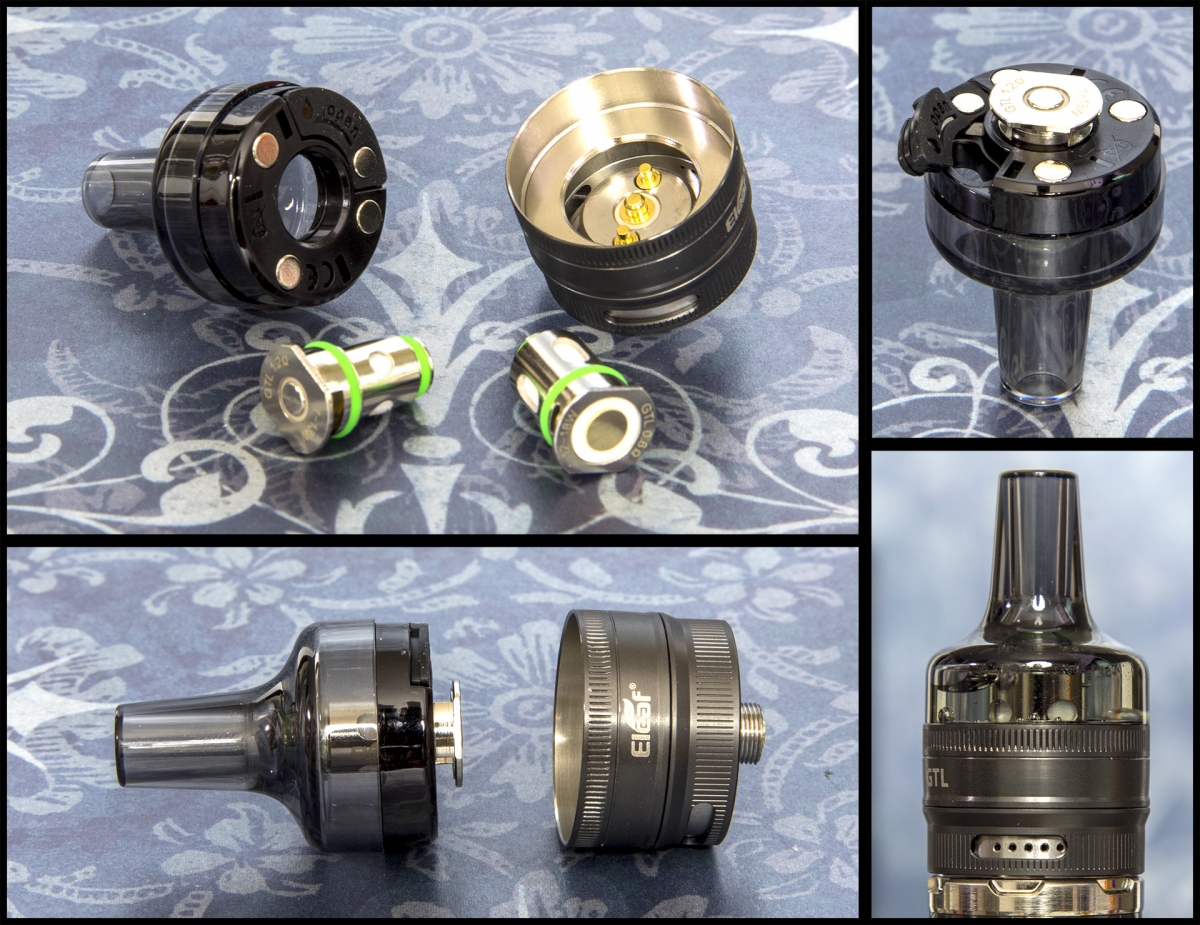 Filling is achieved via a silicone bung on the base of the pod and is wide enough to take any shortfill bottles I tried. It’s easy to see your juice level as you fill it up and is generally mess free unless you screw up.

There’s just something about this pod that doesn’t look like a pod. I can see why Eleaf decided to pair it with a traditional mod and the iJust 3 was a good choice in general.

This is the worst part of this kit in my opinion, the iJust 3 battery is so bloody basic. Here’s a full and extensive list of the controls:

That’s your lot. Impressed? I certainly wasn’t. I get that it is mech style, but previous Eleaf mods at least had limited power adjustment options, hell even the iJust Mini had three variable power options, and to me that makes a difference. The iJust mini is a lot older so Eleaf certainly had the know how to included it, so I was left a bit disappointed that they chose not to. 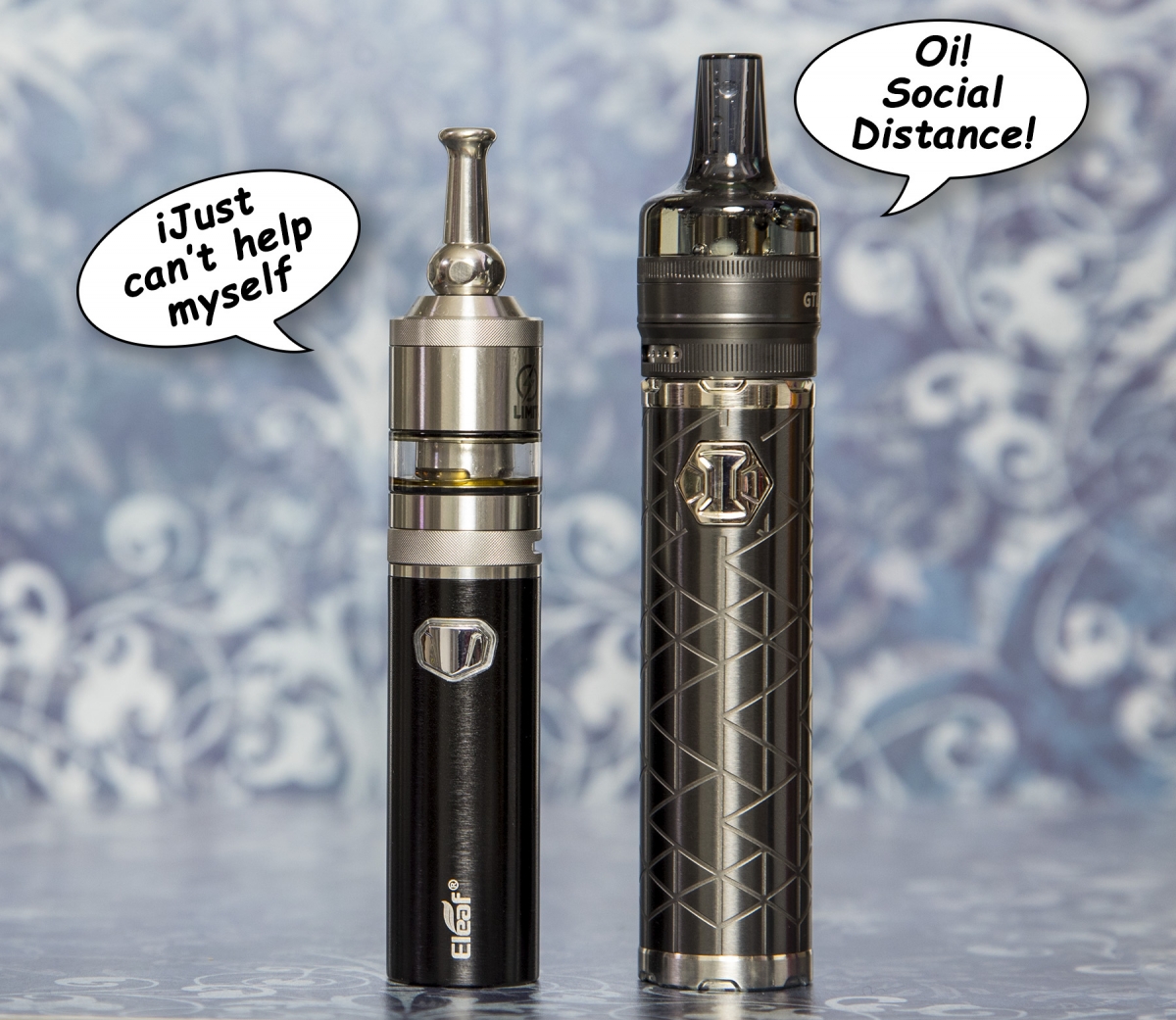 Mech and BYPASS fans will likely enjoy it though. I generally enjoy Bypass for DIY RTAs, and this mod will do just fine for most of my other tanks and it will take 24/25mm tanks nicely.

In fact I was pretty pleased with the 510 connection, and the styling made a lot of my other tanks look really good on the iJust 3. I’m not really a fan of gunmetal as I struggle to match tanks with it as most of my collection are silver/SS, but the mod had stainless steel contrasts with the top/bottom and fire button so silver looked matchy. 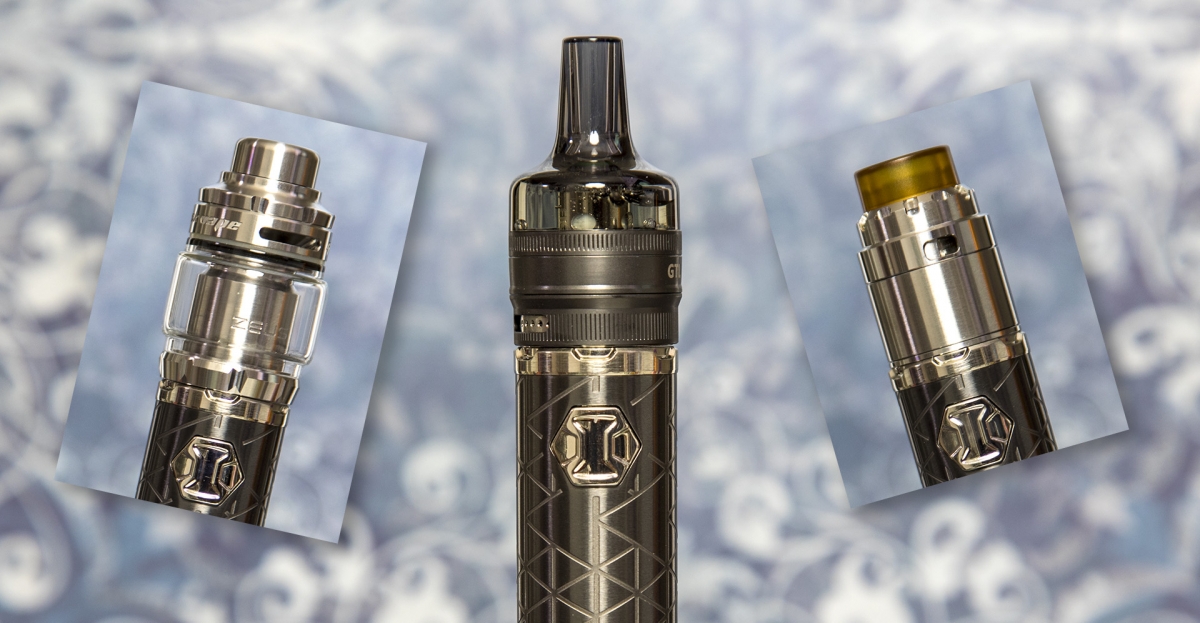 There’s plenty of power to fire up most sub-ohm tanks as long as you build to suit around 60 watts. You can go up to 80 watts builds, but a single cell mod isn’t really suitable for that.

I mostly enjoyed it as a dripper, there’s something about a tube mod dripper that makes it more enjoyable, and since I was reviewing some juices, this was perfect.

But this kit isn’t about the mod so let’s get back on track with the kit….

So I randomly decided to attempt MTL with the GTL 1.2ohm coil first. I didn’t have high hopes as the mouthpiece is a bit too wide bore but figured I would give it a go. It was surprisingly good, though I had to close the airflow off completely for a proper tight draw. Although I prefer a narrow bore drip tip, I didn’t mind it too much, I was just impressed that this kit could handle MTL for what I perceived as a DL sub-ohm kit.

As expected, this kit performed better as a DL/RDL kit using the GTL 0.8ohm coil as it gave a warmer vape and better vapour production using 70/30 juice. It wasn’t the most airy draw even with the airflow fully open, but the flavour was lush. Eleaf have started producing some great coils recently and I enjoyed both of these.

I then decided to switch juices to nic salts with this coil and try MTL again. It turned out even better than the 1.2ohm coil for warmth and flavour, it also gave a superb RDL vape in this configuration.

Eventually the penny dropped to the strengths of this kit, simply put I would say it’s an RDL/MTL kit, which makes sense when you see the two coils that Eleaf included, 0.8ohm and 1.2ohm coils are hardly sub-ohm cloud chucking DL choices and the mouthpiece was also too narrow for full on DL.

By now I was enjoying the vape very much from this kit, it still seemed an odd choice of mod though. I would have much preferred a 22mm setup with three power settings.

Having recently reviewed the Eleaf iSolo AIR and loved it, they appear to use the same coils but I’m somehow getting more flavour from this kit. If I had to pick one, ‘I-just’ would go for the iSolo Air though as it has more functionality and sooooo frikkin tiny!

To be fair, I’m quite glad I have both and the coils are cross compatible. 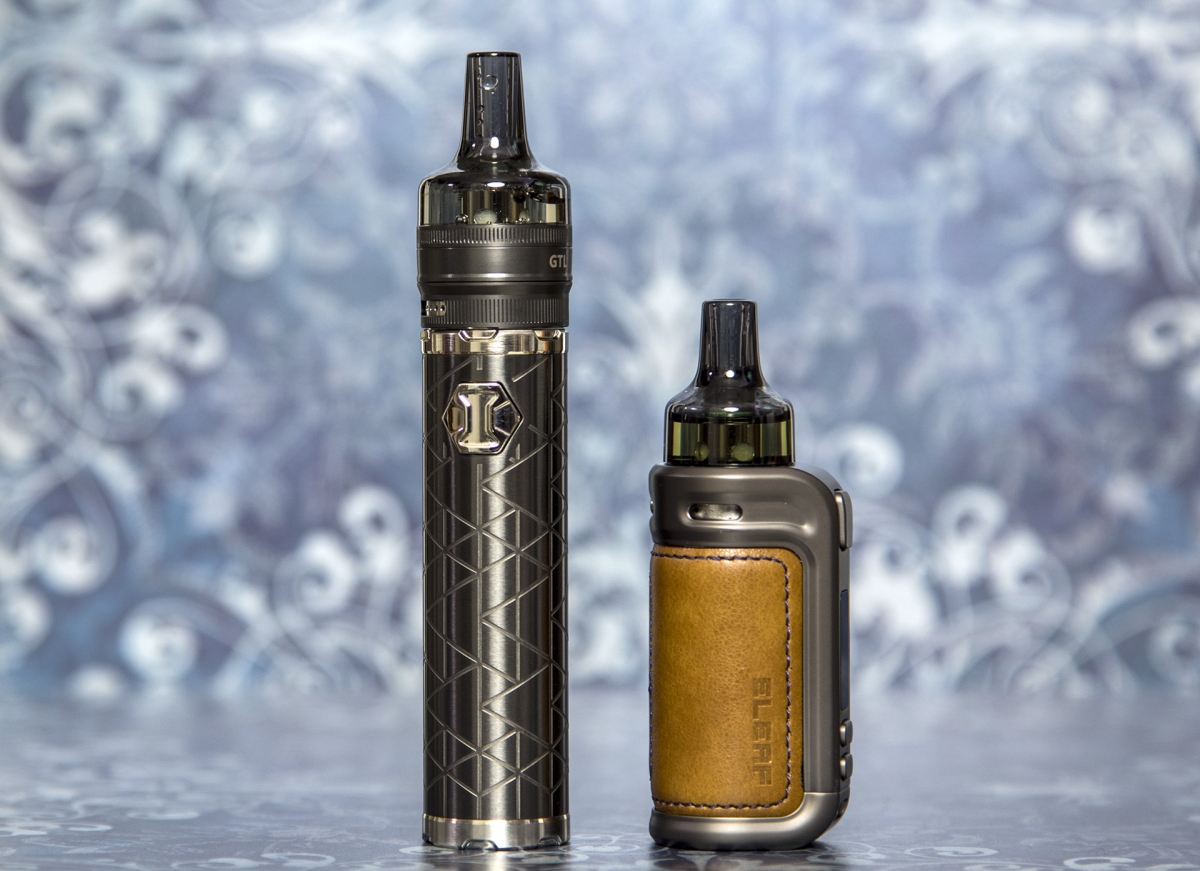 The 3000mAh battery life lasted me almost three days! Even as it was getting low, the power delivery didn’t drop so much that I couldn’t vape it, obviously this is mostly due to the high ohms coils demanding less power.

Charging from almost drained took just over an hour as it has 2 Amp charging.

I think Eleaf’s recent coil improvements have woken them up to more possibilities with their kits. This kit feels like Eleaf thought ‘this GTL pod would look great on the iJust 3 battery’, and to be fair they were right, it does look the mutts nutts, but I think they should have pulled back and improved the battery with variable power levels.

Expecting a full on sub-ohm cloud chucking DL kit? You’re in for a disappointment, but there’s a strong chance that Eleaf will bring out coils around 0.2ohms – 0.3ohms for this tank (there’s a 0.4ohm already) which will open up this kit to DL users more.

Enjoy RDL and MTL? Then you might be surprised how well this kit meets your needs. The mouthpiece might be off-putting though, that said I’m a fussy [email protected] when it comes to MTL, and I’m satisfied with this kit in general.

Now I am properly surprised when I got to the pros and cons, I was expecting more cons than this, to the point I went back and read through to see what I had missed. It turns out that despite the basic as f**k mod, this kit is really pleasing to use. I’ve really enjoyed flip-flopping between MTL to RDL and I love the flavour I get from both coils, the 0.8ohm especially.

This actually makes an ideal starter kit, one of the simplest to use and a half-way house between a pod and a mod/tank kit, in fact I class this as a mod and tank due to the 510 connection. 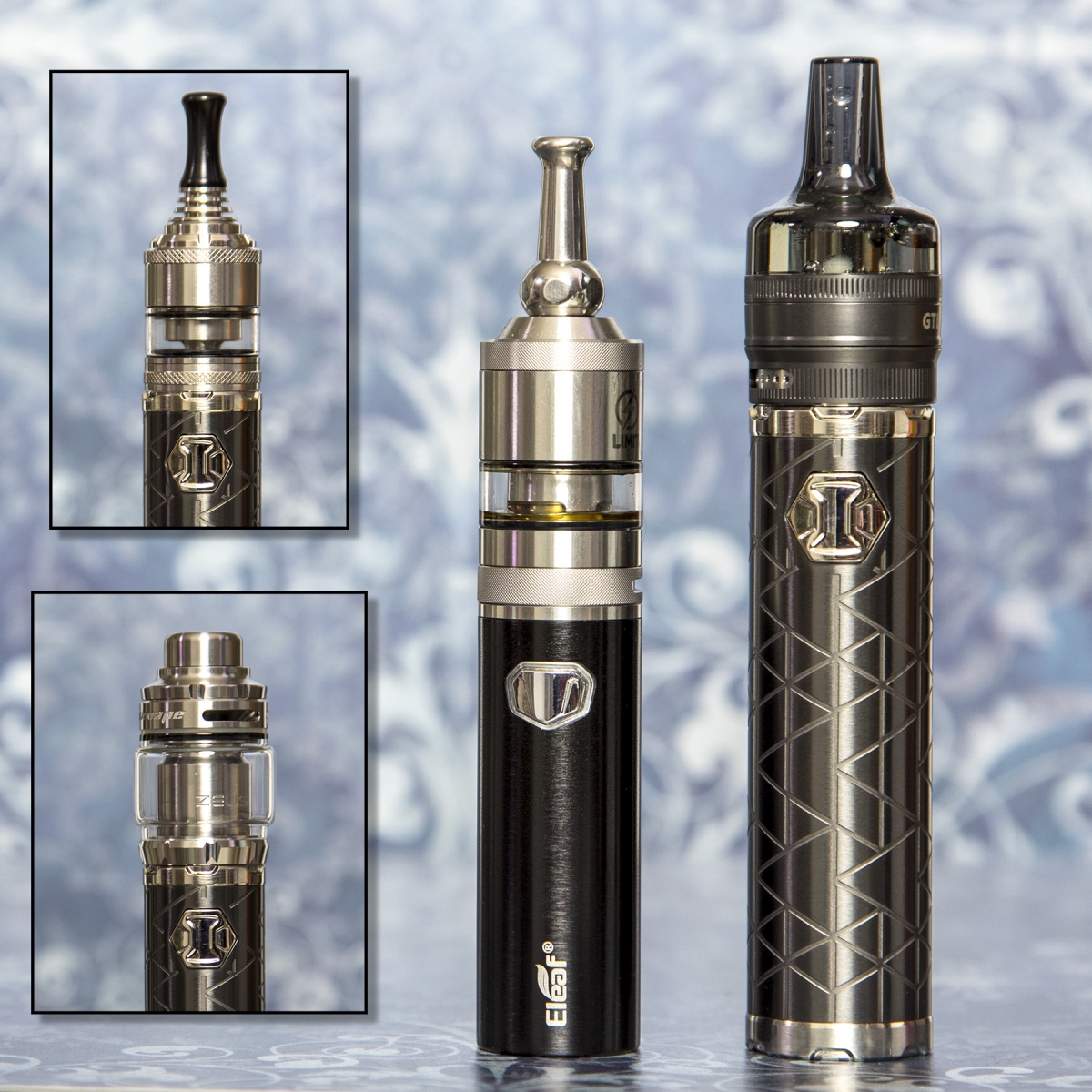