The Electronic Cigarette Company got in touch to ask if we’d be interested in looking at the new Vaporesso Target 100 kit, an update to the Target 80 kit but now using a removable 21700 instead of a built in battery. I recently reviewed the Target 80 kit and came away from that quietly impressed, so much so that it has since become one of my “go to” devices over the past three months, plus I’m a sucker for single 21700 mods so I was the first to stick my hand up when this was offered out for review. 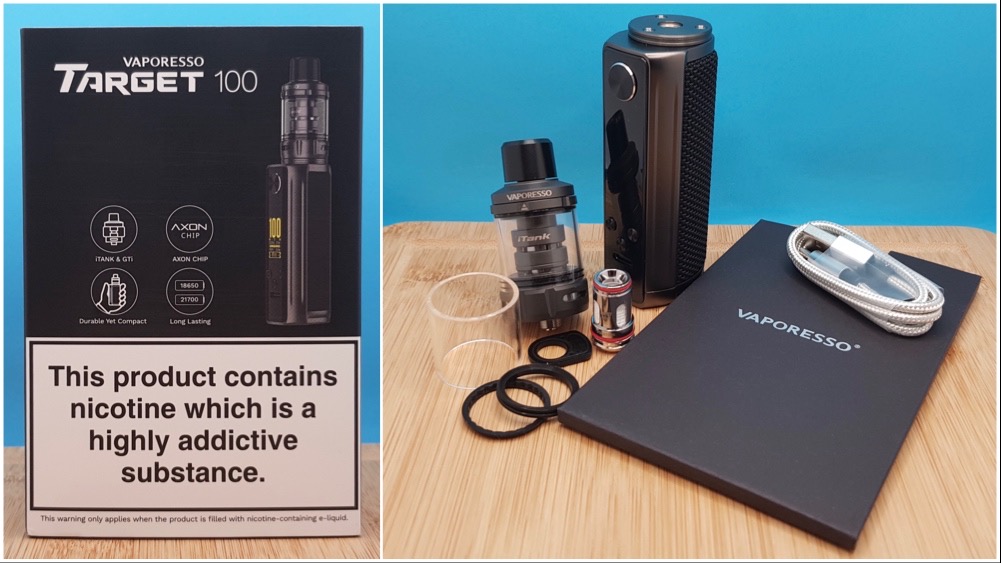 In the Target 100 kit you get the Target 100 itself in your chosen colour, the new iTank, plus two GTi Coils, spare o-rings and a usb-c charge cable along with the usual paperwork.

The Target 100 currently comes in five colours, they all have a gunmetal finish frame with a coloured water resistant braid (fabric) side panel rather than the hard plastic side panels found on the original release of the Target 80, mine came with classic black panels. A refreshed Target 80 kit will also be available sporting the same new fabric panels and the iTank. 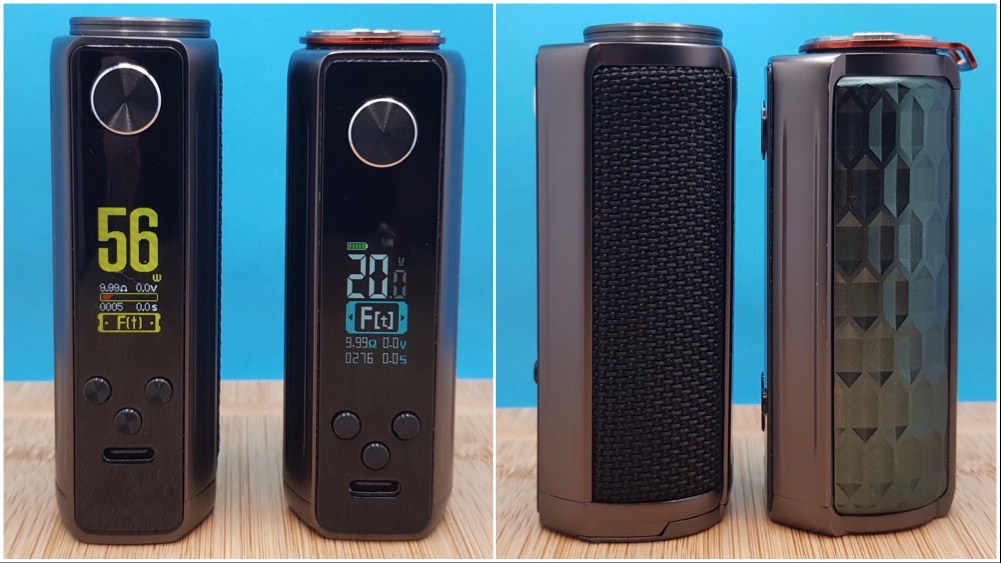 The Target 100 follows the same overall design principle as the Target 80 with a triangular gunmetal frame with large colour panels on each side. The new woven fabric side panels have a fairly coarse weave giving them a pretty rough texture which I wasn’t a fan of initially, but after a few days use I have gotten quite used to them and it now feels like a big improvement over the original hard plastic panels found on the Target 80. Once again, this feels perfectly balanced in my hands and is perfect for both trigger and thumb firing, and the grip afforded by the fabric panels means that it never feels like this is going to slip out of your hands.

The spring loaded 510 plate is lifted up off the main chassis to give the illusion that the overall height is smaller than it actually is. This now has a gunmetal finish like the rest of the outer frame so you might want to consider using an atty gasket to avoid any scratches this time around. I measured this out at about 24.6 mm in diameter (with my crappy plastic calipers) which seems like an odd choice but most “25mm” atomisers are actually slightly under 25mm so most of the tanks I put on here fit just fine with no overhang and at least the silly lanyard clip has gone.

The most obvious change however is the switch over to a replaceable 21700 battery. This is accessed through a flip open panel on the bottom of the mod with any battery slack being taken up by the spring loaded contact at the bottom of the battery tube. Battery polarity is only marked with a stamped minus sign on the battery door contact and this could have been made much clearer, a simple plus sticker at the opposite end of the battery tube would have been a big improvement! Having said that, this passed both of my oversized battery checks so you shouldn’t have issues with thick battery wraps and the like.

On board charging is done via the usb-c port on the front panel with 2 amp capability. In my test this only reached a peak 1.4 amp charge, but it is there should you need to use it. 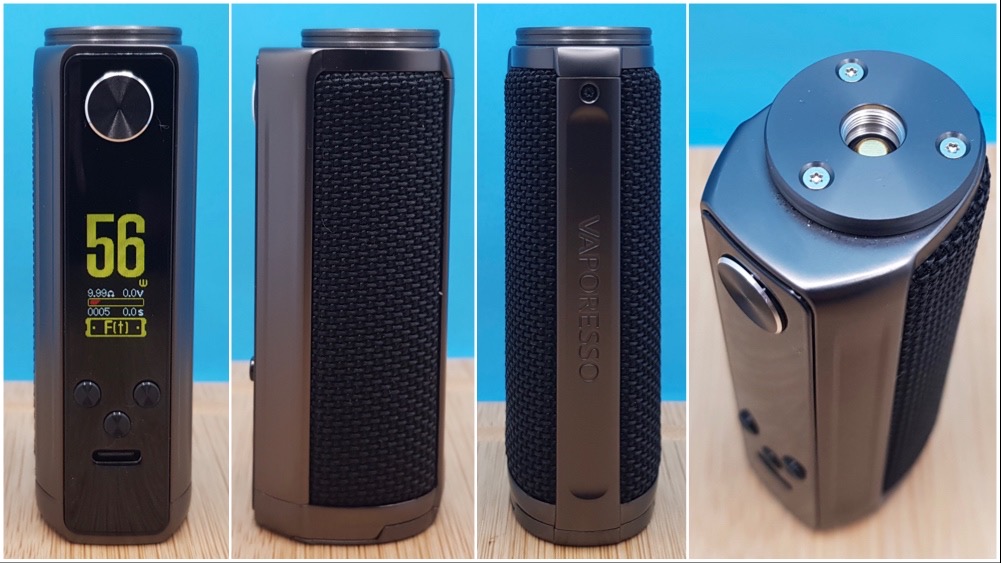 The Target 100 mod is a masterclass in design from a size perspective. Making the jump from an internal 3000mah battery on the Target 80, which is a fairly compact mod to begin with, I was expecting the Target 100 to be substantially bigger but somehow Vaporesso have managed to make it 2mm narrower from side to side and 1mm narrower front to back whilst only adding about 2mm to the overall height! The weight with a battery installed is roughly the same as well.

Unfortunately the user interface seems to have taken a step backwards as you now only have 1 watt adjustments vs the 0.5 watt adjustments on the Target 80. The information displayed on screen also doesn’t look as clean and, although the wattage setting is now much more prominent, everything else is smaller and much more difficult to read. I honestly don’t know why this has been done, the original was perfectly clear as it was and I much prefer the original layout.

User interface aside, you still have access to the excellent F(t) and Pulse modes which apply a small variable power curve on top of your selected wattage, and these do seem to enhance the flavour with some atomizers versus the standard wattage setting. Buried in a sub menu, you also have variable voltage (adjustable in 0.1 volt increments) with an impressive 9 volt output and a bypass mode as well. 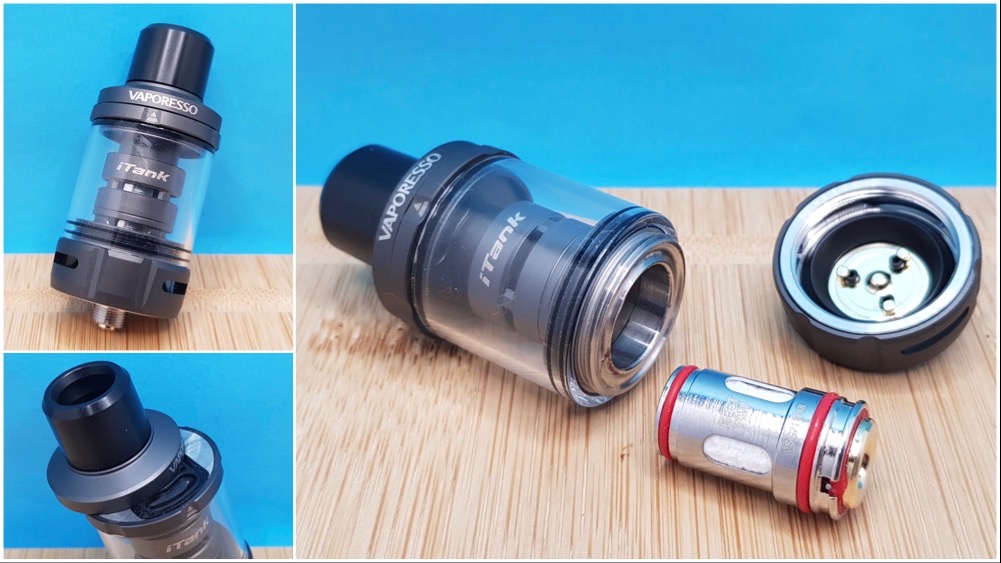 Vaporesso have a brand new tank and coils to go with the Target 100, the iTank and GTi Coils. This uses coils press fit from the bottom as with most modern sub ohm tanks and these are easy to install and remove.

The top cap slides away to reveal a fill port gasket and there’s a decent amount of tension here so I wouldn’t have any worries about it accidentally coming open in pockets. The fill port itself isn't the biggest so you may struggle with some e-liquid bottles, and with larger bottles in particular you may need to remove the pressure fit (delrin?) 510 drip tip. The top cap can also be removed for cleaning or to replace the fill gasket but take note as this is reverse threaded.

On the base there is a triple cyclops airflow system, there is a bit of excess movement in the afc (more of a wobble up and down) but good tension so it’s not going to move from your desired setting, and there are end stops at the fully open and closed positions. Even fully open, there’s a hint of restriction which I found particularly pleasant.

As the kit I was sent was from The Electronic Cigarette Company here in the UK, my iTank came with the dreaded TPD bung installed, thankfully this isn’t too difficult to remove. The glass is held in place with two o-rings and needs to be slid down past the lower o-ring, mine was stuck on like a limpet and I had to resort to using rubber gloves to get things moving but not before I discovered that those threads on the base of the tank are razor sharp which resulted in my hands sporting several fairly deep cuts so be warned! Once you have access to the bung it can be unclipped by running a fingernail down the seam on the sides and finally removed giving you access to the full 5ml capacity.

The Vaporesso iTank uses a brand new press fit coil, the GTi Coil system, with a 0.2ohm and 0.4ohm coil included in the kit and a 0.15 ohm coil in the works. These are both modern mesh designs but I couldn’t find any information on the actual coil material so I reached out to Vaporesso and they were kind enough to let me know that these are Nichrome.

Normally I wouldn’t use these thanks to my nickel sensitivity but as this is a brand new coil type, I thought I should at least run a couple of tanks of e-liquid through each so I could give you my impressions:

Both coils performed extremely well at the recommended wattages producing bags of clean, crisp flavour. For me, they both needed the airflow fully open at these wattages due to the slightly restricted airflow. One downside of this is that there is a distinct whistle with the airflow fully open which is ironically where the best performance lies with the coils. Obviously the 0.4ohm coil is probably better suited to the Target 100 because of the lower 55 watt power requirement, where the 0.2 ohm coil is probably better suited to a dual battery setup.

I’m a big fan of the Vaporesso Target 80 and if the internal battery was holding you back, then the Target 100 with its external 21700 support is a great alternative. The updated water resistant braid (fabric) side panels are a great addition as well and, although the user interface seems to have taken a step backwards, it’s still easy to use.

I thoroughly enjoyed my brief dalliance with the iTank but thanks to my nickel sensitivity I simply can’t continue to use it long term and even with just a few hours use I could feel my tongue beginning to tingle and swell…. Please can we have a Kanthal coil Vaporesso!?

Many thanks to The Electronic Cigarette Company for sending the Vaporesso Target 100 kit out for review. 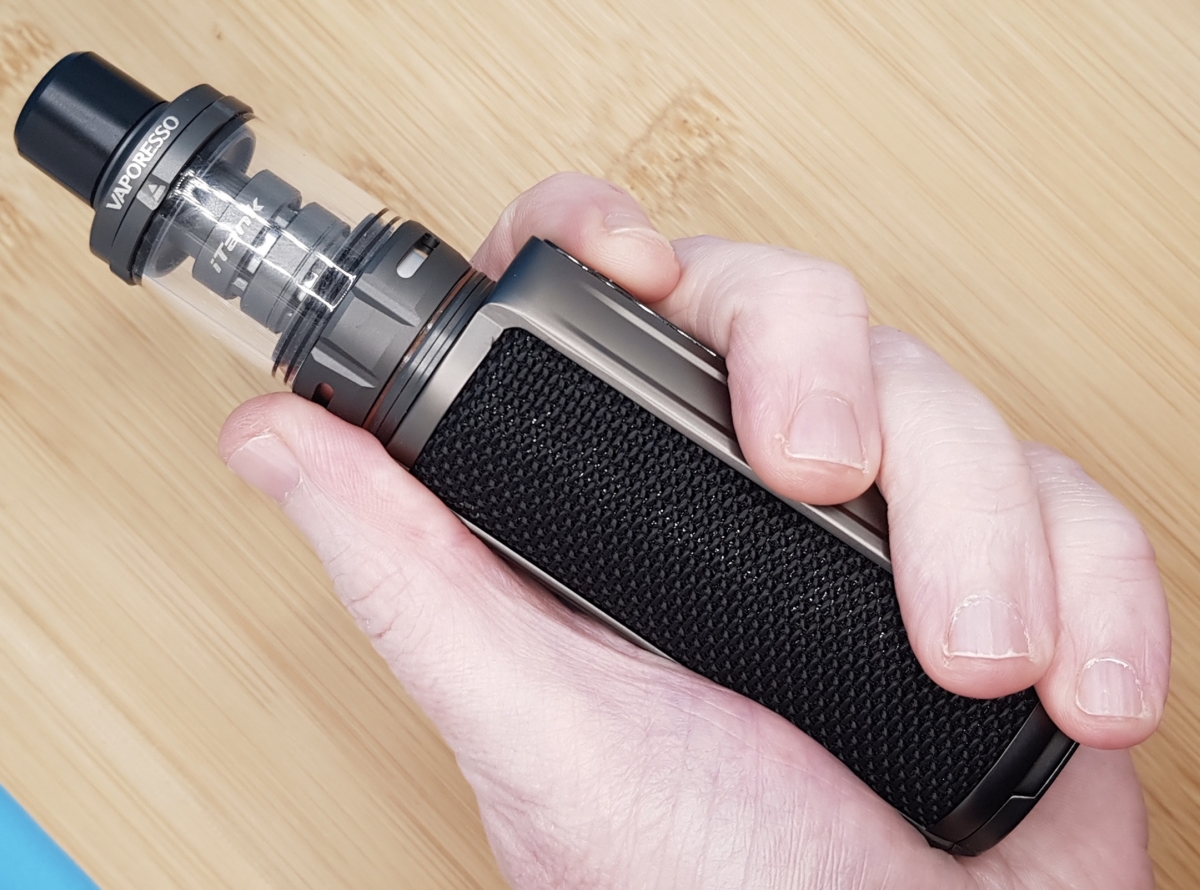