Vaporesso got in touch with us recently and asked if we’d be interested in taking a look at their upcoming 80 watt pod/mod kit but wouldn’t spill the beans on what they were sending beyond that. As I haven’t reviewed any Vaporesso products up to this point, I decided it was high time I took a look as a couple of my fellow regular reviewers seemed to be enjoying the kits they’d been sent previously. I was expecting yet another basic direct lung pod kit so imagine my surprise when the Target 80 kit arrived with a separate pod/tank and a full blown mod complete with an actual 510 plate! 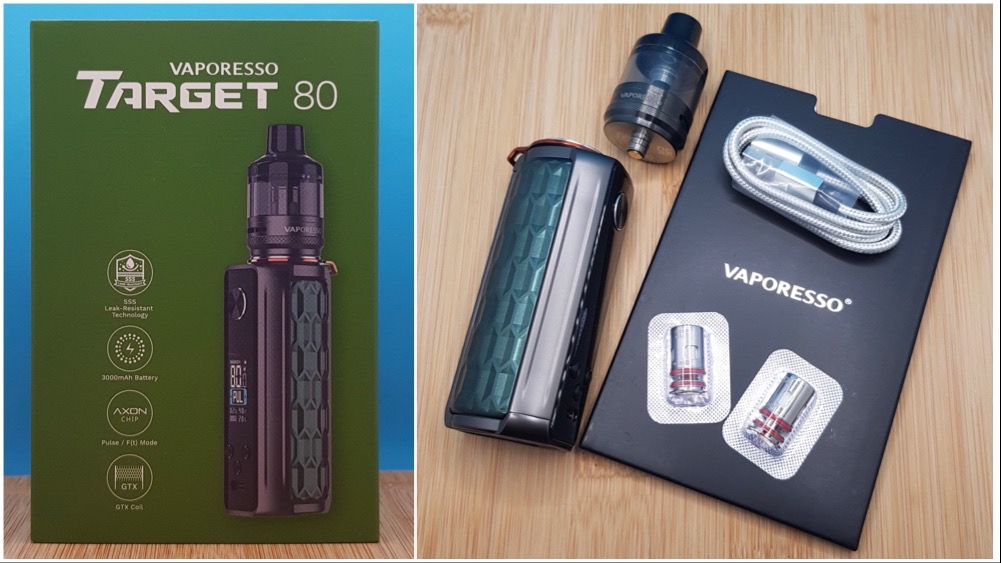 Inside the box you’ll find the Target 80 mod in your colour choice, a GTX Pod tank, two GTX Coils, a braided USB-C charge cable and the usual paperwork. The Target 80 kit is available in five colours (black, grey, blue, green and red), and they all come with a gunmetal frame with coloured side panels. I was sent the green version for review. 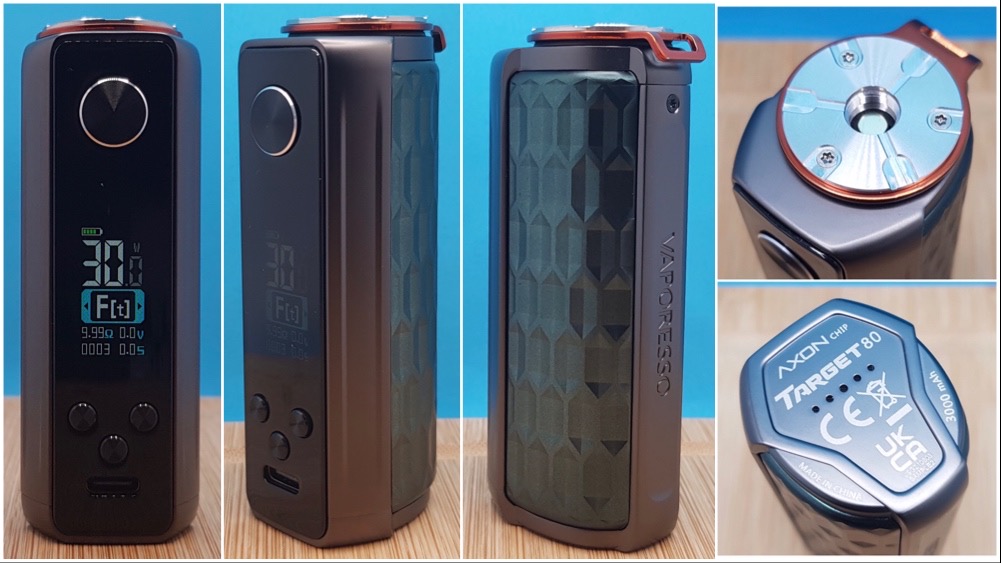 The Target 80 mod was something of a pleasant surprise when I removed it from the box, not only is it a proper full blown mod rather than a pod which is what I was half expecting, Vaporesso have managed to cram a 3000mAh battery into a fairly small package and at just a hair under 130 grams, it’s not too heavy or cumbersome either.

The outer gunmetal finish frame forms a triangle around the rigid plastic side panels which have a diamond cut finish, this is super grippy and feels very comfortable in use and I also appreciate the understated branding as well with just a simple Vaporesso logo running down the spine of the outer metal frame. The triangular design was apparently chosen to keep the mod more stable on flat surfaces whilst still allowing Vaporesso to increase the battery capacity by over 30% and simultaneously reduce the size over previous designs. They’re also pitching this as a durable mod and whilst it doesn’t have any sort of iP rating, they have apparently drop tested this from 1.5 meters. This may also explain the lanyard section at the top which brings to mind camping and climbing equipment and other rugged outdoor pursuits.

On the bottom you get some additional branding and some emergency venting holes just in case. You can really see the triangular frame design from here as well.

On top there’s an actual full spring loaded 510 plate, there are even cutouts running all the way from the outer edge to the centre of the plate for those of you still using tanks that need this (is there anyone still using this style of tank?) but I rather suspect they were put there more for aesthetic purposes rather than for functionality. The whole 510 plate is screwed into the top of the triangular outer frame with three screws which Vaporesso claim should make this stronger and more durable in day to day use. Two aspects of this that you may or may not be so keen on though are the integrated lanyard holder immediately under the 510 plate and the relatively small size of the 510 platform, this is just 24mm across so anything larger than this will overhang, some 25mm atomizers don’t look too bad here as the top section has a very stepped appearance anyway but it all depends on how OCD you are in these matters.

The front panel features a bright 0.96 inch colour screen and all the information you need is very clearly displayed. As a gentleman of a certain age, I especially appreciated the large wattage readout as I can actually manage to see this without my reading glasses! It’s almost bright enough to be read in direct sunlight as well (yes we actually do get some sometimes in the north of England). There’s a large metal power button on top and three smaller plastic buttons below for menu selections and adjustments, these all have a nice tactile feedback with zero button rattle.

Under the controls there’s a USB-C port for charging with onboard 2 amp charging. In my tests, this hit a peak charging rate of 1.95 amps with a total recorded capacity of 2807mAh in just 1hour and 38minutes.

The menu system is new to me as this is the first Vaporesso mod I’ve used in quite some time. This is all powered by their new AXON chip which has a couple of features I hadn’t encountered before. Out of the box this defaults to what Vaporesso calls F[t] mode. Two other modes PUL and VWN are selectable by long pressing the menu button, and all three modes are adjustable from 5 to 80 watts in 0.5W increments.

Unsure what was going on, I did a little digging around online and found that VWN  is Variable Wattage Normal (i.e. a straight up wattage mode), PUL is PULse mode, and F[t] appears to be a newer, more advanced variant of PULse mode. The PUL and F[t] modes are supposed to enhance your flavour experience by rapidly varying the power supplied to the coil, but I’ll cover my experience on those a little further on.

There are additional modes available but those are hidden in a sub menu which is accessed by clicking the menu button three times and selecting the “DIY mode” option. From here you can access VWS (Variable Wattage Soft), VWH (Variable Wattage Hard), VV (Variable Voltage), and BP (ByPass) modes. I find it a little odd that these are buried in a sub menu like this and I rather suspect most users will never even realise they even exist! For the voltage users out there, this is adjustable from 0.1 volts all the way up to a heady 9.0 volts in 0.1 volt increments so this should keep you all happy. 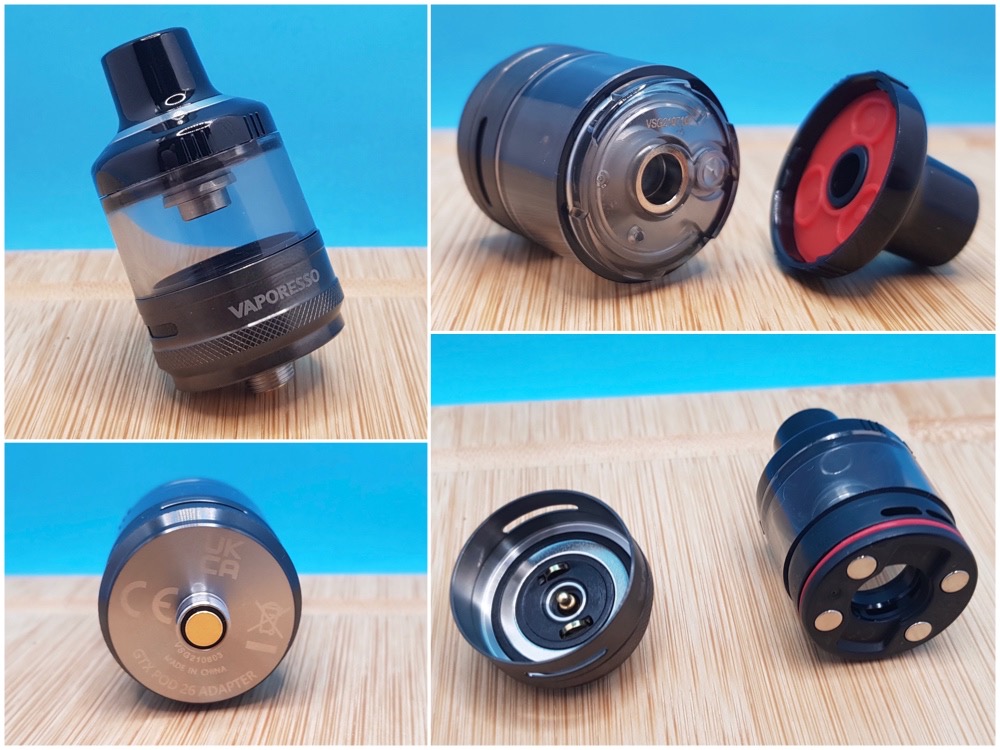 The GTX Pod tank is included in the kit and this is similar to several other pod tanks on the market consisting of a pod section with press fit coils that is magnetically held in a 510 threaded airflow control base. Rather than the airflow being a separate ring on the base, the airflow is actually on the pod itself and the base simply has two cyclops slots cut into the sides. You adjust the airflow by turning the pod rather than the base. Instead of a rubber bung found on similar systems, this has a twist off top cap and is a mess free affair to fill. It can be tricky to undo though, and if you’re struggling I’ve found that adjusting the position of your fingers on the outside of the cap is helpful. There seems to be a sweet spot for getting it undone ( if you’re pressing down on one of the lugs holding it closed, then this compresses the plastic top which causes it to bind to the tank). This does mean that you’ll need to check your airflow after every fill though as there’s a tendency to accidentally turn the tank whilst you're doing this.

The pod features the Vaporesso SSS technology (Seal, Saturate, Store) and uses the triple o-ring GTX Coils found in many of their more recent pod kits which partially separates the airflow and the bottom of the pod reducing the common leaking issues found on push fit pod coils. 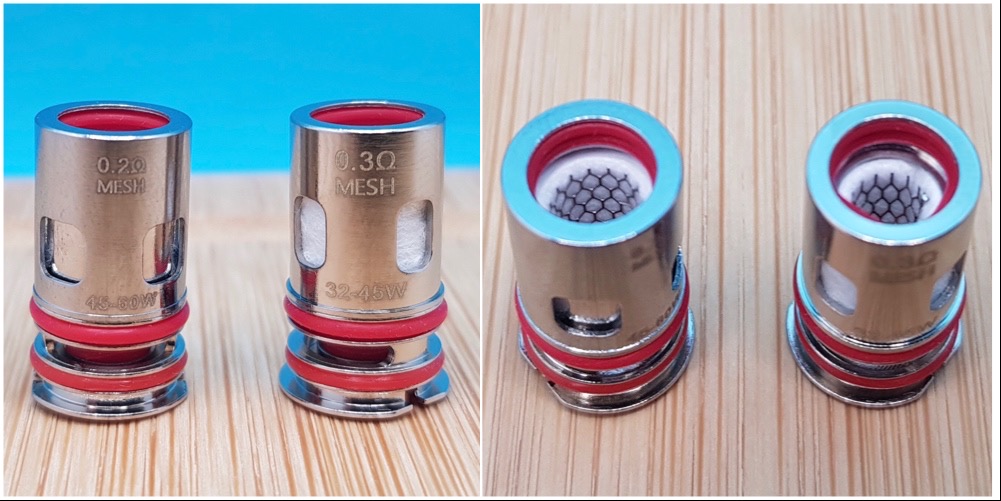 Two GTX Coils are included in the kit, a 0.2ohm and 0.3ohm mesh coil, and the tank is compatible with all the other triple o-ring GTX Coils if these aren’t to your liking. Whilst the wattage range is clearly marked on the coils, the coil material isn’t but Vaporesso have made this easy to find on the GTX Coil page.

As I’m nickel sensitive, this means that I can’t use the lower ohm direct lung coils, or at least not for any length of time. I did on this occasion put a couple of tanks of e-liquid through both the included coils so I could tell you what my experience with them was like and touch on those F[t] and PUL modes as well.

The 0.2ohm coil has a slightly more open draw and is rated for 45~60W. I found that this performed best at 55W with the airflow three quarters open with a nice saturated and flavourful vape. This would definitely be my choice if it weren’t NiCr!

The 0.3ohm coil had a tad more restriction and is rated for 32 to 45W. I found that this performed best in the 40 to 45W range but although the flavour was decent, I didn’t feel it was quite as good as the 0.2ohm coil.

Bearing in mind that both of these coils are Nichrome and not wanting to risk a mouthful of ulcers, I swapped these out for a 0.6ohm (KA1) GTX Coil I had from a kit I received at XMAS and didn’t get around to using. This is rated for 20~30W and has a much more restricted direct lung draw than either of the included coils. I found this best at 26 watts with the airflow just over half open. This still gave good flavour but I just wasn’t enjoying the experience as much, I really wish they did at least one of the lower ohm coils in KA1 as that would suit me much better. 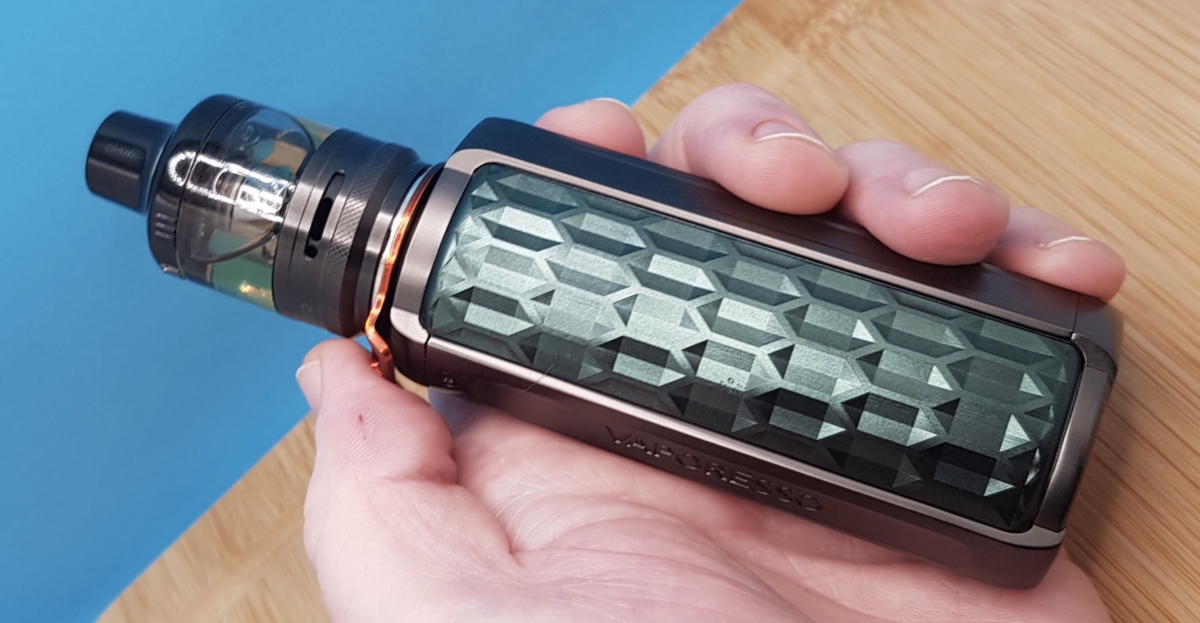 So how did I get on with those F[t] and PUL modes?

I’ll be honest here, after looking up what they were doing I wasn’t particularly looking forward to trying them out expecting something of a roller coaster ride like a particularly bad PWM mod from several years back, but nothing could be further from the truth.

The PUL(se) mode felt smooth and consistent but to be brutally honest, I couldn’t detect any difference from the regular VWN (wattage) mode.

The F[t] mode was a completely different kettle of fish though. Once again the power delivery felt smooth and consistent with no discernible pulsing present, but it did seem to enhance the flavour of my e-liquid as claimed.

Convinced that I was imagining things and that I was only perceiving a difference because I’d been told this is what the F[t] mode is supposed to do, I swapped to an rta with a fused clapton in it and spent the next couple of days swapping between the three different modes. Blow me, the F[t] mode does actually work! It’s subtle but there is a definite difference, qudos to Vaporesso for bringing something new to the table.

I’m actually very impressed with the Target 80 kit. I love the compact mod and the 3000mah capacity is pretty impressive in such a small package, I would have preferred a slightly wider 510 plate in place of the lanyard clip though as there’s plenty of room to spare up top and it could then have accepted a wider range of atomizers. The GTX Pod tank is fairly decent for a pod tank, bear in mind that the lower ohm direct lung coils are all Nichrome though if you’re nickel sensitive. The thing that has impressed me most here though is the F[t] mode and I look forward to trying that again in future devices.

Many thanks to Vaporesso for sending the Target 80 kit out for review.