The Firewater Revolucion Range by Manabush Review by Michelle (Purplefowler)

The Firewater Revolucion Range by Manabush

I have always fancied going to Cuba, the history, the music, the cars, the weather, and the heritage have always drawn me in, and I would love to just absorb it all properly on the streets of Havana. The trouble is I don’t travel well so I have a feeling it will remain an unfulfilled dream. The closest I will probably get is sticking on a Buena Vista Social Club record on my hifi and watching some YouTube videos of classic american cars from the 1050s on in the background. Sometimes we have to just work with what we’ve got. But now, thanks to Manabush, I can at least add some flavour to my makeshift Cuban experience with their Firewater Revolucion range of e-liquid.

In case you have been hiding out like an exiled revolutionary for the last few years, you will already know that Manabush are the experts when it comes to creating exceptional tobacco flavours for the connoisseur vapers of distinction, and the Firewater Revolucion range does nothing to buck that trend. This time round, they take a classic hand rolled fat cigar and mix it up with a very boozy Cuban rum and then add some extra flavours to make this a very unique range which tastes like nothing else out there (apart from the original Firewater range with substitutes the rum for bourbon). As a teetotaller, I love just how strong the rum tastes, just because I don’t drink doesn’t mean that I don’t miss the flavour of a fine liquor.

As with the Manabush Leaf and Diablo Divergent ranges that I have recently reviewed, I was sent the 6mg versions here which is my preferred strength. Because these are complex e-liquids, it is so important that the balance of flavour is not mucked around with, so the boosted shortfill, ready for a single nic shot, really is particularly important here to maintain the full balance of the juice. If you like a different strength, there are also options for 1.5mg, 3mg and 12mg strengths, all of which have been carefully designed to keep the full integrity of the flavour. Simply put, you get maximum flavour at whatever strength works best for you.

The Firewater Revolucion range is 50PG/50VG so is perfect for mouth to lung vaping, and they can benefit from a bit of extra steeping time after adding your nic shot. This is as mess free and as easy as it gets thanks to the brilliant flip nozzle bottles which I just love. I’m not particularly fussed about my fingernails, but there is nothing worse than breaking one trying to mix your juice! 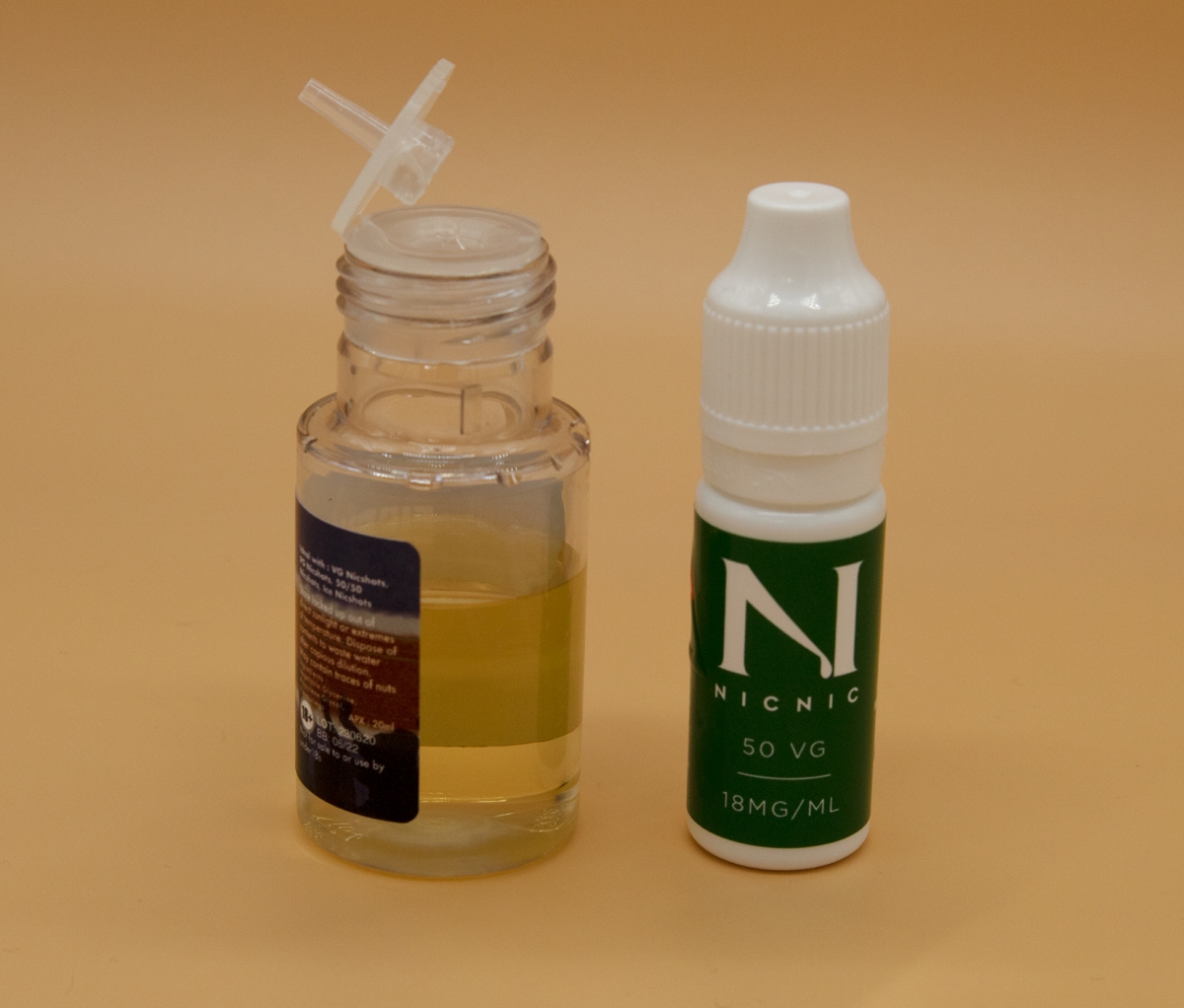 “REVOLUCION - is the core of the range and Is a sublime mix of premium Firewater style cigar blended with Cuban Spiced rum.”

This range follows a natural progression, so I started with base level first. Each one adds to the previous one so it only seemed right to follow the path to see what difference each addition made. Don’t be fooled in to thinking this means this is any less flavoursome or complex as the other two in the range, it just allows a bit more space for the base flavours to shine on their own. As I said above, the rum is proper heady stuff, you would swear there is actual alcohol in here. I’ve had many boozy flavours before, but Manabush are by far the most accurate ones out there, it tastes of really top-quality rum. Captain Morgan can just sail on and leave it to the big boys! Equally bold and finessed is the cigar which has a strong, deep flavour and a throat hit to die for. It is smooth and yet you get a full-bodied rasp which really hits the spot partly thanks to the masterful mixing and partly due to the higher PG levels. Personally, I think a lot of people overlook the benefits of a meaty throat hit, especially in tobacco flavours. 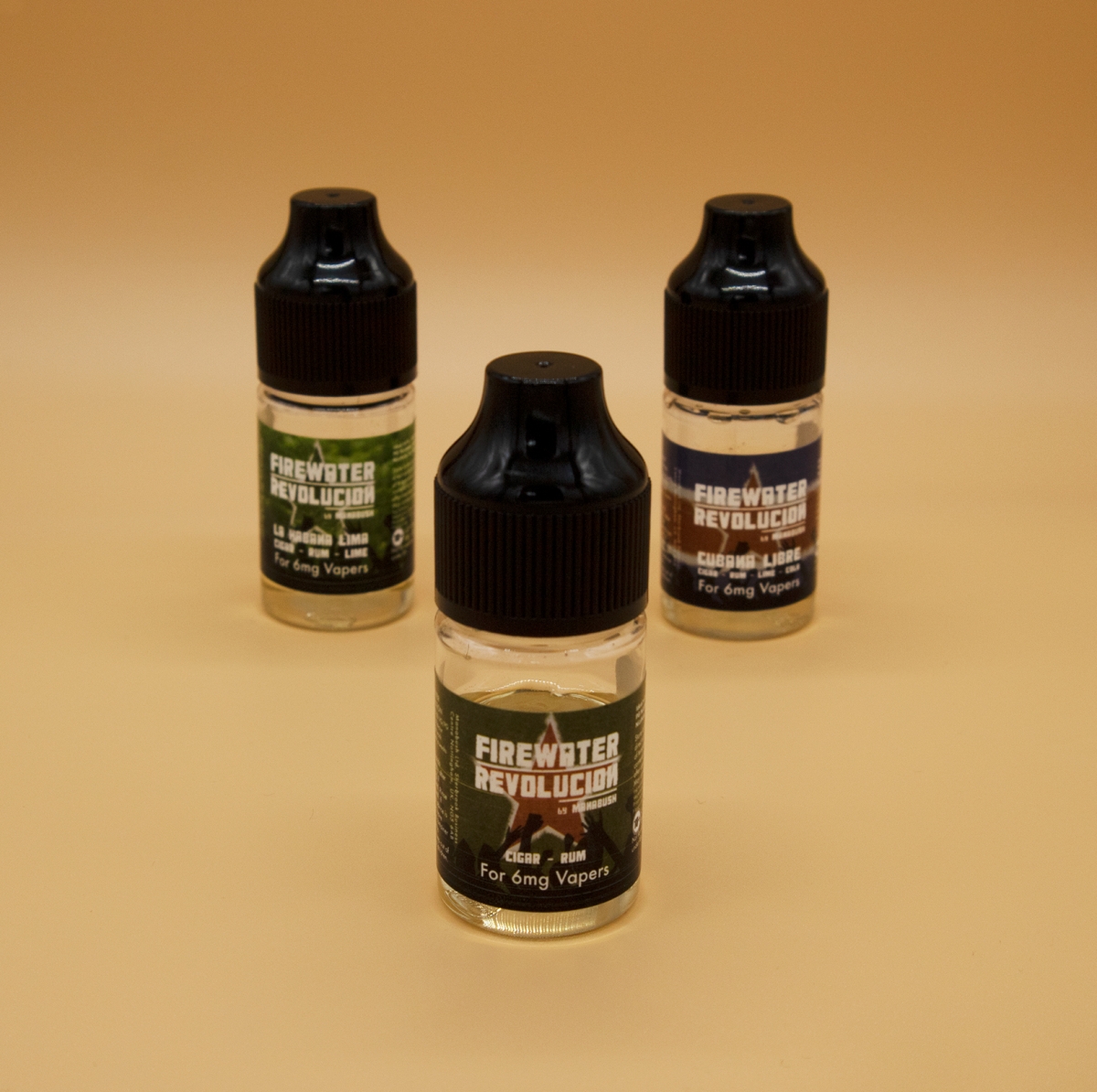 “LA HABANA LIMA takes our base "REVOLUCION" blend of premium firewater cigar and Cuban spiced rum and lightens it with a hint of fresh Persian lime.”

Welcome to level two! This takes everything from the straight Revolucion and adds the perfect amount of lime which gives things an extra citrus kick. It is sharp and fresh but also adds a slightly sweet twist. Not only does it add to the flavour, but it also ramps up that heavenly throat feel. Out of the three, this was my favourite, and I found the bottle just seemed to disappear without me even noticing how often I was topping up my tank. 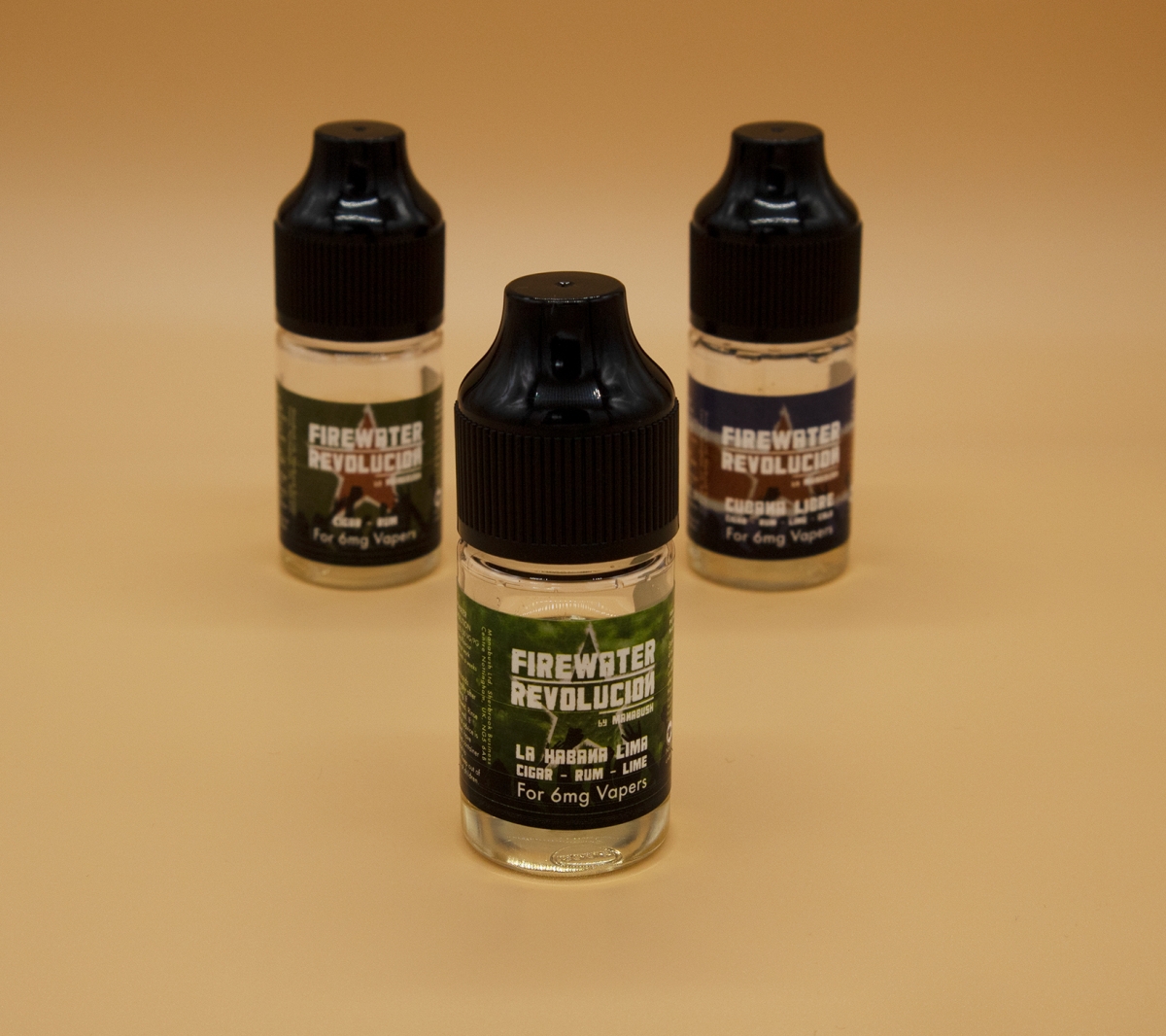 “CUBANA LIBRE takes our base "REVOLUCION" blend of premium Firewater cigar and Cuban spiced rum and blends it with the flavours of a classic "Cuba Libre" Cocktail - Cigar, Rum, Traditional Cola and fresh Persian lime. A refreshing and complex eliquid.”

Here we go with level three, the big guns! After all it is very hard to mount a revolution without a bit of firepower which in this case comes via the addition of some cola. If you read my previous review of the Diablo Divergent range, you will already know how highly I rate Manabush’s cola flavour thanks to it being nothing like commercial canned rubbish. In this juice it brings further depth and an added level of complexity. It isn’t strong enough to distract from the base flavours, but it does enhance everything. Because of the multi-layered tone here, I would choose this more as a special occasion juice to be savoured and enjoyed in the way that you wouldn’t drink your finest rare vintage when you fancy a tipple to finish off the evening on a school night. It is a bit special, and I would prefer to treat it that way. 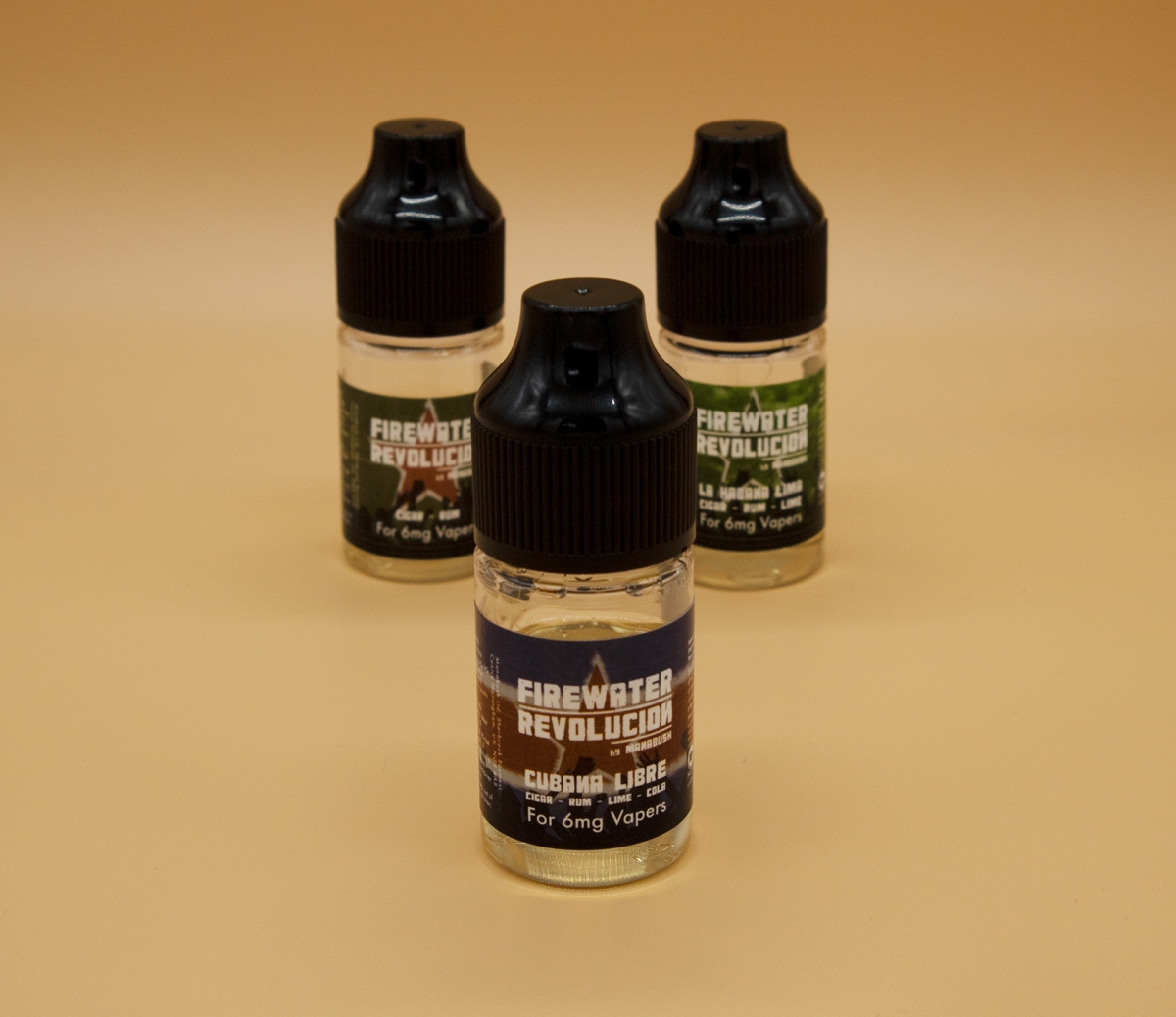 Firewater Revolucion is a range created from passion and fire, it is full bodied and very grown up and because of that, it may not be for everyone. I don’t class that as a negative thing, this is really for vapers who appreciate the finer things in life. There is a romanticism to the range, and I can imagine myself enjoying good food, great conversation, and a tank of any one of this range to round the evening off in style. It is the kind of e-liquid that will make an occasion out of the everyday, and that is a rare thing.

If you fancy giving it a try, you can pick it up direct from Manabush. The 6mg option is £7.49 for 20mg but don’t forget to stick a nic shot in your basket too. Whilst we are still in October, the Stoptober promotion is still running so you can take advantage of the 20% off promotion too which brings it down to the bargain price of £5.99. Viva la Revolucion! 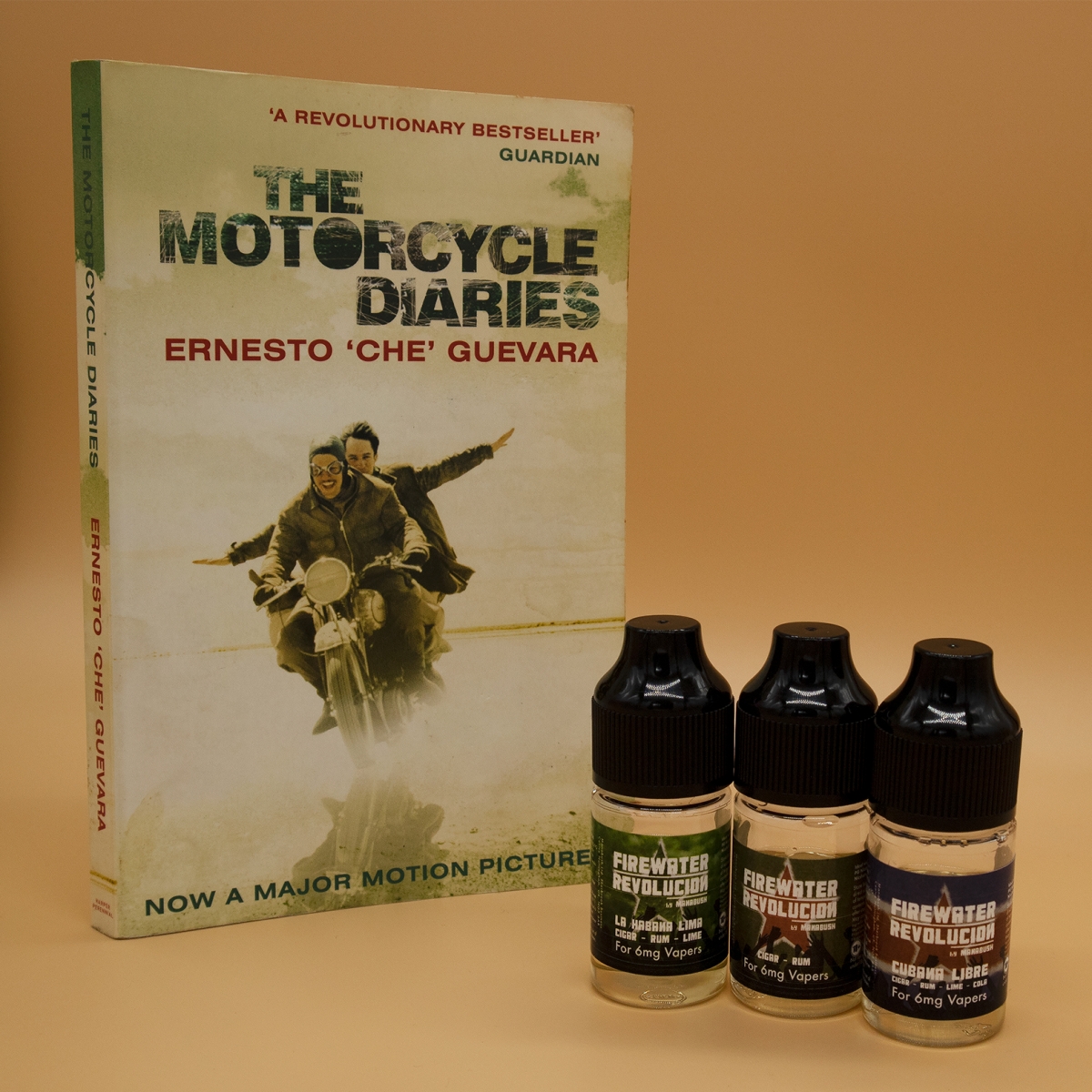