“Underage vaping spikes in the north of England”, says The Bureau of Investigative Journalism’s Matthew Chapman. It’s another in a recent series of negative articles that the TBIJ has produced ever since it obtained funding from billionaire Michael Bloomberg’s Vital Strategies organisation. Balance is given short shrift as the Bureau plugs Bloomberg’s biased agenda.

“Our reporting on tobacco is part of our Global Health project, which has a number of funders. Smoke Screen is funded by Vital Strategies. None of our funders have any influence over the Bureau’s editorial decisions or output,” says The Bureau of Investigative Journalism (TBIJ).

TBIJ published nothing of note about vaping prior to receiving funding from Vital Strategies and have now uploaded five negative pieces in the space of a month, nine in total. Even the most casual observer can see the “influence over the Bureau’s editorial decisions or output.” [link]

Vital Strategies laid out its stall when President and Chief Executive Officer Jose Luis Castro placed his lips to Michael Bloomberg’s buttocks and wrote: “Kid-friendly flavoured e-cigarettes have supercharged an epidemic of youth nicotine addiction. We applaud Michael Bloomberg for investing in this new initiative to end the youth e-cigarette epidemic. Mr. Bloomberg has long expressed serious concerns about e-cigarettes and their impact on youth – concerns that we have shared. These concerns have proved to be justified.”

Demonstrating an inability to write or get his work proofread, Castro added: “over a single year (2017-2018), youth e-cigarette rose 78%.”

None of that is true; there is no teen epidemic, teens are not attracted to vaping primarily through flavour – and Bloomberg really couldn’t care about vaping as it’s just a political vehicle.

Vital Strategies even admits to using Bloomberg’s money to pursue the billionaire’s agenda and attempt to influence: “Vital Strategies works globally and in more than 40 countries to support the adoption of proven policies to reduce tobacco use. Our global team of experts use policy, advocacy and strategic communication to help governments adopt life-saving, public health ‘best buys’ like comprehensive smoke-free laws and high tobacco taxes.” [link] 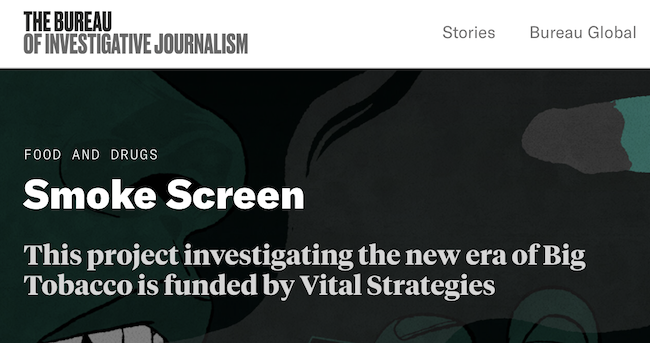 The Bloomberg news organisation is always at pains to point out its independence from the billionaire, like The Bureau of Investigative Journalism does with Vital Strategies, and yet “the editor-in-chief of Bloomberg News sent a memo to the company’s 2,700 journalists telling them they were not to do any investigative stories on Bloomberg’s campaign,” according to The Guardian. [link]

It seems declarations of neutrality don’t count for an awful lot in Bloomberg’s circles.

“More than a fifth of 15-year-olds in Yorkshire and the Humber vape,” says Chapman. “The data – based on a survey of 13,000 children produced after inquiries by The Bureau – found that teenagers in Yorkshire were more than three times as likely to vape regularly as those in London.”

Of course, this is easy to check as TBIJ has provided a link to the data set it used and taken the reader through the analysis…oh wait, it didn’t.

Instead, Chapman writes about “hotspots”, “significant rates”, and “fears”. He cites Dr Jennifer Quint unscientifically saying: “I suspect there are a lot of places that are just as bad”.

Having selectively targeted vaping, Chapman and TBIJ have failed to take into account that this deprived region is experiencing a much larger problem. Yorkshire Live notes: “Why are more of our teens smoking, drinking and taking drugs?”

Risk-taking behaviour has boomed in this region: “While under-age drinking and smoking and the use of drugs is falling dramatically across England, they have all risen in Yorkshire, official figures confirm.” [link]

TBIJ’s simplistic approach ignores Calderdale’s commentary: “Problematic substance use among children and young people is associated with abuse and neglect, truanting from school, offending, early sexual activity, antisocial behaviour; and being exposed to parental substance misuse. The more risk factors young people have, the more likely they are to misuse substances.” [link]

The laughable attempt at balance is restricted to nine words attributed to Professor John Britton and one quote from Public Health England’s Martin Dockrell. There is not a single mention of the comprehensive research conducted by ASH UK in conjunction with Cancer Research UK [link].

“In conclusion, data from the 2019 ASH YouGov Smokefree youth GB survey suggest that while some young people, particularly those who have tried smoking, experiment with e-cigarettes, regular use remains low.”

At a time when confidence in journalists is plummeting to a record low [link], The Bureau of Investigative Journalism are on a UK-based, Bloomberg-funded mission to throw as much mud at vaping and tobacco harm reduction as possible. This latest article is neither balanced nor fair. POTV is not linking to articles carried by The Bureau of Investigative Journalism until it improves the standard of reporting. 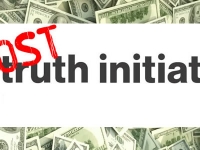