Dr Andrew Pipe, the organiser of the “12th annual Ottawa Conference on state-of-the-art clinical approaches to smoking cessation”, appears to think he is at war with vapers. He describes their attempt at communicating with conference attendees as an act of “infiltration”.

Dr Pipe claims to be “Canada's foremost expert on smoking cessation” and was “instrumental in the development of the widely adopted Ottawa Model for Smoking Cessation at the Heart Institute”.

Pipe is certainly one for drama and hyperbole. Last year he cried: “We’re seeing a public health disaster unfold in front of our eyes. And quite frankly Health Canada has been asleep at the switch. I talk to my colleagues across the country they’re telling me about entire teenage hockey teams vaping between periods in the dressing rooms. These devices are the most sophisticated and concentrated form of nicotine on the market so within 48 to 72-hours teenagers become addicted. And thereafter, their brain is hard-wired to crave nicotine in a variety of forms throughout the course of their days. So, we’re spawning a whole new generation of smokers which is sadly ironic.”

A cursory look at Canadian vape stores reveals juice being sold with low levels of nicotine, nothing like the higher levels found in the United States [link and link]. What could be motivating the doctor to rely on anecdote and hysteria? In an interview for CBC Radio, he puritanically opined: “Every time you inhale something that isn’t air it’s an insult to your lungs” [link].

That he claims to have never heard of Rights4Vapers, the group that booked a room in the conference centre, speaks volumes about his preparedness to engage in reasoned debate. 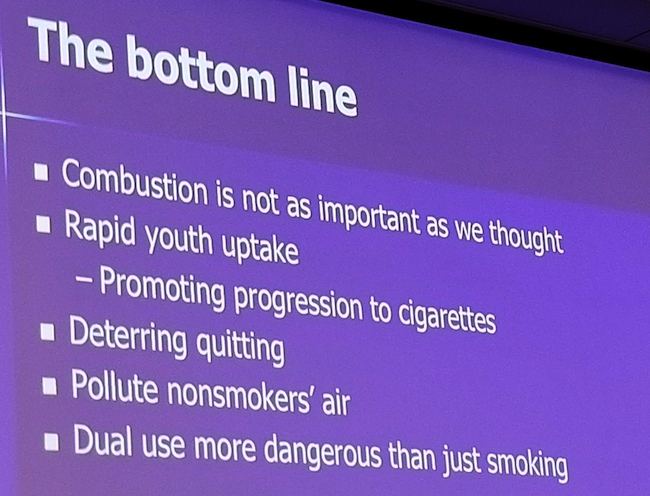 The conference featured Stanton Glantz as the keynote speaker, a man with a tenuous grasp on truth and reality. During his speech, Glantz claimed that when it comes to harm, “combustion is a lot less important than we thought it was.” It is difficult to frame this statement as anything other than absurd and extreme stupidity.

Glantz made the fatuous claim that eighty children take up vaping and proceed to smoking for every smoker who switches to electronic cigarettes.

“The Conference’s position on vaping may be related to the threat that it poses to the nicotine replacement market, which is dominated by the Event’s main sponsor Johnson and Johnson, also the producers of Nicorette,” said Sherwin Edwards, advisor to Rights 4 Vapers. “Several of the conference speakers have also listed affiliations with Pfizer, the manufacturers of Nicotrol.”

Rights4Vapers said they organised a simultaneous press conference in order to share genuine evidence on vaping and have their voices heard.

Dr Mark Tyndall called Glantz an extremist and said: “Despite what Dr Glantz has shared, there is no proof that vaping leads to heart attacks, cancer or respiratory diseases. Vaping is tobacco harm reduction. If all smokers switched to vaping, we would have a massive impact on one of the most pressing public health challenges of our time.”

If Dr Andrew Pipe genuinely believes in harm reduction, maybe he should distance himself from Glantz and Johnson & Johnson to engage in productive discussions with Rights4Vapers. If he treated them as partners in combatting tobacco-related disease rather than ‘the enemy’ he might be surprised at what he could achieve. Going by his recent tweet likening vaping advocates to pigs, this is unlikely to happen any time soon.

Stormtrooper by Andrew Martin from Pixabay