Individual states and weak-minded politicians have been lining up in the USA to try to benefit politically or financially from the recent outbreak of THC-related deaths. Rushing to push ‘executive orders’, bypassing the legislative process, to prohibit the sale of vape products caused uproar and disbelief. The legal challenges to these undemocratic moves is meeting with success.

Governor Kate Brown thought she could impose an evidence-free block on the sale of flavoured eliquids in Oregon. “My first priority is to safeguard the health of all Oregonians,” she said when announcing her proposal that ignored the health of current smokers who would be dissuaded from quitting or vapers who faced returning to cigarettes.

On Thursday, Brown received a big custard pie to the face in the form of a court-directed temporary stay. The court recognised that businesses would be forced to close “within weeks” if the ban had been allowed to go ahead before other court cases reached a decision.

Brown’s press secretary continued in a state of denial: “The court’s decision to enter a temporary stay today is unfortunate due to the ongoing public health threat posed by vaping-related illness”. Some would say the most unfortunate aspect is Oregon’s inability to see facts from fiction. 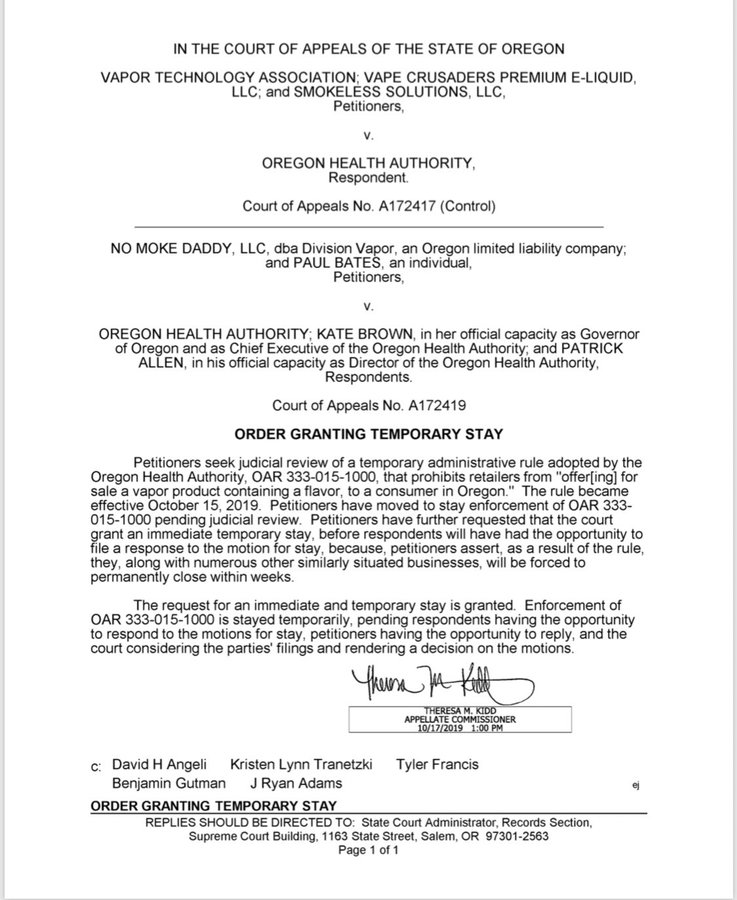 The Superior Court heard from genuine experts like Michael Siegel, who explained there was “no rational basis” for implementing a block on sales. He explained how all of the cases were linked to illegal black market THC liquids, and that the proposed ban would simply send vapers to black market dealers.

Dr. Michael Siegel, a professor at Boston University's School of Public Health, was interviewed about the outbreaks on WBUR's Morning Edition.

“I think that this is a very important principle in public health: when there is reasonable evidence that something is causing a disease, we take action at that point. And I think that right now,” said Siegel, “we have not only reasonable but very strong evidence that black market vaping products are responsible for this. And to try to lump nicotine products that are being sold by stores into that mix is very deceptive. And it really, I think, undermines the important message that the public needs to be getting, which is to avoid black market products, especially [those with] THC.”

He pointed out the simple fact that destroys the arguments in favour of a ban: “When you have a regulated market, you know what's in the products. You can control what the ingredients are. You can require the retailers to disclose the ingredients. When you have a black market, there is literally no way to regulate it. We saw this with alcohol prohibition. You know, when alcohol was prohibited, people started creating moonshine and that ended up being toxic. And so, I think if we just ban these products, we're going to have an even bigger black market.”

“But the second reason is it's going to have negative repercussions for people who rely on these products, especially adults who have used these products to quit smoking. If we ban these electronic cigarettes, most of these ex-smokers are going to go back to smoking, and that is a public health disaster.”

Charlie Baker’s administration has been ordered to drop the ban or implement it using established procedures because, “Governor Charlie Baker overstepped constitutional bounds”.

The judge decreed: “Input from affected industries and members of the public is a potent safeguard against executive abuse of discretion. If the executive branch avoids... input and safeguards, it unwittingly creates an echo chamber in which government officials’ own viewpoints reinforce each other, potentially causing unnecessary harm and ill-informed decisions.”

A lawsuit has been brought by three Montana vape shops and an industry group to block Governor Steve Bullock’s barmy ban. Freedom Vapes’ Ron Marshall is no stranger to winning in court when it comes to blocking prohibitionist measures and it looks as though he will be successful once again.

Governor Gretchen Whitmer was another who chose to ignore the logical arguments against a ban, and the evidence proving such measures were misdirected, and imposed an executive order because of “a public health emergency”.

A Michigan judge has poured cold water on Whitmer’s hot-headed plans, saying: “there was likely no basis for the governor to use her emergency powers.”

The decision gives space for vape shop owners to push forward with other lawsuits to prevent the loss of jobs and force vapers back to tobacco.

Unsurprisingly, Whitmer was not impressed: “This decision is wrong. It misreads the law and sets a dangerous precedent of a court second-guessing the expert judgment of public health officials dealing with a crisis.”

Relying on “the expert judgment of public health officials” who have thus far conflated vaping with the use of illegal THC-oils, and have ignored evidence in favour of vaping, is weak-minded at best.

"Our kids deserve leaders who will fight to protect them,” added Whitmer, while pushing smokers and vapers under the bus. Maybe kids and their families actually deserve politicians who are prepared to be honest and understand the research.

The court noted that “906 Vapor” wouldn’t be able to reopen at the end of the emergency order and that “A Clean Cigarette” had been forced to close a store – and was holding more than $2 million of unsellable products.

It agreed with the claim that the industry was facing “irreparable harm” as a result of Whitmer’s whim.

MI Rights Coalition spokeswoman Andrea Bitely welcomed the ruling and said: "We are ready to work through the normal legislative process to arrive at a balanced solution that protects the rights of adults to use vaping products as an alternative to combustible cigarettes, and at the same time, get these products out of the children’s hands.” 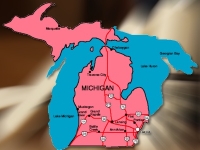 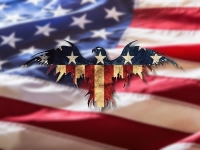