The TRT World news channel is based in Istanbul, providing content with an exclusively Turkish perspective on global matters. Roundtable is made in its London broadcast centre.

Responding to the newspaper headline coverage, Sarah Jakes opined that she felt it was the product of a perfect storm. “In America they report an increase of experimentation among youth, and then on top of that they had quite a large number of lung injuries which have subsequently found to be mainly due to illicit THC cartridges, being sold basically on the black market by drug dealers, cutting them with something called Vitamin E Acetate, which is making people ill,” explain Jakes.

“But what that’s done now is opened the door for everybody who was anti-vaping or had prohibitionist tendencies (which were always there underlying the argument anyway) to come forward to what we’re seeing now is bans and flavour restrictions.”

Robert West was asked if what Sarah said was true and that vaping is otherwise safe. He responded: “Well, I don’t think anybody is claiming vaping is safe; if you inhale anything into the lungs that isn’t fresh air then obviously there’s going to be risks associated with it.”

“I think the best way of putting it, is that whatever harms there might be from vaping e-cigarettes, regulated products in the European Union, then it’s going to be nothing like as harmful as smoking. I think even the people who are really pro-vaping would say ‘look, it’s not about people who have never smoked suddenly taking up vaping as a sort of recreational practice, but rather smokers, who are doing something incredibly dangerous, switching to something that’s a lot less dangerous’ – and that remains true, even now with all of these stories.”

David Foster asked what proof is available that vaping is substantially better than smoking.

Robert West responded: “If you look at the chemicals that are in tar and cigarette smoke, you’ve got hundreds and hundreds of them, and many of them are known to be really carcinogenic, and there’s various other toxins that are in the cigarette smoke. In the vapour you get from regulated e-cigarette products then you’ve got almost none of those – and the concentrations of the known toxins are much, much less.”

Deborah Arnott expressed her fear that the media coverage could be driving smokers away from making quit/switch attempts: “They think it’s associated by vaping and I don’t think anyone is suggesting it’s definitely not…but put that in context, 1300 people a day die from smoking in America – and that’s the real public health epidemic, and no one is talking about that. That’s what worries me, it’s out of proportion.”

Dr Gan Quan spoke about youths “smoking” e-cigarettes and said this was the reason there was concern about vaping in America. Arnott interjected to point out that people don’t smoke, they vape, and that America’s biggest problem was that it still doesn’t have a proper regulatory process.

The full show can be seen on David Newell’s YouTube video channel. 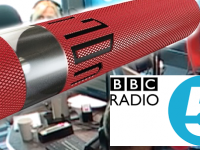