Governor Andrew Cuomo proposed an executive order to ban flavoured juices, claiming it was a proportionate response to the rash of reported lung disease incidents. The health council met yesterday and feigned listening as people spoke out against the emergency legislation. New York is now the second state in the USA to have banned flavoured eliquids, following on the heels of Michigan.

Andrew Cuomo said: “It is undeniable that vaping companies are deliberately using flavours like bubblegum, Captain Crunch and cotton candy to get young people hooked on e-cigarettes -- it's a public health crisis and it ends today.”

Of course, it is totally deniable.

Vape companies do not target children, but some say that there are companies who have exacerbated this situation through the irresponsible use of cartoon images and infantile brand names.

Protests were conducted outside the meeting, while advocates and business owners took turns to argue why a flavour ban would be detrimental to the public health and for the businesses that employ people and pay taxes.

Advocate Matthew Elliot said: “I would like to talk about the hypocrisy that has been spoken here today; not only from false numbers that I’ve been hearing from anti-tobacco zealots, including those of Campaign for Tobacco-free Kids who get funding through the MSA payment.”

“This is supposed to be about public health – it’s about blood money!”

“Let’s be real here. I want to read a quote, ‘The state must declare that the child is to be the most precious treasure of the people as long as the government is perceived to be working for the benefit of the children. The people will happily endure almost any curtailment of liberty and deprivation’. That is what is going on here today, you are using children as shields for blood money. That was from Hitler!”

“That is what is happening to New York. We are a state of proud, we are a state of many, coming together, of all races, of all ethnicities, and this is about blood money – this is not about public health. Andrew Cuomo is fast tracking this to get vapour products out of New York state, and I’m sick of it!”

“We will not let this happen: We vape! We vote! Flavours save lives!” 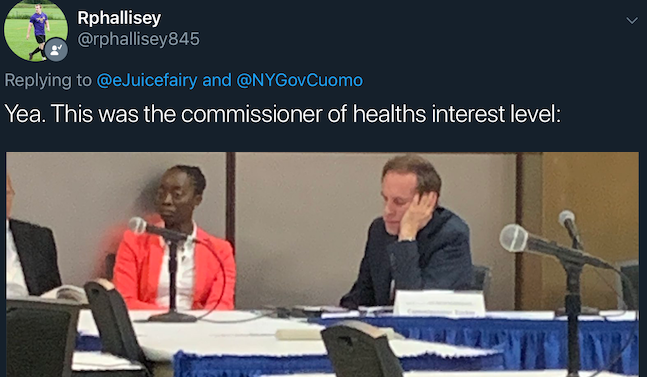 @BRAVEmediaMO wrote on Twitter: “Commissioner Kraut doesn’t like committee members asking follow up questions to vapers. Tells member: we’ve got more ‘association members’ (referencing special interest health charities) to get to, direct your questions to them. The system is rigged!”

Members of the health council demonstrated how much they cared by spending their time playing games and texting on their electronic devices. They voted in favour of the ban. Shops in New York now have two weeks in which to get rid of all eliquid stock that isn’t menthol or tobacco flavoured.

Tedros Adhanom Ghebreyesus, Director-General of the World Health Organisation, said: “I welcome this emergency executive action by New York Governor Cuomo to ban the sale of flavoured electronic e-cigarettes in New York State. This is a great example of how quickly decisions can be taken on local level to improve health.” 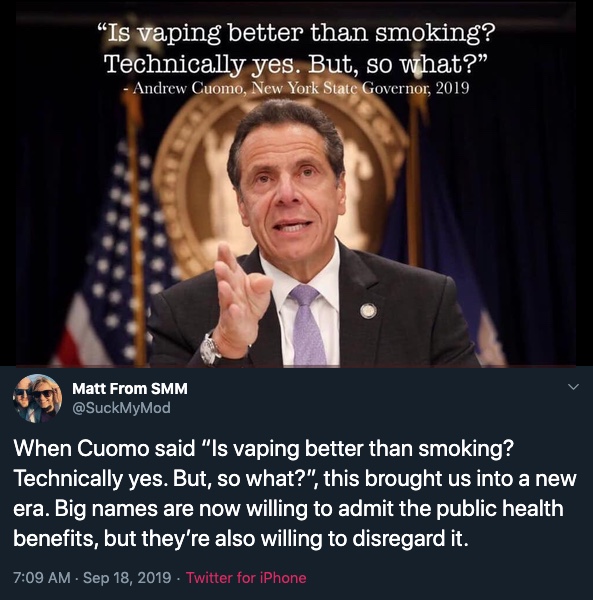 This insanity was countered on the UK-side of the Atlantic with a statement from Public Health England (PHE). PHE reminded everybody that vaping is safer than tobacco and more effective in helping people quit than willpower alone. It said: "Our advice on e-cigarettes remains unchanged - vaping isn't completely risk-free but is far less harmful than smoking tobacco. There is no situation where it would be better for your health to continue smoking rather than switching completely to vaping.”

"All UK e-cigarette products are tightly regulated for quality and safety by the MHRA. It's important to use UK-regulated e-liquids and never risk vaping home-made or illicit e-liquids or adding substances, any of which could be harmful.”

"Smoking kills thousands every year and creating a smoke-free generation is one of our top priorities. Vaping is a fraction of the risk of smoking and makes it much more likely you'll quit successfully than relying on willpower alone. The sooner you stop smoking completely the better."

Martin Dockrell, PHE’s head of Tobacco Control, said: "Unlike the US, all e-cigarette products in the UK are tightly regulated for quality and safety by the Medicines and Healthcare Products Regulatory Agency and they operate the yellow card scheme, encouraging vapers to report any bad experiences."