NNA: Nothing To See Here

The New Nicotine Alliance UK (NNA) has released a statement aimed at wavering vapers, smokers, and their loved ones regarding the panic coming from across the Atlantic. Many of our news outlets are spreading false propaganda – but the NNA says it’s OK to carry on vaping as there’s “nothing to see here”.

Martin Cullip, chair of the NNA, writes: “You may have read some pretty scary articles in recent weeks about how ‘vaping’ is causing health problems – including deaths – in the USA. We use inverted commas around the word vaping because it is by far the real story.”

“We have received concerned messages from supporters about this and have had reports of vapers being contacted by friends and family members saying they should immediately quit using e-cigarettes. Many of you reading this will have experienced the same first-hand or on social media.”

“We will not be going into detail about why these articles are irresponsible, ill-informed and wrong because others have already done so. We provide links to numerous comprehensive rebuttals below for you to send to those who have been sucked in by the negative coverage recently.”

“Suffice to say that vaping nicotine is not to blame for any of these episodes, but instead illegal oil-based THC liquids bought from unregulated vendors in America, not the UK. In short, drug dealers.”

The advice from Public Health England – and from the NNA – remains the same.

“We do however condemn the many bad actors who are fanning the flames of this false panic. Whether it is journalists chasing click-bait or ideologically driven harm reduction sceptics in the UK health community, they are actively deterring many thousands of smokers from either opting to switch to a far safer form of nicotine consumption or guiding those who may be using e-cigarettes to move back to smoking, based on no proper evidence whatsoever.”

“This is not a game. Their crass conflation of vaping with illicit, unregulated and deadly illegal drug-containing liquids will cost lives and they should be thoroughly ashamed of themselves.”

“The e-cigarette market in the UK is tightly regulated under the Tobacco and Related Products Regulations Act 2016 so you, your friends and family should have nothing to worry about. Keep calm, educate them, and carry on vaping.” 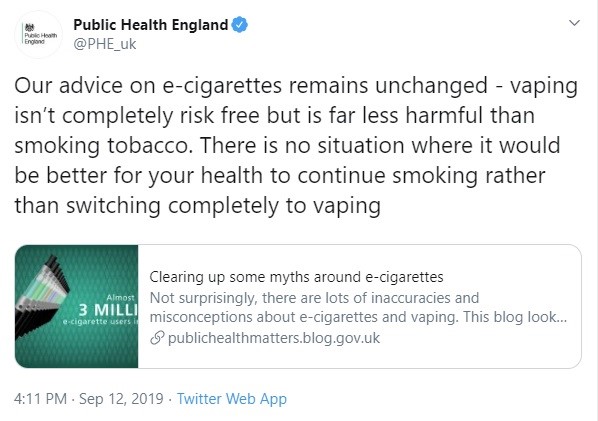 “To stay safe, the simple approach is to only buy from reputable vendors who sell products regulated by the Medicines and Healthcare products Regulatory Agency in the UK. Don’t buy from boot sales, men in vans or people in the pub.”

“It is regrettable that there is so much unjustified negativity being promoted about devices that have driven down smoking rates considerably since 2012 and are making dramatic improvements to the lives of millions. Sadly, it seems that malign influences are at work.”

“The bottom line, though – and a line endorsed by government institutions - is that there is nothing to see here if you buy from legitimate sources. Ignore the panic-mongers and spread the word.”

The NNA is an independent charity that is funded wholly by individuals; it does not accept money from the vaping or tobacco industry. It campaigns on behalf of nicotine users for the sensible treatment of alternative, lower-risk nicotine products. It is staffed by volunteers who speak to leading experts, researchers, public health bodies and politicians to promote a better understanding of the issues and influence sensible policies and legislation. You can support the NNA’s work by becoming a member for free or making a donation. 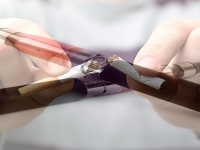