The Michael Russell Oration is an established annual event, delivered to honour the work and memory of Professor Michael Russell, a pioneer in the study of smoking behaviour, clinical interventions and public policy action. Ronald W. Dworkin, M.D., Ph.D. delivered this year’s oration at the Global Forum for Nicotine (GFN), in Poland, on the subject of “Interests and Ideology in Harm Reduction”.

GFN organisers describe Michael Russell as the person who did most to lay the foundations for tobacco harm reduction and welcomed Dr. Dworkin to Warsaw; a practising anaesthesiologist, with a doctorate in political philosophy and a lecturer on the George Washington University Honours Program.

Dr. Dworkin holds an interest in synthesizing the worlds of science, medicine, and political philosophy. He recently wrote a piece for The American Interest titled “The arrogance of public health advocacy”. In it, he wrote: “Public health activists are clever enough to understand the scientific method, but they are not clever enough to understand its limits. Their minds are crowded curiosity shops where science, ideology, and hubris all find a place.” 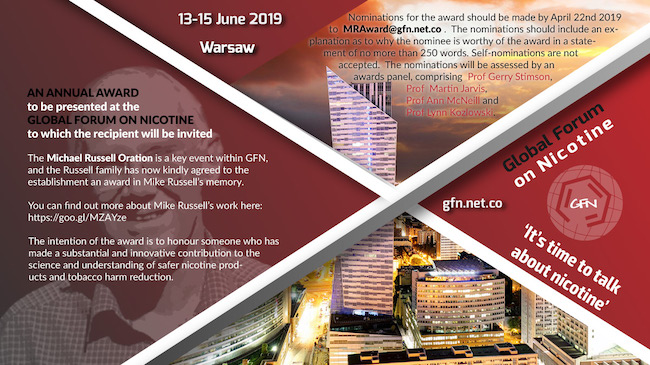 He began: ““I have come into your lives this evening like a comet out of nowhere. I’ve not spoken before about harm reduction, nor is my area of research in nicotine, I’m here because of the essay I wrote for the American Interest – an opinion magazine on public health and vaping.

The essay was a mild defence of vaping but a pointed criticism of toady’s public health establishment – at least in the United States – and because of that essay I find myself here.”

“I’d like to begin with a story from my own anaesthesia practice. Several years ago, I sedated a very obese man for surgery. Another anaesthesiologist came into the room, made jokes about the man and laughed out loud. When I told the man he was only half asleep he grew worried, he worried the man may sue him if he remembered the insult after waking up.”

“So, he asked me to give the man a drug called Versed which causes amnesia. When I reminded him that it causes people to forget things going forward, but not things already said, my colleague bowed his head and left the room thinking he’d already lost half of his fortune in court. Fortunately, the man did not remember anything upon waking up and my colleague was safe.”

“I tell this story,” Dr. Dworkin continued, “to identify a trend in anaesthesiology since its beginnings in the 19th Century. Over the years my specialty has divided the targets of anaesthesia into pain, awareness, amnesia and consciousness. In the past, anaesthetic acids such as ether hit almost all of these components, almost by scattershot. But over time drugs came onto the market to target select feelings and experiences; with a drug like Versed, for example, targeting memory.”

“This is just a microcosm of what happened to larger society over the last two centuries. In the past, when people wanted to numb themselves to life’s problems, they used alcohol – analogous of the way anaesthesiologists use ether. But over time, drug companies eyed the very unpleasant feelings in life that prodded people to drink and divided them into categories. For example: into anxiety, depression, insomnia, and pain. And then, as an anaesthesiology, targeted them with specific agents. Those agents were then subdivided and made more precise.”

“So, for example, the drug Versed, which I use in the operating room, is one of sixty drugs that make up the class of Valium-like drugs called benzodiazepines, which are used to treat insomnia and anxiety. When treating insomnia, each benzodiazepine has its own special trick – one form gets people off to sleep immediately, another form kicks in after four hours.”

“An analogous trend occurred in the tobacco world. Centuries ago, when one wanted lift in benzodiazepines mood, one would smoke tobacco or drink coffee. As in the case of ether and alcohol, nothing else is available. But over time, entrepreneurs discovered ways to target the sensations more precisely…and with fewer side effects.”

“Whenever a new product comes to market it makes already established companies nervous. In the case of e-cigarettes: tobacco companies and the drug companies that manufacture tobacco substitutes benzodiazepines fear they will lose market share.”

“At first, they campaigned against the new product. This is how interest groups usually operate; they defend their turf, they dislike change, they expand incrementally, and they operate for the direct benefit of their members.”

“Many public health experts also fought against e-cigarettes; they still do. But, unlike the tobacco or drug companies, they do not do so for profit, they are not worried about market share, they do so for reasons of ideology. They do so for the sake of a larger political vision.”

“What is ideology? It’s a belief system adopted by a large number of people, over a long period of time, one with an element of hope and aspiration in it. Its goal is to improve people’s quality of life somehow. A single catchword usually sums it up. The word brings to mind an entire world view when heard.”

“For example, the word ‘Diversity’. It’s been in the English language for centuries and, for all that time, it meant nothing more than its definition. Now when it’s uttered everyone knows what it means. It immediately conveys an entire world view about how society should be organised. Same with the word ‘Green’.”

“Ideology has cropped up in the world of mental health. For example, the word ‘Neurotransmitters’. It refers to all the little molecules that enable nerves to communicate with one another. But over the last 30 years, the word has achieved popular resonance. It means much more when spoken. When a lay person tries to explain his or her unhappiness, and invokes the word neurotransmitters to do so, the listener immediately knows what it means – a medical problem more than a life situational problem, and something best treated with drugs.”

“Something similar happened with the phrase ‘Public Health’.”

“The phrase has been around for centuries. Over the last few decades it no longer describes the field. The word ‘public’ has become synonymous with the word ‘community’, which has become a catchword in its own right; it reflects people’s fear of isolation and longing for a world where people come together…a feeling exasperated by their increased loneliness. In the US, skilled politicians’ sense to take advantage of this fear. So, they say, ‘we need to go back to community’, or, ‘let’s build more communities’.”

“For similar reasons, whenever pushing a healthcare plan, American politicians will support ‘Public Health’ in their plan, because they know that the word ‘public’ is linked in voters’ minds with the utopian ideal of community. When voters say, ‘I really believe in public health’, what they are saying is that they dislike the medical industrial complex …(doctors and drugs companies making money for themselves rather than putting people first)… This is why ‘public health appears in so many documents and why many departments of public health have some departments of community health.”

“A whole host of other derivative ideas now arise whenever the phrase ‘Public Health’ is uttered. Mental health has become a big part of Public Health, causing Public Health to absorb the ideology signified by ‘Neurotransmitters’. Other words such as ‘Wellness’, ‘Lifestyle’, and ‘Prevention’.”

“Public Health is no longer a medical field, it has managed to tap into people’s consciousness about what it means to lead a good life on many levels. Public Health, and the words associated with it, represent a far more complex outlook – one that appeals to people’s interests, but also to their anxieties about the world around them and their place in it.”