Dame Sally Davies, the current chief medical officer for England, has indulged herself in fantastical alarmist hysteria about the dangers of vaping. Although she has decided to quit her post in September, her unscientific comments about electronic cigarettes (telling MPs to ban it in public) make her totally unfit for the position anyway. Davies will be replaced by Professor Chris Whitty.

Davies appeared before the House of Commons Science and Technology Committee to discuss the roll-out of the 5G mobile phone network. While there, she also vented about vaping.

“What has become abundantly clear to me,” she began, “over the nine years that I have been Chief Medical Officer is that we are very good—well, pretty good—at the illness bit, but we have been very poor in the long term at the preventive, health promotion bit. We are only going to get that if we make some structural changes to society, but we also have to actually focus on it.”

Davies believes that if the government followed her puritanical prohibitionist agenda, “we would save an extra 10,000 lives over five years.”

This doesn’t just reflect her views on e-cigs, it includes sugar bans, salt restrictions and, “do crisp packets all have to look different, or could they be standardised? Could cereals be standardised?” 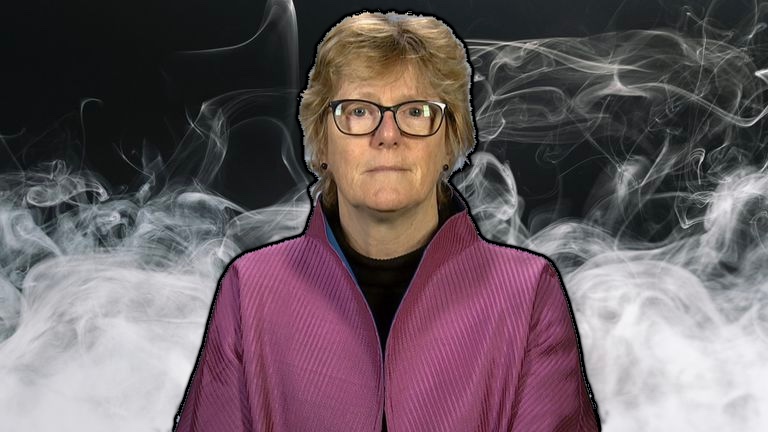 Norman Lamb MP chairs the Science and Technology Committee. He speaks a lot of sense when it comes to vaping and tobacco harm reduction. He said: “We recently did a report on e-cigarettes. I think the conclusions were that e-cigarettes potentially offered a useful aid to smoking cessation, but I think you take a slightly different view, or you have concerns about them.”

Davies’ response balanced concessions with ignorance: “I share your view that e-cigarettes are clearly much safer than tobacco smoking, and they have become a much-liked way of stopping smoking. I am quite relaxed about that. If they help people to stop, they are so much safer so I would like them to use them. I would encourage the NHS smoking cessation services to work with that. There are a few trials that support them as a way of stopping smoking.”

“But there is a world of difference on: are they safer? Yes. Are they good for smoking cessation? Probably, but that is a personal issue—what works for the individual. And how should we treat them as a general usage issue? Although they are much safer than smoking, I have concerns because we do not know their long-term side effects. Therefore, not only do I reserve my position on this, but I would like us to be careful. It took us 50 years, as I said earlier, to discover the harm of tobacco.”

If Davies applied some logic, she could estimate the long term harm based upon the current estimated level of danger.

“Being much safer does not mean it is safe.”

Nothing is safe, Dame Sally. Some will remember she is a close friend of Martin McKee, these words of idiocy sound as though they came directly from one of his laughable articles.

“There is some early evidence from cell culture—it is probably from glycerol or formaldehyde—that they can change cellular behaviour. Inhaling that into your lungs, if you are susceptible, may lead to long-term problems. I am quite concerned about the flavourings, because while they may be safe when eaten, what happens when you inhale them? The story which underlines this is about butterscotch—which I happen to like. Apparently, they made butterscotch for vaping and then discovered that it gave people fibrotic lungs. It is well known to respiratory physicians that if you inhale butterscotch, you can get butterscotch worker’s lungs.”

Butterscotch worker’s lungs? Is this an ailment contract by butterscotch miners extracting the world’s finest butterscotch from deep below the earth’s crust?

“What else will happen? We don’t know. My personal view is that we should treat them as we treat tobacco products, as well as having them there for cessation. I would not have them smoked in public places. I hate it when I walk past someone and they waft vapour over me. We are talking about pollution and we want people to live in clean air, so why do we let them smoke in public places and waft it all over us? It is much safer for them, it is true, but I don’t want to inhale it.”

Classifying vaping as a tobacco product? Something containing absolutely no tobacco, and all because she hates seeing clouds.

“I would treat it the same as tobacco. I know we are very careful with strength, volume and where they can advertise, but I find it offensive to see big hoardings advertising them, and showing them as cool and a new lifestyle. I worry that the big four tobacco companies have bought up a number of them, including Juul. Why would they do that? They must be going to proselytise and push them.”

Banning informative adverts that promote awareness and understanding because Davies finds them offensive.

“I think if you put all that together—of course we want them available for people to stop smoking, and I don’t mind if in the privacy of their own houses or gardens they continue—I just don’t want us to set an example to children of them being smoked or used publicly. I don’t want that pollution and I don’t want it put over as a cool lifestyle, because it’s an addictive product. Why introduce and have openly available a new addictive product? We’ve got enough.”

We’ve got enough? Well, we certainly have one more chief medical officer than we need at the moment.

Professor Whitty will replace Davies in September. He is currently Chief Scientific Adviser for the Department of Health and Social Care and leads the National Institute for Health Research. Time will tell if he offers more sense on tobacco harm reduction than Professor Dame Sally Davies.