Professor Kefah Mokbel has written a letter to Health Secretary Matt Hancock and Education Secretary Damian Hinds warning them that vaping “could” lead to breast cancer in teenage girls. Coverage in The Daily Mail was called “evidence-free”, “baseless” and a “scare story”. Journalists added fake facts and mentions of “vibrant packaging” to the hit job for good measure.

Professor Kefah Mokbel plies his trade as a breast specialist at the private Princess Grace Hospital near Harley Street. He was named in Tatler magazine's Best Doctors Guide as one of the featured ‘Top Breast Surgeons’ in 2006, 2007 and 2013. In November 2010 he was named in the Times magazine's list of ‘Britain's Top Doctors’. He serves on the board of several scientific journals and has published two hundred papers.

He is clearly an intelligent and proficient clinician. What could drive him to attack tobacco harm reduction? A clue as to his position on vaping might come from the fact that the Hospital Corporation of America owns the Princess Grace Hospital. 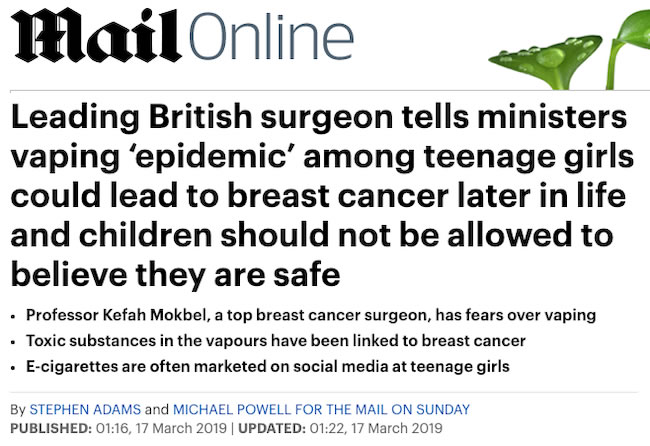 Mokbel misinterpreted Public Health England’s (PHE) advice that vaping is a safer and healthier method of using nicotine to claim that it is saying vaping is “by and large safe”. This is not the position of PHE or the government.

He raised unfounded fears about a teen epidemic, marketing to teens and a host of debunked objections regarding product safety.

Perverting the precautionary principle, his letter states: “It would be unforgivable if we were to do nothing, only to discover in 30 years’ time that widespread vaping among teenagers in the 2010s and 2020s had triggered a significant number of avoidable cases of breast cancer.”

“What too few people realise is that e-cigarette vapours not only contain addictive nicotine, they also contain numerous potentially toxic chemicals that may well increase lifetime risk of cancer.”

Laughably, Mokbel then dismissed the latest Cancer Research UK figures on teen vaping: “According to official studies, just one in 100 British teenagers is a regular vaper. But if you ask me, that number is simply out of date, or many of the young people surveyed were economical with the truth.”

The Mail actually got one thing correct in its piece: “No hard evidence currently exists linking e-cigarette use with breast cancer or any other type of cancer.” 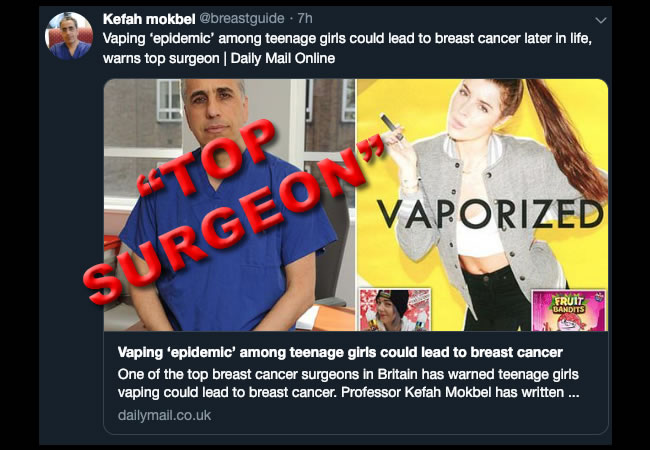 Hazel Cheeseman, ASH UK, is quoted as saying: “Current evidence does not support the alarm expressed in the letter. Regular use in teens remains low with no established link to increased rates of smoking or high risk of breast cancer, or any other type of cancer.”

John Dunne, UK Vaping Industry Association, accused the Daily Mail and Mokbel of “scaremongering”, warning that announcements like this discourage smokers from switching away from harmful cigarettes to vaping. He said the article was, “Yet another example of poor reporting. A baseless, unsubstantiated and reckless scare story.”

ATHRA wrote: “It is irresponsible to uncritically promote this evidence-free scaremongering from the Daily Mail. Uninformed opinion, speculation and exaggeration have no place in this debate.”

Dr Sharon Cox said: “Critics suggest we don’t have long term evidence to support e-cig use, but put out scare stories based on speculation of data. We all know what does cause cancer though, right? Smoking.”

You are allowed your own opinion, Professor Mokbel – you are not allowed to invent your own facts.