Dr Lynne Dawkins, the Centre for Addictive Behaviours Research, London South Bank University (LSBU) presented a myth-busting lecture on vaping that drew on the most recent evidence and updates since 2013. The lecture took place at the LSBU before Christmas but the video has recently gone online.

Lynne began proceedings by saying: “Public perceptions are still confused, there’s incredible naivety and ignorance about e-cigarettes. I thought it was about time,” having last given a lecture on the subject of research findings five years ago, “that I gave an evidence update on what we know now.” 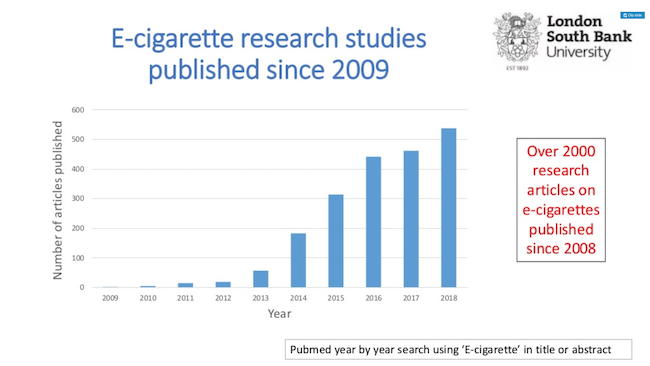 Along with Dr. Sharon Cox, Lynn made a list of common myths, concerns and misperceptions that they’d heard surrounding vaping. It covered:

To illustrate how much we now know about vaping, Lynne completed a search for published studies looking at vaping. From zero research conducted in 2008, there was a huge surge to over 500 studies in 2018 (and that doesn’t include searching for ENDS/Vape/etc).

Prior to 2016 vaping fell under general consumer product safety regulations before being covered by the Tobacco Products Directive. Lynne spoke about how products have to be licensed for sale in the consumer market, with minimum standards for safety, quality, packaging and marketing. She highlighted how current regulations may be acting to deter current smokers from switching. 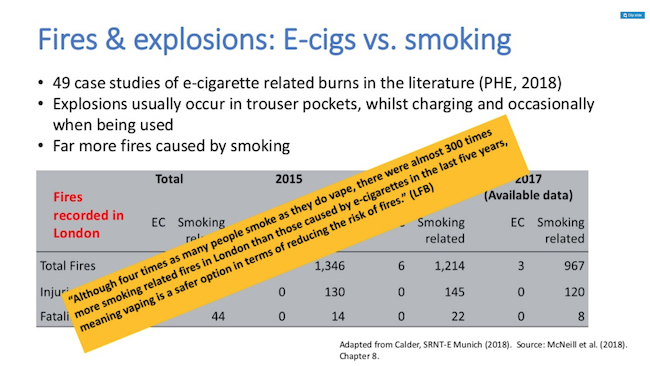 Action on Smoking and Health UK estimates that 3.2 million GB adults vape, which equates to just over 6% of the population; this is mainly done by current smokers (1.7 million) and ex-smokers (1.4 million). They believe that take up by non-smokers is limited to around just 0.5% of the general population. The reasons given for using vape products was topped by ‘quitting smoking’.

People say that vaping is just swapping one addiction for another – but Lynne pointed out: “What’s wrong with nicotine? It’s the burning that is associated with smoking’s harm.” Tobacco harm reduction, switching to a cleaner form of nicotine such as vaping substantially reduces risk of smoking-related illness – “this is the basis for nicotine replacement products, patches and gum and so on, giving people the nicotine they need without the harmful effects of burning.”

The full presentation can be viewed on the video below: