Many vapers remain uneasy with the presence of the tobacco industry in the vape market, but British American Tobacco (BAT) remains committed to shifting its business into reduced harm products. Supporting this changing focus, BAT has released a report looking at its progress and ambitions for the future.

According to the press release, The 2018 Harm Reduction Focus Report “highlights BAT’s continued commitment to contributing to tobacco harm reduction. It demonstrates how the company has made tremendous progress in its long-held ambition to provide consumers with less risky tobacco and nicotine choices.” 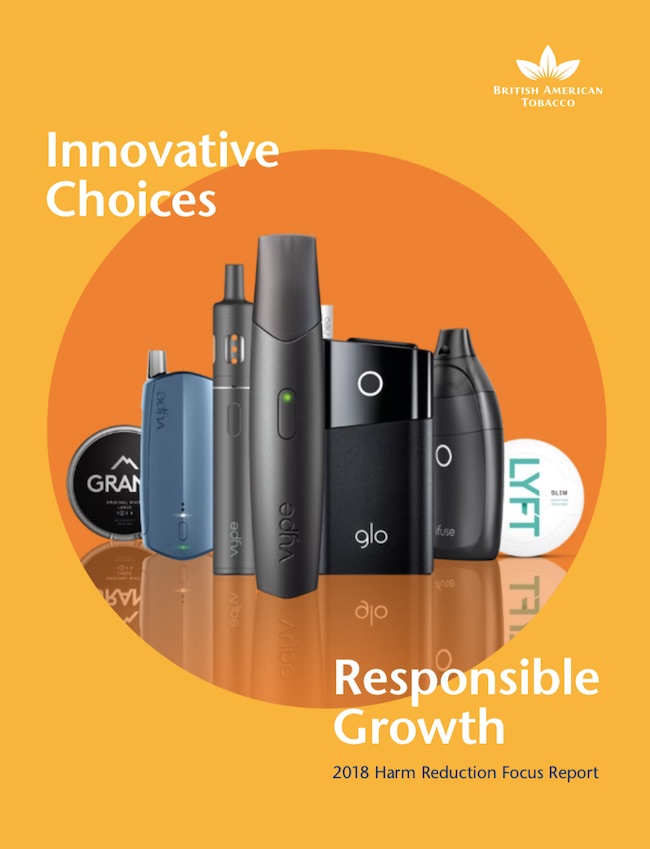 BAT claims the report highlights its contribution “to harm reduction by continuously investing in innovation,” and the building of “reliable evidence”. Historically, tobacco company research tends to be ignored or criticised by tobacco control – but, as we have seen over the last couple of years, the evidence being produced by the industry is immeasurably and consistently of a higher standard than the junk science coming from (mainly) American tobacco control-funded studies.

The report demonstrates that its studies lie in accordance with independent studies, and it states: “There is growing consensus among many public health bodies and academics that vapour products can have a significantly reduced risk profile compared to smoking. Public Health England in the UK estimates these products are ‘95% less harmful than smoking’. Other third-party science and research supporting the significantly reduced-risk potential of these continue to grow around the world.”

It cites Health Canada: “Vaping is less harmful than smoking. Completely replacing cigarettes with a vaping product will significantly reduce a smoker’s exposure to toxic and cancer-causing chemicals.”

And it goes on to reference The U.S. National Academies of Sciences, Engineering, and Medicine: “There is conclusive evidence that completely substituting e-cigarettes for ... cigarettes reduces users’ exposure to numerous toxicants and carcinogens present in cigarettes.”

Illustrating how the roles of tobacco companies and tobacco control have seemingly made a 180-degree switch, the report also highlights the facts that tobacco control refuse to acknowledge when it comes to snus: “There is substantial evidence that using snus exclusively has significantly reduced risk compared to smoking1, and experts often speak of the ’Swedish experience‘ in the context of successful harm reduction. In Sweden in the 1970s and 1980s, there was a gradual shift from cigarette smoking to snus use, particularly among Swedish men, with a reduction in smoking-related disease rates seen decades later.”

“Today, Sweden’s overall daily consumption of tobacco is close to the daily EU average, but it has by far the lowest rates of smoking in Europe. Sweden also has the lowest rates of tobacco-related diseases. Many authorities, including those outlined below, have cited the widespread availability of snus as a key factor in Sweden’s move away from cigarettes.”

Nicandro Durante, Chief Executive of British American Tobacco, commented: “At BAT, we’re committed to transforming tobacco by providing consumers with satisfying alternatives to smoking. Without the right products, tobacco harm reduction will never be a reality, which is why our approach is centred on developing an outstanding product portfolio.”

“But these products can only meet their potential if the right regulatory and market conditions are in place.  Stakeholders from across government, industry and public health need to continue to work together to create an environment for tobacco harm reduction to be successful.”

“As I come to the end of my eight-year tenure as CEO of this fantastic company I am immensely proud of the progress we have made with regards to harm reduction. But this is just the beginning of BAT’s mission to transform tobacco.”

Tobacco controllers will cite the tobacco industry’s history as justification for opposing the development of alternative nicotine products but, as can be seen from Durante’s comments, the interests of BAT lie in common with that of harm reduction advocates and vapers.