The anti-vape team from Buffalo’s Roswell Park Comprehensive Cancer Centre, favoured by the Food and Drug Administration when it comes to producing skewed studies, has produced a veiled hatchet job on another harm reduction product. 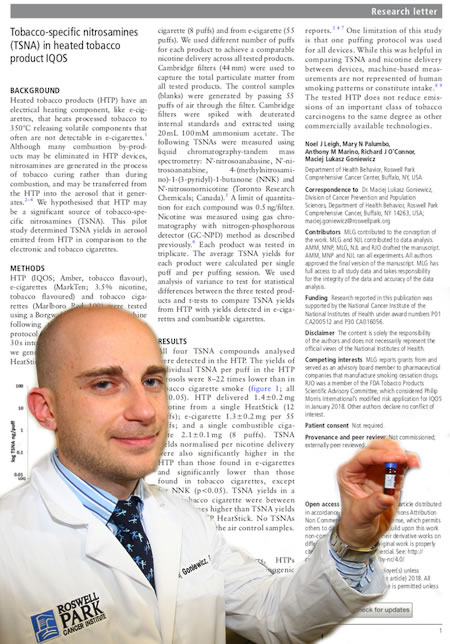 Although this Goniewicz study focuses on the heat-not-burn(HNB) IQOS, the data is misrepresented in order to elicit a response and support an ideological position that HNB products “emit substantial levels of carcinogenic” toxins.

Why this is important to vapers is that it clearly demonstrates a desire to obfuscate the truth in research – and this team are responsible for putting out a number of anti-vaping studies.

In their research letter titled ‘Tobacco-specific nitrosamines (TSNA) in heated tobacco product IQOS’, the team aimed to illustrate a comparison of the TSNAs produced by a MarkTen e-cigarette, an IQOS and in the smoke from a smoke from Marlboro Red.

They concluded: “Like combustible products, HTPs emit substantial levels of carcinogenic TSNA. Although HTP emits lower amounts of TSNA than combustible cigarettes, the amounts are significantly higher than from e-cigarettes.”

What is wrong with the graph?

Everybody unfamiliar with data analysis assumes graphs are like those we all remember from school. After drawing the X and Y axes (using a ruler and pencil please, class), a linear progression of numbers (1,2,3…5,10,15 etc.) were written going up the Y-axis. Then the rest of the class time was spent colouring in the bar chart.

A logarithmic scale is different in that the scale is not regular, each step is not one more or five more – it’s ten times more (in this case). What this means is that it cancels out large visual distances between the things being compared if one was a low value and the other a high one. 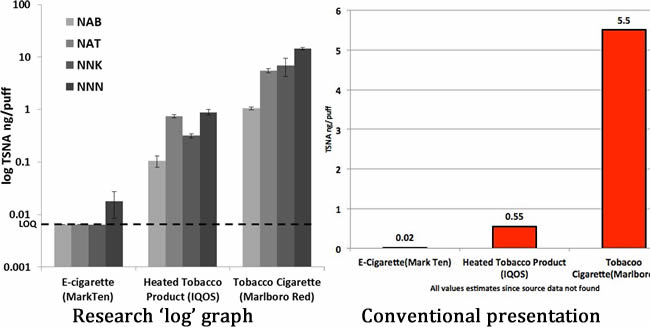 Misleading graphs may be created intentionally to hinder the proper interpretation of data. In this case (the black one on the left), it narrows the gap between the measurement of toxins released by the IQOS and cigarettes, making it appear as if HNB devices are almost as bad as smoking tobacco products.

Carl Phillips commented: “Gotta give credit to FDA's pet researchers in Buffalo. Putting the quantity of a (speculative) carcinogen on a log scale to hide how huge the differences are is a more sophisticated lie than most of FDA's minions are capable of.”

“Make no mistake: It is an obviously intentional attempt to mislead. There is no conceivable legitimate reason for reporting the quantity of a carcinogen in log terms. I cannot imagine any model of carcinogenicity that suggests this is a useful measure.”

The graph was reworked by @Jake2001 on Twitter (the red one on the right) and debunks the conclusion the research team would like people to believe from looking at their chart.