The End Of Smoking in England

Research funded by Philip Morris Limited predicts that England won’t become fag-free until after 2050, pointing out that some regions will reach that point sooner than others. Is the company concerned about getting people off cigarettes or simply using this as a vehicle to promote Heat-Not-Burn (HNB) over vaping?

The price for Philip Morris’ profits is being paid daily. The South Shields Gazette highlights, “The cost of people smoking in South Tyneside costs the borough more than £34million a year, through NHS costs, sick days and even smoking breaks.”

A study by ASH UK has concluded that smoking costs South Tyneside £20million in smoking-related sick days alone as, using figures from the National Institute for Health and Care Excellence, “smokers suffer on average 2.74 additional sick days a year compared with non-smokers.”

Although half of cigarette packet sales goes to the government, British Heart Foundation’s Simon Gillespie thinks it should be more: “A levy on tobacco companies would ensure there is sustained funding for tobacco control thus crucially help to drive down smoking rates.”

Such action would certainly focus Philip Morris on promoting the development of a UK HNB market. Mark MacGregor, it’s director for Corporate Affairs said: “Our business is committed to going smoke free as fast as possible and ultimately stopping selling cigarettes altogether. What this research reveals is the huge variations in the decline in smoking in different parts of the country.”

“We want to play our part in working with local businesses, retailers and councils in the areas with highest smoking rates. It is not going to be easy getting smokers in these areas to stop. One of the keys to success will be ensuring they understand that there are more alternative options than ever that can help them give up cigarettes for good.”

Philip Morris has launched a website to detail the findings. Areas listed that won’t be cigarette-free until after 2050 includes:

Given that HNB is still a minority market in the UK, and stagnating in Japan, it is odd that the company writes: “heated tobacco has become very successful in several countries”.

If Philip Morris genuinely cared about a smoke-free future for the United Kingdom then why not put information about vaping (far more successful than HNB) in front of its own product?

The data it’s produced does highlight areas of concern. For example, it isn’t surprising that North Yorkshire features high on the first list.

The new ‘Don’t Be The 1’ campaign is running as part of North Yorks’ Stoptober festivities, urging smokers to learn more about quitting and “give it a go”, according to County Councillor Caroline Dickinson. "Getting the right support gives you a much better chance.”

A shame then that www.dontbethe1.tv stands out for its lack of any mention of vaping, the success stories vapers have had in quitting or reference to the success experienced by the nation’s other Quit units that adopted electronic cigarettes as a harm reduction tool.

The end of cigarettes might be on the distant horizon, but it’s still a way off as long as North Yorkshire plug tired methods and Philip Morris focuses on its profits. 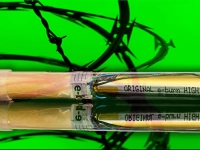