The World Health Organisation (WHO) is hosting the Framework Convention on Tobacco Control (FCTC) convention at the beginning of October in Switzerland. Its progress report on “electronic nicotine delivery systems (ENDS)” makes for grim reading. This, and a report funded by Mike Bloomberg, has prompted Clive Bates to partner up with other advocates and write to the Director General, asking for balance and common sense with vape regulations. 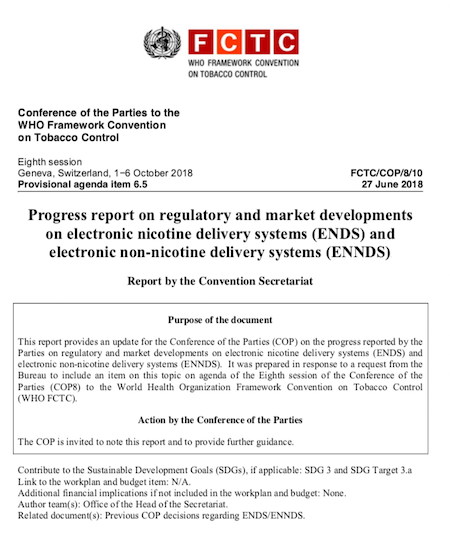 The WHO claims that vaping is banned in thirty of the member countries. It would be reasonable to assume that it would like to see this stretched to all 195-member states, given its previous bizarre claims about vaping.

Such a stance would be in keeping with the WHO’s first report in 2010, titled “Control and Prevention of Smokeless Tobacco Products and Electronic Cigarettes”. Controlling and banning is its method of operation, not understanding and reason.

The WHO was getting concerned by 2014: 50% of countries didn’t regulate vaping at all and it cherry-picked research to convince them they should. It suggested that member states should define electronic cigarettes as another form of tobacco product and “consider prohibiting them.”

The organisation begins its report by warning that, “according to surveys conducted by the European Commission between 2010 and 2017, the share of adult smokers in the United Kingdom of Great Britain and Northern Ireland that has tried ENDS has more than tripled since 2012, reaching 60% by 2017.”

“ENDS is becoming more popular,” it continues – as if this is a bad thing. But then it is a bad thing for the WHO, government officials and the tobacco harm “experts” who rely on a combination of tobacco tax revenue and pharmaceutical money. 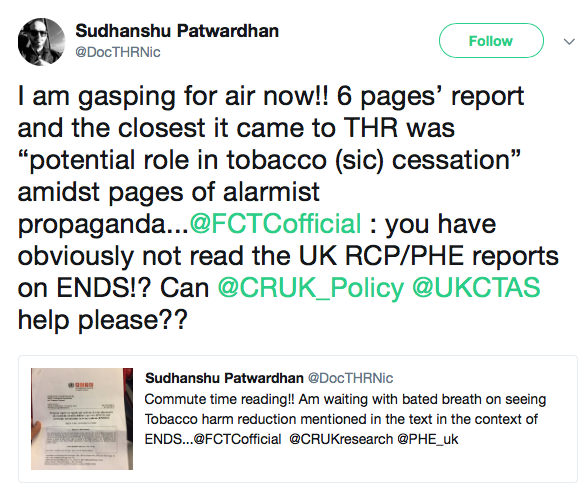 The organisation and those who feed their “research” into it are resolutely ignoring proclamation in favour of vaping by Public Health England, the Royal College of Physicians, Cochrane – and even some statements by the American Cancer Association and the Food and Drug Administration.

The WHO wants countries to adopt a universal method of describing vape products; it notes that there are currently seven variations:

The report’s authors implore member states to act, because of “potential consequences” in not doing so. Despite eight years passing since the WHO began beating this drum, there is no clear evidence of non-smoking teens “increasing uptake”. Likewise, when it warns about renormalising smoking, and “misleading health claims and deceptive marketing strategies,” it is still to produce any reasonable evidence not tainted by the respective authors.

It is absurd that the WHO claim concern about “the lack of proper information to consumers”, given its penchant for misdirection and outright lies. But when the billionaire Mike Bloomberg pays the bills, he gets to call the tune.

Bloomberg funded the WHO “The Global Tobacco Epidemic” report in 2017. He has been actively supporting anti-harm reduction measures around the globe – something that is mirrored in the WHO’s language of control and prohibition.

The main point looms large at the top: “WHO should reject prohibition and embrace ‘tobacco harm reduction’ and risk-proportionate regulation of tobacco and nicotine products.”

The letter expresses their joint concern at the push for vape bans and the risk this poses to current and ex-smokers. “E-cigarettes and other vaping products, heated tobacco products, modern smokeless tobacco and novel nicotine products,” they write, “form the basis for the public health strategy of ‘tobacco harm reduction’.”

It restates the obvious fact that the WHO is desperately hiding from: “They have one factor in common: they do not involve burning of tobacco leaf or smoke inhalation. It is smoke that causes the overwhelming burden of disease and there is no serious doubt that non-combustible products are far less harmful than cigarettes.”

The group state that such a move is “unethical, unscientific,” and “damaging to public health”. Moreover, a move to restrict or eradicate vaping from countries simply serves to bolster tobacco companies. A case in point is the recent ban on vape products in India – an announcement that was greeted with a huge bump in share value for the national tobacco company.

The document goes on to remind the WHO that the support and promotion of harm reduction is part and parcel of e articles of the FCTC: “1(d): ‘tobacco control’ means a range of supply, demand and harm reduction strategies that aim to improve the health of a population by eliminating or reducing their consumption of tobacco products and exposure to tobacco smoke’.” 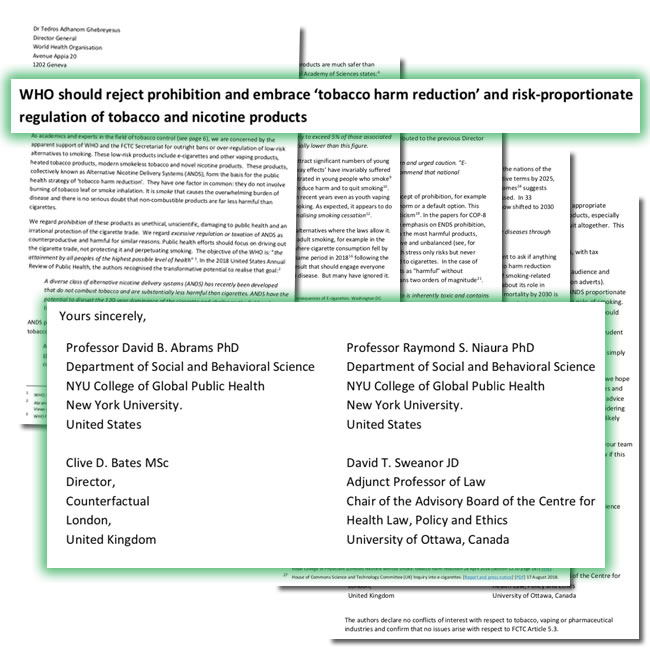 As well as citing the Royal College of Physicians report, the letter also details the United States National Academy of Sciences: “While e-cigarettes are not without health risks, they are likely to be far less harmful than combustible tobacco cigarettes.”

The group attack the adherence to old, debunked objections to adopting vaping to reduce tobacco harm. They highlight that the gateway doesn’t exist – or if it does then it’s a one-way away from smoking: “Youth smoking has fallen unusually rapidly in the United States.”

They continue to explain that, far from vaping renormalising the social acceptance of smoking, “it appears to do the opposite by promoting alternatives to smoking, thereby normalising smoking cessation.”

Tacked onto the declining figures for teen smoking rates, the group emphasise that adult smoking rates have plummeted too in countries that support ecigs as a cessation tool.

The four tobacco control experts state that the WHO’s “hostility to tobacco harm reduction” is “misplaced”, and call on it to change its approach and put “the health goal first”. There is only one way to do this, they argue, and that is to make regulations reflect the risk posed by electronic cigarettes and the other related products.