The pharma-funded department of Hate-Vape at the Keck School of Medicine, part of the University of Southern California, is going into battle against vaping once more. In the past, pro-harm reduction Twitter users have been accused of being tobacco company shills and “astroturf”. The haranguers from Heck have produced research claiming there really are bots spreading a pro-vape message. 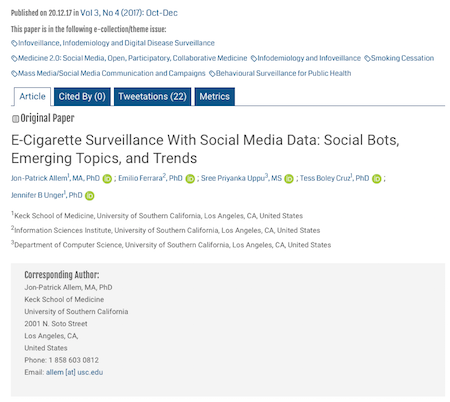 The researchers write: “As e-cigarette use rapidly becomes more prevalent, data from online social systems can be used to capture and describe the social and environmental context in which individuals use, perceive, and are marketed this tobacco product.”

“Internet searches (Google Web Search) for e-cigarette–related terms increased by 450% from 2010 to 2014 in the United States…Searches for terms indicative of purchasing e-cigarettes have outpaced searches indicative of interest in health concerns or smoking cessation… images often showed “cloud chasing” and “hand checks”, suggesting these are appealing characteristics of this emerging tobacco product.”

Lead author Jon-Patrick Allem, a research scientist in the Department of Preventive Medicine of the Keck School of Medicine, said: “We now have measles outbreaks in Southern California because people shared personal stories about how vaccinations reportedly caused their child to have autism. Social bots may not have the star power of Jenny McCarthy, but what they lack in fame, they make up for in quantity and determination. They are designed to promote a specific, slanted narrative — 24 hours a day, seven days a week.”

“Social bots can pass on health advice that hasn’t been scientifically proven. The jury is still out on if e-cigarettes are useful smoking cessation tools, but studies have shown that the chemicals in vape juice are harmful. Scientists are still trying to understand if vaping damages the respiratory and cardiovascular system. Bottom line: Online falsehoods can influence offline behaviour.”

Even if these bots exist, the research doesn’t tell us why or who is setting them up – or what they have to gain from truthfully promoting vaping as a way to continue to use nicotine but drastically reduce personal exposure to harm. The researchers didn’t care, they automatically took up the position that vaping is as bad as using a tanning bed.

“There are many unhealthy choices social bots can promote,” continued Allem, “and our future research will focus on other areas such as tanning beds, supplements, fad diets or sugary drinks. People need to be aware of these fake social media accounts, and public health campaigns should be implemented to counteract the most dangerous unhealthy behaviours these bots are encouraging.”

Allem claims that it is possible to identify bots from real people by looking at the hashtags they use. Bots, he states, are more likely to post hashtags like #quitsmoking and #health. Real people, on the other hand, focus more on behaviour apparently – using terms like #vape, #vapelife and #vapenation.

These hashtags worry people like Allem, ideologically opposed to vaping, as he explains: “Use of these hashtags may serve further internalization of, and social bonding around, vaping-related identities. These hashtags also suggest discussions of vaping may occur in an echo chamber on Twitter in which ideas and beliefs are amplified by those in the network, normalising vaping.”