The first positive study, carried out by an academic at the University of St. Andrews, modelled the effect of electronic cigarette aerosol emissions and compared them with the smoke produced when tobacco combusts. The second, by a research team in Italy and Australia, concerned itself with the particles contained within electronic cigarette vapour. Dr. Farsalinos lamented that the media is highly unlikely to cover either. 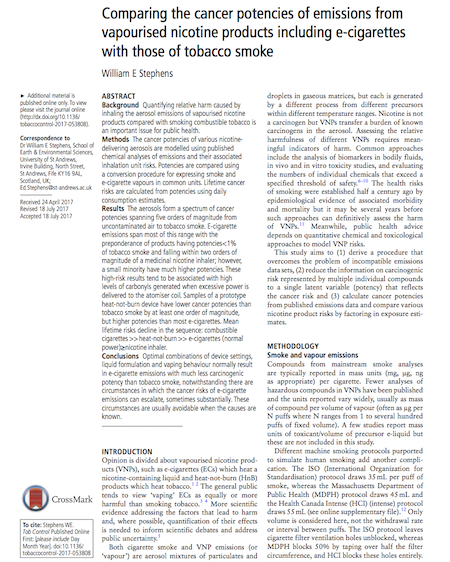 In Comparing the cancer potencies of emissions from vapourised nicotine products including e-cigarettes with those of tobacco smoke, Dr. William Stephens sought to quantify the relative harm of vaping when stacked up against the known dangers of smoking. He feels this is a priority within vape research as “the general public tends to view ‘vaping’ [electronic cigarettes] as equally or more harmful than smoking tobacco.”

Through modelling exposure and risk, Stephens estimated the lifetime cancer risks from daily exposure, but he noted that there’s a relationship between aldehyde production and the application “of voltages beyond the normal range of use”. He concluded that the bulk of studies demonstrate that “many [electronic cigarette] emissions have cancer potencies within an order of magnitude of a nicotine inhaler, a product generally regarded as safe.”

The conclusions of Stephens’ study “refer only to the chemical risks of cancer and do not account for any other carcinogenic effects such as those attributable to small particle sizes.” Happenchance, Scungio, Stabile and Buonanno published their paper looking at particulates just a few days later.

In Measurements of electronic cigarette-generated particles for the evaluation of lung cancer risk of active and passive users, the team explain that the reason the investigation is justified is because: “The use of these devices, however, exposes the users (‘vapers’) and passive ‘vapers’ to possible high concentration of fine and ultrafine particles (UFPs) which can deliver toxic and carcinogenic compounds.” 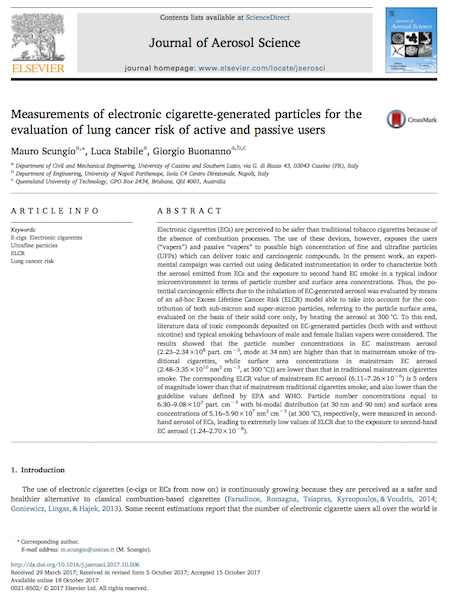 Unlike the hysterical studies produced in California, this one didn’t paint particle size and volume as the only aspect that matters. As Konstantinos Farsalinos points out: “The fanatic supporters of the particulate matter theory (which is a total misinterpretation of science and should be considered gossip rather than serious scientific debate) would support that e-cigarettes will increase the cancer risk by 100-fold compared to smoking.”

The team discovered that vapers are exposed to almost the same particle number concentrations as traditional cigarettes smokers – but because of the nature of the particles the surface are is far greater for cigarette users. This is the bit a newspaper would report or Simon Chapman would bring up in one of his unread blogs posts.

Farsalinos points out that this would mean a hundred-fold increase in risk compared to smoking – but, and here he celebrates the paper’s authors: “the careful assessment of the aerosol composition of e-cigarettes showed that the cancer risk for vapers is about 5 orders of magnitude lower compared to smoking. To be exact, they identified a 57,000-fold (thousand) lower Excess Lifetime Cancer Risk (ELCR) from vaping compared to smoking.”

The studies offer excellent news to everyone who has swapped from smoking to ecigs, and everybody interested in the harm reduction potential of vaping. Farsalinos struggles to be positive though: “I am certain this study will generate ZERO publicity. This is very common for studies showing anything positive on e-cigarettes.”