As we announced last week, Theresa May’s cabinet has finally given in to demands to publish the new Tobacco Control Plan for England. Politicians from both houses and across all parties had been pressuring the Conservative cabinet to act in order to reduce the incidence of smoking-related diseases. The role for vaping has never been more important and will set England on a separate path to the rest of Europe. 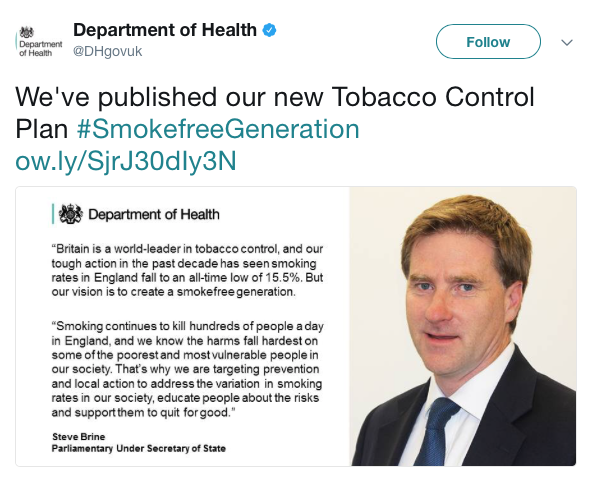 Lord O'Shaughnessy, the Parliamentary Under-Secretary of State for Health, made a written statement to the Houses of Parliament, which read: “The 2017-2022 Tobacco Control Plan for England sets the overarching strategic direction for tobacco policy. The last tobacco control plan ran from 2011-2015. All the ambitions set in the previous plan were exceeded, during a period when the Government successfully introduced a significant amount of legislation, including standardised packaging of tobacco products and a ban on smoking in a car when a young person is present.

“The new plan does not introduce new legislation. Instead, it shifts emphasis from action at the national level such as legislation to focused, local action, supporting smokers, particularly in disadvantaged groups, to quit. The plan lays down bold ambitions for reducing smoking prevalence in England, en route towards creating a smoke free generation. These are:

In order to accomplish these objectives, the government has pledged to provide training for all NHS employees, especially those working with patients accessing mental health services. High taxes on tobacco products will remain in place, as part of the deterrent, but more support will be given to those choosing to vape. In particularly, the government plan to provide better information on the relative safety of ecigs and how well they work as a substitute for tobacco cigarettes. This is important given the large amount of misinformation that has bred huge levels of misunderstanding. 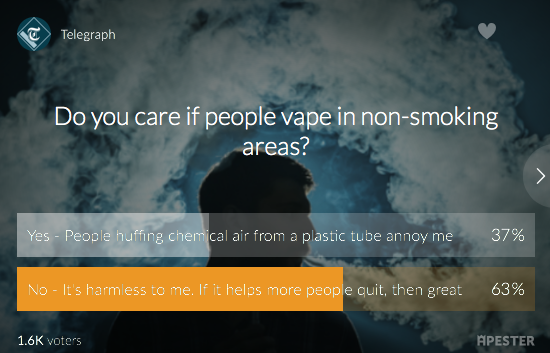 Prof Parveen Kumar, chair of the BMA board of science, is quoted as saying: “If we’re to stop the 79,000 annual deaths in England attributed to smoking, smoking cessation services and tobacco control measures must be adequately funded. Yet local authorities are reducing smoking cessation budgets, merging services into unwieldy departments or cutting services altogether. Cuts to these highly cost-effective services will only increase health inequalities and demand on tomorrow’s GP surgeries and hospital wards.”

Deborah Arnott of ASH UK agrees with Kumar: “Funding must be found if the Government is to achieve its vision of a ‘smokefree generation’. The tobacco industry should be made to pay a through a licence fee on the ‘polluter pays’ principle. Tobacco manufacturers are some of the most profitable companies on earth; they can easily afford the costs of radical action to drive down smoking rates.”

“The evidence is increasingly clear that e-cigarettes are significantly less harmful to health than smoking tobacco. The government will seek to support consumers in stopping smoking and adopting the use of less harmful nicotine products.”

It is highly possible that ministers are embracing vaping due to its minimal cost to the NHS. The upside of this is that employers are being advised to allow vaping in the workplace, and enclosed open spaces (such as sports stadia) will be encouraged to rewrite their vaping policies.