California is an amazing place. The state boasts spectacular scenery, an incredible climate, and (if the University of California is to be believed) teenagers who act differently to all of those in the rest of the world. In California, “e-cigarettes fostered continued or increased smoking over time.” Either the researchers are committing barefaced lies or something very odd is going on here.

Firstly, as a person with a mind demanding answers, you will be asking where you can read this study? The simple answer is that you can’t. The first rule of the anti-vaping (pharma funded?) research community is that all studies are hidden behind a paywall that only the privileged few will ever get through. Fortunately, Planet of the Vapes has access to a special tunnel.

Locked away from enquiring eyes exists the paper “Does e-cigarette use predict cigarette escalation?” and the commentary “Do E-cigarettes reduce smoking?” The commentary was written about the study before the study had even been published – so the two get an airing at the same time in this month’s copy of the journal Preventative Medicine. 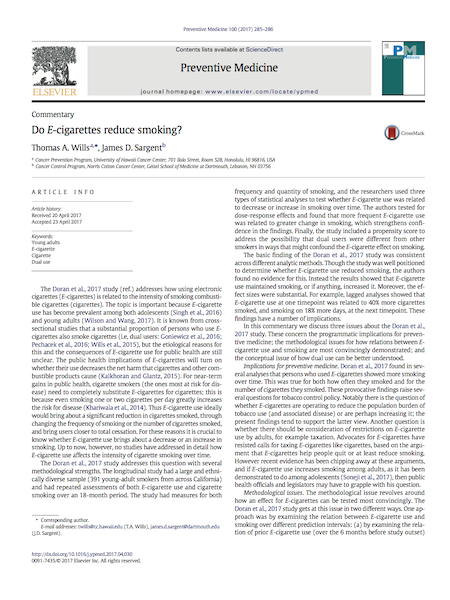 Neal Doran, Department of Psychiatry, acted as lead for the team. He said: “The participants who were vaping ended up using more cigarettes. It’s actually a risk factor for increasing their cigarette use. They’re not using e-cigarettes to try to stop smoking. The new study’s findings are consistent with the worry that, regardless of whether vaping is itself unsafe, vaping causes worse outcomes because it leads to more consumption of cigarettes.” 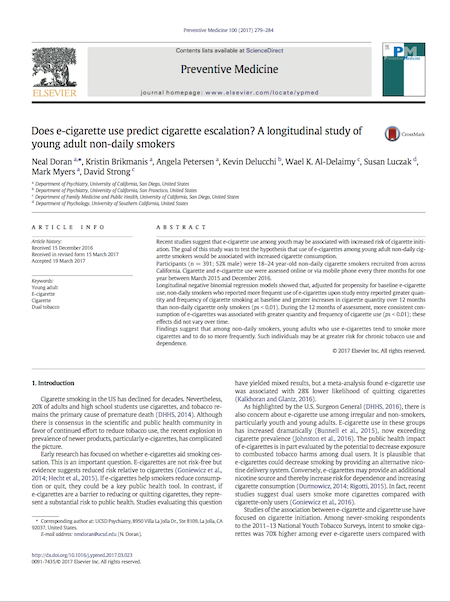 Recent data produced by the U.S. Centres for Disease Control and Prevention (CDC) illustrated how mistaken Glantz and Doran are – but they will resolutely refuse to accept it because then the cheques would stop rolling in. Teenage smoking, in America as in Britain, continues to plummet to record lows. It is clear to everybody, regardless of having experienced the sensational difference between vaping and smoking, that vaping is a gateway in one singular direction – and that is away from smoking.

We could detail the inherent flaws in conducting research that takes place via a phone app, we could add that paying participants to take these essentially anonymous tests further destroys any scientific validity of the results, but there is little point. As previously stated, the simple presence of Glantz and the employers of the research team is enough to totally discredit their activities.

Having fought so hard against tobacco companies for decades, Glantz has now become the inverse. He is the opposite side of a coin, equally repugnant in his methods and as worthy of the attention of politicians constructing legislation. And, by writing their (closed to public scrutiny) commentary “In conclusion, we have noted that the Doran et al., 2017 study provides a fairly convincing demonstration that E-cigarette use increases the frequency and quantity of cigarette smoking,” Thomas Wills and James Sargent have also demonstrated how little weight their words now carry too.

Facts: To date, no respected study has demonstrated a progressional gateway from vaping to smoking. The Cochrane Review, Public Health England and the Royal College of Physicians all rate vaping as being at least 95% safer than smoking. The NHS has embraced vaping as a method of harm reduction and encourages smokers to consider adopting it to reduce the danger posed by tobacco cigarettes.