The Royal College of Physicians (RCP) is a professional British organisation with a global reputation. The RCP takes a lead in the development of clinicians, the NHS and takes positions on certain things through the dissemination of reports and studies. The 95% report from Public Health England was a massive goal, giving vaping the lead in the debating cup final. The RCP’s “Nicotine Without Smoke” report puts the harm reduction argument 2-0 up in injury time.

The report stretches to almost 200 pages and goes into great depth on all aspect relating to tobacco-control policy and electronic cigarettes. It covers everything from the science behind nicotine’s absorption and trends through to harm reduction and ethics. Here, we present an overview of the document and some of the comments it has drawn today. POTV will cover aspects of this report, and any fallout, in further depth over the coming week.

While the Public Health England report was attacked, albeit clutching at straws, for some purported link to Big Tobacco, this RCP study has a majority of contributors free from any external interests – and those who did declare some are mostly the result of pharmaceutical funding for discrete projects or speeches.

The report points out the obvious, that smoking is the biggest avoidable cause of death and disability, and social inequality in health, in the UK. The dangers posed by smoking, it says, will result in a cost to society as a result of individuals who are smoking today. 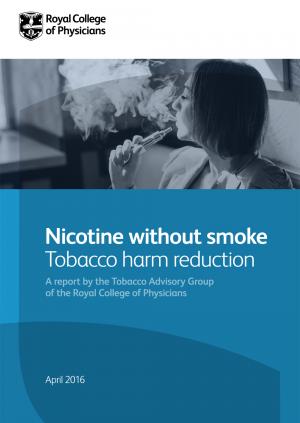 It advocates continuing a vigorous pursuit of conventional tobacco control policies to encourage more smokers to quit smoking, but adds the caveat that quitting smoking is very difficult. The RCP warn that, as it currently stands, most adults who smoke today will continue to smoke for many years – because, repeating the old adage, people smoke because they are addicted to nicotine (but are harmed by the smoke).

The RCP propose that supplying nicotine in a form that contains no smoke prevents most of the harm from smoking and this has traditionally been done through a medical route. The use of these traditional nicotine replacement products (NRT) are most effective, they note, when used in conjunction with the consultation services provided by regional quit programs.

Notably, the report highlights, is that NRT becomes far less successful when used independently by smokers trying to quit without the support of a quit counsellor. The same, they recognize, can’t be said for electronic cigarettes. These have been marketed as consumer products and are proved to be far more effective than NRT products.

And this brings us to the point of whether the contributors believe vaping to be efficacious: does it work? Notably, ecigs tend to be used without quit support and so it carries huge weight when the RCP state: “[they] appear to be effective when used by smokers as an aid to quitting smoking.”

Of course, it’s not all positive – but the report is honest. It draws out the salient point that e-Cigarettes are not made to medicines standards. Although manufacturers may make mention of pharmaceutical grade nicotine, the report mentions that ecigs “are probably more hazardous than NRT.” This caveat is tempered by reference to the Public Health England figure: “the hazard to health arising from long-term vapour inhalation from the e-cigarettes available today is unlikely to exceed 5% of the harm from smoking tobacco.”

When the report logs: “technological developments and improved production standards could reduce the long-term hazard of e-cigarettes”, it raises the spectre of the Tobacco Products Directive’s probably impact. Consumer demand for better products that deliver nicotine and flavour more effectively has driven the continual development of atomisers and mods. If the RCP stand behind their statement about technological development, and the government welcomes the report, then the TPD becomes untenable - its prescriptive nature will stamp out innovation. 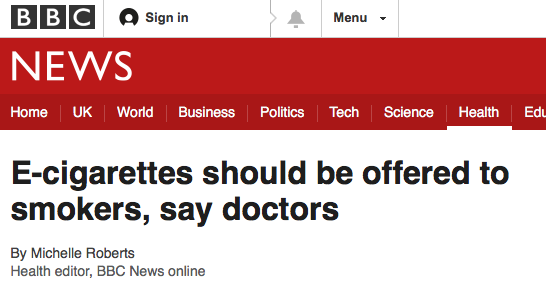 Those who are ideologically or financially driven to object to vaping cling to three key criticisms of electronic cigarettes. We see this emanating from California (and Stanton Glantz in particular) all of the time, spouted by Martin McKee at home and was the cornerstone of Labour’s failed attempt to restrict ecig use in Wales. Their fear agenda, drip-fed to the media on a frequent basis and used as an argument for legislation, consists of three key aspects:

The RCP report addresses these objections in a short, sharp rebuttal: “To date, there is no evidence that any of these processes is occurring to any significant degree in the UK.”

Standing firm, the RCP report states that all of the current evidence supports the notion that electronic cigarettes are being used (almost exclusively) by ex-smokers or by smokers looking to quit. The data showing a continual decline in smoking rates quashes any suggestion of normalisation or a gateway effect. Likewise, the longitudinal studies carried out by Professor West suggest, along with comparable data, that vaping works as a quit tool.

“There is a need,” the report says, “for regulation to reduce direct and indirect adverse effects of e-cigarette use, but this regulation should not be allowed significantly to inhibit the development and use of harm-reduction products by smokers.” It’s a cry for light touch regulation, far lighter than that proposed by the Tobacco Products Directive. It’s a clarion call for the adoption of common sense in the treatment of electronic cigarettes that places health (not dogma and zealotry) at the heart of decision-making.

The RCP advocate “a balanced approach” to any regulatory strategy, be it an attempt to reintroduce measures in Wales or the implementation of the Tobacco Products Directive; an approach that ensures product safety but doesn’t discourage smokers from making the switch from traditional tobacco. Moreover, the RCP raise the fears that ill-considered regulations pose the real risk of having a negative impact on tobacco control targets.

But what of the danger that tobacco companies are now trying to shoehorn their way into the marketplace? Those who speak out against vaping frequently make mention of ecigs using the Big Tobacco playbook in order to grow sales volumes. With the historical baggage this industry brings with it, it is not surprising that people get worried. The report says: “The tobacco industry has become involved in the e-cigarette market and can be expected to try to exploit these products to market tobacco cigarettes, and to undermine wider tobacco control work. However, in the interests of public health it is important to promote the use of e-cigarettes, NRT and other non-tobacco nicotine products as widely as possible as a substitute for smoking in the UK.”

The stance taken supports the notion that regulatory focus should be on the products and benefits they offer rather than fixating on previous products produced by a manufacturer as the opportunity for public health is too great to be held back. 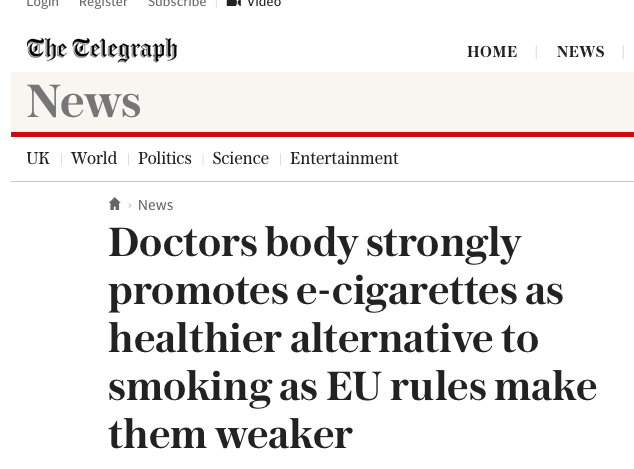 Prof John Britton told the BBC: “The public need to be reassured this is not a new nicotine epidemic in the making. E-cigarettes have very little downside and a lot of potential benefit.”

Also, in an interview with SKY, Britton added: “The growing use of electronic cigarettes as a substitute for tobacco smoking has been a topic of great controversy, with much speculation over their potential risks and benefits. This report lays to rest almost all of the concerns over these products … Smokers should be reassured that these products can help them quit all tobacco use forever.”

The BBC also reports a Department of Health spokesperson saying: “We want to see a wide range of good quality e-cigarettes on the market including licensed products whose safety, quality and effectiveness are independently assured.”

Cancer Research UK’s Alison Cox said: “E-cigarettes have real promise in helping to reduce the huge death toll from tobacco. [The RCP’s report is] an accurate summary of the latest scientific evidence on e-cigarettes. Tobacco kills more than 100,000 people in the UK every year, we should grasp every opportunity to encourage as many people as possible to stop smoking for good.”

Jane Dacre, RCP’s president, said to The Guardian: “with careful management and proportionate regulation, harm reduction provides an opportunity to improve the lives of millions of people. It is an opportunity that, with care, we should take.”

Linda Bauld told Reuters: “The ideal is for people to use nothing, but when the alternative is smoking, people should be encouraged to use nicotine delivered in a cleaner form than in deadly cigarettes. This is what tobacco harm reduction is - it reduces the harm from tobacco while recognising that some people will still use nicotine in other safer forms.”

Deborah Arnott, ASH's chief executive, commented: “Electronic cigarette vapour does not contain smoke, which is why vaping is much less harmful.”

Duncan Selbie, chief executive at Public Health England, told the Mail: “The evidence is clear; vaping is much less harmful to health than smoking, and this report further highlights the important role of e-cigarettes in reducing the deadly harms smoking causes. E-cigarettes are the most popular quitting aid in England and local stop smoking services are the most effective route to giving up, we encourage smokers to combine these, giving them an extremely good chance of quitting smoking successfully.”

Dr Mike Knapton, Associate Medical Director at the British Heart Foundation, added: “E-cigarettes are new devices commonly used by smokers that deliver nicotine without tobacco, and are an effective way of reducing the harm caused. We welcome this report which says that e-cigarettes can be an effective aid to potentially reduce harm from smoking and lower the risk of death and disability. There are 2.6 million e-cigarette users in the UK, and many smokers are using them to help quit. Although more research is needed to establish the long term safety of e-cigarettes, they are likely to cause significantly less harm to your health than smoking tobacco.”

The Royal College of Physicians’ report is, without doubt, a stunningly comprehensive document. It lays bare the lies behind those who advocate a tough approach to the control of vaping and vapers while presenting hard facts for legislators to embrace. It would be fair to say that it, in conjunction with the Public Health England report, places the UK squarely at the vanguard of harm reduction. If there is any sense residing in Parliament, politicians ought to take on board its recommendations and pull the Tobacco Products Directive forthwith before it has a crushing impact on the UK’s small-to-medium electronic cigarette businesses. 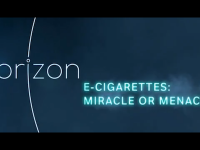 Vaping Supported on the BBC