The Right Honourable Sir Kevin Barron MP is no stranger to the world of harm reduction and vaping as he used to be Parliament’s health committee chair. Over the last couple of years he has been proactive in discovering as much as he can in an open manner about the new technology. An ex-smoker himself, he has come down firmly on the side of electronic cigarettes as a harm reduction tool.

Under his guidance, in 2014 the All Party Parliamentary Group (APPG) previously organised a meeting titled “Electronic Cigarettes: Gateway to Addiction or Cessation? Developing an APPG Position”. The meeting built on information (1, 2) they received from a prior harm reduction seminar they hosted in 2012.

The New Nicotine Alliance commented following the meeting: “The summary of Sir Kevin Barron MP at the end was really very positive. He appears to fully take on board the opportunities offered by e-cigarettes, with some reservations in the area of marketing.” He co-authored a letter and a position statement laying out his views following the meeting.

When faced with the prospect of vaping being banned from the Houses of Parliament at the start of 2015 he said: “We have to be very careful when people are coming off cigarettes and on to e-cigarettes that we encourage them. It's better for their health and there's no good evidence that e-cigarettes are being used by people to start smoking.” 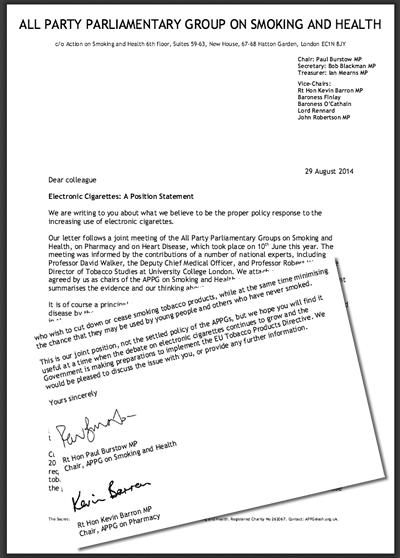 The distrust he harbours of the marketing being adopted by some companies continued throughout 2014: “Whilst we are pleased about the new Committee of Advertising Practice (CAP) rules that aim to curb advertising of e-cigarettes to young people, inappropriate images can still be seen on billboards and online adverts for these products.”

Consequently it is interesting that Kevin Barron has spoken out in the wake of the Welsh moves to ban vaping from public areas. In the video available to view on YouTube he says: “Ecigs have an important role to play in smoking cessation, I’m absolutely convinced of that.”

While some have chosen to deride or ignore the evidence in favour of vaping Barron hasn’t: “Public Health England did a summary, it was a ground-breaking thing to bring everything together about e-cigarettes, and they turned round to say it’s at least 95% safe – the vapour you see is not smoke.”

In direct reference to the Welsh moves he commented: “There is nothing that comes from vaping, the vapour that comes off it [an ecig] that is harmful to health. There is no scientific evidence that it is, at the moment. And it seems to me that we’ve got to change attitudes: that people should be staying inside and vaping in public places, instead of that you’re sending them outside to stand alongside people who are smoking cigarettes. And they’re trying to get off them!”

In a moment of frank honesty, he believes that the main reason people are opposed to it is because “it’s not their product”. While defending the rights for manufacturers to turn a profit from the technology might not make him popular with those who despise Big Tobacco it distances him from the blogger Dick Puddlecote’s allegations that he’s afraid of corporate advantage and influence.

Broadly speaking, this will be a welcome statement on vaping for many vapers – even if some disagree with individual comments. You can watch it in full below: