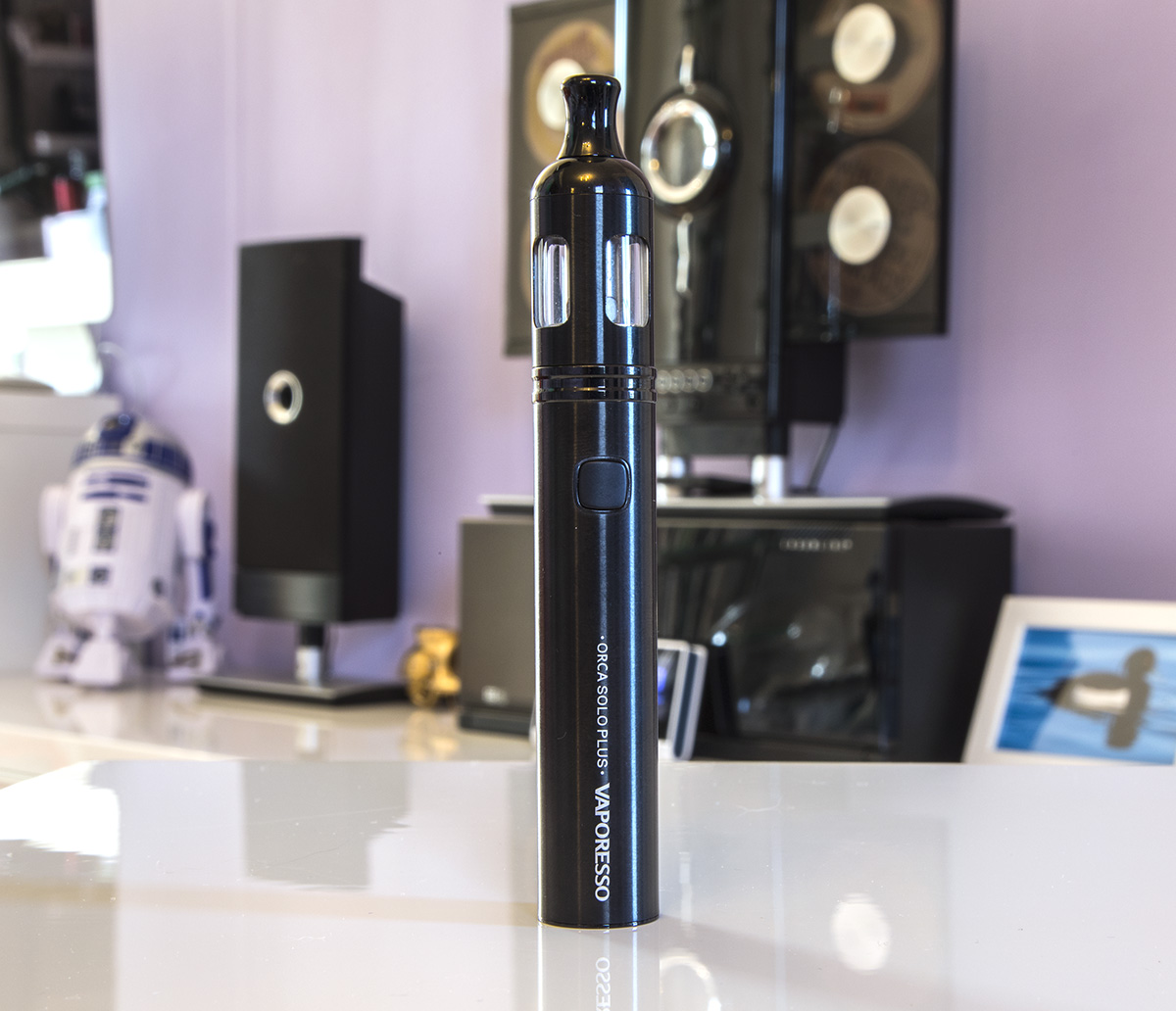 A mystery package arrived from Vaporesso to review. After opening up the box my first impressions were “Not another stick kit?!” and, already underwhelmed, I couldn’t see anything special about it. So was I in for any surprises? Read on to find out.

Got your needs fully covered, and even a little more-so. ORCA SOLO PLUS is not just a size upgrade of the ORCA SOLO. We have introduced the new MESHED coil, the ORCA SOLO PLUS is born ready for great flavors, plus the CCELL coil provided for the optimal delivery of nic-salts. What's more, the 50% increased battery capacity enables lasting vaping experience. Are you ready to get more from the orca? 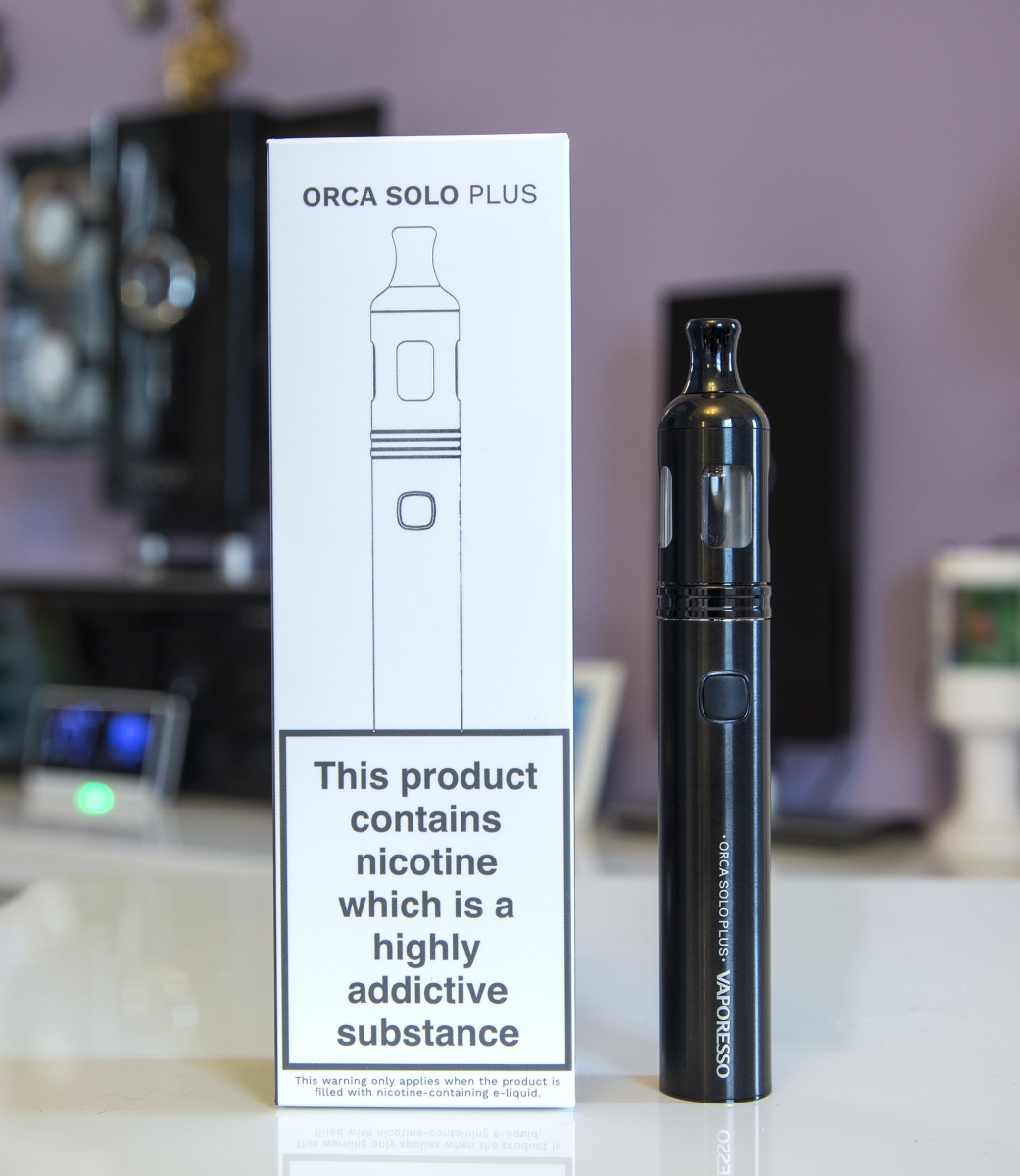 As you can see by the photos, the packaging is very bland and basic, not quite what I had come to expect from Vaporesso, but who cares about the box as it either gets binned or stored away. Inside the box was pretty much the same, a cheap blown plastic shell holding the main stick, coils, micro USB, spare glass (which was taped to the underside) and instructions. 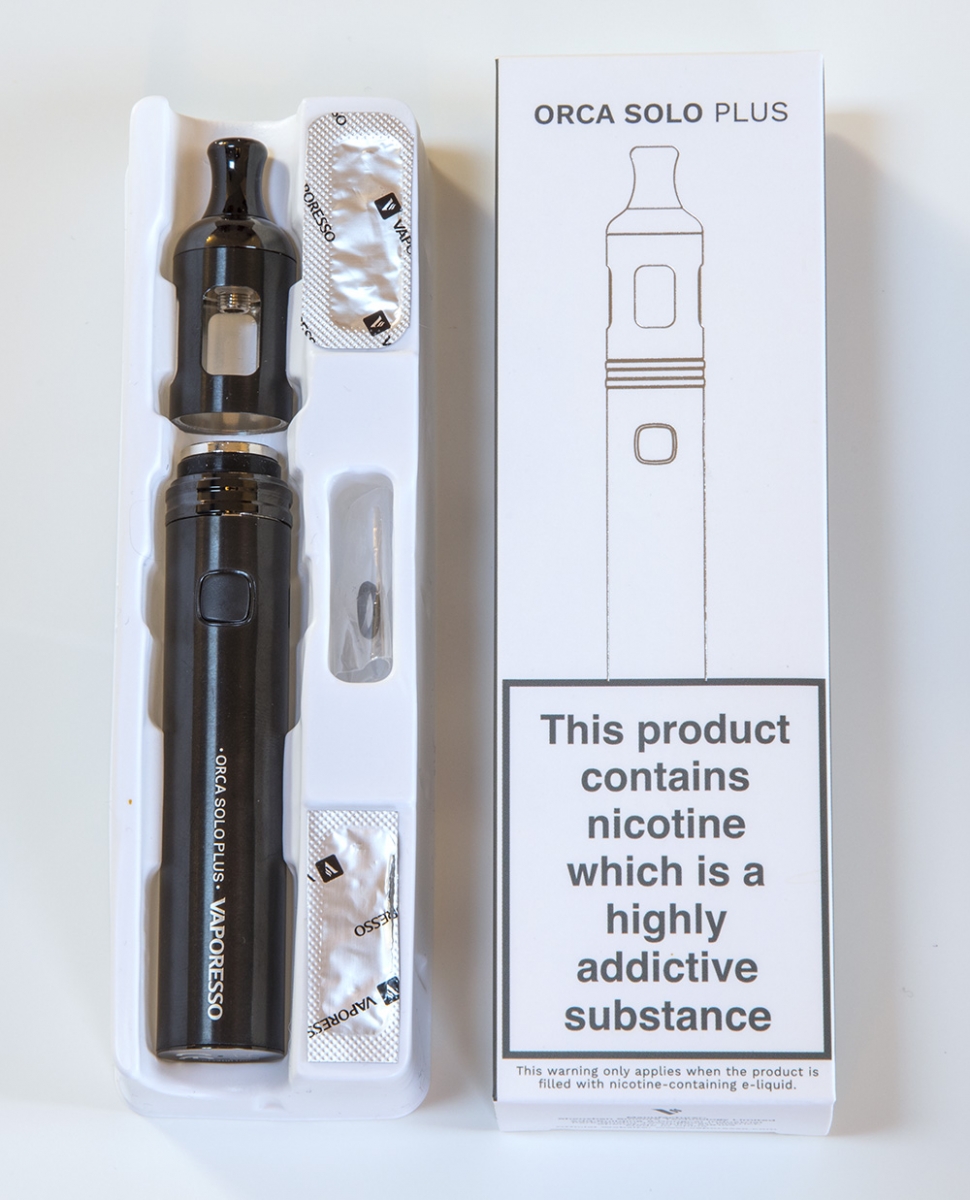 Here are the full contents: 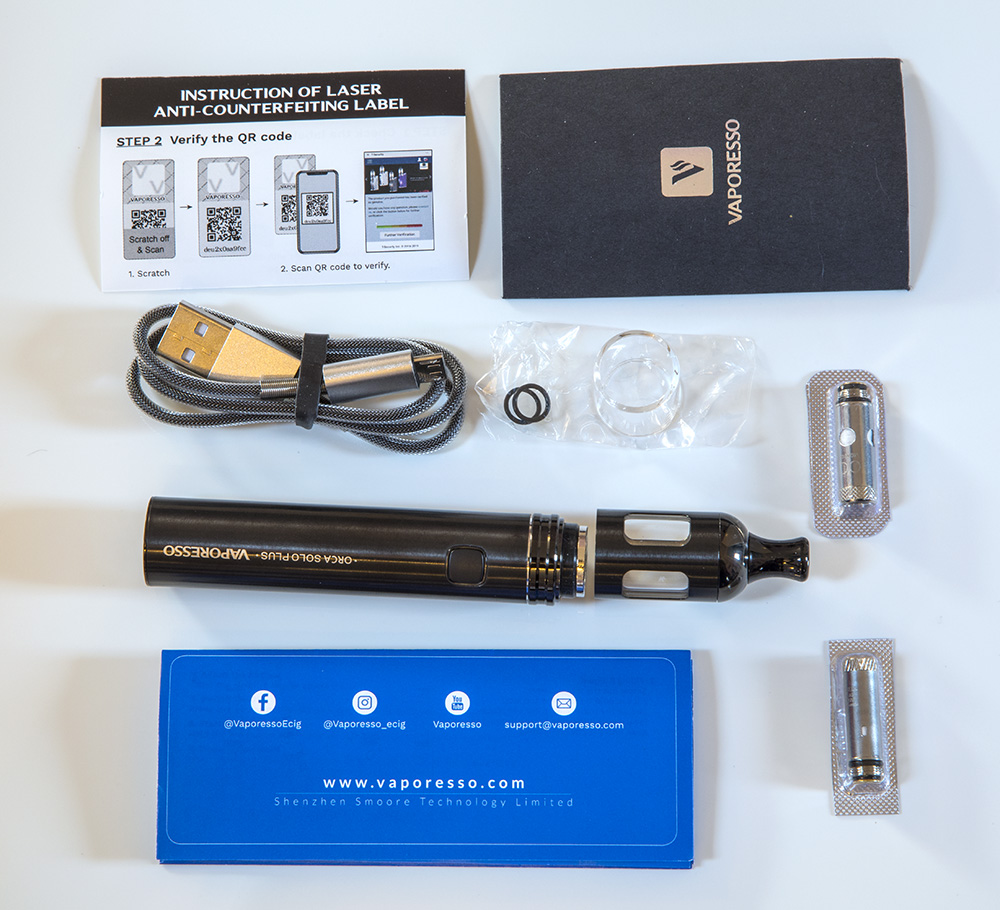 First impressions weren’t good, it all looked very 2017 and I couldn’t see any new innovation to make this kit stand out. I had a quick read of the manual in case I had missed anything magical but nope, all was as seen. It is a pen/stick mod with a strange way of assembling, however the coils were more interesting with a brand new designed mesh for DTL (or MTL?) and a Ccell for MTL.

I know it’s all sounding pretty negative so far, but bear with me as it definitely does get better………..

I hadn’t seen this way of assembling before as I did not try the original Orca Solo, so I have to admit I was a bit confused as I was half expecting the glass section to screw in place in the top cap but no, you screw the coil into the battery, the glass press fits on it too  then the top cap screws onto the coil. I’m a little mystified by this method as I can’t see the benefit unless I’m missing something, though to be fair it is classed as an AIO (All In One) and not a mod and tank. 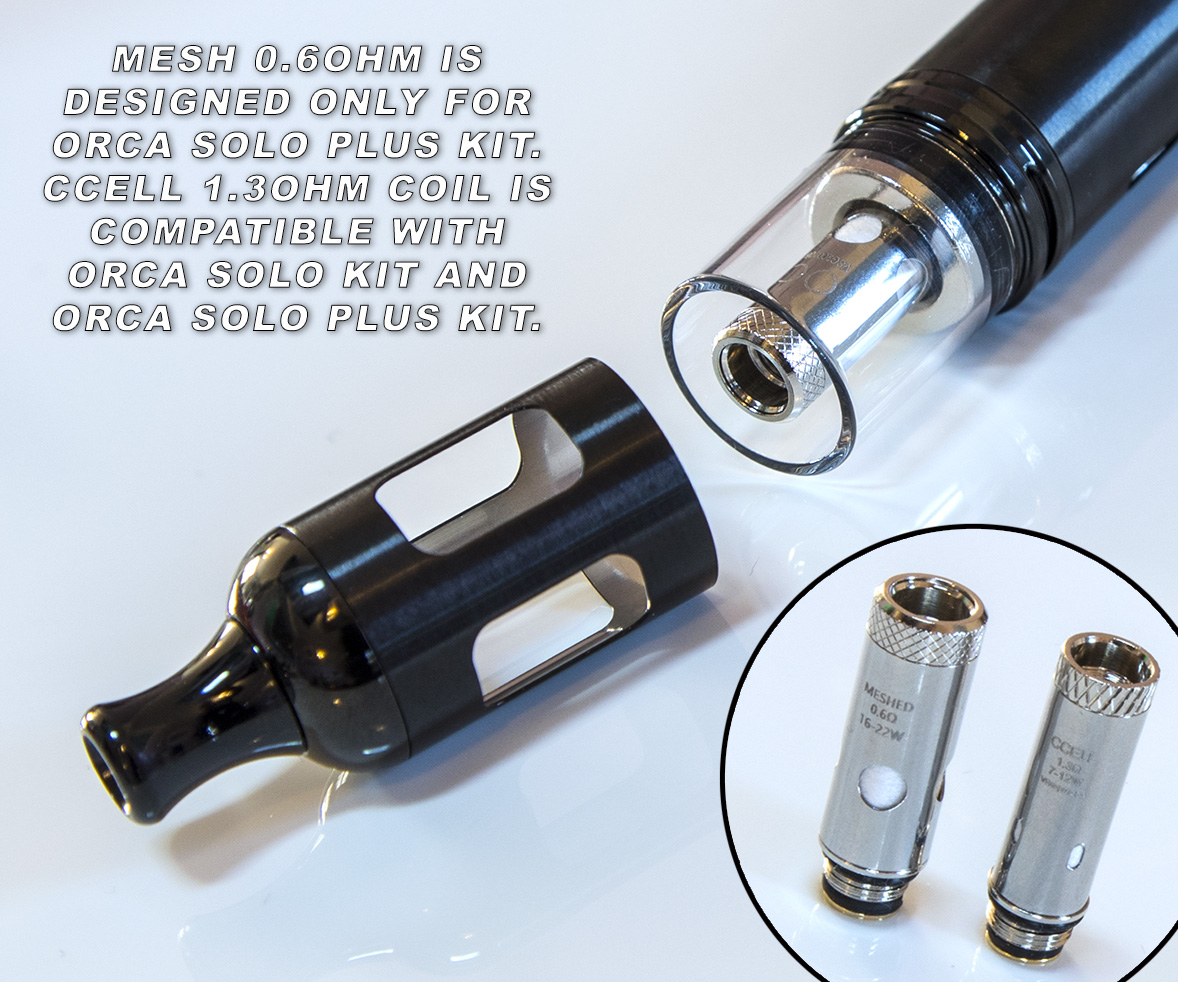 Operation is simple, and basic functions make this kit very user friendly and ideal for a starter kit:

five Clicks of the fire button turns the mod on/off

three fast click of the fire button to adjust the power output of the selected coil:

Charging the 1200mAh battery is achieved via micro USB (2020 and no USB-C?) with the included cable. Charging status is displayed by the colour LED:

The green LED will stay lit once fully charged, and charging from low took just over an hour. Allow a little longer if the battery is flat, though I recommend keeping it topped up before it gets to red.

There are various protections in place to ensure this device is safe, though as with most vapes, it’s best to turn the device off when not in use (especially if it’s in your pocket or bag).

The chassis is all metal and the top cap that covers the glass is a nice feature with its cage style to protect it from most accidents. The four viewports still make it easy to see your juice level. The drip tip (mouthpiece) is excellent and very comfortable, it is a standard 510 and removable so you could use your own if preferred.

There is a single sided adjustable airflow control ring (AFC) between the battery and tank which is a little tricky to adjust but in a good way as it stays where you put it. I will go into the actual airflow later but it hasn’t changed from the original Orca Solo and is clearly designed for MTL.

Styling is minimal as you would expect from a stick kit. The fire button is quite small but proportionate and slightly protruding so you can find it without looking. It is backlit with the LED which is pretty bright, the micro USB port is on the side near the fire button.

Branding is minimal and unobtrusive. It feels very comfortable in your hand with its 18mm diameter body, the weight balance is almost dead centre which impressed me a little as top heavy pens fall over easily. Other than that, there’s not a lot more to say. 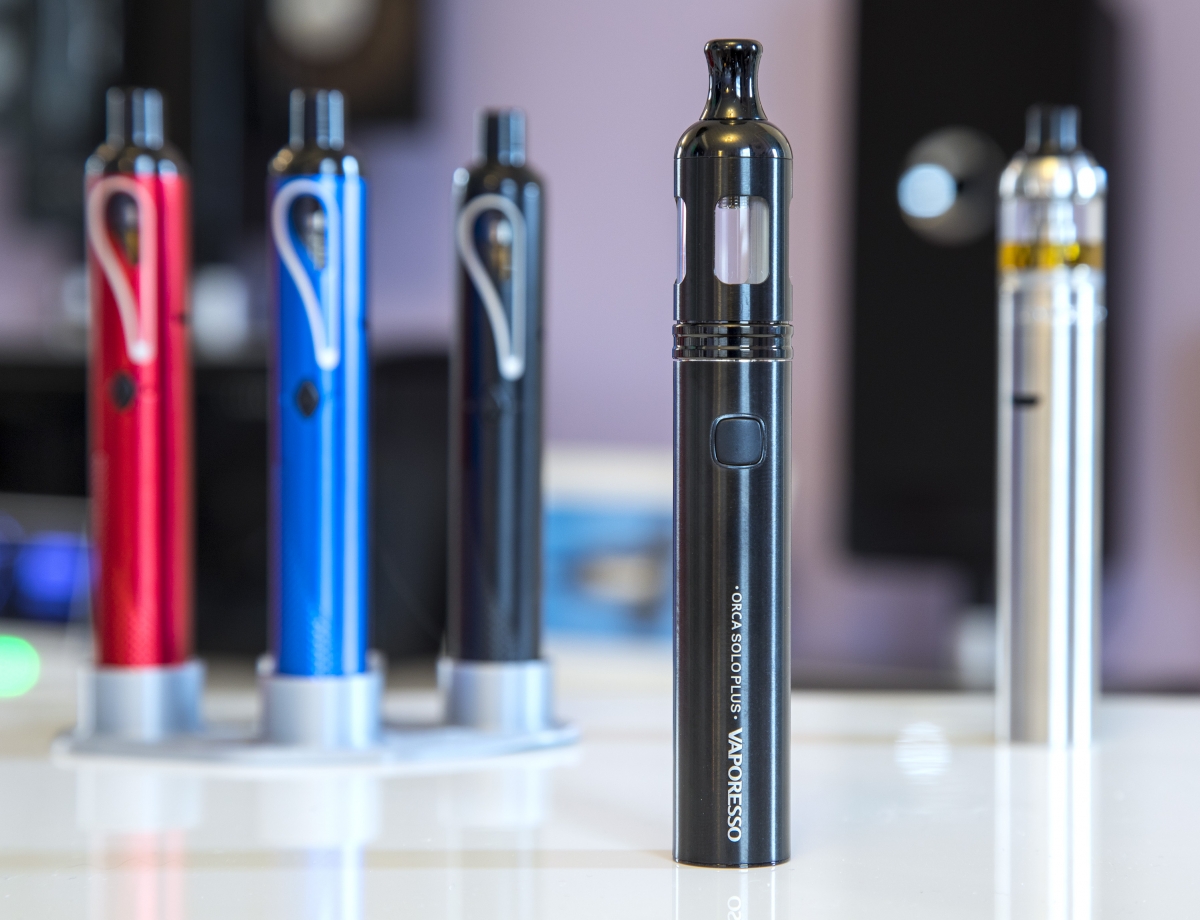 A bit of a mixed bag performance wise. With the inclusion of a sub ohm 0.6Ω mesh coil, it appears this upgrade is intended for DTL as well as the 1.3Ω CCell coil for MTL, so I started off with the 0.6Ω mesh coil using 70VG / 30PG freebase 3mg liquid. The first thing that struck me was airflow, or lack of it. With the narrow bore drip tip and small single sided airflow control ring fully open, the draw was a very restrictive DTL draw. This will be a big issue (not a homeless magazine) for any true DTL lovers that like a loose airy draw, however as I like MTL and DTL so an in-between draw didn’t bother me as much as I thought as the flavour was simply superb and I soon got used to the restrictive draw which was its only saving grace at this point. With Vaporesso's already amazing Target PM80 for DTL, this Orca Solo Plus felt a let-down and redundant.

Juice capacity and battery life also became an issue. I felt like I was forever topping it up and the battery sag was more noticeable as it soon dropped in power.

Clouds wise, if you are a cloud chaser then again this isn’t one for you. Clouds were not bad, but nothing like a traditional sub ohm tank with larger airflow.

Fortunately Vaporesso sent me additional 0.6Ω coils so I thought what the hell, I will try 50VG/50PG 20mg Nicotine Salts with it. Using a fresh coil and switching over to MTL, things started to get better (much better), and the airflow was absolutely spot on, very tight at the smallest setting. I like it tight (fnar fnar) but I actually ended up selecting the second tightest airflow option. Anyone who enjoys the Artery Pal 0.6Ω HP Mesh cores will know how good mesh can be for MTL. I would go as far as to say this was better due to the airflow. 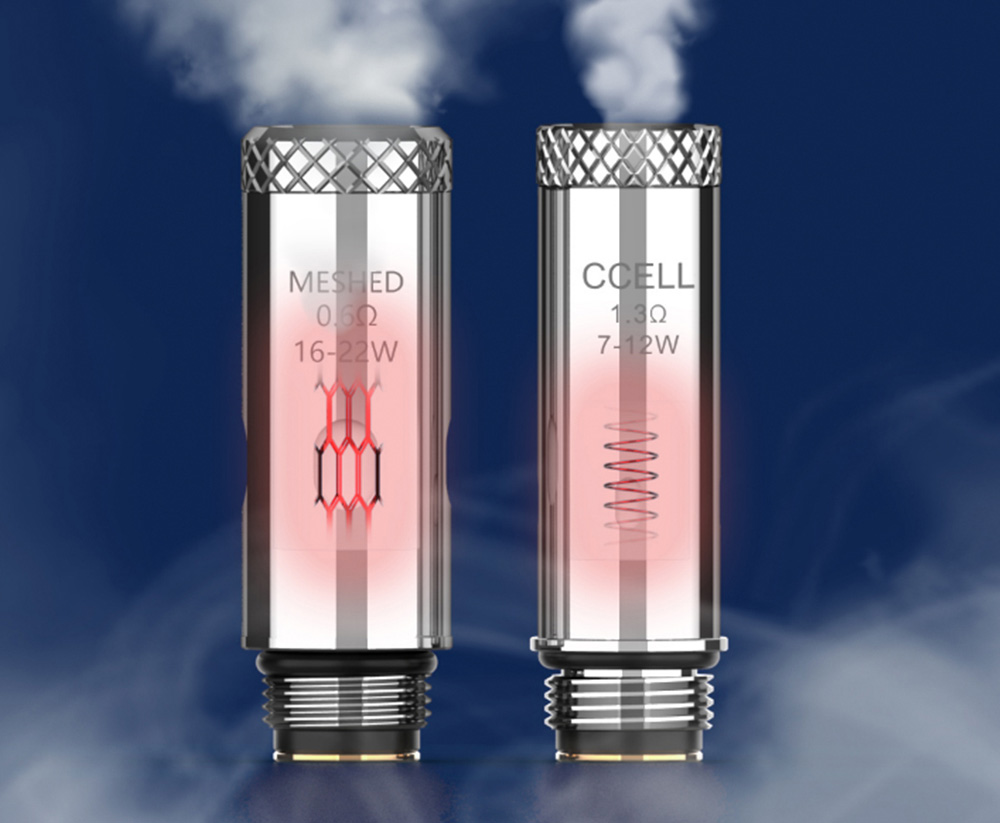 So with things looking up. I enjoyed the 0.6Ω coil for a few days before switching over to the older 1.3Ω CCELL coil (ceramic). I wasn’t expecting much, especially after using mesh, but even at the lower power (which I use to break in a new coil), I felt more at home with the MTL style. The flavour was really good and possibly the best I have tried for standard wire stock coil MTL.

Vapour production was minimal as you would expect from an MTL coil, ideal for stealth vaping and indoor vaping. Battery life was obviously much better with this coil and easily lasted me a full day of regular use, though power dropped off later in the day.

The only other thing worth commenting on is something that I having being doing more of recently, and that’s taking a DTL hit using nicotine salts whenever I feel the need for a proper nicotine hit (which nic salts are perfect for). This is something I often try in the morning (similar to that first ciggie hit), and this is where the restrictive DTL airflow comes in handy. It works a charm and the Orca Solo Plus had won me over at that point.

I have tried a few pen/stick style kits but the only two I have continued using are the Artery Pal Stick and the Vapefly Galaxies MTL Stick, so how does the Orca Solo Plus compare? 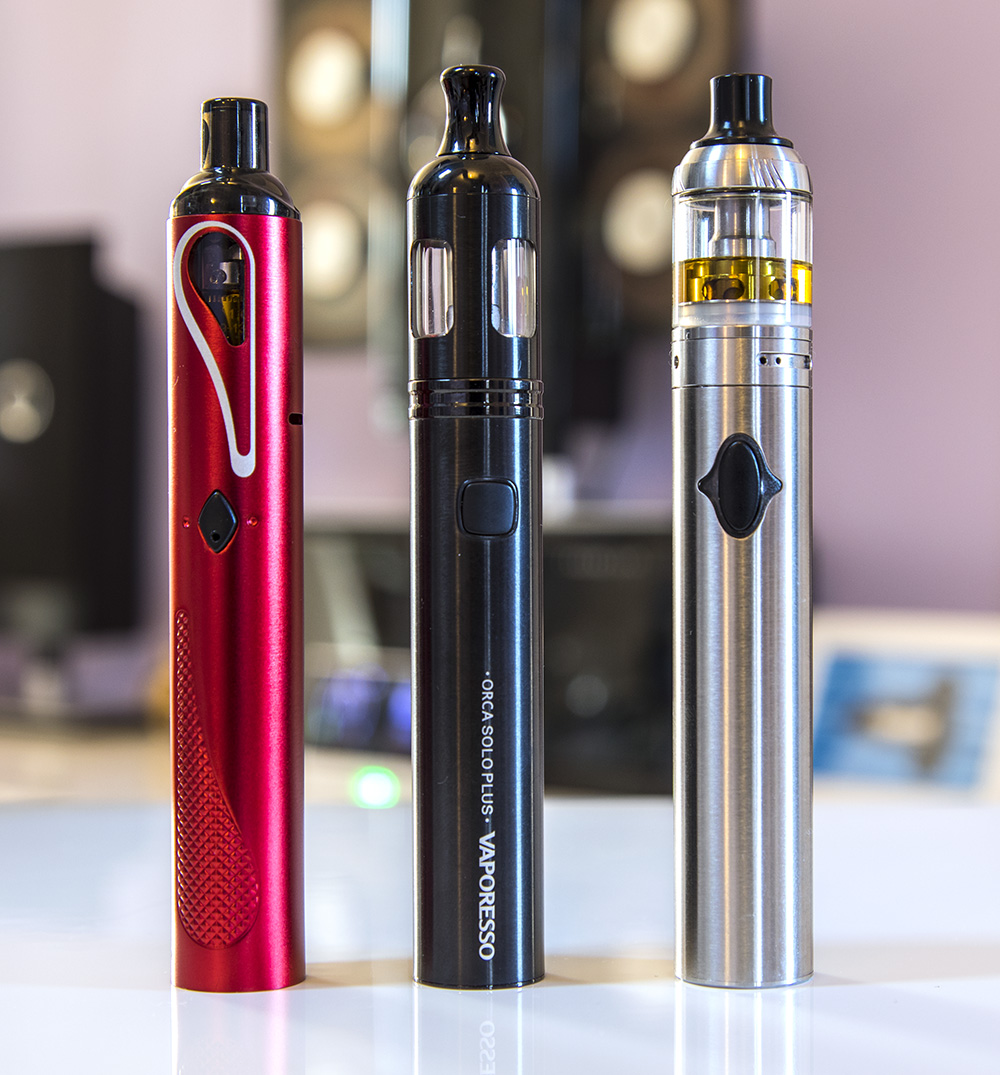 Artery Pal Stick
Size, ease of use and functionality were pretty much the same, but the Solo Plus was a clear winner for battery life, airflow and a proper MTL experience, to the point I won’t be buying any more Pal coils anymore.
Winner winner chicken dinner = Orca Solo Plus

Vapefly Galaxies MTL Stick Mod
The size is 19mm compared to the 18mm of the Orca Solo Plus, the battery is pretty much the same (1400mAh) and it is more of a traditional ‘mod & tank’ with its 510 threaded connection. The airflow is better, it’s heavier and feels a bit better so I thought I would prefer it over the Orca Solo Plus, but there is one huge difference and that’s the coils. The Galaxies' 0.5Ω mesh coils are just too harsh for MTL even on the lowest power, comparing the two really highlighted this and it turns out I won’t be buying any more Galaxies coils.
Winner winner the other is a binner = Orca Solo Plus

So that was pretty conclusive and helps my stock coil mass consumption and confusion.

So what started out really poorly and with low expectations turned out to be a really great pen/stick/aio/vapethingiemijig which eliminated two of my favourites. The main flaw is the airflow which will be a deal breaker for some, for me its weakness is its strength as the airflow is perfect for MTL and a restrictive DTL should you want it. Though I enjoyed the 0.6Ω mesh coil, I’m pretty sure I will be buying the CCell 1.3Ω, but that’s just my preference and I will likely get some 0.6Ω when I feel like a change.

Originally I was going to put the assembly as a con, but I grew to actually like it. My only gripe there would be that Vaporesso didn’t supply a spare seal so it’s going to be a case of waiting to see what perishes first, the battery or the seal?

Despite my reservations about the lack of innovation, it just goes to show new isn’t always better and there’s always room to improve. Vaporesso have achieved this. That said, if I had the original Orca Solo then the upgrade would not have been worth it. As this was new to me, then I am very happy with it.

I could scrape up a few more minor cons but I’m treating this as an upgrade rather than a game changing innovation. It’s just a stick, it’s nothing new, it’s limited but most importantly IT WORKS and it works extremely well.

Don’t expect it to satisfy your shinyitis or be ground breaking, expect a superb MTL kit and you won’t be disappointed. 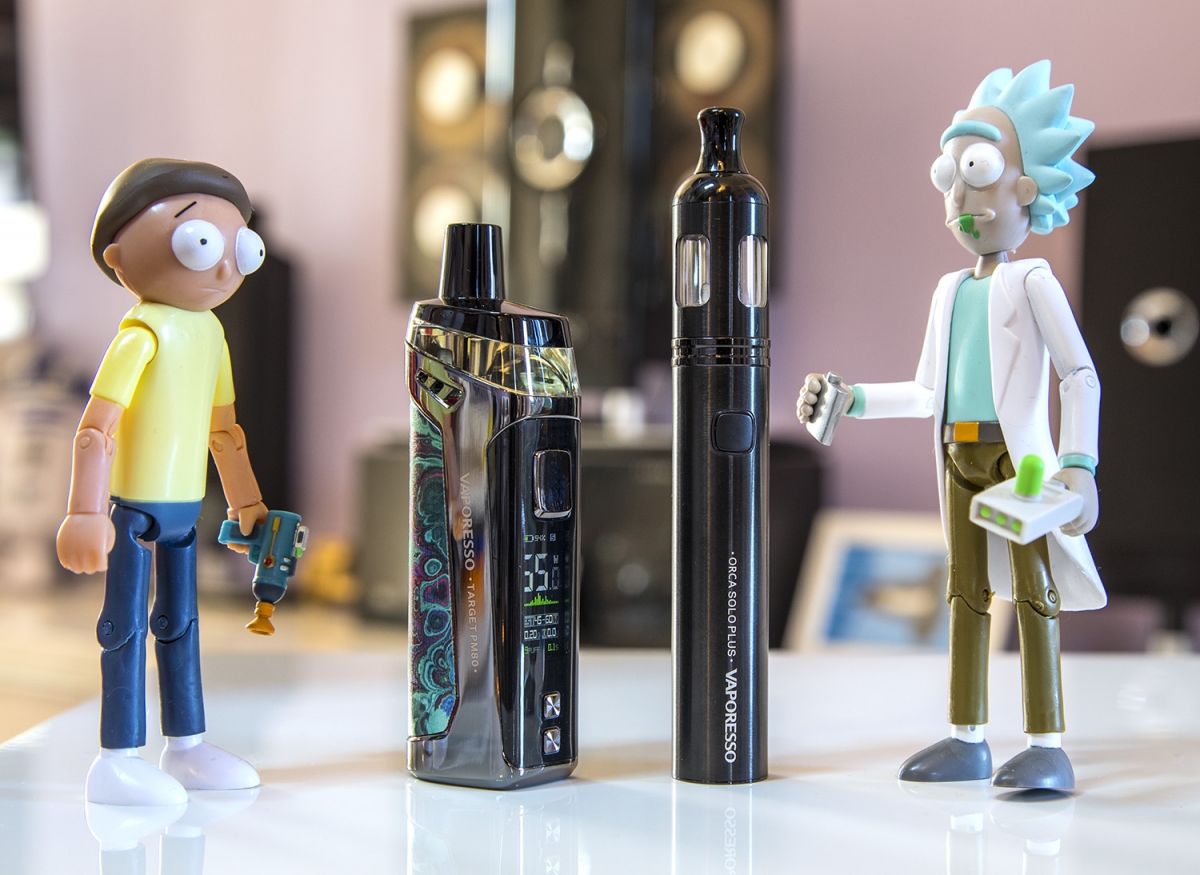