Today for review we have the XEO VOID Vaporizer which was kindly provided to me by V2 Cigs. They also supplied a couple of Vsavi Platinum e-liquids to try out too.

I hadn’t heard of XEO but they are a German company and this promises “German design and engineering at it’s best to give a great vaping experience”. The packaging is a nice solid cardboard box and when opened, it’s very neat but simple.

There’s the manual, micro USB charging cable, a 1.0ohm coil for MTL, a 0.6ohm coil for RDL and the device itself. 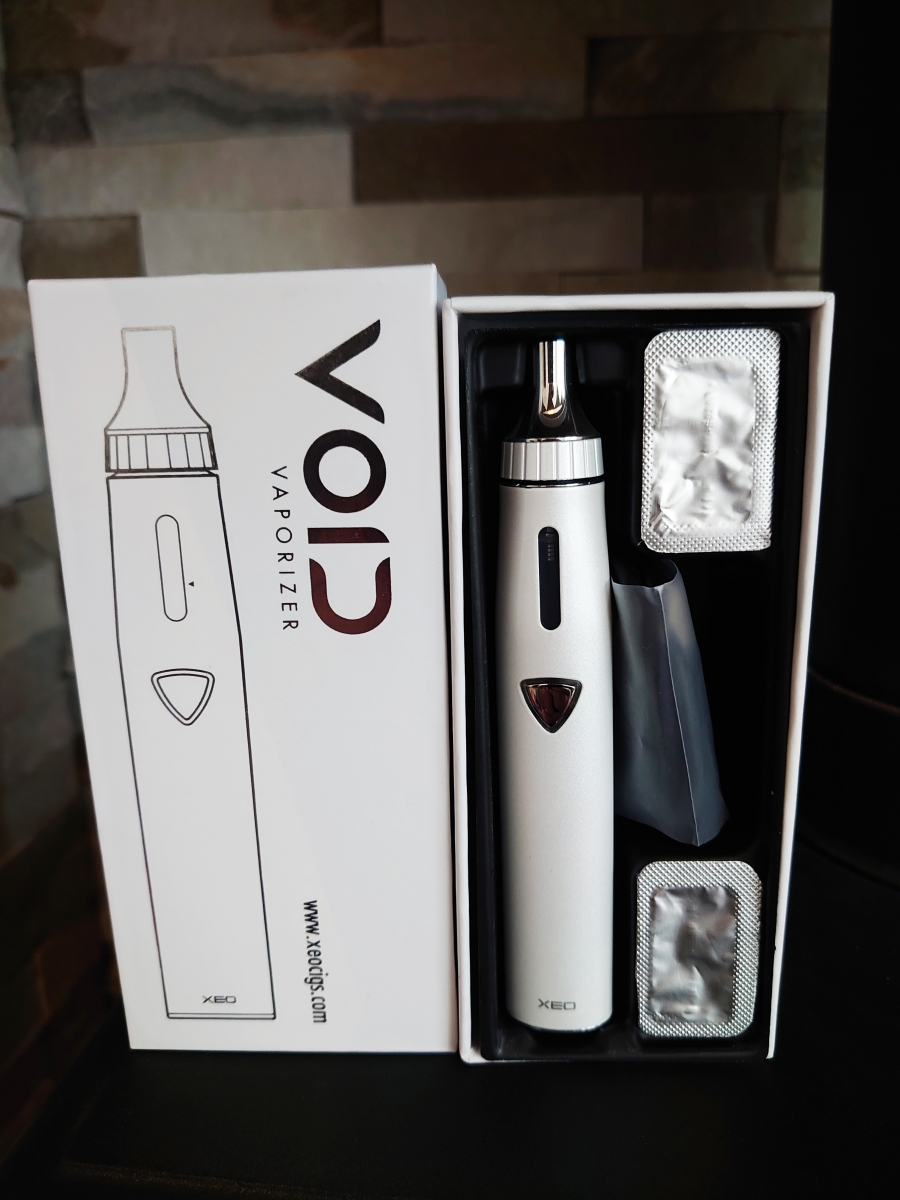 The device itself is 1500mAh with a 2ml capacity. It’s 12cm tall and has a diameter of 1.9cm. It comes in a variety of colours which are black, burst silver, gun metal grey, pink, chameleon and the one I was sent, white. It’s not actually round, it’s a rounded triangular shape which not only feels really nice in the hand but also means you can put it down on it’s side without fear of it rolling away.

I think this is one of the best looking vaping pens I’ve seen, it’s stunning. They have clearly thought about the way this looks. The clean edges, the shape of the button, the drip tip, it almost looks futuristic like it’s the vape choice of the cylons or something, especially when the fire button and tank glow Red when charging. It feels nice and sturdy, and it’s incredibly well made. It just oozes quality.

Where this differs from other vape style pens is the way that the tank and airflow are implemented. The tank is built in to the device itself to prevent any leaking, and the airflow is controlled by the knurled ring at the top which you turn to adjust. To fit the coil, you unscrew the top of the device and then the coil screws onto the bottom before you reinsert into the mod and then screw the whole thing on. There’s a little fill level indicator on one side to help prevent any overfilling from occuring and to stop liquid spilling out when you screw the top and coil back onto the device. The coil touches the little metal part at the bottom of the tank to create the circuit and thus is able to fire. 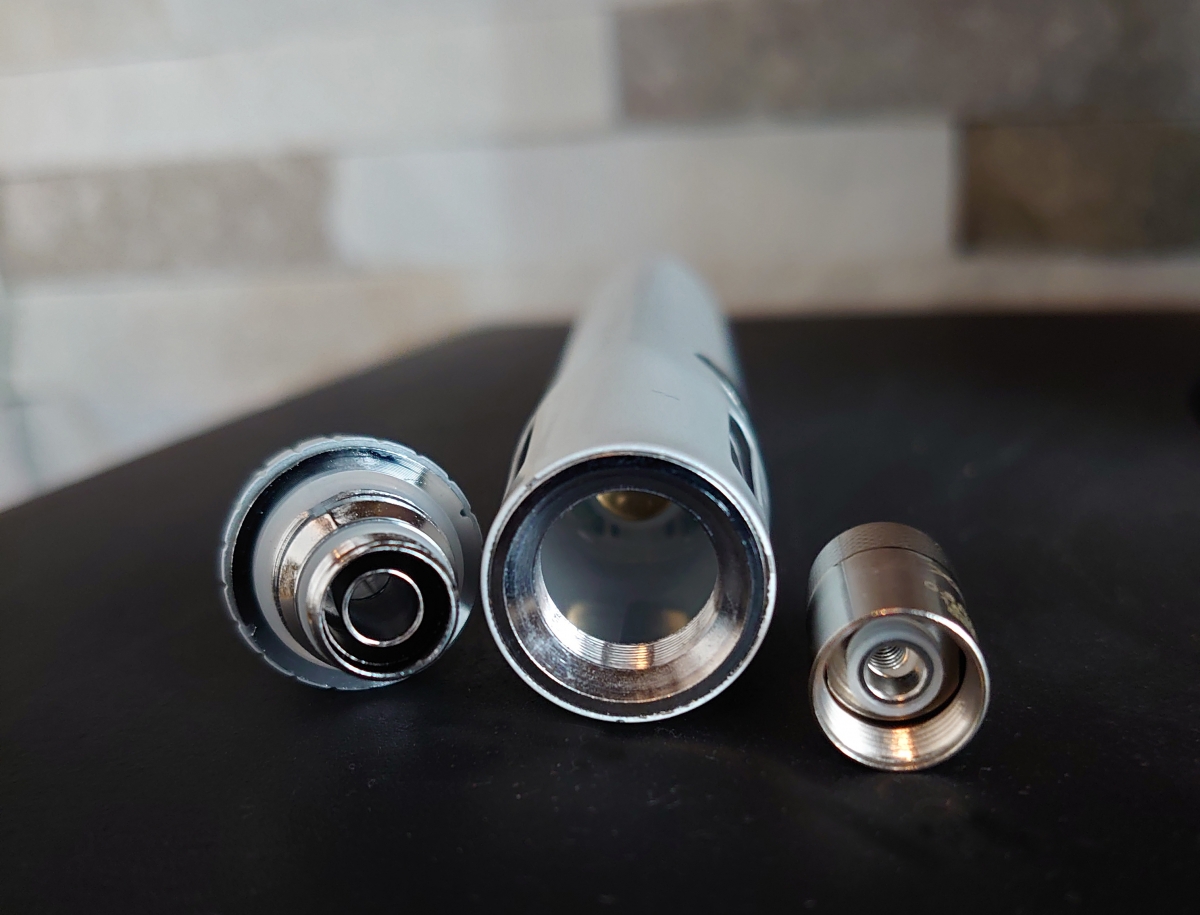 It’s all very clever and keeps the clean lines of the device, and I have had absolutely no leaking at all when using this which is a huge plus. It does raise some questions though, the main one being how you go about cleaning the tank? The tank is integrated into the device so you can’t remove it to clean the tank, and the micro USB port is exposed and there’s a battery vent hole on the bottom so you can’t run it under the tap or swish it around in soapy water as it would get into the body and ruin it.

There’s not much more to this kit. It’s simple to operate, click to fire, five clicks of the fire button to turn on and five off. The battery was enough to last me all day using both coils but took longer than it should to charge a 1500mAh battery due to the fact that it charges by micro USB, this really should be USB-C at this point in time. When you press the fire button and vape, the tank and fire button light up white. When you have vaped, it will continue to flash five times, how fast the flashes are denotes the battery level. It’s a bit distracting with all the flashing, and at times I was trying to work out whether Skynet was somehow trying to communicate with me.

Well now let’s get down to the actual vape eh, will it be XEO-lent or will it be one to aVOID? Even I thought that was groan worthy word play! 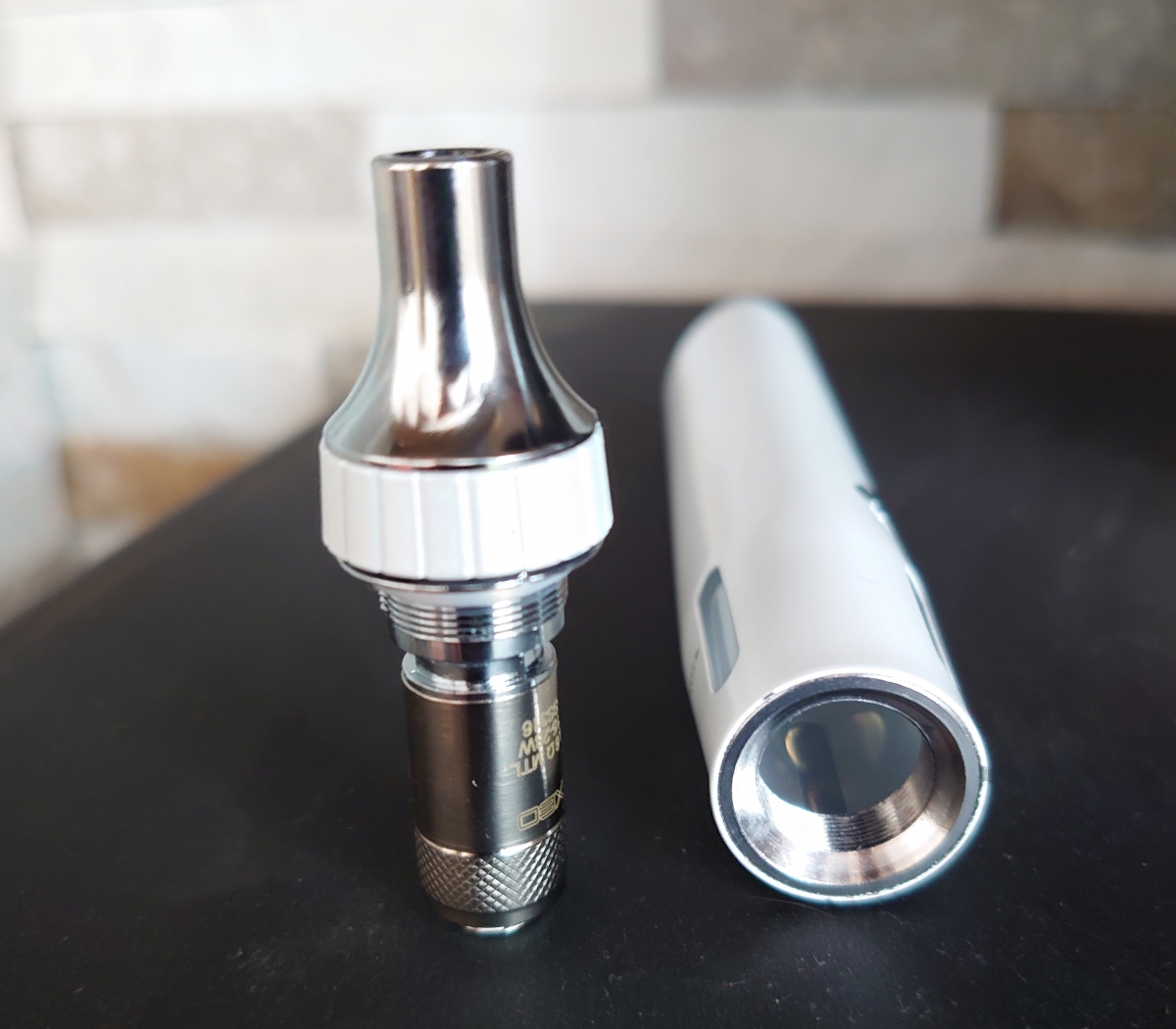 On the coil itself is printed the wattage range 15W–28W but as you can’t adjust the wattage on this device, I have no idea at what level it is firing. Filled and primed with my usual Unicorn Shake, I set about vaping. This is definitely restricted direct lung for sure, it’s a pretty tight draw bordering on too tight. I don’t mind it personally, but some may find there’s not enough air getting through. To adjust the airflow, you turn the ring at the top clockwise to loosen the airflow and anti-clockwise to tighten the airflow which to me seems the wrong way round. Surely clockwise to tighten would have made more sense? In the end it didn’t really matter anyway as you have no way of telling how open or closed the airflow is and, if I’m entirely honest, it didn’t seem to make any difference at all. I turned the ring round and round in both directions and couldn’t really tell what difference it was making. Vapour production is decent, as is the throat hit, but the flavour just isn’t there. There’s not much flavour coming through at all. I’ve tried a few different liquids that I normally use and all end up muted. The drip tip has to be mentioned here, although it can be removed as it’s a standard 510, it’s difficult to find one that actually fits and looks right with the device. The drip tip is really nice to vape from and has a plastic spiral inside to stop spit-back, but if you chain vape this coil in any way, it gets way too hot to the point where I nearly burnt my lips on a number of occasions.
Using the RDL coil I was just about able to make it through a full day vaping, and the coil itself lasted me about a week.

On this coil is printed the wattage range 10W-25W. Again I’m not sure why if you can’t adjust the wattage, but primed and ready with my favourite MTL liquid and off I went. Straight away it's obvious that this is just too loose for me, it’s really loose. It’s such a shame because the flavour is actually pretty good using this coil. I can’t actually tell the difference in airflow between the two coils so it ends up being a tight RDL and just too loose for MTL. I tried turning the airflow control ring round one way and the other, and again it seemed to make no difference at all. The battery was more than enough to last me through the day with this coil, and the coil lasted me roughly a week. 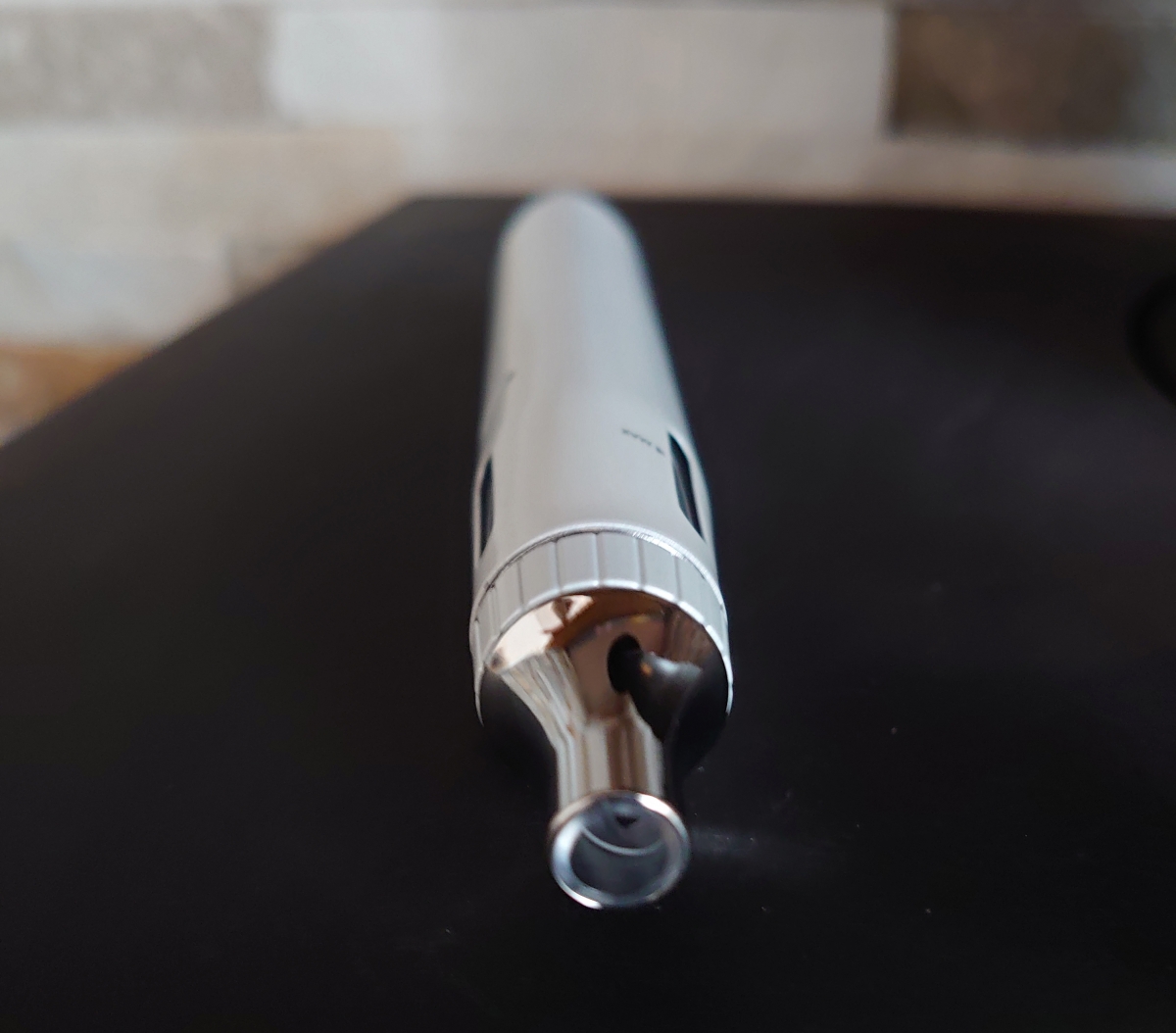 V2 also kindly provided me with two e-liquids from the Vsavi Platinum range to try – Menthol and Cherry.
The ones sent to me were both 6mg but I could not find a VG/PG ratio anywhere, not even on their website.

They come in the standard e-liquid box which we are all familiar with, and the bottles themselves are wrapped in a thin plastic sheet which seems a bit of a waste to me. When you unscrew the top cap of the bottle, you’ll notice the thin extended nozzle here which means that no matter how small the fill port on your tank/device, this will fit in it well, and the bottles themselves are really soft and easy to squeeze. They’ve clearly thought about the bottle design and they work really well which is a nice touch. Of course looks are all well and good but it’s what’s on the inside that counts, or so I keep being told. How do they taste though? You’d have to be menthol not to find out….. 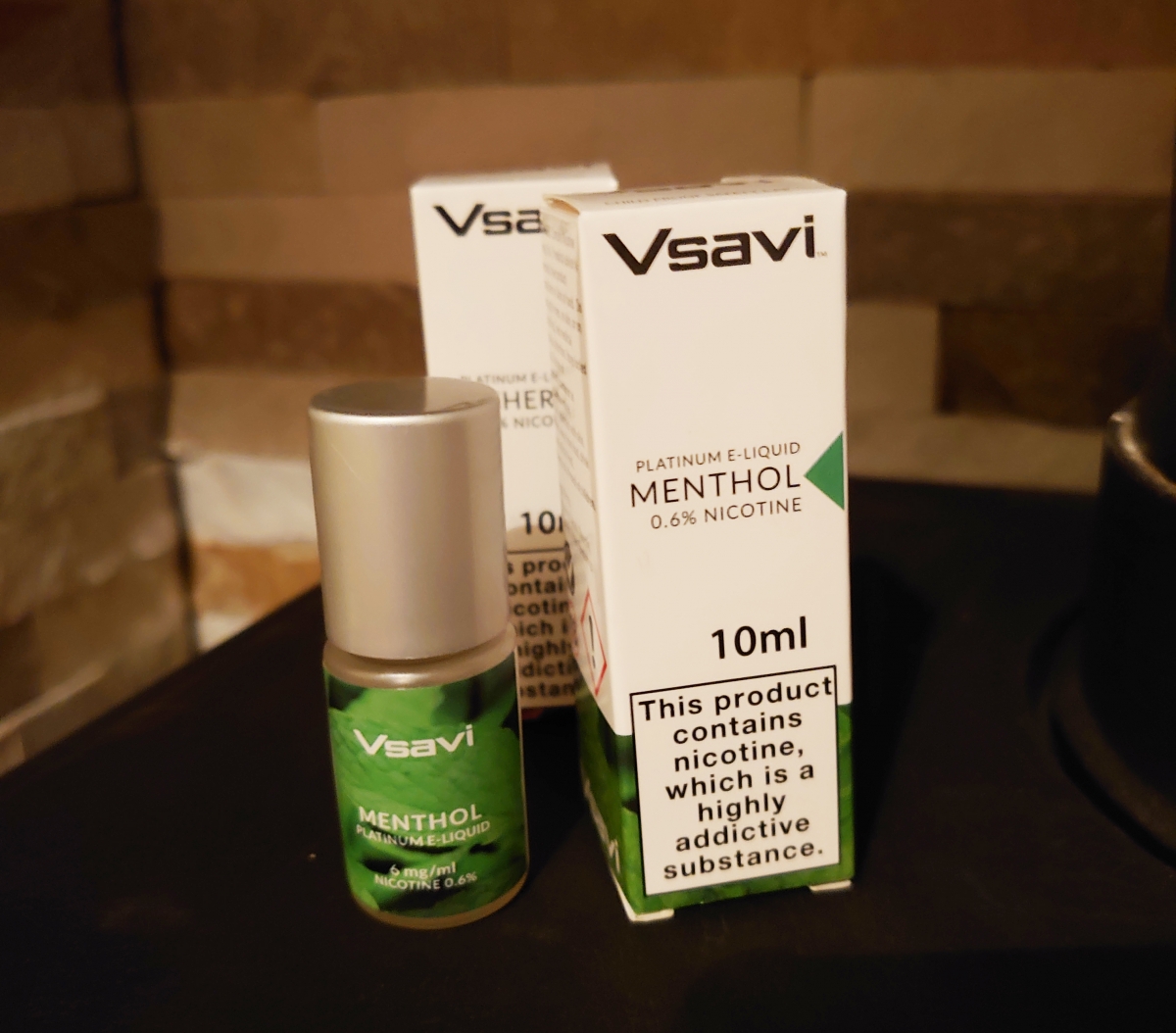 I’ve tried A LOT of menthol liquids in my time vaping and it seems to have become something that liquid manufacturers put on a bottle when they just mean lots of cooling agent or a hint of something minty then an overload of ice. I approached this one with a certain amount of caution and expected another disappointment. I take it all back, they have absolutely nailed it with this one. On the inhale, there’s a lovely actual menthol taste which is really smooth and is refreshing rather than feeling like a penguin is trying to jump down your throat. On the exhale even more of the menthol comes through, and it almost turns sweet but it’s never too sweet and you’re left with a mouth that feels clean, crisp and refreshed. So satisfying to have a very good menthol that is what it says it is, and one of the absolute best menthols I have tried. I will definitely be buying more of this one. 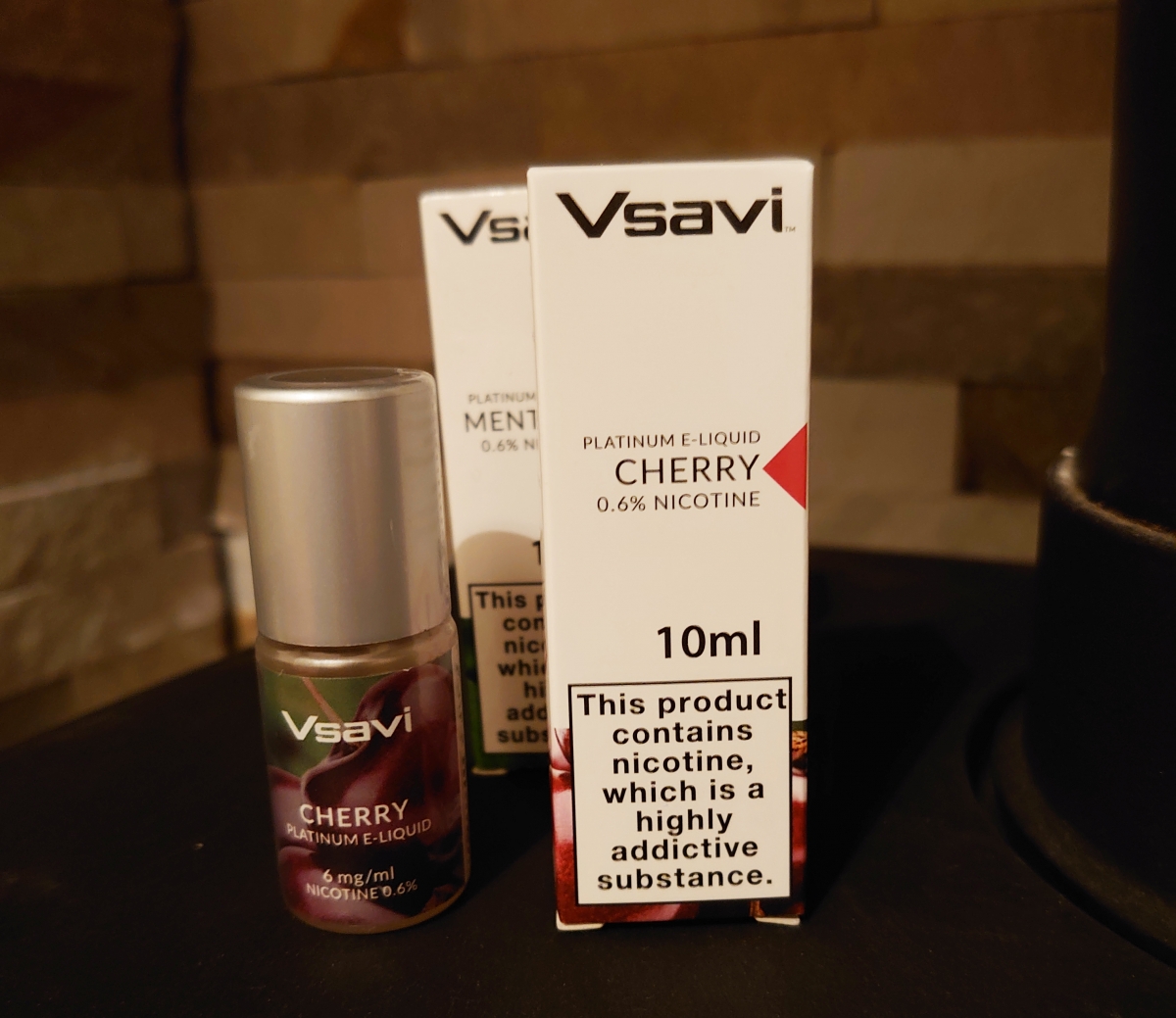 Cherry is a flavour I return to again and again, there are lots of them but few very good ones. Most cherry liquids end up tasting metallic, are way too sweet, or just aren’t juicy enough. On the inhale, there’s a subtle, juicy, complex almost dark cherry flavour and on the exhale it swerves towards sweet but is never too sweet. You’re left with a juicy mouth feel which tempts you into taking another vape, it’s very moreish indeed. This is a good liquid as it is but I feel like it’s almost just a hint too subtle and that just upping the flavour a small amount would make this outstanding.

I so wanted to love this XEO VOID as, to me, it’s a great design. It’s a lovely looking kit for a pen style vape. It doesn’t leak, it’s easy to use, it fires straight away, and it’s lovely to hold and easy to carry. The MTL vape shows promise as there is good flavour there, but the draw needs to be tighter. By trying to appeal to RDL and MTL vapers with the same device, they have failed to nail either. It’s a common mistake that hardware manufacturers continue to make. The integrated tank seems like a good idea and makes this device leak-proof, but I can’t see how you give it a thorough clean. The airflow is a nice idea but it really doesn’t do anything. The drip tip is comfortable but gets too hot when RDL vaping. There’s also no getting away from the fact that Micro-USB just doesn’t cut it anymore, this really has to be USB-C. It feels like functionality has been sacrificed in the name of design, it’s a bit like designing K.I.T.T. then putting a standard 1 litre engine in it and having it voiced by a Speak ‘N’ Spell, it will work and it will go but it just doesn’t do it’s design justice. 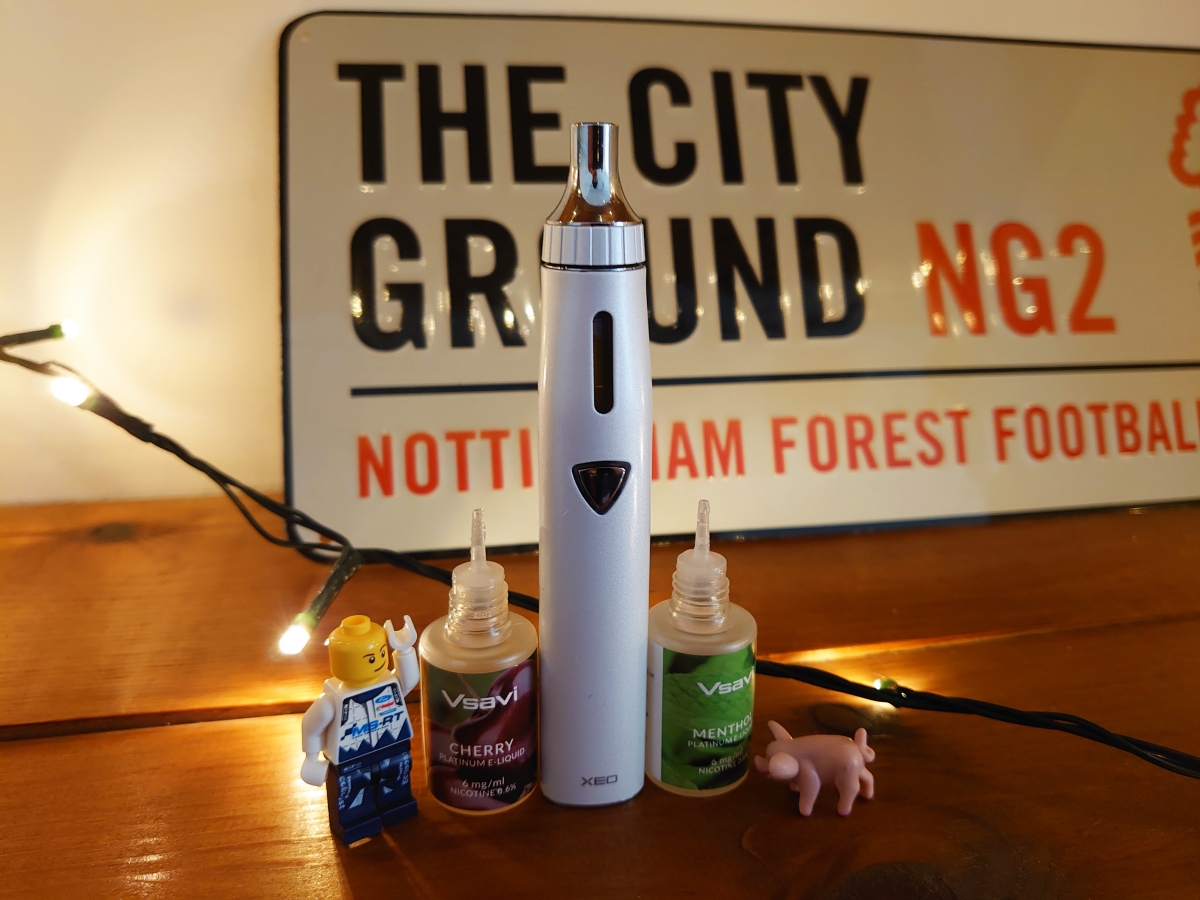