Sourcemore have sent out a couple of the latest offerings from Wotofo for me to try out. Today I’m taking a look at the Wotofo Troll X RTA, and I have to say I’ve been looking forward to this as one of my favourite dual coil RTAs of days gone by was the original Troll rta so I’m rather hoping it lives up to its namesake.

This comes in typical Wotofo packaging, and I’m happy to see they’re finally putting finger cutouts in those clear plastic lids which makes opening the box much easier (previous Wotofo boxes of this nature were notorious for welding themselves to the cardboard underneath!). The Troll X is available in six colours and Sourcemore sent out the blue version for review which is one of the colour options I would have chosen for myself. 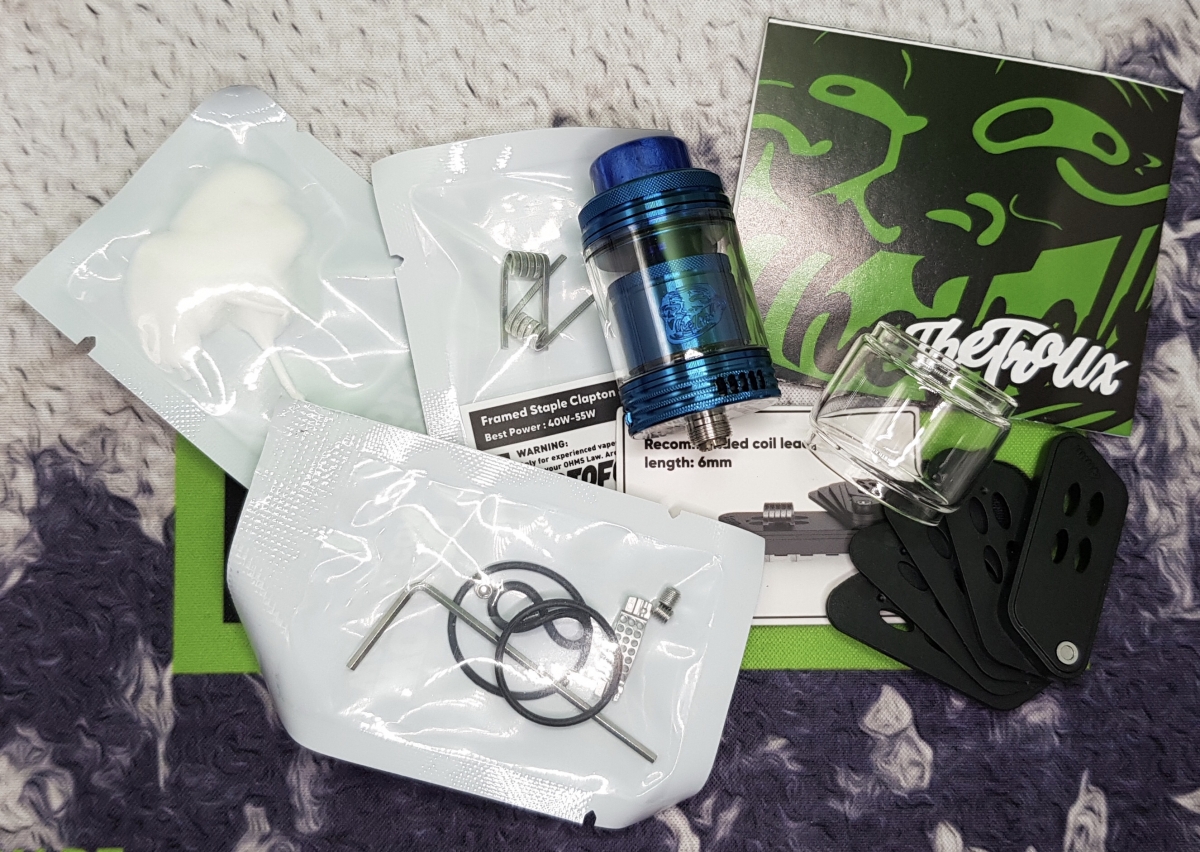 As is typical for a Wotofo RTA, there’s plenty of extras included in the box including some premade clapton coils plus cotton, spare parts, a bubble glass, and Wotofo’s excellent coil measuring tool. 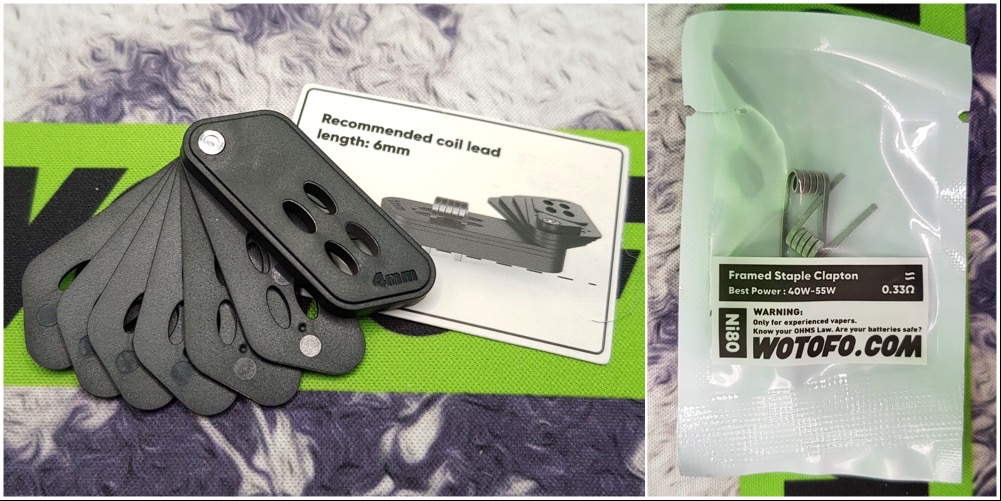 Sadly the included coils are once again Ni80 so I can’t use them due to my nickel sensitivity. The coil measuring tool is excellent though and makes a great item to pack in your kit if you’re going away for a few days thanks to its compact design. There’s even a card included suggesting the optimal leg length to cut your coils at as well. 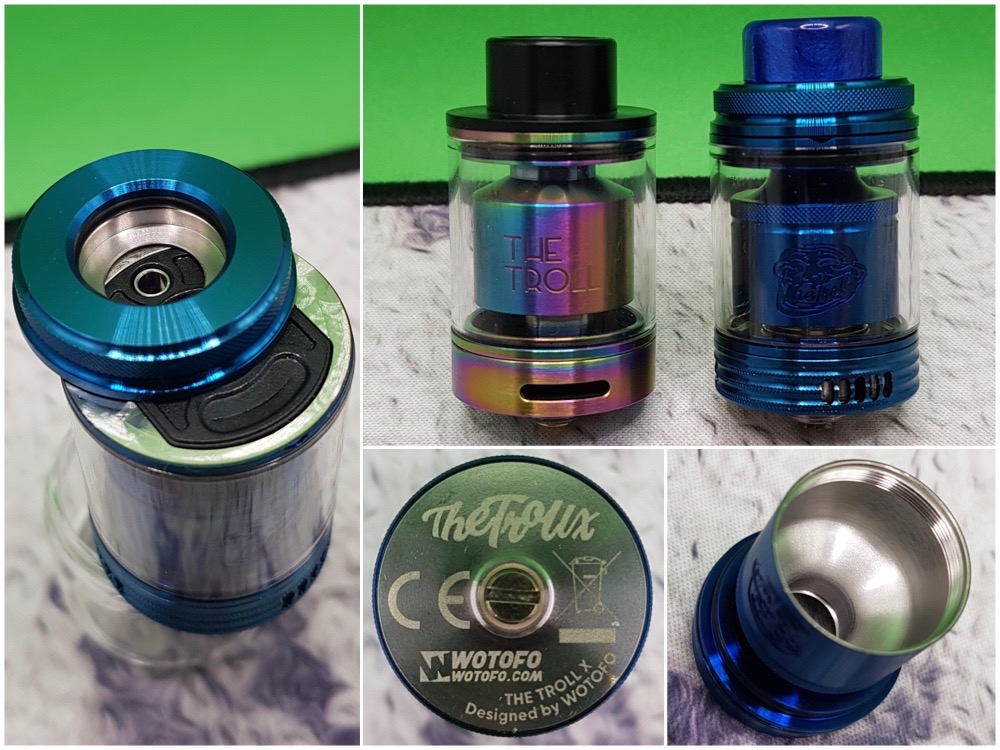 Sitting the Troll X next to the original Troll, you can clearly see the family resemblance although much has clearly changed. The top is now a push to fill design with a standard 810 drip tip, and there are now three airflow slots instead of two. I think I like the understated text logo on the original bell rather than the troll logo as well, but again this design harks back to the earlier troll RDAs. The bell is nicely domed inside though. The 510 pin on the base protrudes perfectly with German peek insulators used throughout so I’d say this is a mech safe design.

The single fill port on the top is quite narrow and I’ve found it easier to remove the drip tip whilst filling to avoid things getting backed up and making a mess. There’s a teeny bit of side to side play in the top cap, but there’s little danger of it accidentally coming open in your pocket, and the whole top assembly can be unscrewed and dismantled for deep cleaning as well. I found the included drip tip, nice as it is, felt a little too small so I swapped it out for one of my own which is the same height but a couple of millimeters wider and this felt much more comfortable in use. 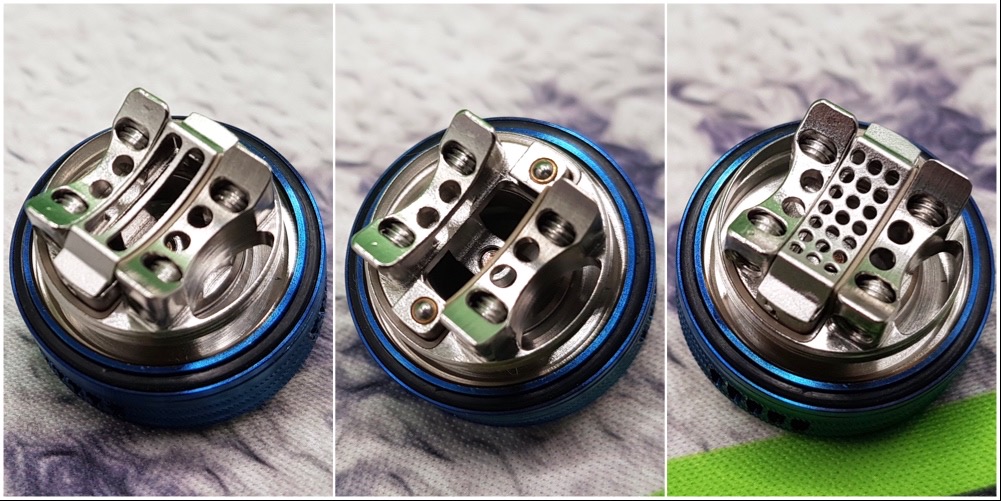 This brings on to the all important build deck which has a postless design, the grub screws come in from the sides so you’ll have no issues installing complex coils here. The party piece of the new deck is the removable airflow section, it comes with a large two slot design fitted but this can be removed and swapped out for the included honeycomb airflow. This can even be swapped over with your build in place (it's a bit tricky though), and the airflow pieces are held firmly in place by two spring loaded ball bearings on the deck so I’d have little worry about these pieces moving in use. The wick ports are very large as well so there should be no worries on that front either. 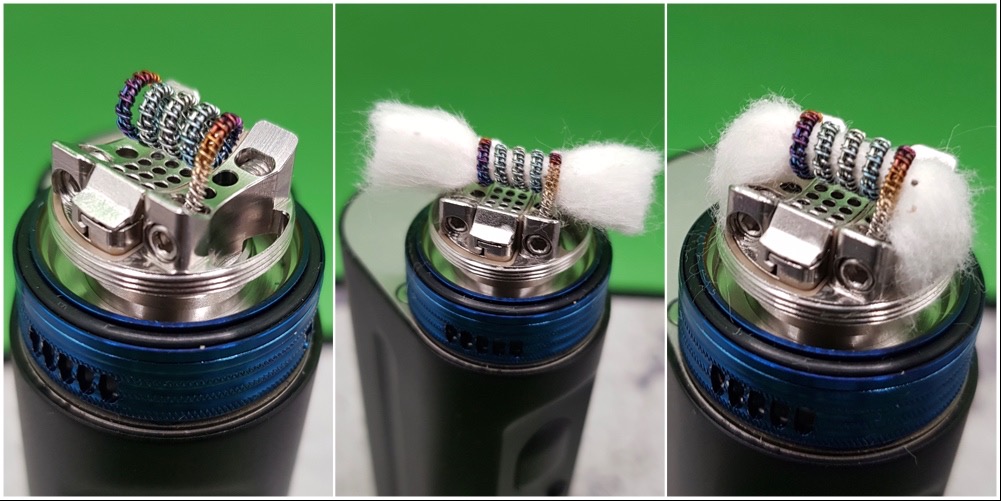 One thing you can do on the Troll X that wasn’t possible on the original is a single coil build, so I thought I’d start there. For this the suggested 6mm leg length seemed a little too long so I cut this down to 5mm which seemed much better. Even using the bulky pre-made coilology wire, installation was a breeze. I instantly remembered why I don’t use this wire as it ohmed out stupidly low at 0.15ohms on a 2.5mm inner diameter build. For wicking, I cut just outside the base as the wick ports are quite low down and you’re going to be relying on capillary action here, and there was just about enough wick to fill up the ports.

This was superb at 80W with three out of the five airflow slots open, with bags of flavour and smooth airflow especially with the honeycomb airflow option fitted. Unfortunately this tended to be a bit weepy, including a couple of major tank dumps until I’d fettled the cotton a little, and a 3mm coil would probably be better here to fill those large wick ports along with cutting the wick a few millimeters further out. This is certainly worth trying again in the future but with a slightly less silly coil. 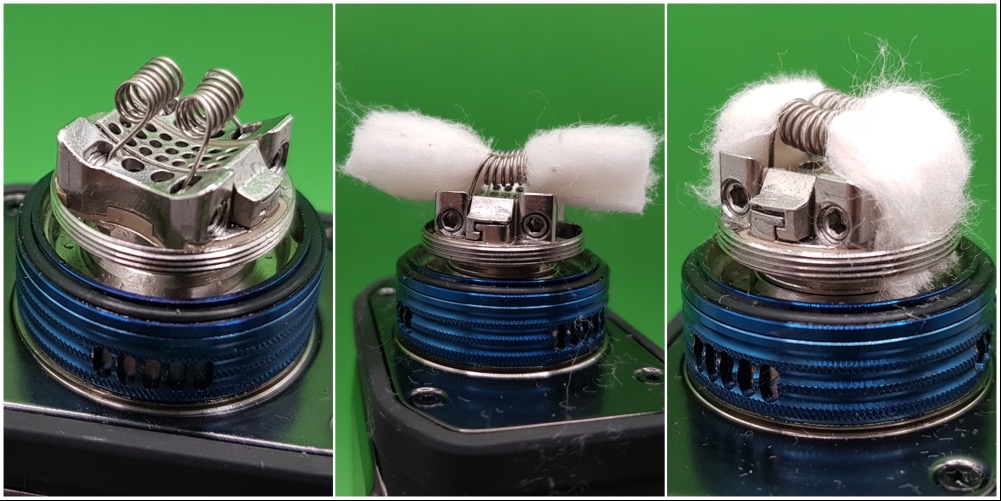 Next for all the round wire build lovers out there I did a simple dual coil Kanthal build to make sure there are no issues with that. Straight off the bat it was obvious this deck is really designed with larger complex coils in mind and I had to space the coils to get them to fit but at least the suggested 6mm leg length seemed about right this time and I had no issues capturing the legs.

With my experience on the single coil build, I cut the wicks a few millimeters beyond the base this time and fluffed the wicks out a bit more to accommodate the extra wicking material in the ports. This seemed to do the trick as I had absolutely zero leaking this time around and the wicking was able to keep up a treat.

This KA1 build came out to 0.4ohms and gave a surprisingly good vape at 70W. I’m beginning to see why some people stick to these super simple builds! 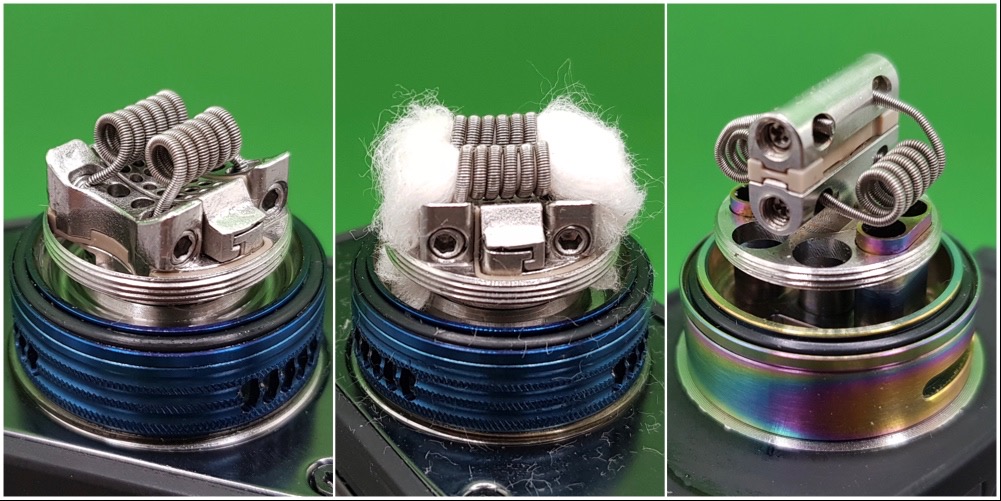 Finally I went for the classic fused clapton build and as I was making the coils myself, I decided to make an extra set and try the same build in the original Troll for comparison. This led to an ample amount of swearing as I’ve gotten lazy recently and found that I’m a bit rusty when it comes to building claptons!

Both sets of coils installed came out to roughly the same ohms as you might expect and installation on the Troll X was a whole lot easier, as was the wicking. Once I’d got them installed on mods at around 90 to 95 watts though, the Troll X pulled away quite convincingly with much sharper, more defined flavour across the board. The original isn’t terrible by any stretch of the imagination, but the Troll X simply leaves it for dust in this direct comparison.

The Wotofo Troll X RTA is a worthy addition to the Troll legacy and in my side by side comparison with the original, it really makes you appreciate the advances in deck design and airflow that have taken place in the intervening years. The ability to also run this RTA as a surprisingly capable single coiler, especially when using the honeycomb airflow options, is an added bonus. I wish that they’d retained the original screw top fill system as this is the one area where the original is better, but you can’t have everything, and this is one RTA you should consider.

Many thanks to Sourcemore for sending the Wotofo Troll X RTA out for review. 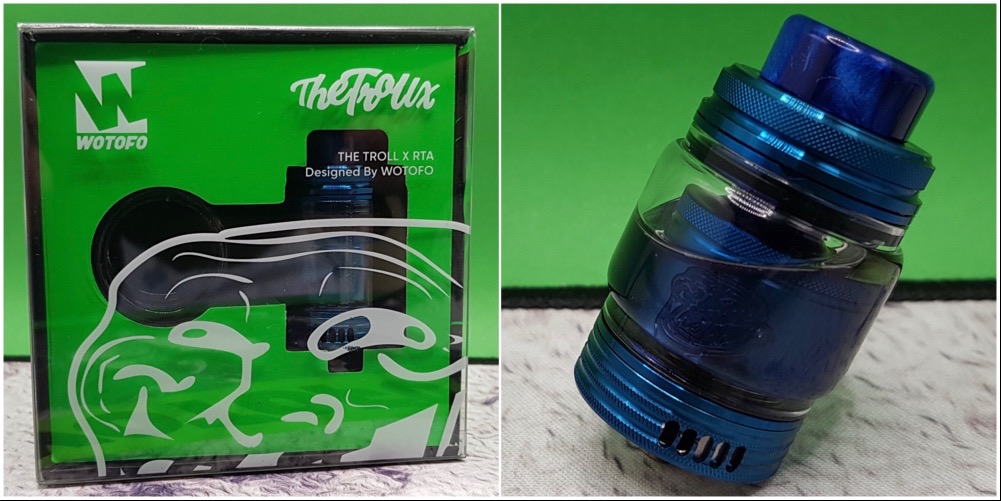