Our friends over at Sourcemore have kindly sent out the Kylin Mini II RTA from Vandy Vape for review. I’m a big fan of the original Kylin Mini RTA, despite it’s finickity wicking issues and wandering o-rings, and as this is now discontinued, I wanted to take a look at its successor.

The Kylin Mini II comes in a simple cardboard box with a list of contents on the back and a scratch ‘n’ sniff code along with the colour choice on one side. I was sent the gold version to review which wouldn’t have been my first choice, but it is available in six different colours so you should be able to find one to suit your tastes. Inside you’ll find the Kylin Mini II itself with a bubble glass pre installed along with a straight glass, coil measuring tool, manual, spares bag and a prebuilt coil. 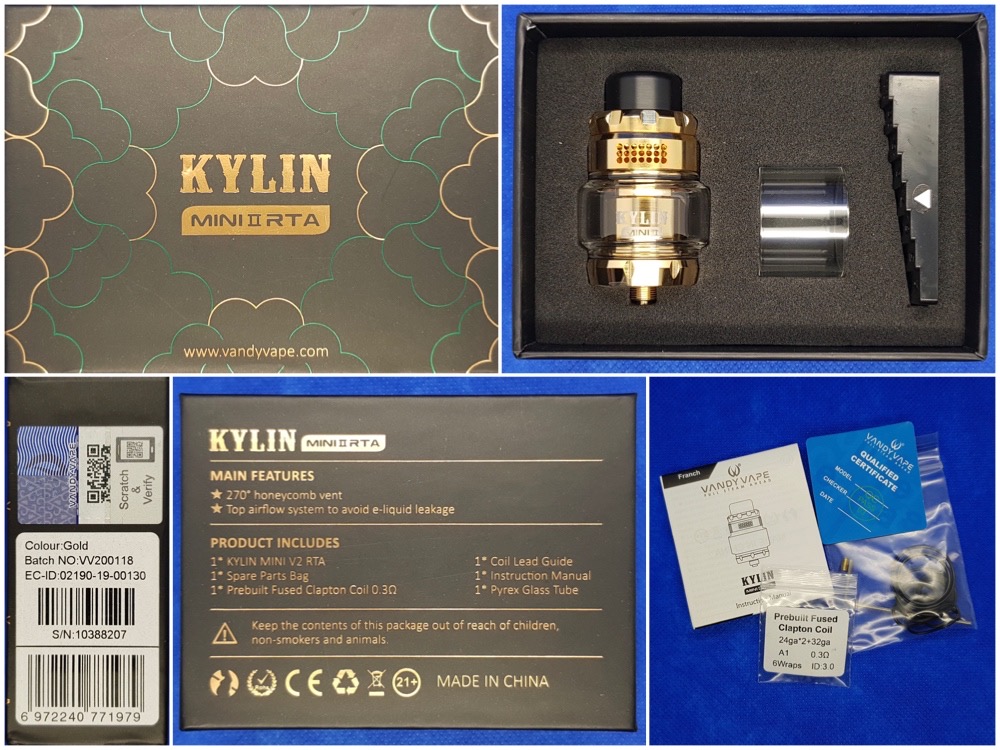 The Kylin Mini II shares more in common with the Kylin M(esh) than original Kylin Mini as it is now a top airflow atomiser. As you can see from the picture, it breaks down into quite a few parts which aid in cleaning, but even so it’s still straightforward to strip down and rebuild.

There’s an adjustable airflow ring with twenty one air flow holes, and behind this the air inlets are sharply angled downwards to go down the side of the build deck and surround the coil with a 270 degree honeycomb airflow. As this is now a top airflow atomiser, the Kylin Mini II should be fairly leak resistant unlike its predecessor which would quite happily dump a full tank of eliquid on you if you didn’t get the wicking right!

The build deck itself has plenty of space available for fairly complex builds, and it’s definitely nice to see that the grub screws have been moved to the sides which means it’s much easier to get your coil installed this time around without distorting the coil which was an issue on the original Kylin Mini. The build deck rotates but is stiff enough that it doesn’t spin freely when you're installing coils or wicking so this hasn’t been an issue, but the post holes are fairly far apart so you may need to space smaller builds and, due to the post holes orientation, your coils will need to be wrapped anti-clockwise (most pre built coils are wrapped this way). Vandy Vape also suggests pre cutting your coil legs at 7mm with the included tool to aid in installing due to the postless deck design. 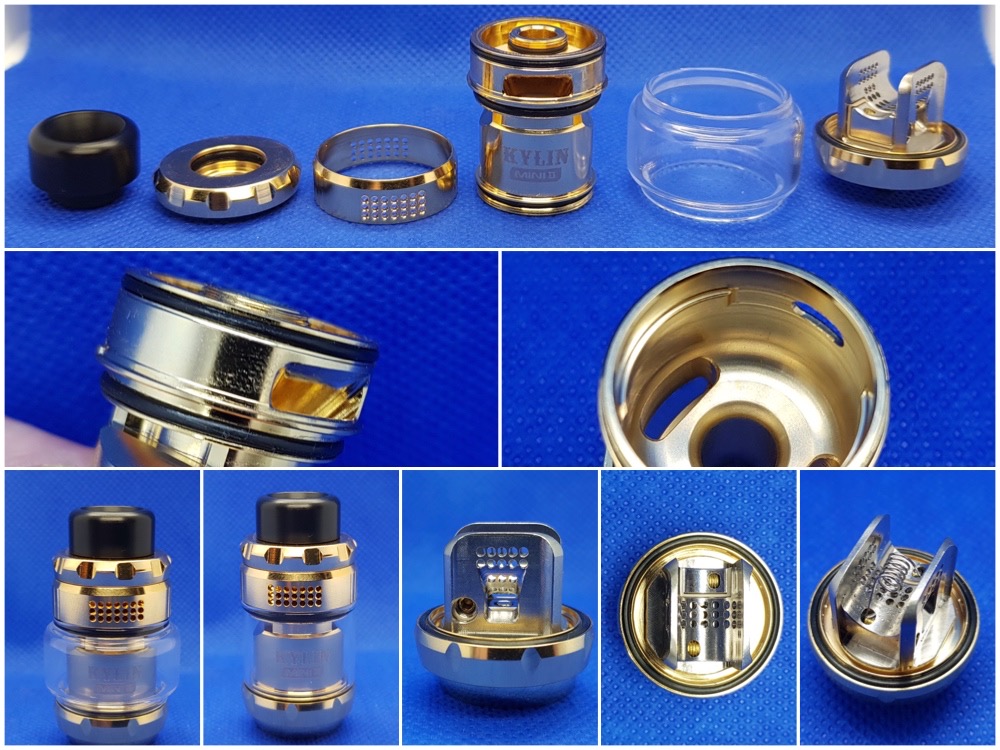 Two glasses are included, a 3ml straight glass and a 5ml bubble glass. I opted to use the larger bubble glass for the extra capacity. The top cap is easy to remove and reveals two generous sized fill holes and it has an 810 drip tip catch cup with o-ring so your favourite 810 drip tips should work just fine in here. The 510 pin does protrude a bit, but I’m not sure I’d entirely trust this design on a mech with that rotating deck design.

For my first build I thought I’d try a simple round wire build to check if this was possible and also because I know plenty of people still use this type of coil. Because the post holes were so far apart, I needed to space the coil, but there were absolutely no issues capturing the legs in the postless deck once I’d cut them to the suggested 7mm. This build came out to 0.45Ohms and it gave me a fairly respectable and flavourful vape at 35 to 40 watts with just nine holes open on the top airflow.

Next up was the included kanthal fused clapton. This has two 24 gauge cores with a 32 gauge wrap and a 3mm inner diameter, and came out to 0.32Ohms. This was super easy to install and, despite the chunky coil, there was still ample space in the deck to slightly space the coil. This needed much more power, around 60 watts, and although I was still getting a decent vape, the airflow felt quite restricted and this felt more like it was coming from the deck rather than the top airflow.

Lesson learned, I put a smaller 2.5mm inner diameter staple clapton from coilology in instead and tried dropping the coil a fraction by trimming the legs at 6.5mm. This seemed much better, the airflow seemed alot more open, albeit with a bit of restriction still, and the flavour was much better.

Wicking is easy, simply cut the wicks to the edge of the deck, fluff them out and then install in the wicking channels using some e liquid to keep things in place. It seems much more forgiving than the Kylin Mini which needed virtual perfection every time to avoid dry hits or a leaky tank (trust me I’ve done both!), so this is a big improvement. 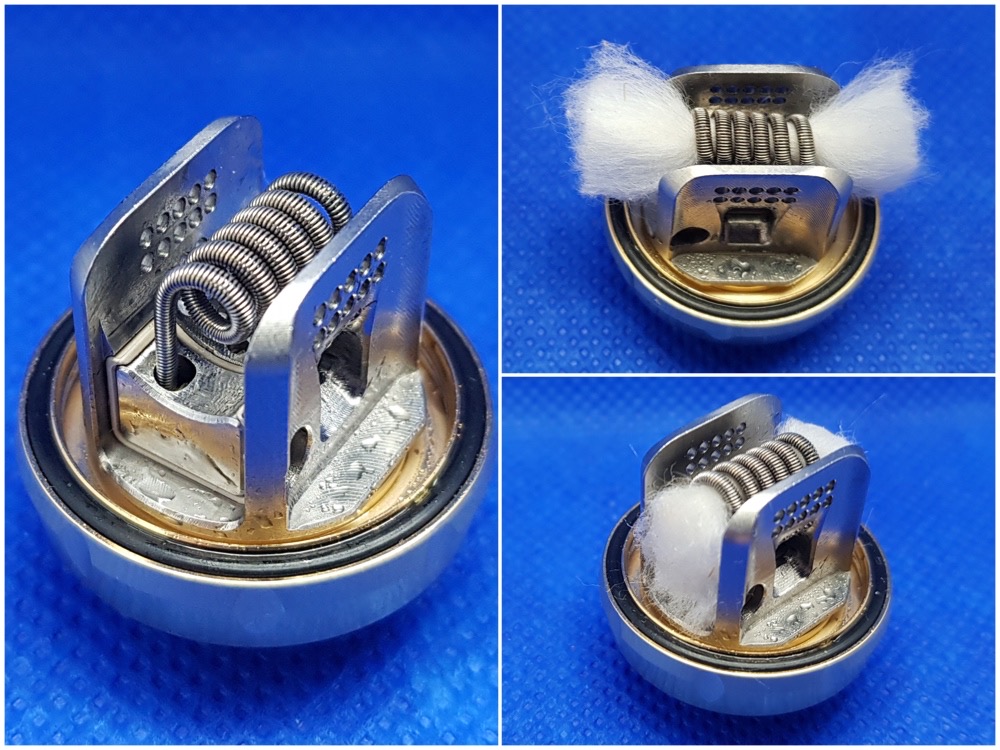 I’ve been suitably impressed with the Kylin Mini II RTA as there are a lot of improvements over the original Kylin Mini. Installing coils and wicking are much easier this time around and it is definitely more forgiving for the novice builder. The deck favours complex builds but be careful not to restrict the airflow too much. I’d suggest 2.5mm inner diameter coils work better here from my own experience. Whilst the flavour is good, I would say it’s perhaps not quite as good as the original, and it definitely seems to favour fruity flavours over custards and bakery type e liquids. 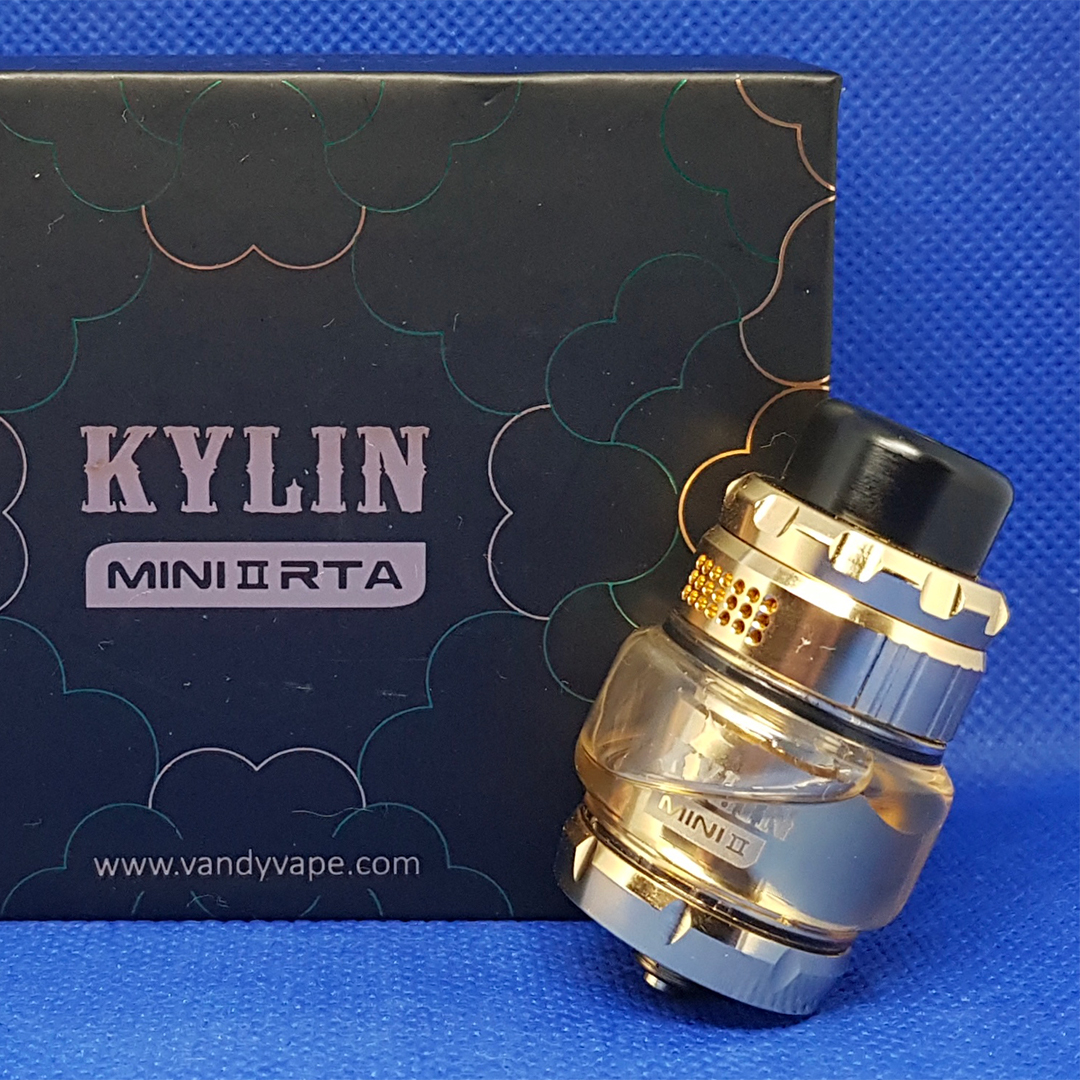