Alongside the Symba RDA, which I reviewed recently, Univapo also sent out their first sub ohm stock coil tank, the UA25, for us to take an early look at.

Inside the box there’s the UA25 tank itself, two coils (one preinstalled), along with a spare glass and o-rings. 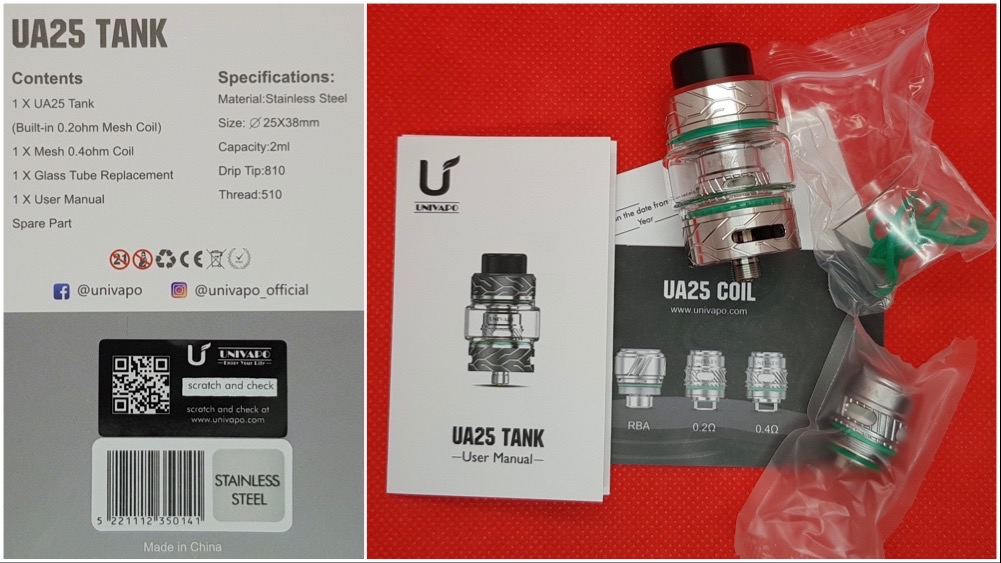 The UA25 is certainly good looking for a sub ohm tank, there’s only so much you can do to make a stock coiler like this stand out from the crowd after all. The top fill and bottom airflow adjustment both have an attractive design milled into the surface which Univapo are calling a “textured airflow control system”. Mine came in a polished stainless steel finish, and five other colours are available if this isn’t to your taste.

Univapo only state a 2ml capacity for the UA25 but I believe this is with the spare straight glass installed and not with the bubble glass which was fitted out of the box which I’d estimate to be more like the 3.5 to 4ml range (sorry I don’t have any syringes to check!)

The UA25 has a childproof top fill section. Look closely around the top of the tank and you’ll spy “on” and “off” in teeny tiny lettering. Turning the top left until the hard stop position will put it in the “off” position where it is now impossible to open, this of course has the added benefit of ensuring that the top can’t accidentally open in pockets either. If you now turn the top right to the “on” position, you are able to lift the top up and then slide it over to reveal a decent sized fill port and a pressure relief hole. The top assembly is quite large, but I was still able to use a 120ml gorilla bottle here. One criticism I would have here is that the “on/off” labels aren’t all that visible, and on several occasions I found it difficult to determine where the “on” position was to push the top cap open. A clearer indication would have helped here, but this really is a minor niggle. There’s also a tiny bit of excess play in the top as well, but this is probably down to this being a pre-production run sample, and overall this is possibly one of the best child proof systems I’ve seen.

The airflow control has two massive cyclops style openings and, as is common in most modern stock coilers, there’s more air available than you’ll ever need. This has click stops in six positions which feels solid, requiring a little effort to turn without being too difficult even on a mod, and the textured engravings definitely help out here. 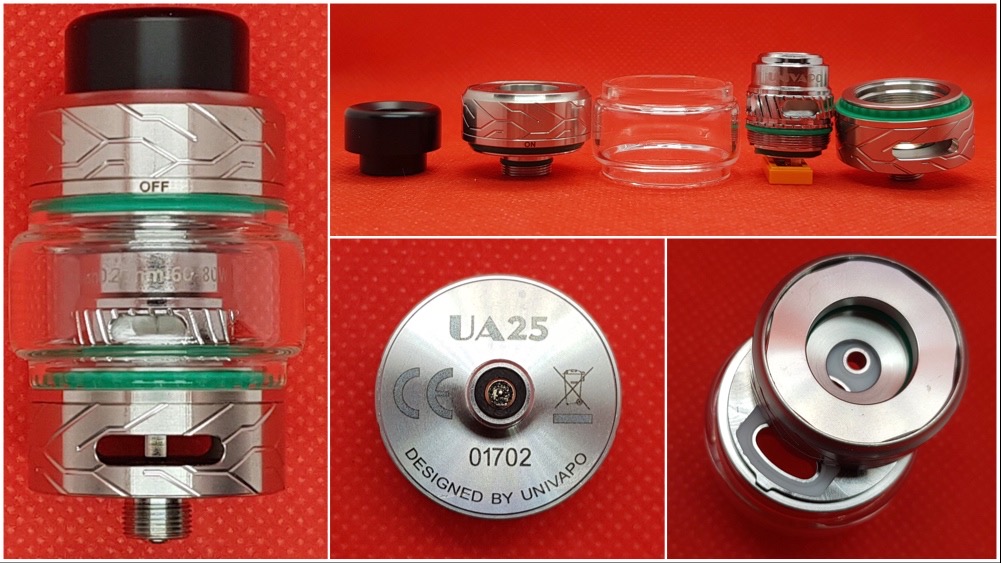 Two coils are included, a 0.2Ohm rated between 60 and 80 watts and a 0.4Ohm coil rated between 30 to 40 watts. These are both dual coil mesh affairs. Once again, coil material isn’t mentioned but Univapo were kind enough to let me know that they are both nichrome, so those of you with nickel sensitivity may want to pass over this one or look at the optional rba coil.

Superior food grade hydrophilic NWF (Non-woven fabric) has been used in an effort to prevent leaking. This wasn’t my first impression though as it dumped half a tank of liquid in my jacket pocket. This turned out to be a user error on my part though as I hadn’t tightened everything down properly, and once I’d done that it’s been leak free ever since.

Both coils performed well in the stated ranges and perhaps even a little beyond this, particularly with the 0.4Ohm coil which I felt worked best in the 40 to 45 watt range. They both gave great flavour, but I felt the 0.2Ohm coil just pipped it for me. At 75 watts with the airflow about half open, it was a really pleasurable semi-restricted lung hit which I love. 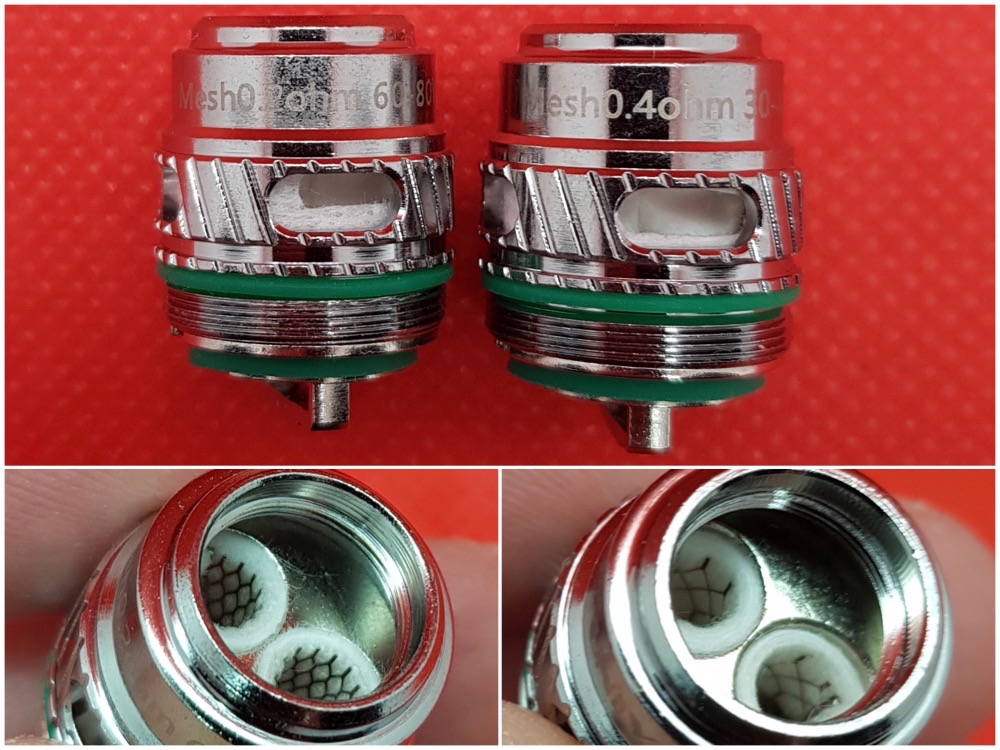 Univapo have been one of the best newcomers to the scene this year, and the UA25 is another solid entry in their lineup. I’ve thoroughly enjoyed using this and I very much look forward to seeing what they have lined up for 2021. 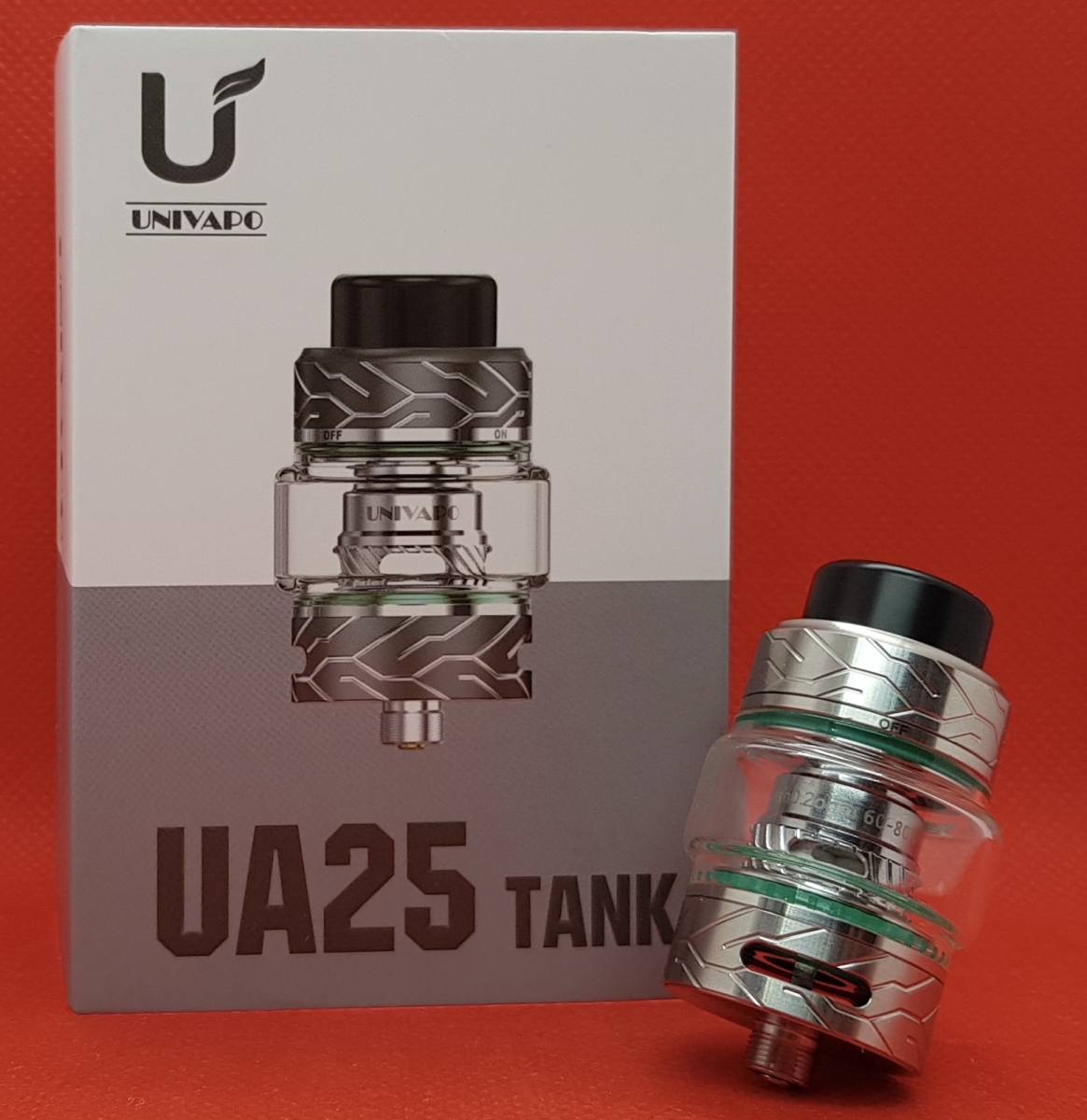