Univapo has sent out the next entry in their lineup, the Symba RDA. So can they make the transition from pod manufacturer to the hobbyist side of the market on their first attempt? 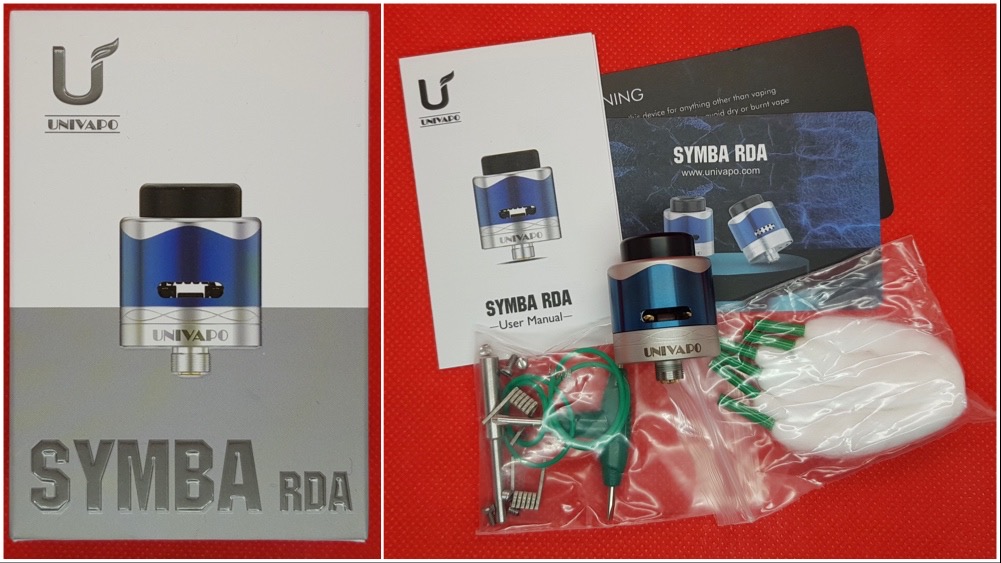 The Symba RDA is available in blue, gunmetal and rainbow, with a striking wave in the top cap design. I went for the blue one for the review.

There’s quite a lot included in the box besides the Symba RDA itself, including plenty of spare o-rings and screws, two premade clapton coils, a strip of mesh and mesh tool, tri-wing screwdriver, and three strips of shoelace cotton. One strange omission for a modern RDA though is that there is currently no squonk pin included. I asked Univapo if this would be in the final retail packages and they said yes it would (I’d advise checking before purchase if this is a deal breaker for you!)

The Symba RDA breaks down into four parts including the drip tip which has a unique inverted groove design to prevent condensation. This fits into the upper part of the barrel with an o-ring on the inside of the barrel so it should work with all your 810 drip tips, the inside of the upper barrel is flat. It’s quite small as well with a 25mm diameter and just 23mm tall (excluding drip tip and 510) 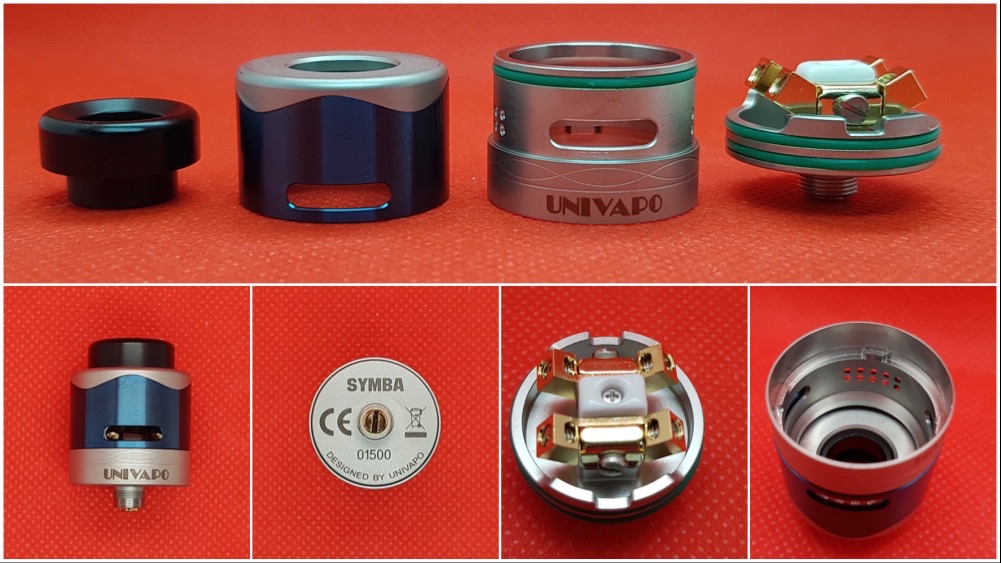 There are two airflow options, a wide open cyclops style and a reduced honeycomb style, which can be selected by rotating the lower barrel 90 degrees on the deck depending on which style you prefer. This locks down in place with two tabs and it can be quite tricky to get these lined up and have the upper barrel section sit square on the deck. This also means that although you can adjust the amount airflow, it won’t be centred over your coil as the lower barrel is now locked in position. When closing the airflow down, you also have to bear in mind that you can’t completely close it down because you will then start to expose the unused airflow system which is now lined up with your cotton! On the honeycomb airflow, this equates to four of the ten airflow holes always needing to be open.

The build deck itself is where things get really interesting though as it includes both a clamp system for mesh along with a conventional dual coil post design. Installing either mesh or conventional coils is easy. 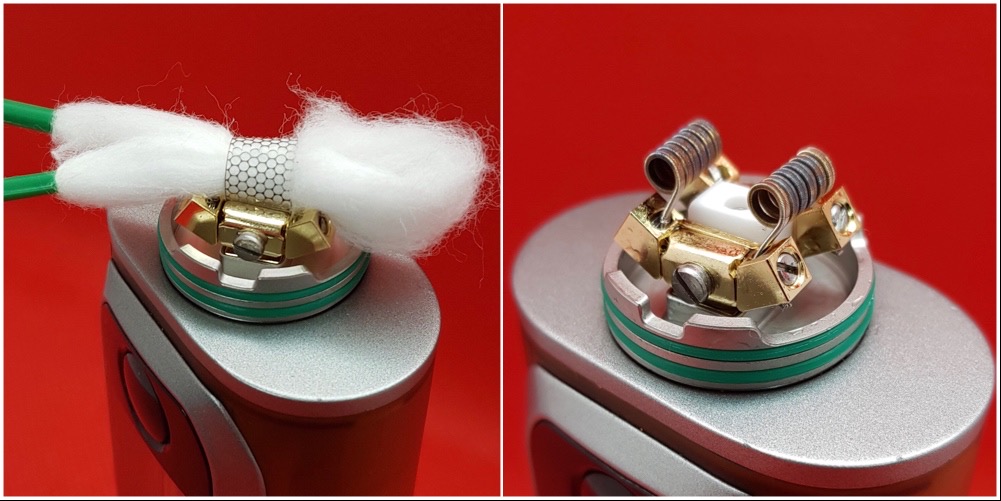 For the mesh build, simply unscrew the clamps, wrap your mesh around the supplied tool and insert the ends into the clamps. There’s a spring loaded ceramic block under here to help keep the mesh in contact with your cotton, and I found the perfect amount of cotton was achieved by taking one of the included shoelace cotton strips, folding it in half and then passing this through the mesh as shown.

I’m not a big fan of mesh RDAs and, although the vape was decent, I wouldn’t say it did anything to change my mind. I know others rave about mesh RDAs, so if this is your thing I would say this is about on par with other mesh RDAs I’ve tried. I was also wary of the possibility of a dry hit which is something you definitely don’t want from a mesh coil. The inclusion of a squonk pin would definitely be beneficial here!

Installing standard coils was equally easy, there’s even space under the posts to easily clip your leads as well but this wasn’t required with the included coils. You need to make sure there’s a little clearance between the coils and the ceramic block as well when installing.

This gave me a much more satisfying vape. It was all air and no trousers with the open cyclops airflow and I much preferred the honeycomb airflow which gave a slight amount of restriction. I’ve said previously there’s a reason these dual coil RDAs keep cropping up, they work!

A good first step into the hobbyist side of the market from Univapo, the two in one deck gives you the option to try out both mesh and conventional coils. A couple of the tolerances could be slightly better, it’s a bit tricky, for example, to line the top cap squarely on the deck and the afc perhaps moves a little too easily but the latter can easily be solved by finding a slightly thicker o-ring. Personally I’m not a fan of dripping and much prefer squonking so the absence of a squonk pin limits this for me, but Univapo have indicated that this should be included in future batches, check before purchase if this is important to you.

Many thanks to Univapo for sending the Symba RDA our for review. 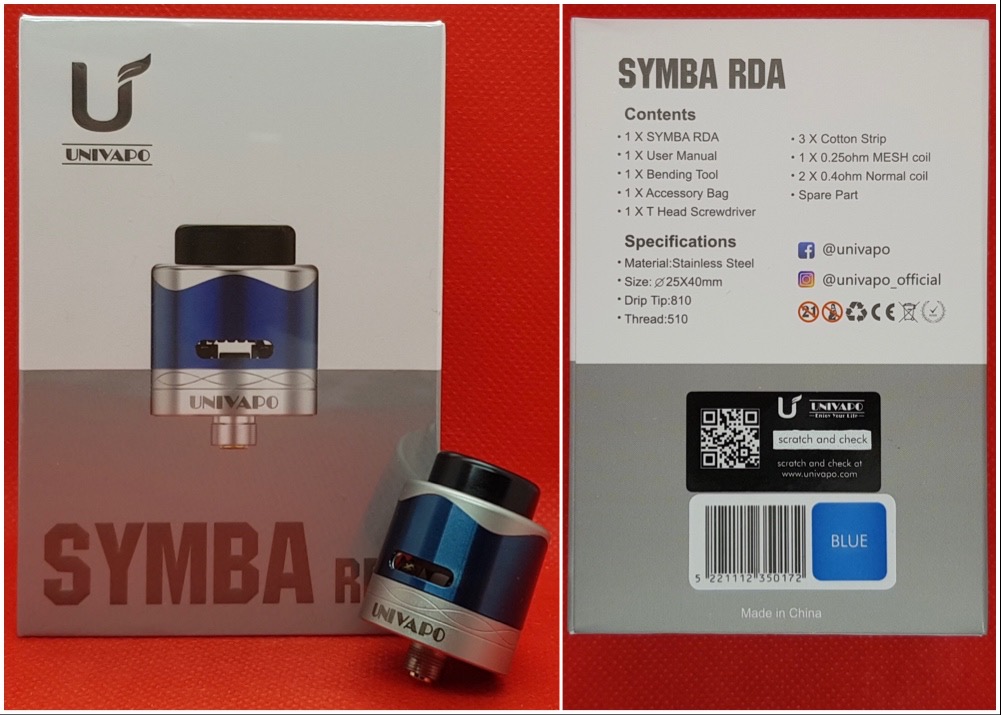