The Carrate 24 is a rebuildable tank atomiser manufactured by China based Teslacigs, featuring a 24mm width, internal leak proof design, a 2.5ml capacity with a threaded top filling method, adjustable bottom airflow and an easy to use two post build deck with a clamp style design, making it easy to build and mount large coils. With it’s large wicking holes, it’s designed to keep up even when chain vaping high VG liquids at high power, and still provide superior performance! 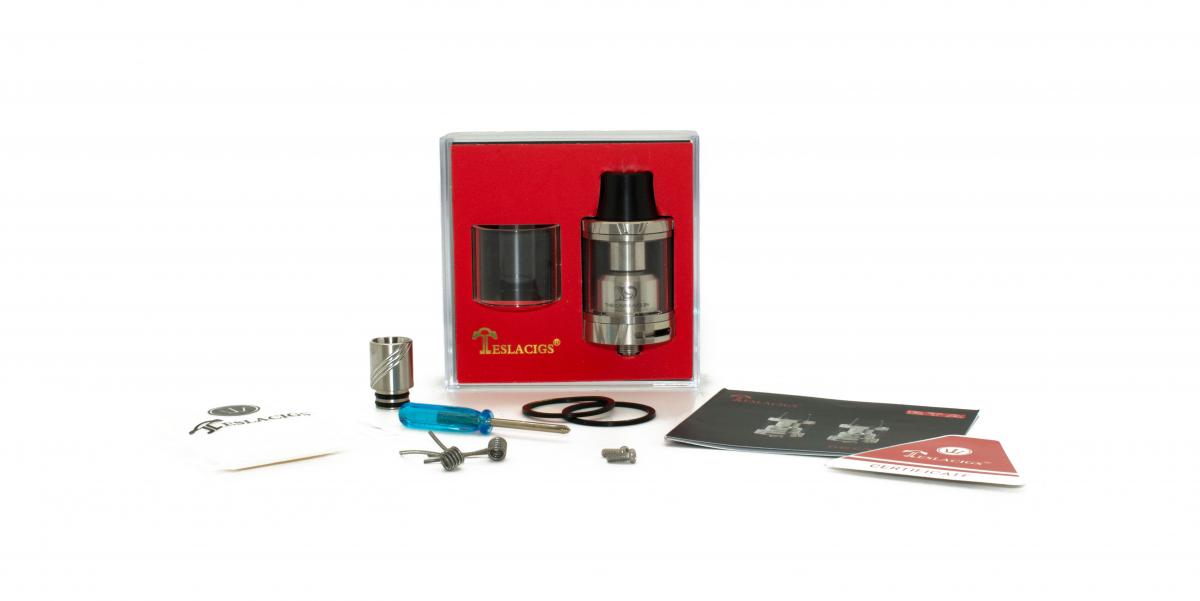 The Teslacigs Carrate 24 sports a solid stainless steel construction with a 24mm and a pretty short and squat height, there’s definitely nothing flimsy about the build quality of this tank, a solid reinforced pyrex glass tank section is also found here, that is thick enough to withstand some decent abuse! A spare is also included in the pack should you damage or break the original one. You can fully strip down the Teslacigs Carrate 24 in order to clean it, and the threads are generally pretty smooth.
I had a small issue with the top cap at first, in that it was wedged pretty solidly, and I struggled at first to open it without managing to take the chimney with it. With the use of a pair of pliers, I managed to separate the two which seemed to resolve the issue. On the top cap there is a sloped delrin wide bore drip tip pre fitted, a stainless steel wide bore drip tip is also included in the box, and a 510 drip tip fitting is present allowing you to use your own drip tips if you prefer.
At the base of the tank you have the generously sized adjustable airflow, engraving around the base and a fixed 510 connector pin, that protrudes sufficiently out of the 510 connector. All in all, it’s a pretty decent looking RTA, that sports decent understated looks.

Around the base of the Teslacigs Carrate 24 you’ll find two generously sized cyclops airflow slots, that can be adjusted using the airflow control ring, from a restricted lung hit right up to a very loose direct lung draw. The airflow control ring is fairly stiff, and can be a bit of a pain to adjust when the Carrate 24 is screwed onto a mod. It isn’t anything too troublesome however! 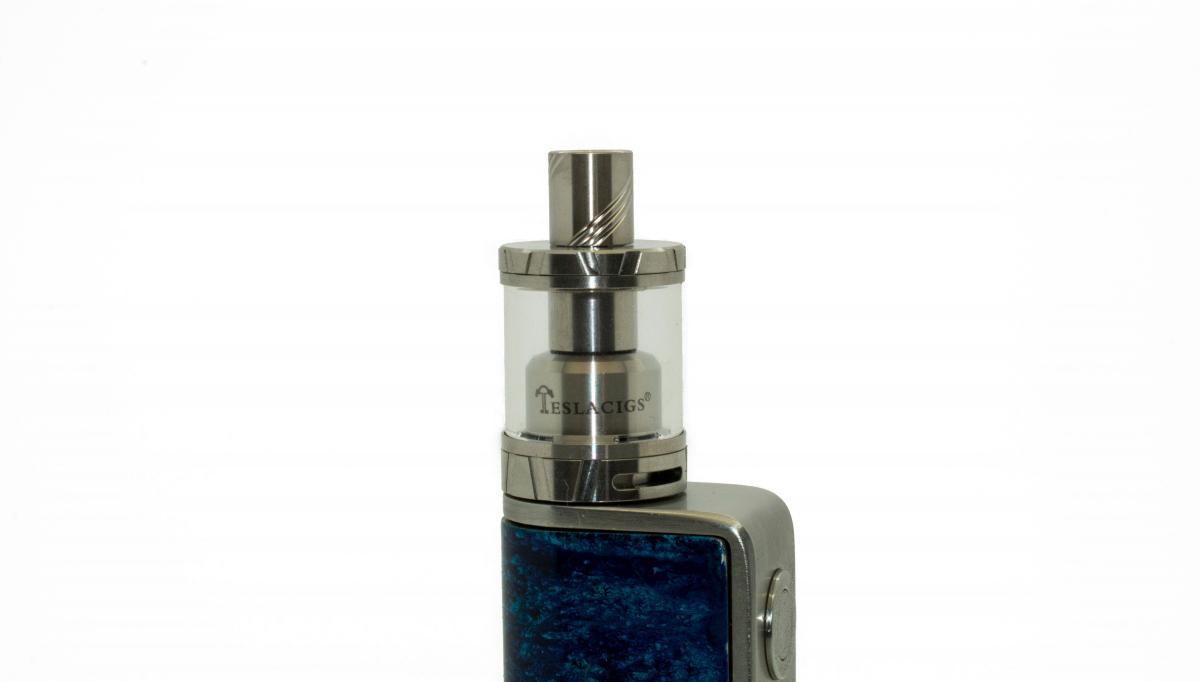 Teslacigs have designed a pretty unique build deck for the Carrate 24, a two post arrangement is found here with an interesting clamp styled design. Essentially you unscrew the Phillips head post screws to loosen the clamps, slot your coil legs in, and tighten the screws back up to clamp your coil legs down. You can fit some pretty large coil legs in here, it is a little fiddly at first, however you quickly become accustomed to using this method.
There is a large airflow hole at either end of the deck that you want to make sure your coil is placed over, and for best results keep your coil fairly low to this hole. You can fit 3mm coils in here at a pinch, however the chamber isn’t particularly large so make sure your coils don’t touch the chamber. There are four wicking slots in total, which you just need to tuck your coil legs into. Overall it isn’t a particularly troublesome build for relatively experienced rebuilders, but newbies may need some time to adjust to the clamp system.

I installed a dual Stainless Steel 316/Nichrome 80 coil build in the Teslacigs Carrate 24, with a 2.5mm ID, that came out at 0.28ohm. I started off at 60 watts, which gave me some very nice flavour and an impressive amount of vapour. When I hit 75 watts, I found my preferred sweet spot, there was a very flavourful and warm vape with bagfuls of flavour. The Teslacigs Carrate 24 definitely performs well indeed on both the flavour and cloud fronts, with a delicious vape and thick clouds of vapour provided!
I was also very impressed with how well this tank was able to wick juice. Even at high wattage, I was able to run this tank up to 100W without dry hits, with thick high VG juice. The only downside is the small 2.5ml capacity, which drains extremely fast. The tank also does get quite hot with high wattage use, so this is something you need to keep an eye on.

Overall the Teslacigs Carrate 24 is a great little performer, the unique two post clamp design makes for a very quick and easy build once you are used to it, and the wicking holes make rewicking dead easy. I have no complaints about this tank when it comes to flavour and clouds, as it’s a top performer on both of those fronts in my opinion! The Teslacigs Carrate 24 is available at under £20 with a lot of vendors at present, which makes this tank serious value for money!