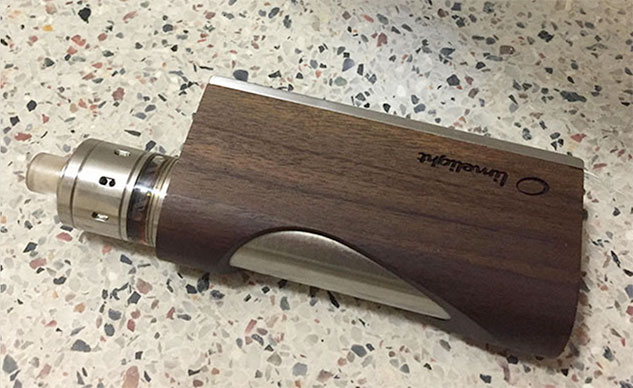 Vape Ware Mods have followed up the release of the massively successful Nextgen atomiser with the smallest Genesis tank yet, the Nextiny. Like the Nextgen, it’s set up for you to build with mesh around the centre post, and amongst a few adjustments the height has been reduced in order to make the chamber more condensed and improve the already world class flavour performance found with the Nextgen!

It’s a tiny little thing, that is machined and built in Greece to the highest standards around, and it’s a very sought after atomiser, down to its superb performance and it’s ease of build, that opens up mesh builds to just about everyone with it being set up to make it much easier to build on for not just seasoned mesh veterans, but mesh newbies too.

I was a huge fan of the Nextgen, being lucky enough to own a genuine one, and I have been that impressed with the Nextiny that I now own two of them. Read on to find out what makes this little atomiser so good... 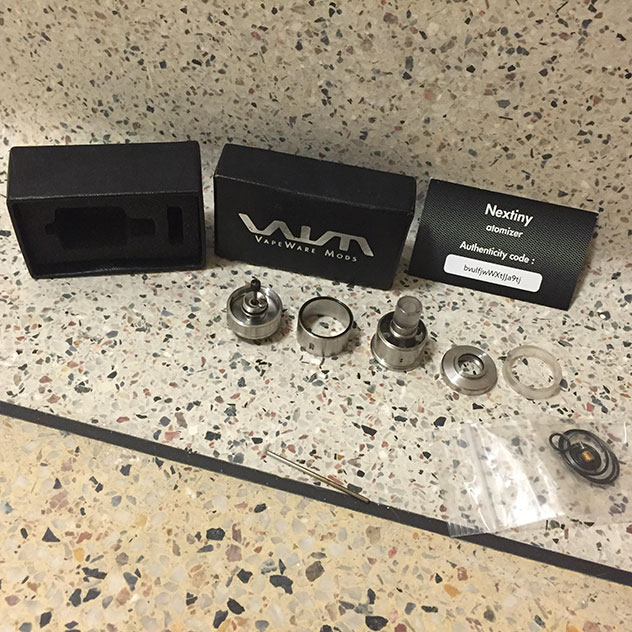 I've been lucky to get my hands on both the Nextiny and the Nextiny Special Edition, and both come packaged in a black Vape Ware Mods presentation box, that houses the Nextiny itself, a spares kit with spare o-rings and screws, a metal tank section, a forming rod and an authenticity card. The Collectors Edition comes with a 30mm to 22mm beauty ring, engraved with the VWM logo and a unique serial number, as well as a five play airflow control ring allowing for even more airflow. 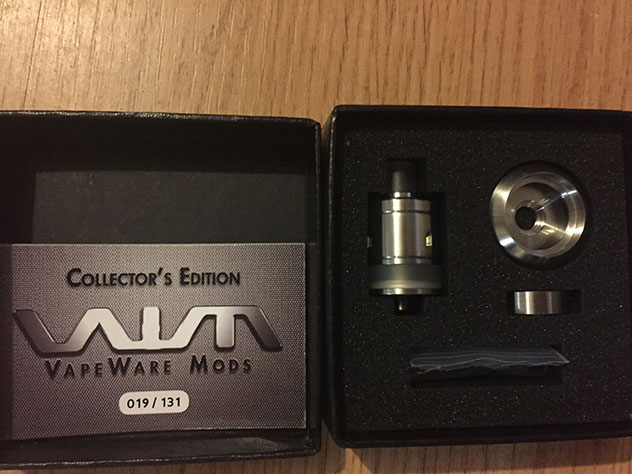 At 27mm in height and 22mm in width the Nextiny is the smallest Genesis atomiser on the market, and it's one of the smallest rebuildable tanks around. The condensed chamber and centre post wicking combine to provide intense flavour, as the distance between the centre post and drip tip is almost nothing, and with the airflow and right build, it won’t get too hot either. It has a capacity of roughly 3.3ml when using the polycarbonate tank section, and roughly 3.4ml when using the stainless steel tank section. Filling is as easy as screwing off the top cap and filling with juice, unlike the Nextgen this time around you don’t need to remove the drip tip beforehand to fill if you use the supplied drip tip. 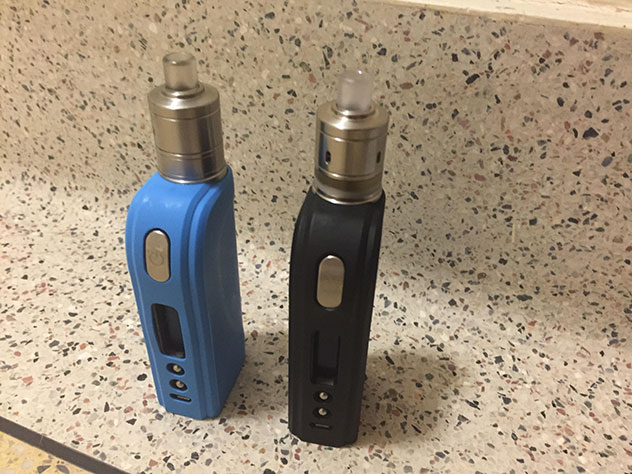 Build quality is absolutely fantastic, it’s one of the most well machined atomisers you will ever see, the threading is absolutely outstanding and although small it’s a very robust little unit as well. It’s machined from 304 grade stainless steel and features and ultra fine brushed finish, and it’s simple looks are breathtaking. It definitely ranks up there as one of the best looking atomisers around, that’s for sure! 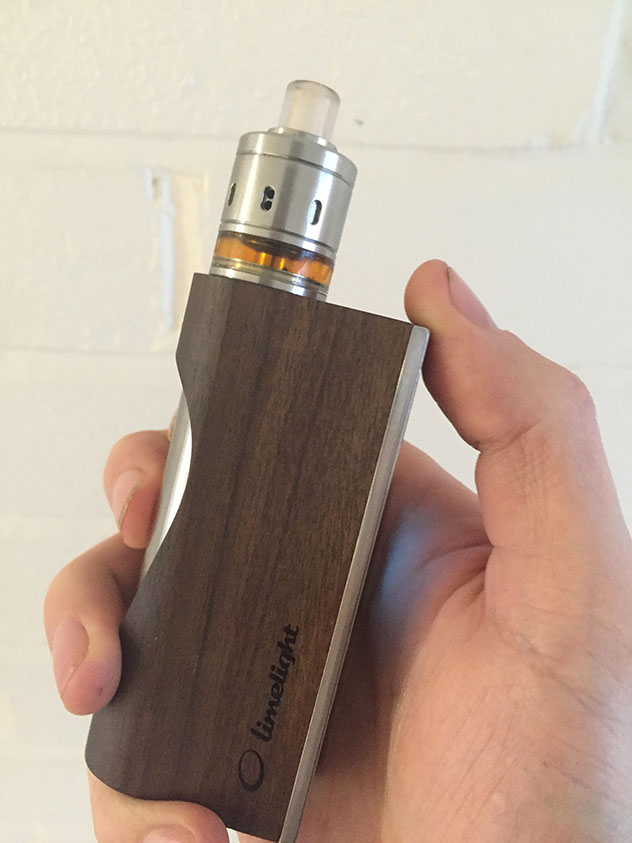 The tank section is made from Quadrant PC 1000, like the drip tip, making it very tough, however you will still want to make use of the included stainless steel tank section if you vape tank cracking juices. There is a French modder on Facebook named Florian Rosier who makes a beautiful Quartz tank section engraved with the VWM logo for the Nextiny, which will be enable you to vape any juice you like in the Nextiny without fear of cracking the tank section.

The Nextiny is set up for mesh builds, which have put off many in the past, however the Nextiny is designed to make building with mesh easier. With its centre post wicking configuration the Nextiny opens up mesh builds to many more users. There's the small thoughtful touches to make builds easier as well, such as the tiny notch cut in the top nut which holds your wire in place when screwed in and thus helps to keep your resistance stable, and the notch cut in the deck around the negative post allowing you to loop your wire around the negative screw, pull it tight and trap it down under the screw easily. These small touches added in by Vape Ware Mods go a long way towards helping you to have a successful and stable mesh build. 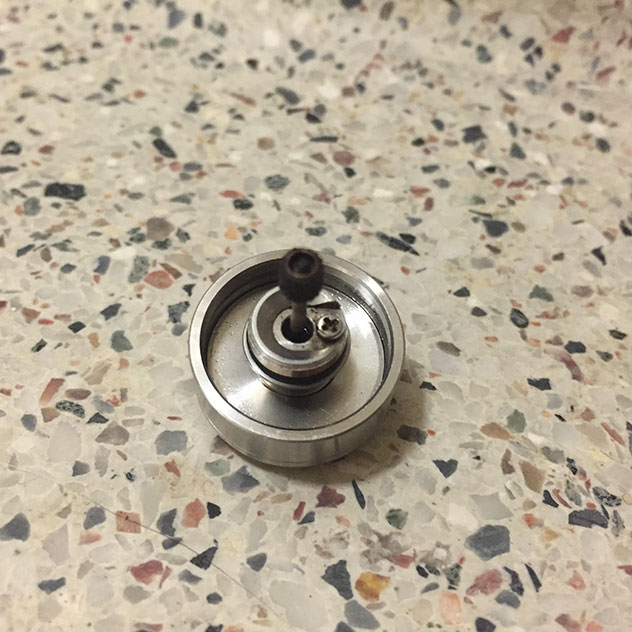 Personally my preference with the Nextiny is to use #200sf grade mesh and #300. One of my Nextiny’s is set up with #300 only, with measurements of 13mm in height and 30mm width rolled reasonably tight, and my other one is set up with #200sf and a #300 topper, with the #200sf cut to 13mmx40mm and the #300 cut to 5mm x 10mm, and they both bring something different to the table. The #300 only build seems to suit tobacco juices very well for me, and the #200sf with a #300 topper is used primarily for high VG juices and for vaping at over 20 watts, as the #200sf wicks extremely quickly and combined with a #300 topper, it provides great flavour too.

You’ll need to cut your desired lengths of mesh and ensure you oxidise them fully to remove impurities and make it easier to roll, grip you mesh with ceramic tweezers and carefully torch it all over until it has darkened in colour. Place it on the forming rod afterwards and roll it reasonable tightly, if you are using a mesh topper with your build roll this too in the same direction you rolled your mesh inner. Give the wick a good torching once rolled again, then place it on the centre post. Before coiling, lift the mesh up ever so slightly so that the wick is not shorting against the deck.

For coiling, if you have a tube mod to hand this makes things much easier. I cut off a length of 0.3mm kanthal wire, trap it down with the top nut, hold it at arms length and slowly rotate my mod, until I have 4/5 evenly spaced wraps, and loop the wire around the negative screw reasonably tightly before tightening the screw down and cutting the excess wire off. It’s important when coiling that you do not coil too tightly, as you do not want to choke off juice supply. After this, I give it a good pulse and carefully adjust the coil wraps using tweezers, to remove any hotspots. Everything should glow evenly and there shouldn’t be a coil wrap glowing brighter than the others!

Once done, you should have a build that will last you months and months with a dry burn and clean here and there, just keep an eye out for any hotspots appearing again when dry burning and adjust accordingly. And as the mesh beds in, the flavour only gets better and better... 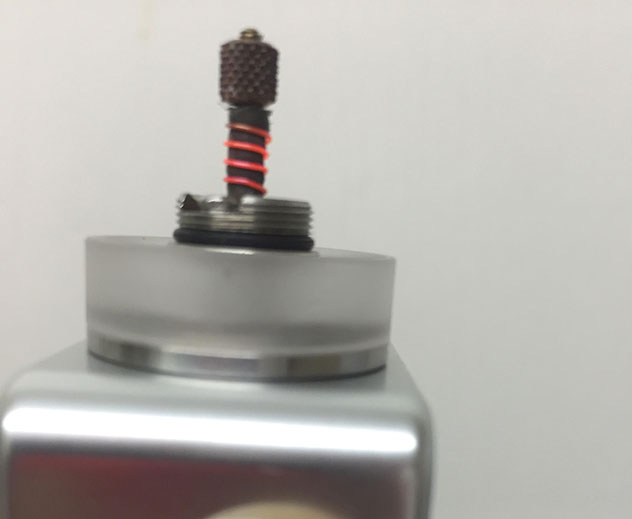 The Nextiny is primarily a mouth to lung atomiser, however a restricted lung hit can be achieved with the most open airflow setting depending on your build, and with a five play airflow control ring (included with the Collectors Edition) you can have four airflow holes open at once, allowing for big airflow and direct lung hits. The airflow control ring can be adjusted easily, and there are four dual airflow holes drilled into the top cap at 1mm, 1.2mm, 1.4mm and 1.6mm. 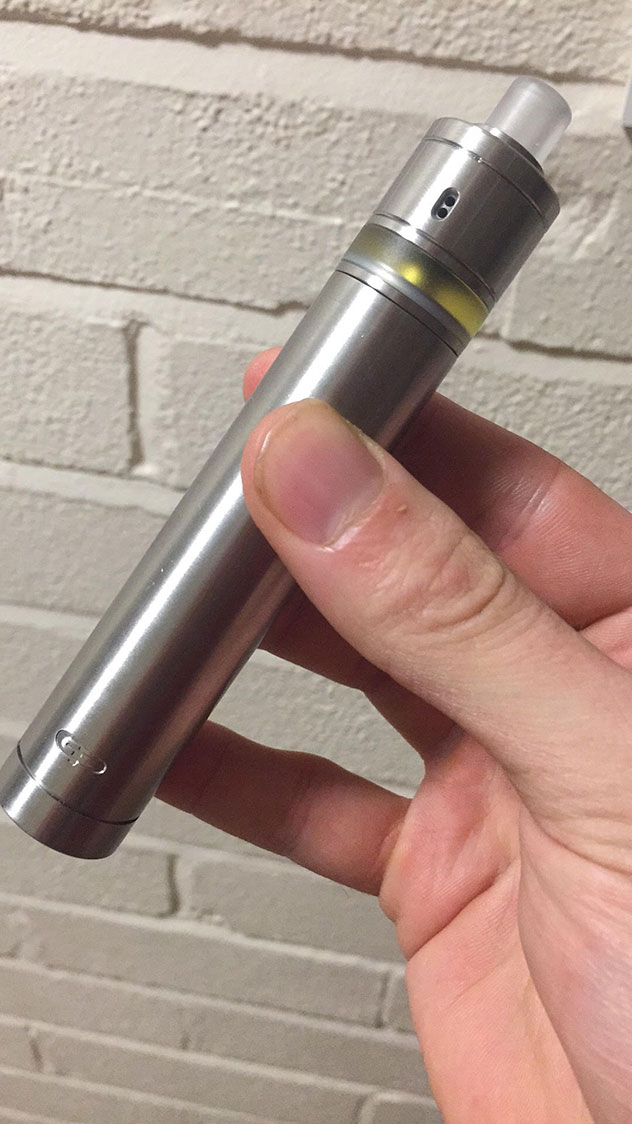 One way to sum up how the Nextiny performs is that it is that good, I had to get my hands on a second one! And I'm not the only one either, with many Nextiny owners being the proud owners of multiple units, as there are very few atomisers that stand up to the performance of this one. The flavour is otherworldly, with your juices absolutely singing on mesh, and it can be run at pretty respectable wattage for a Genesis tank as well. With the 5 play AFC, I've been able to run mine at over 25W, which is something I've never been able to do with a Genesis atomiser and mesh build before. The small height and resultant condensed flavour really helps bring out the best in your juices, and you'll pick up hidden flavour notes you never even knew existed before, and vapour production is very good for a Genesis as well. The Nextiny is an atomiser I can rely on to provide me with a spectacular vape, each and every time I use it. 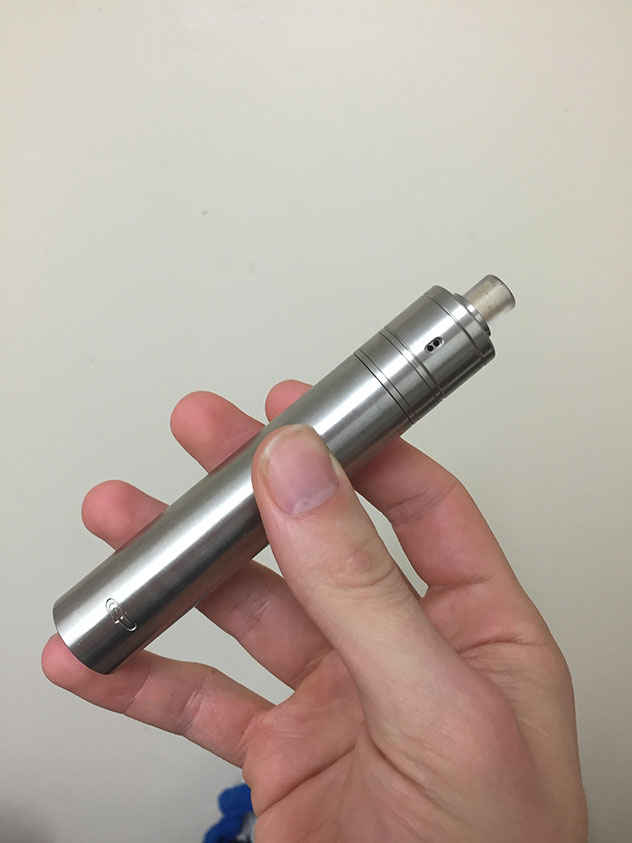 With an SS mesh build, wicking performance can be affected by the different grade of mesh you use, and the flavour just gets better over time as the mesh beds in. Plus you have the bonus of only needing to dry burn your build and keep an eye out for hotspots every few tankfuls of juice or so, and your build will run smoothly for months! I've been running a #300 mesh build in one Nextiny that wicks juice up to 75% VG just fine, and my #200sf with a #300 topper build wicks anything I throw at it, with the added bonus of being able to run it at upwards of 20W knowing that the wicking will keep up with me. Different mesh grades and builds will all affect performance in one way or another so it's great to experiment and discover what suits your own vaping style.

You won't get any leaks from the Nextiny either, unless it's overfilled, as the tank section of the Nextiny is sealed off once everything is screwed back together. I've had it lying sideways, carried it around in my pocket all day and even dangled it upside down for an extended period of time, and not a single drop leaks out.

The Nextiny, and its predecessor, the Nextgen, definitely have some part to play in the recent resurgence of the Genesis atomiser, and I believe that is down to the extremely easy build and the incredibly rewarding vape that follows, and both the Nextiny and Nextgen have made the Genesis atomiser more accessible to those wanting to try out building with mesh. Customer service from Vape Ware Mods is paramount as well, with the guys running it taking a great deal of time to make sure customers are happy and any enquiries are handled efficiently!

The vape that the Nextiny provides is quite unlike anything else, the flavour is simply incredible and it ranks right up there with the very best atomisers around. It's easy to build and the build quality is absolutely world class, it makes building with mesh accessible to anyone, and I believe that it's one of the most well machined and best looking atomisers around.

The Nextiny represents the next evolution in Genesis atomisers and for flavour, you won't find many that can outdo the incredibly intense, flavourful vape the Nextiny provides. This really is one of the very best atomisers I have ever owned! 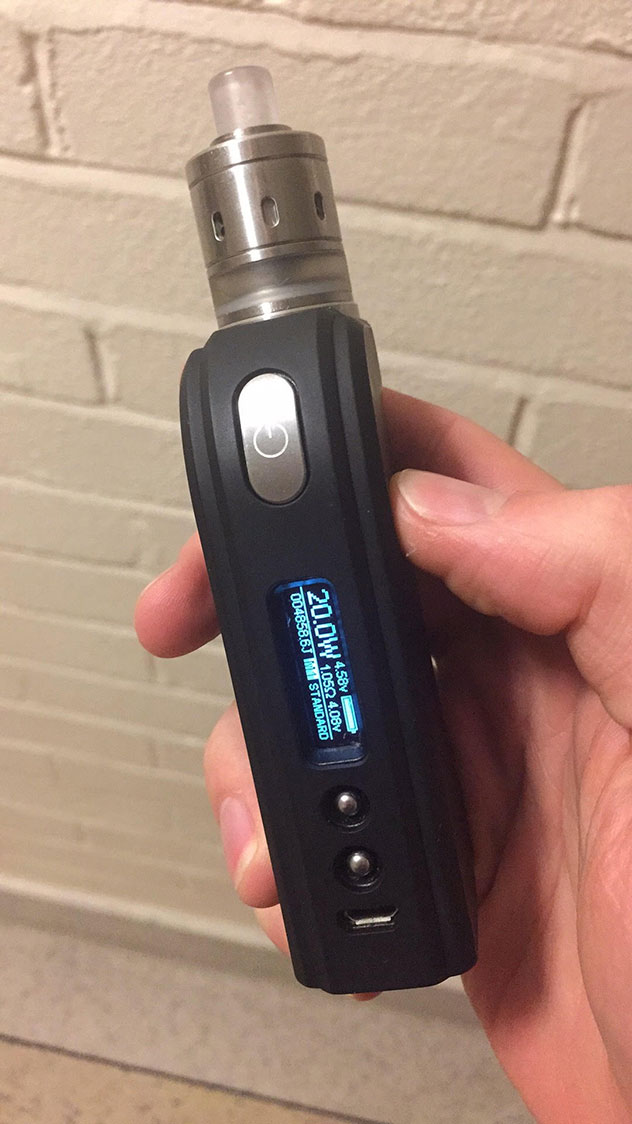