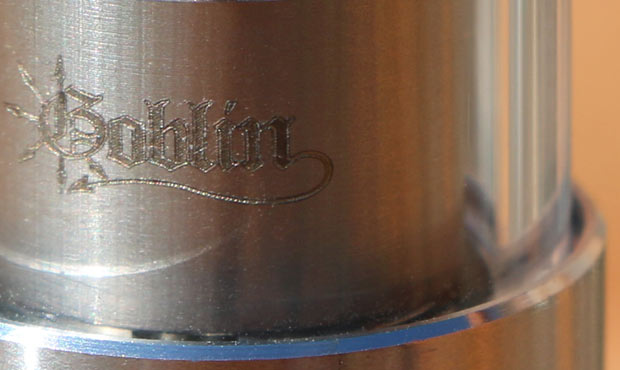 Youde Technology Co LTD  (also known as UD - for Unification of Design!) are well known within the vaping industry for providing excellent value genuine rebuildable dripping and tank atomisers, such as the top selling Aga-T Rebuildable Tank Atomiser (RTA) and the Igo RDA series. They have been around a fair while now, and their latest offering is the much hyped Youde Goblin RTA...

The marketing blurb says ‘The Youde Goblin RTA is an incredible rebuildable tank atomizer with gigantic adjustable airflow holes. Tired of dripping constantly? You will be blowing massive amounts of vapour without requiring you to drip constantly due to the Kayfun styled design. The Goblin RTA provides a dripper like experience with the high 3ml capacity of a tank just like a Kanger Subtank. The bottom pin is made out of copper for low voltage drop. Features 4 post holes for easy builds and 2 massive airflow holes on the deck’.

It’s been built to rival any Rebuildable Dripping Atomiser (RDA) on both flavour and cloud production, and here’s how the Youde Goblin does a very good job of it.

A few strands of wire and some silica. I’m not even hazarding a guess as to what gauge or even material the wire is made out of, that stuff always goes straight in the bin for me!

No drip tip is included with the Goblin, bear in mind things can get a little warm with the Goblin when vaping at high power so a stainless steel one may not be your best option here. 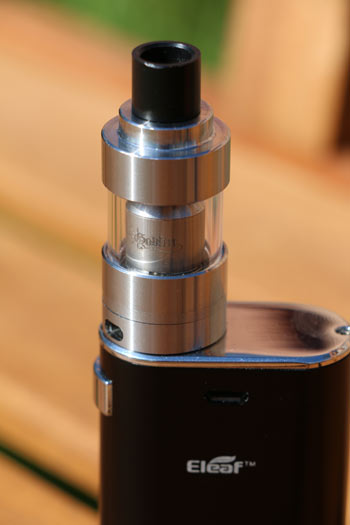 It’s short, stubby, compact and not the best looking tank on the market, but it does look the business on a ‘mini’ mod such as the IPV Mini 2. The styling gives more than a little nod to the Kayfun Mini, but that is where the similarities end. The chimney has a small ‘Goblin’ logo engraved. To the side you find the generous AFC ring (more on the airflow below). On the base of the unit the UD logo is engraved, along with 2015 on one side and the fill port on the other, at the bottom you find a serial number.

Now, I had a few issues with the machining quality here. When putting the tank back together after rebuilding/rewicking I found that you do need to screw the tank sections back together pretty firmly, as there seems to be a bit of play in the tank, which could result in leaks. One of my negative post screws was threaded, but I managed to lift the blighter up, pull it out with brute force and replace it with a brand new screw without damaging the post itself. Lastly, the fill screw was stuck in so tight I had to resort to grabbing a power drill and ‘carefully’ getting it out as I went through every option I could think of (you likely won’t have to resort to that length!) There also was a more than generous helping of machine oil present in my unit, so I highly recommend thoroughly cleaning the Goblin before you use it.

There are a few grumbles about the size of the fill port, I have seen a few complaints that the fill port is so tiny that a very small gauge needle is required to fill the Goblin up with juice. Personally, I cannot understand it, as I have used standard 10ml, 30ml and 50ml ‘squeezy’ bottles to refill, along with droppers, and not spilt a drop. A comparable tank for this would be the Orchid V4, but the Goblin is even easier to fill than that. Unlike with the Orchid series I haven’t ever needed to resort to filling using a syringe or even a needle nosed bottle. It’s quick and easy to refill on the move without any leakage, just make sure you take a screwdriver out and about with you!

Once the initial ‘teething’ problems were out of the way, I haven’t experienced any other issues. It’s been solid, reliable and a very enjoyable tank.

Even for a RTA it’s small. It is actually the least impressive part of the Goblin for me, but that may be down to frustration with a few builds on my part! Newbies to building may struggle a bit here as you aren’t given a massive amount of room to build. I actually tripped up myself here on my first build, after examining the deck I thought that a dual coil build consisting of 8 wraps of 0.42mm kanthal with a 3mm coil internal diameter would fit perfectly. I placed my coils in the posts, centred my coil over the airflow and raised both coils up, looked like I was in business, went to place the chimney over the build to check and...Denied! The chimney would not fit over my build, absolutely raging! Brewed a cup of tea, sat down and had a quick vape, went back to the build with a new plan. I dropped a wrap off each coil, reduced the internal diameter of the coil to 2.5mm and wicked with Muji, it was snug but it fit without anything touching the chimney or deck. Checked my resistance on my ohms reader- 0.3ohm, we are good to go here! Filled up with 70VG homebrew GVC, let it sit in the tank for a few minutes then fired her up. Wow, just wow. So much hype has been made over the cloud production of the Goblin but the flavour is the winner here. Lovely, warm and rich. Absolutely incredible flavour, I really was not expecting it to be this good! 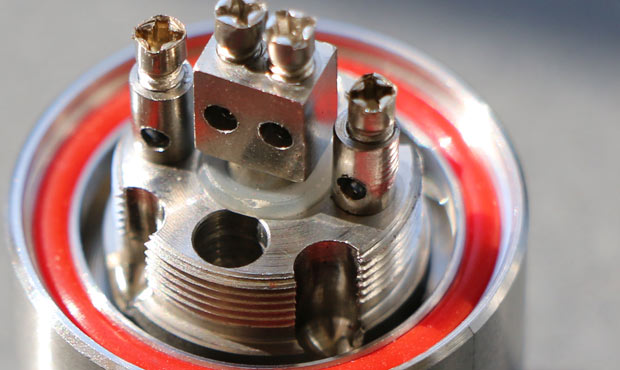 The deck itself is built for dual coil sub ohm builds and aimed at cloud chasers. The juice channels are absolutely massive and I have had 85vg juice through the tank at 70 watts with no issues. There are 4 posts present, the screws are very small and the post holes are quite tiny, but with the size of the deck and chimney you are not going to be using large gauge kanthal anyway. The chimney is swappable to a larger one with the generously included spares kit, so you can increase the height of the chimney (and thus the height of the goblin itself) with ease if you wish to increase the capacity of the tank.

I actually prefer using the supplied 3ml nano kit, you may only go down to a 3ml juice capacity however I believe that the due to the reduced chimney length you get even better flavour out of what is already an outstanding RTA for flavour. Being used to using RDA’s all the time this doesn’t cause me any great problems, but the option is there for you to use either the supplied 4.5ml or 3ml capacity, which is an excellent feature. Either way, this beast guzzles juice like a thirsty toddler so whichever option you use you are going to be refilling the tank often. Put it this way, my current 0.3ohm build averages about 30 puffs at 60 watts before it needs a top up!

For an RTA, it’s huge. The biggest I have encountered on an RTA. Not quite on the level of the Freemax Starre for example, but it’s a lot bigger than sub ohm RTA’s such as the popular Orchid series. There are two oversized 3mm airflow slots here. I will say that the AFC ring is quite loose once you have unscrewed the tank from your mod, but when the tank is on the mod. On more than one occasion it has slipped off the bottom of the tank when I have gone to access the build deck and I have been chasing it around the floor! There is no tactile click when you move the airflow ring to select your preferred setting, however I never experienced it moving around easily when the Goblin was attached to a mod.

This is another tank aimed at lung hitters, but by closing the AFC ring right down you can mouth to lung hit on the Goblin if that is your preferred method. Wide open, you get a huge airy draw and big clouds, however you still get better than average cloud production even with the AFC ring closed right down. My personal preference was to have about a third of the airflow closed off, this provided me with the perfect balance of flavour and vapour, and it really surprised me as I usually only use my rebuildables with the airflow wide open! 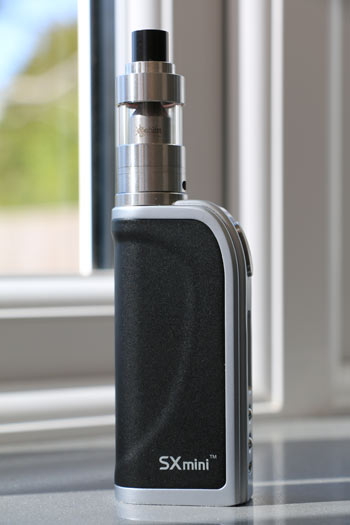 Now, it is flawed in the sense that there are a few machining and QC problems here. I know I am not the only one to experience a few issues. However, once you get around these issues and get the Goblin purring it’s an extremely reliable and versatile RTA, and you get a hell of a lot from it for the price that you pay.

Much has been made about the cloud production but the thing that astounds me is the flavour you get from the Goblin. It is the best I have ever experienced on an RTA and I never thought as a (formerly) hardened RDA user that I would say this, but the flavour is on par with a dripper. That is the first RTA I have ever felt comfortable about saying that, and it truly surprised me, as I was expecting this to be another sub ohm cloud chasing tank. To test this theory, I put the exact same build in my Mutation X V3 RDA (I know it’s no flavour RDA!), used the same juice (South Coast Vapes Nipple Juice), and I’m going to say the flavour on the Goblin was superior.

Another truly impressive feat is that I have had no leaks with the Youde Goblin. That’s right, NONE at all. I’ve carried it around in my pocket, left it lying on its side and not a single drop has leaked out. That is really impressive for an RTA, I am used to leaks from them, but that definitely impressed me massively.

Once you get around the small niggles with the build quality and get this bad boy going, you have, in my eyes, the premiere budget RTA on the market right now. Previously, my favourite sub ohm RTA was the Orchid V6, but the Youde Goblin has it well and truly beat on all aspects. For flavour I haven’t tried an RTA like it. With the airflow wide open it chucks huge clouds. It provides more than enough bang for buck when you compare the price to more established RTA’s on the market, and it hits like the 9.10 from Tokyo! It is one of the hardest hitting tanks on the market, does it ever live up to the ‘tank’ description, and like a Challenger MK2 it’s robust, powerful and punches well above its weight!

PotV purchased this item from BA Vapes.  There is a competition to win a Goblin here, competition closes May 14th 2015.