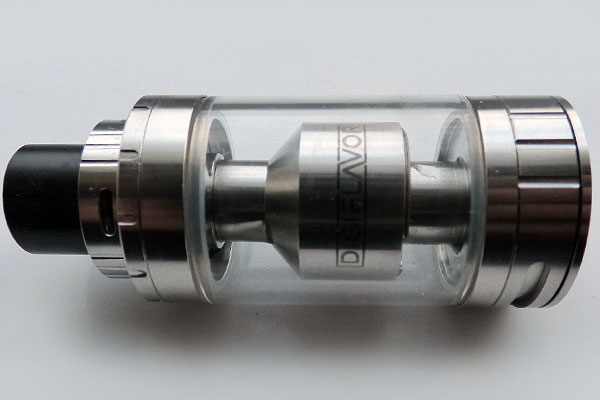 The Fuji GTA is designed and manufactured by Digiflavor who are a sister company of Geek Vape. It is offered in two different versions, a single coil and a dual coil model so you really need to make sure you purchase the one that suits you best. Ideally it would have been nice if the tank came with two different decks but I guess you can’t have everything.

The Fuji is 25mm in diameter has fully adjustable airflow at the top and bottom of the tank and holds 6ml of E-Liquid. It is also rather unique since it is marketed as a Genesis Tank Atomizer but it is not exactly what you would expect in the traditional sense. So let’s dive into the review and see what it has to offer! 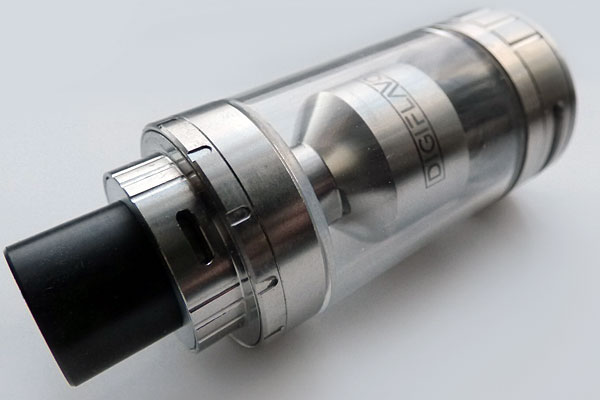 Despite its marketing the Digiflavor Fuji GTA (Genesis Tank Atomizer) is not actually a Genesis tank in the traditional sense but is instead a unique hybrid design that features some Genesis atomizer trappings but at the same time incorporates the most common aspects of a traditional RTA (Rebuildable Tank Atomizer). A fully enclosed Genesis style tank system would probably be the best way to describe it.

The overall machining is very good and the Stainless Steel has no sharp edges. The glass feels fairly durable and there is a replacement tube in the box should you ever have an accident. The Fuji is 25mm diameter so depending on your mods it may overhang somewhat. It is fairly average in height and is roughly 5-6mm taller than the Griffin (22mm version).  All of the O-rings seem decent and the box does include spares should they ever start to degrade.

What you fill find very unusual about the Fuji is that unlike a traditional RTA the chamber is not actually fitted to the bottom of the tank and is actually positioned about half way up so it forms a kind of bell or lampshade shape. When filling the tank juice flows down and then rises inside the chamber first which contains your two wicks dangling from the deck. This is really where the tank incorporates its Genesis style attributes but an actual traditional Genesis tank, as most people understand it, would have a juice reservoir located directly beneath the main deck, whereas with the Fuji it literally sits in the juice.

In many respects it is an interesting design choice and it does have some benefits since there is absolutely no need for juice control since the juice has no channels to pass through and it also tends to make the tank look very unique when it is filled.

The deck features a two post design and has side tension screws that feel durable and work well. There is a good amount of space in there for larger diameter coils. 3mm ID was no problem and 3.5mm ID should also be fine. One thing that I did notice when you fit the chamber over the deck is it does tend to scrape a little and you have to press it down with a slight amount of force to get it to go over the deck but I never had any issues with coils shorting so I suspect it is just a minor machining issue.

The tank is fitted with a reasonably wide bore Delrin drip tip but sadly it doesn’t use a standard 510 fitting so not all of your drip tips will fit it. It would have been nice if Digiflavor had included a 510 drip tip adapter but sadly you are stuck with the stock drip tip. Nevertheless it feels comfortable on the lips and the Delrin really does keep the heat to a minimum so unless you’re especially picky it won’t be a major issue. The tank holds 6ml of E-Liquid. 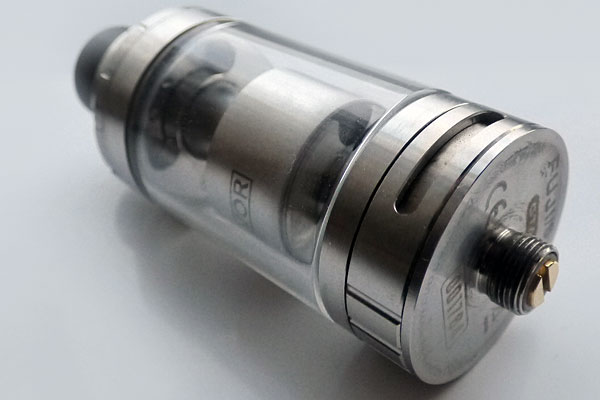 With two large Cyclops style adjustable slots the Fuji has excellent airflow although it can tend to sound very wheezy when slightly closed down (more on that later). In addition there are four small airflow slots which feature two settings located directly above the top cap. Fully opened up the Fuji caters to a direct lung inhale and becomes more of a slightly restrictive one as you close the airflow down. You can’t really get away with mouth to lung since the tank has far too much airflow overall and the unchangeable wide bore drip tip also contributes to that.

The airflow adjustment works well and each setting clicks nicely into place. The only problem is that you can’t easily adjust it when the tank is fitted to your mod. There is some minor knurling on the airflow ring but it simply doesn’t protrude enough to be of any use. 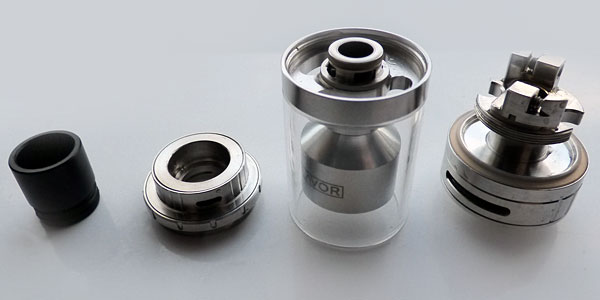 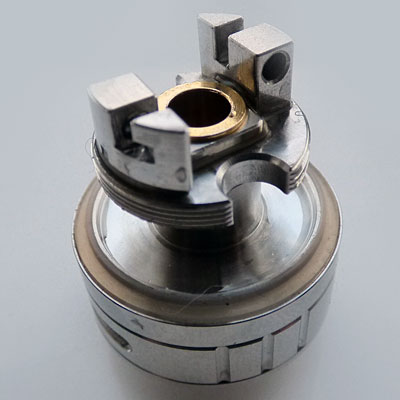 My first build was using 26 Gauge Kanthal and I went for 3mm Internal Diameter Coil that had a final Resistance of 0.7ohm. The screws work well but the multi tool that was included with the Fuji was annoying because I was constantly having to avoid catching one of the ends of it on my coiling rod tool while holding the wire tight at the same time between the post and screw and then use the tool to tighten up the screws, so at that point I felt like two hands were simply not enough! It is of course a little more straightforward than I have made it sound but I do feel it might feel less approachable than a lot of other RTA’s for a rebuildable newcomer to get to grips with.

I wicked the coil with some Japanese organic cotton and that is a simple enough affair since the deck is recessed on both sides for your wicking tails to rest against. You do need to paint the wicks with some E-Liquid to get them to stick in place. Ideally you should have the wicks dangling at least 3-4mm below the chamber since when I cut the wicks flush with the chamber on my first attempt I did have some slight leaking issues. You definitely do need plenty of cotton at the top of the recesses in the deck since that is the only thing stopping the juice reaching the air hole.

Unlike a lot of other tanks the Fuji has no juice flow control but due to the nature of its design it simply doesn’t need it and I had no wicking issues at all when using Yorkshire Vaper Butterscotch Custard which is mixed to a ratio of 80VG/20PG. You don’t tend to get any air pockets forming either when using high VG unlike the Coil Art Mage GTA since there is plenty of space between the main chamber and the glass tube.

The top filling makes things very convenient and there is plenty of space for your juice bottle nozzles or droppers but do make sure the top cap is completely secure when screwing it back on.

I initially filled the Fuji with some Kings Crown Claim Your Throne E-Liquid and I personally thought the flavour was pretty good. I don’t think it will blow your mind or anything but what is nice about it is that you can detect individual notes in the juice. Since I received the Mage GTA for review at the same time I felt that the Mage had the Fuji beat in terms of pure in your face flavour but in my opinion the Fuji seems more of a refined vape and you get a wider range of notes so in fairness it will entirely depend on what you prefer.

However if you go with a fairly low Resistance build and ramp up the Wattage the flavour on the Fuji improves and certainly comes much closer to the Mage.

Vapour production was brilliant and the Fuji puts out some very dense clouds (not lunatic Smok TFV4 levels mind you) even when the airflow is heavily closed down! One thing that is worth pointing out is that vaping on the Fuji can be a rather noisy affair and the airflow when not fully opened up can sometimes sound extremely wheezy like some sort of chronic asthmatic which personally didn’t bother me that much but it could potentially irritate your significant other. On the bright side of things at least it never sounds like the old Tobeco Turbo with its ridiculously amusing kazoo sound!

You might think that the upper airflow would be rather redundant unless you are doing very low Resistance builds and vaping at high Wattage but funnily enough when using low Wattage builds 0.8-1.0ohm I actually found the tanks overall flavour improved significantly when I had the upper airflow completely opened up and the bottom airflow only ever so slightly open. It sounds like something of an oddity but depending on your build and the Wattage you vape at those two bottom airflow slots can really wash out the flavour heavily when completely open.

The Fuji really seems to come into its own when you use a fairly low Resistance build (I finally settled on 0.4ohm Clapton coil) and crank up that Wattage because flavour became much more pronounced and the very open airflow helped to keep the heat at a comfortable level!

Overall the wicking seemed to keep up until you really push the Wattage a bit too far or use very thick juice but perhaps that was due to my cotton wicks being a little on the long side. I’ve actually tried a few juices in this tank, Manabush Powwow Sauce, Bunkr Apple Strudel; Yorkshire Vaper Butterscotch Custard and Kings Crown Claim Your Throne and I certainly enjoyed vaping all of them in the Fuji!

The only real negative is that the tank can seriously guzzle your juice and if you should decide to run it with the bottom and top airflow fully opened up it drains even faster. Apart from the one time when I didn’t use enough cotton I can’t say I encountered any major leaking issues when using the Fuji. On occasion I have noticed the odd droplet near the airflow slots that was easily wiped away with a tissue when I have been a little over zealous filling it but never anything serious. 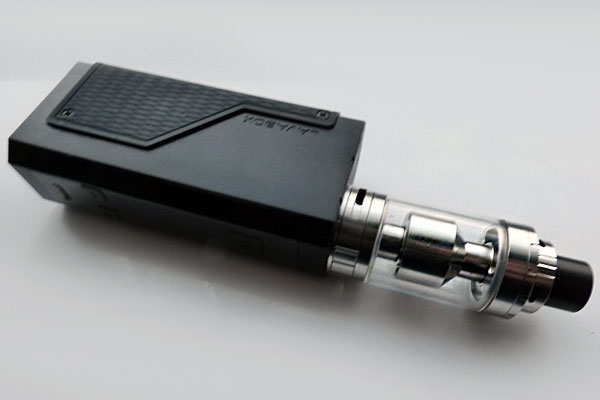 The Digiflavor Fuji GTA is a very well-built product that is fairly straightforward to coil and wick and it delivers good flavour and excellent vapour production with its only noticeable negatives being the fact that the drip tip is not a standard fitting so not easily replaced (an included 510 drip tip adapter would have been nice) and the rate at which the tank devours your juice. Another concern is the fact that you can’t easily tweak your build without draining the tank (you can if you’re really careful but it might get messy). Yet despite these minor issues I really enjoyed using this tank!

If you are looking for a new tank then the Digiflavor Fuji GTA is certainly well worth checking out.