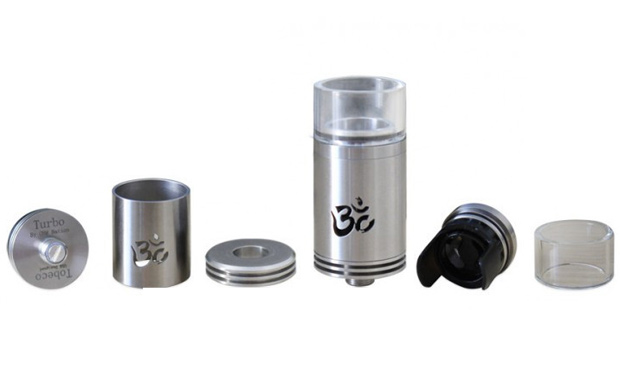 Introduction to the Tobeco Turbo RDA

The Turbo RDA designed by Ohm Nation in the USA and manufactured by Shenzen Tobeco Technology Company Limited who are based in Guangdong, China.

Tobeco manufactures many products varying from RDA's (Rebuildable Dripping Atomizer) to mechanical mods, however the vast majority of its wares are typically clones of other manufacturer's designs. The Turbo diverges from that trend and is a fully authentic RDA.

The most unique feature of this RDA is that it incorporates a turbine fan into the top cap of the atomizer which is designed to help boost airflow and vapour production. A RDA of this nature has never been seen before but is it truly a game changer or something else entirely? We shall see.

The Turbo comes smartly packaged in a gold coloured box. There is an included safety card which states the following:

This turbine is made of polycarbonate, highly acidic juice is known to breakdown the composition of this material. Please use with care and at your own risk.

In all respects this is rather nice looking RDA. The heat sinks make it appear slightly similar to the Vulcan RDA but once the pyrex drip tip is fitted to the top it looks very unique. This RDA does not have conventional air holes instead it has the Hindu “OM” symbol laser cut into both sides of the atomizer.

The RDA was thankfully completely free of machine oil but I gave it a wash anyway just to be sure.

The pyrex drip tip is nicely smoothed off and the one I received had no sharp edges.

The RDA breaks down into three parts. The one piece base heat sink and deck, the main body or barrel with the laser cut air holes, the fan/turbine mount and the pyrex drip tip. If using your own drip tip and the adapter it's four pieces in total.

The fan/turbine mount has two prongs or fins that protrude down and by rotating this piece they control the airflow.

The first build I put in this was a single coil 0.4mm Kanthal wrapped around a 3mm screwdriver which came out at 0.8 ohms. I know this RDA is for dual coil use but sometimes a dual coil focused RDA can still be acceptable with a single coil. It wasn't a bad vape and quite reasonable in terms of flavour but vapour production wasn't particularly good.

My second build was of course dual coil. Two coils of 0.4mm Kanthal wrapped once again around a 3mm screwdriver and the final resistance came out at 0.5 ohms.

The coils were wicked with Japanese cotton. I did tests on my iStick 30w firing at 30 watts and also on my Sigelei 100w+ firing at wattages between 35-65 watts.

Well if I'm being totally honest its not actually a bad vape at all. I've tried far worse RDA's in my time, flavour is average neither amazing or appalling, vapour production is very good clearly it is getting some help from the fan in circulating the vapour which you notice is more wispy and less dense at times. For all concerned Turbo is purely a marketing name and it does not seem to draw in more air like some car turbo charger so don't go expecting miracles from something that works as a simple fan. If you honestly believe its drawing more air in there then you are kidding yourself, personally I think the fan and the noise produced contributes to some kind of placebo effect that tricks you into thinking its doing a better job than it actually is.

With the airflow wide open and the glass drip tip on top its a very noisy RDA. It has been described by many as a kazoo but its like a really irritating whizzing sound. In some respects it reminds me of a dive bomber in some old war film. It will certainly not go unnoticed, you can trust me on that. I suspect it will also cause many a evil look from your significant other if vaping this while watching television together.

On the other hand there is a certain amount of fun filled amusement about the thing and perhaps it could be useful as an ice breaker at parties or good for a group laugh at a local vape meet, it really depends a lot on individual temperament. I definitely do not recommend using this in a crowded public place since the last thing we need is some newspaper article claiming a e-cig causes noise pollution.

Although it may sound like I'm being quite hard on this product it does actually do some things well. Having the fan makes for an almost effortless vape, you certainly do not need to lung inhale like a lunatic to get big clouds. In fact the RDA actually works much better if you adopt a slower and far more gradual draw.

As stated it does produce a lot of vapour but I don't feel its significantly much more than any other RDA with a huge chuff top although it certainly does fog the room up if you are chain vaping away on it.

Closing down the airflow to half reduces the noise annoyance to a tolerable level and closing down by three quarters almost reduces it to nothing.

Fitting the 510 adapter and a standard drip tip also reduces the noise significantly.

It occurred to me that the fan may actually help to cool the vape if running a build at very low sub ohm. I tested this by building a 0.2 ohms dual coil (if trying this kind of build be safe and know your mod, batteries, device and Ohms Law) and cranking up the wattage to 85 watts. I found the vape far more tolerable than other RDA's when used at a similar wattage, still very warm but acceptable. So perhaps in some respects the fan actually does serve a useful purpose. Something to consider certainly.

In regard to safety I would keep an eye on that fan because with wear and tear it may eventually come loose over time. It won't be a problem if you're using the supplied 510 adapter but when using the wide pyrex drip tip it could easily end up in your mouth should the worst case scenario occur. Also take care with the pyrex drip tip.

To be honest when I first saw this RDA my thoughts were pretty negative. I considered it to be a pointless gimmick. In some respects it still is. However in its defence it is a very well made RDA. The screws are good, the post holes are large enough to accommodate most builds and the well capacity is generous.

It's very easy to build due to plenty of room, the flavour is reasonable and the annoying noise can be reduced to an acceptable level. With the fan to help it makes for a comfortable/effortless vape that will produce pretty good clouds and for very low sub ohm builds it seems to help with a slightly cooler vape.

I feel that someone who is quite open minded and doesn't mind spending a little on something a bit wacky and different might get a lot of enjoyment from this RDA, its quite easy to appreciate its uniqueness.

However we choose to judge the Turbo, Tobeco should be commended firstly for starting to move towards authentic, reasonably priced products and secondly for at least trying to produce something different in a world of very similar looking RDA's. The design is certainly innovative and may promote other manufacturer's to come up with fresh ideas. It's an interesting enough and well made RDA, but won't be for everyone.