The Merlin Nano is not a new release as such, so when Vape Sourcing offered it for review I was a little puzzled. Admittedly, this is not a tank that caught my attention and I was never tempted to buy one, so why, out of all the products, did Vape Sourcing pluck this one out? Did they know something I didn’t?

As it turned out they certainly plucked a gem out, though my scepticism stayed with me all the way until my first vape with it. Three weeks on and I still can’t put this little beauty down. Come with me on my fantastic magical journey – okay a little far-fetched, but read on to find out why this buried my scepticism.

Please note, there’s a high chance that I will be bitching and moaning along the way but this all comes with a happy ending (That’s what she said).

A high end, refined RTA in an affordable bundle that delivers superb flavour and equally superb airflow. One of the best MTL RTAs I have tried. 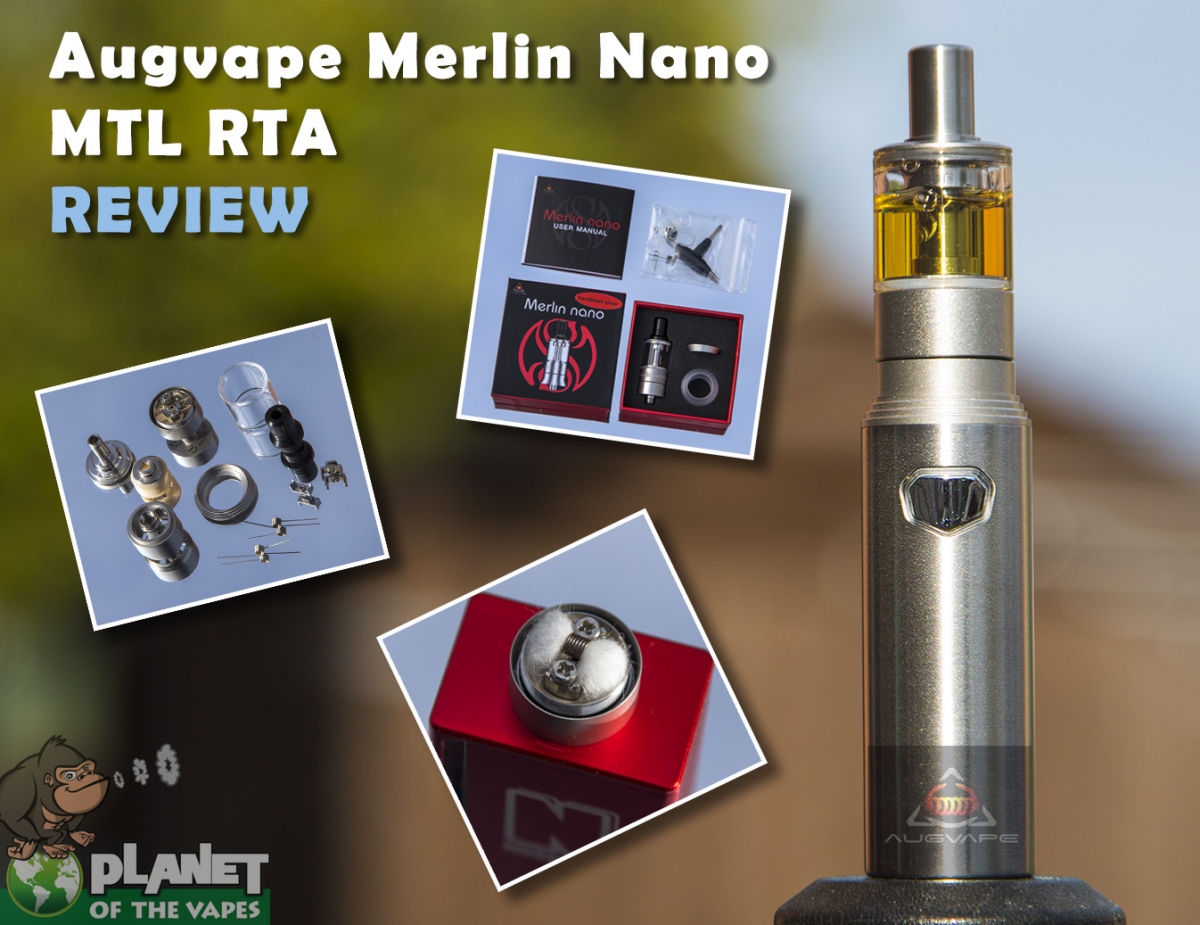 As you would expect for an 18mm tank, the box is quite compact and minimalist. The artwork is really nice with a glossy embellished print. On the back is a list of the contents with a QR Code and scratch off panel (one day I will actually test one out). There is also a wealth of bonus tiny little symbols that I’m confident nobody will pay any attention to. Without my reading glasses, one looked like a NO HORSES symbol, but to my disappointment it turned out to be a ‘DO NOT SET ON FIRE’ warning.

Opening the box up by shaking it (no notches) and picking up the contents off the floor, you are greeted with the entire contents. Apart from the tiny 18mm diameter, you get an idea of the scale when looking through the parts baggie with the baby coils and tiny airflow inserts.

The fold out manual is very nicely put together with clear diagrams. 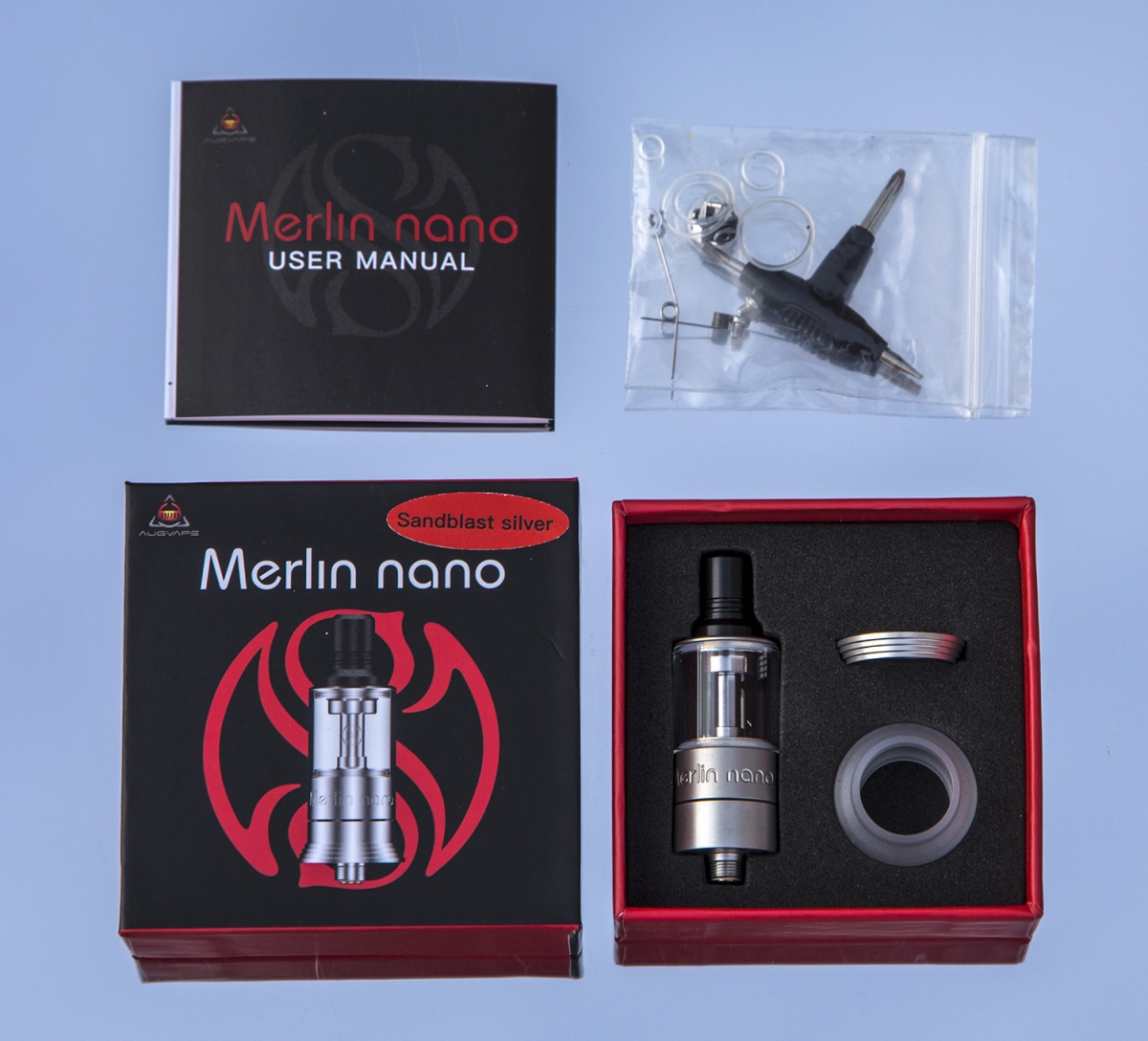 I was sent the ‘Sandblast Silver’ option, not my first choice as I like shiny silver. It is the first time I have owned a sandblasted finish RTA and I actually really like it. It might sound daft, but it looks more expensive, though I am more than likely to buy a ‘spare’ (cough cough) and I can get the SS one too! 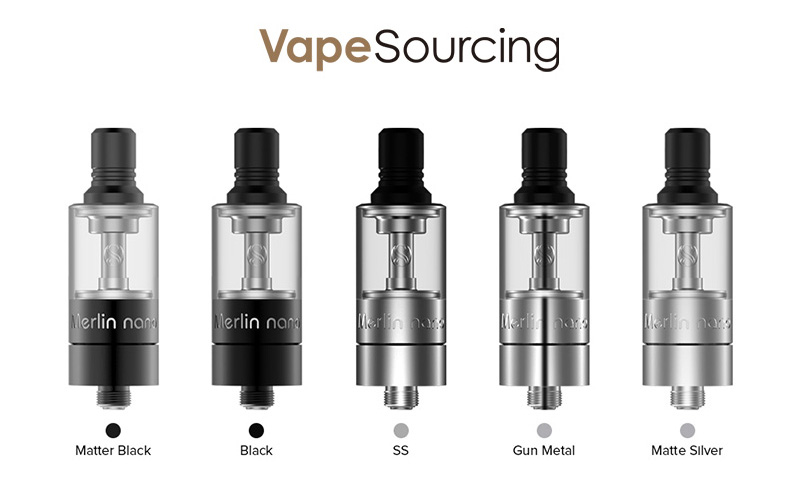 The tank itself strips down pretty easily. Bear in mind I was going into this without much optimism, naturally I was looking for the cons and the first one for me was the ‘Traditional’ old school bottom fill. There’s no convincing me that it is a good thing and it is certainly not a feature. That, aside the construction, was interesting with the peek chamber and insulated deck. The drip tip, top cap, glass and connector fit together and stay together (for the kids), they only need to be stripped while cleaning. The lower assembly is all loose fitting until you screw it onto the top section (via the connector).

The airflow insert is a simple press fit with no way of securing it other than the silicone seal holding it in place. This wasn’t a very tight fit at all on mine, and I was initially concerned that it could come loose and short circuit the coil, though in reality it hasn’t caused any issues at all. The inserts are tiny so can be a little fiddly to fit. I strongly suggest you do this over a table or tray to catch the insert if you manage to drop it. 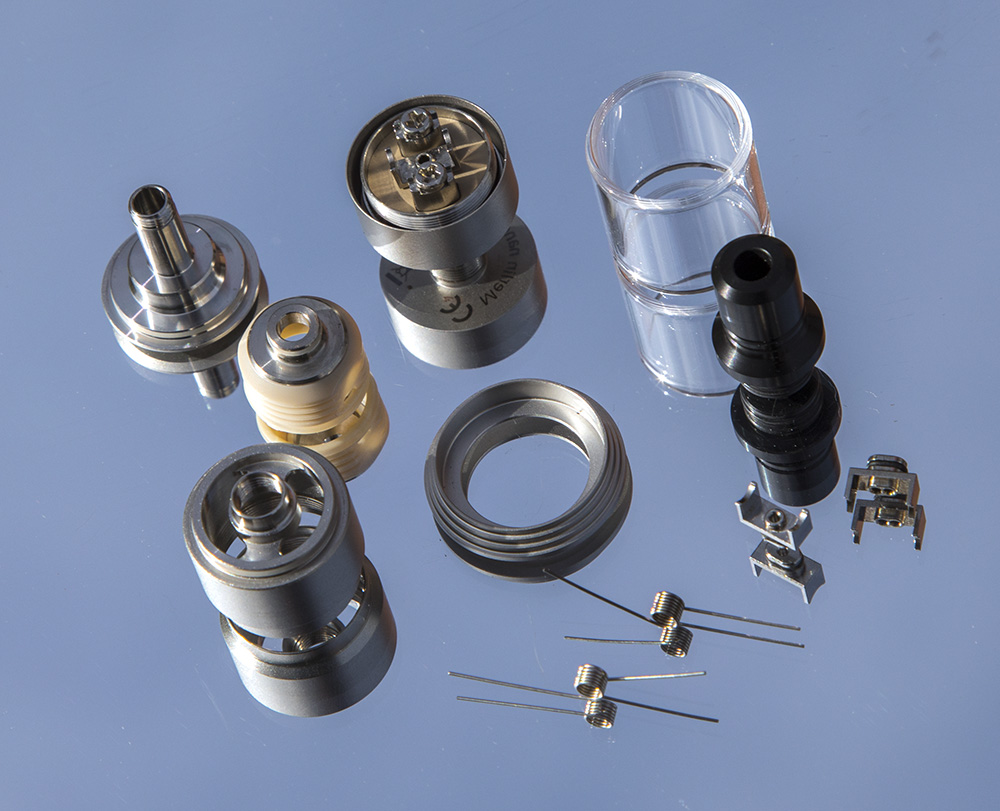 Before I go into the construction, I will address the ‘big fat ugly elephant’ in the room, and that is the hideous ‘bubble glass’ or bubble PEI as it were. It’s not that I dislike bubble glass, they are a necessary evil in some cases (cloud chucking juice guzzling tanks), and in fact in proportion they can even look better, but this is NOT the case for the Merlin Nano.

A picture speaks a thousand words: 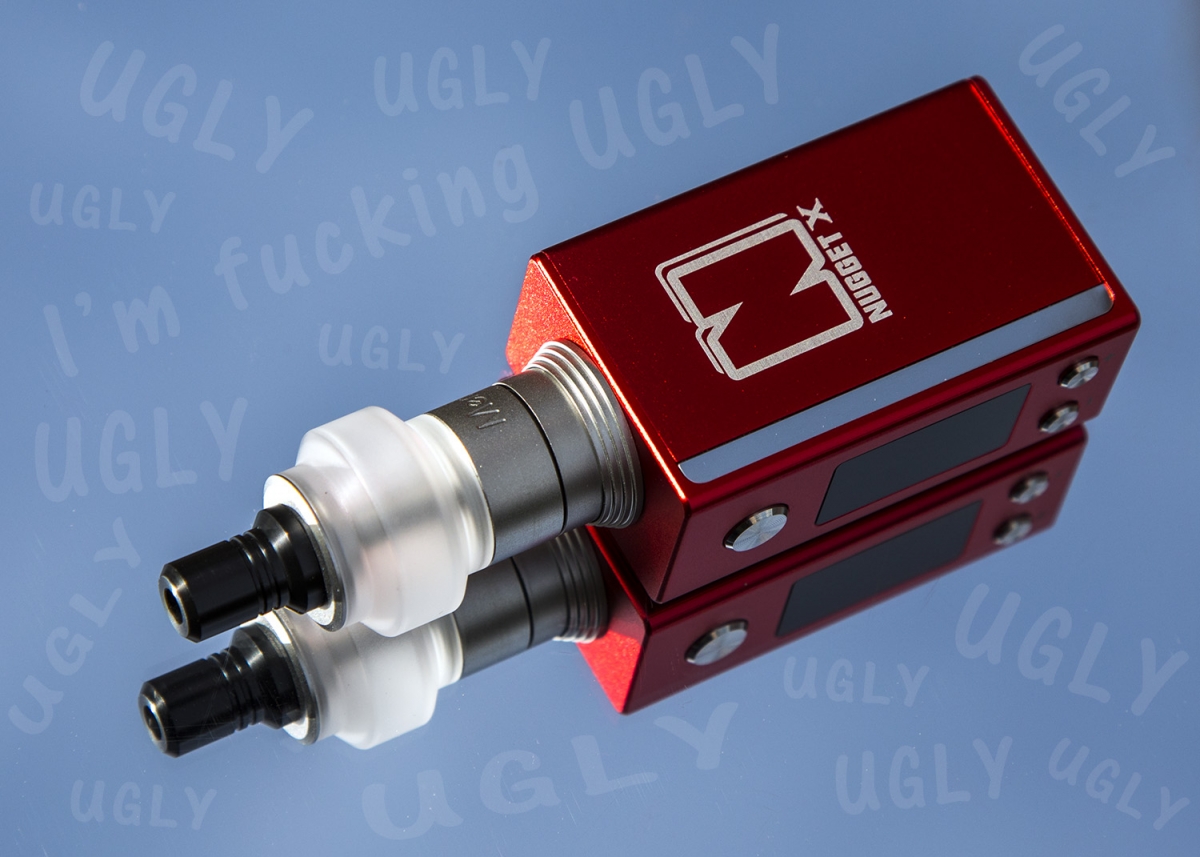 If anybody actually likes this option then please accept my sincere apology “I’m sorry that you like this”.

I would have preferred a spare straight glass instead. As it stands, if I break the original glass then I can no longer vape out in public using the bubble glass ☹

One last gripe about the looks before I get onto the build and performance (I promise it gets better after this), the 510 Drip Tip really cheapens the look and feel of the Merlin. Not only that, but one of the options I added actually improved the performance and that was a drip tip from a Wotofo STNG, skinny, highly buffed and comfortable. I’m sat here swapping between the two and I swear the flavour and warmth is much better. Again I would happily sacrifice the fugly glass for an additional drip tip option. 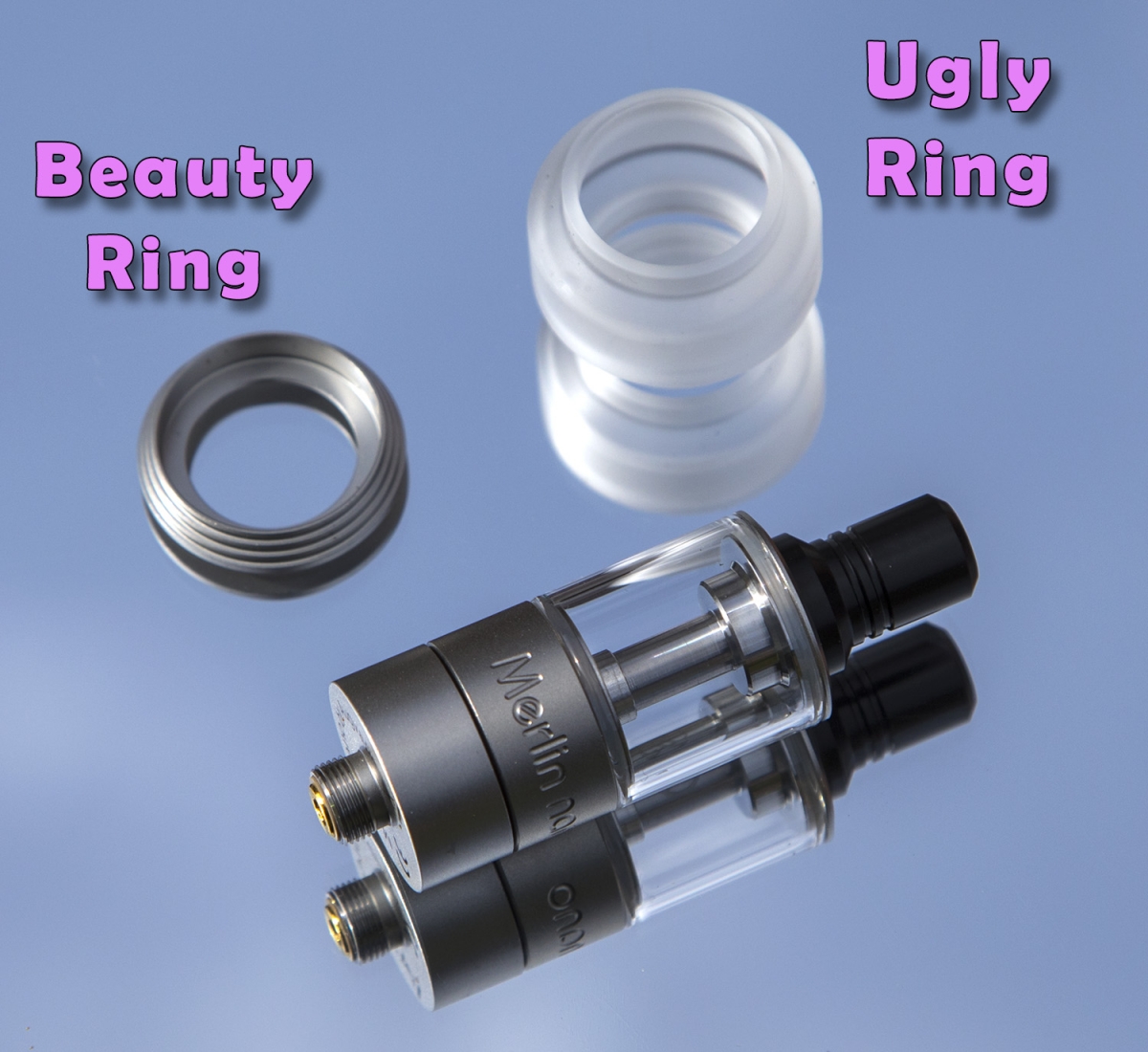 I’m not a huge fan of the build deck style, as fitting coils can be a little hit and miss if the screw doesn’t catch it right, but in this instance I’ve had no issues at all. The provided coils are wrapped in the correct orientation and the notches at the side of the screws are perfect for catching the lead. 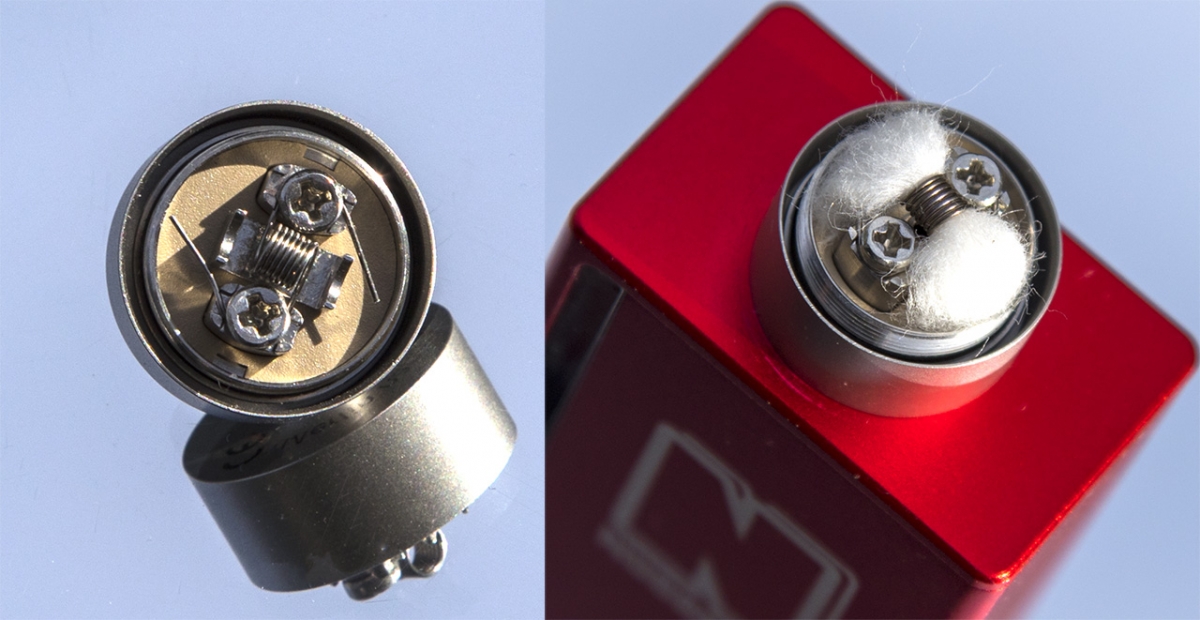 In fact this is one of the easiest screw clamp decks I’ve built on, the notches to hook the excess leads work really well and it is also very easy to trim the legs after. I ever so slightly spaced the coil and raised the height a little further up than the notches than the airflow plug suggests. This turned out to make quite a difference in flavour and airflow, so it is worth having a play with the height, though if you go too high you could cause a short circuit.

Wicking was a little deceptive. My first attempt turned out to be a little too long which only became evident when you fit the peek chamber as it traps and squishes your cotton, so be aware of that. I was surprised how little wick it required and it has not leaked at all. Once that is done, then saturate your wick and coil then pop on the PEEK Chamber. This is achieved by two tiny tabs lining up on the build deck base, if they don’t seat right then there’s a chance your wick is too long.

So before you go and screw it all together, you will need to fill it up first. Remember it is bottom fill so you need to grab hold of the top assembly, turn it upside down and fill from the inside kidney ports. This is easier said than done with some bottles as the ‘connector’ section is quite deep and can make it awkward to get your tip in (that’s what she said!). Once filled up to the glass portion, and no more as it will simply spill out of the drip tip, then you will need to screw the build deck and peek chamber onto the tank (still upside down) and that’s it, ready to vape. 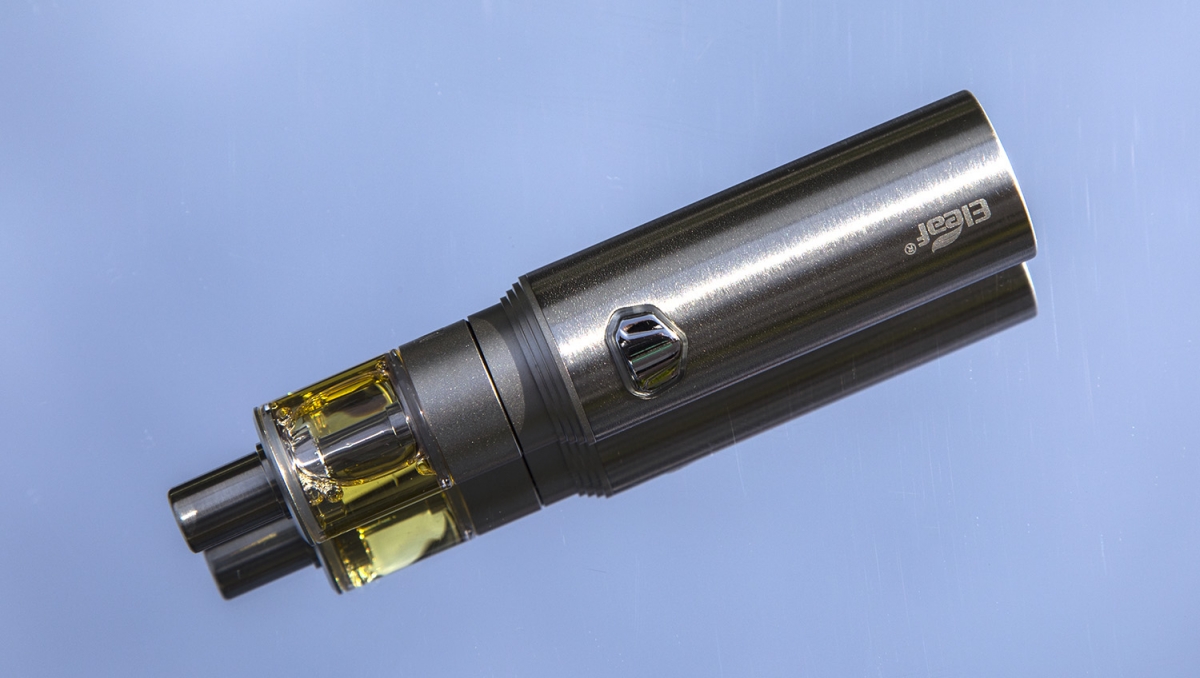 You’ve already heard my opinion on the bubble glass so let’s pretend that it doesn’t exist. I couldn’t live with the drip tip despite it being styled to match the tank. Besides that, for such a minimalistic outside design, this RTA just looks so damn good. I tried it on many mods and just loved how classy it looks. The ‘Merlin nano’ branding suits it and is not overstated, and a tiny etching on the narrow airflow chamber is a nice little touch. With the hidden airflow, there is a tiny gap and finally the 22mm beauty ring is absolutely perfect for the styling with it graduating in steps. This gives you far more options for 22mm mods and even on some 24mm. My favourite was the above setup Eleaf iJust Mini, but I haven’t found too many mods where it looks plain wrong. Obviously colour choice will play a part. 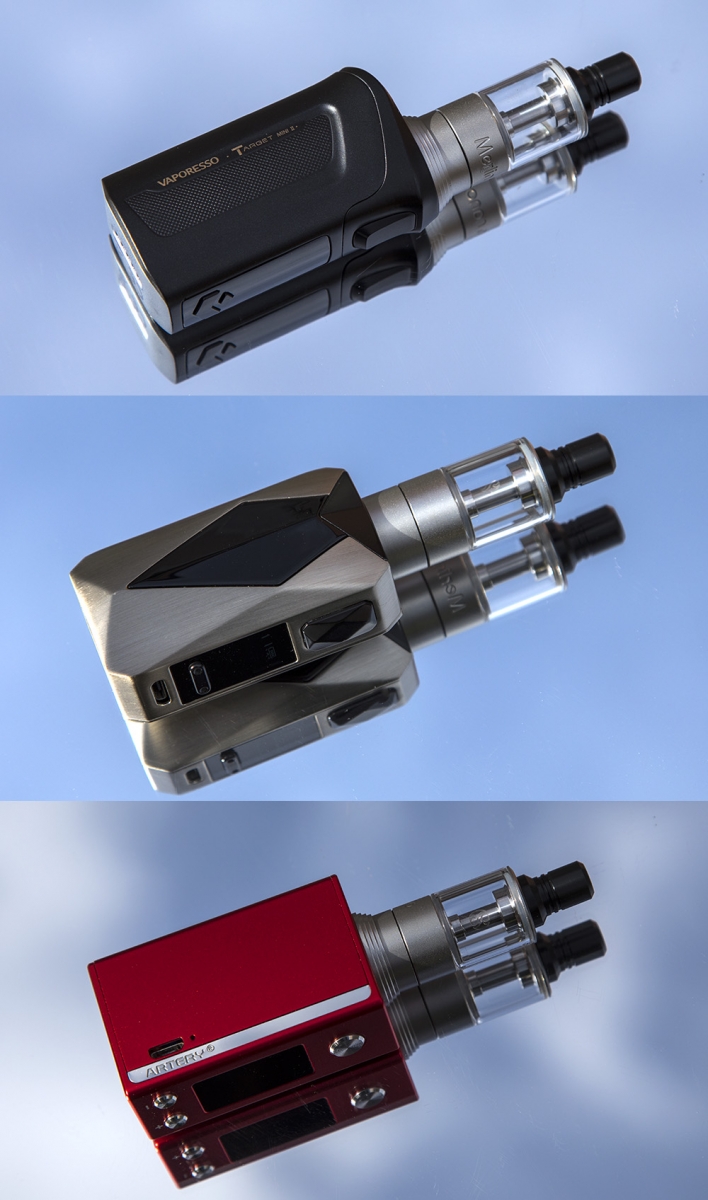 So by now I was starting to like the Merlin Nano despite my previous bitching. Having gotten the photography and building out of the way, it was time to take it for a toot. I have sooo many MTL tanks and thought I already had the best in this price range so my best hopes was for it to be on par.

This is where everything comes together. Not only did it meet my expectation, it exceeded them by far. I went with the 1.2mm airflow option which turned out to be perfect for me, a nice and restrictive draw with very smooth airflow. In bypass mode, you get such a wonderfully smooth, warm, flavourful vape.

Wondering if it was just my imagination with the ‘new toy’ factor, I set about putting it up against my other favourites and, thankfully, it held up and beat most of them, to the point I have since retired many of them. Any novelty factor has been surpassed and this is my current goto MTL RTA. I’m preferring it for 6mg 50/50 freebase juices, namely Manabush Base Zero range which I have recently discovered, and the Merlin Nano MTL RTA is just perfect for squeezing out all of that flavour.

Wicks last well, and I have had no issues at all with leaking or dry hits. It chain vapes nicely (which is the reason I don’t use Nic Salts in it), despite my reservations about the push in air insert, they have never become loose or shorted. I have even knocked it about on purpose to try and provoke it to come loose, but it has remained in place, partly down to the wick keeping it down.

I have been trying to wrap my head around why the Merlin Nano performs so well as I can’t see any real innovation, more a refinement of old school RTAs, I think the peek Chamber helps and the airflow source and direction simply works well.

Despite my reservations, the Merlin Nano MTL RTA has won me over in so many ways but most importantly by the wonderful MTL vape it gives. I am a pure flavour chaser when it comes to MTL, I wouldn’t give a monkeys if it produced zero vapour, and clouds are as you would expect with a 50/50 low wattage setup.

The Merlin Nano is not without its flaws. I simply do not like the bottom fill, not only for the inconvenience but for it being awkward to refill. Pretending the bubble glass didn’t exist, I would still have liked a better 510 drip tip, especially when it alters the flavour. This could be a personal preference, but a very narrow bore drip tip really is the cherry on the icing for me. the flaws are far outweighed by the performance of this superb little RTA.

Would I buy one? f**k yeah and I will be overhauling my fleet to include at least two more, though I might have to play around with the setup a little for nic salts. 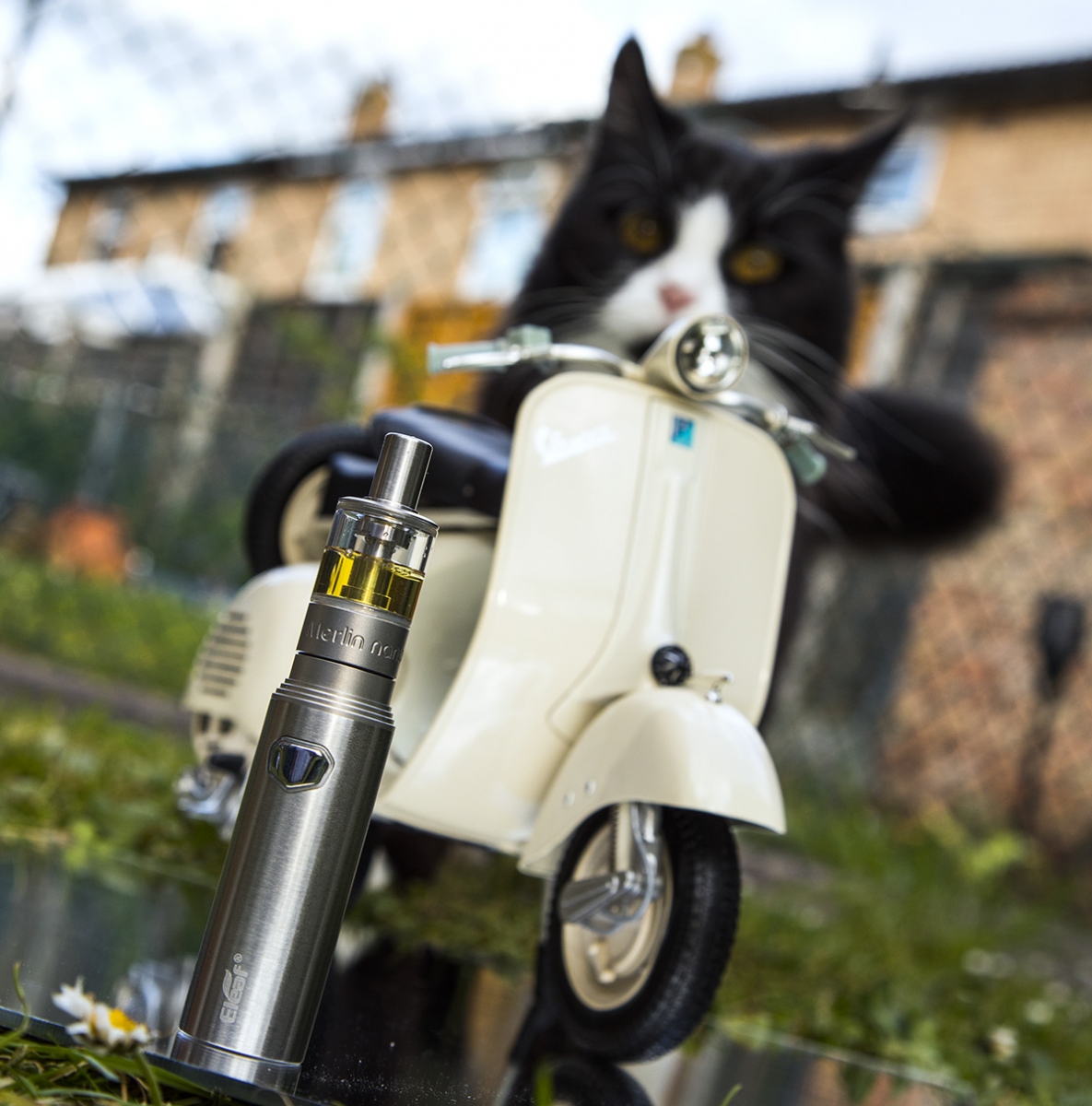