Augvape have teamed up with Mike Vapes for the second of their new RTAs, the Intake MTL. This features top down airflow much like previous Intake tanks but with the mouth to lung market firmly in its sights.

The Intake MTL comes in a small cardboard box with a picture of the rta on the front with the colour denoted by a small sticker. Mine came in gunmetal, but it’s also available in stainless steel and matte black. Inside the box, there’s a small information leaflet, the Intake MTL itself, a bubble glass and a bag of spares. The spares bag also includes four air discs of various sizes, and two MTL clapton coils. 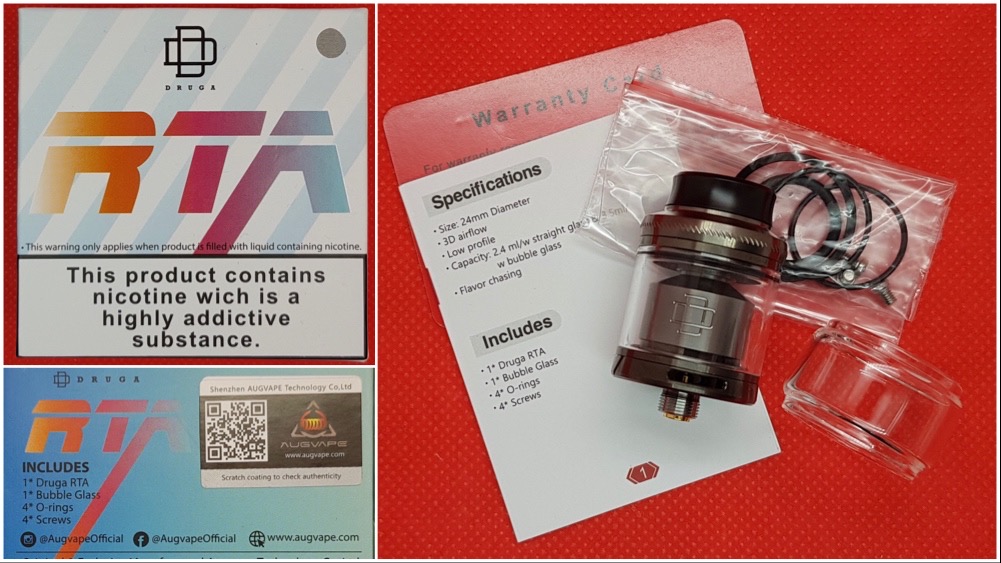 The Intake MTL looks exactly like the original Intake RTA externally and breaks down into six parts for cleaning (seven if you include the air disc). A 3.1ml straight glass comes installed, and there’s a 4.5ml bubble glass included, but as this is a MTL tank I decided to opt for the straight glass.

The base has a nicely protruding positive pin so I’d feel comfortable using this on a mech mod.

The top cap uses the same bayonet style locking mechanism of its predecessors requiring just a quarter turn to open which reveals two decent sized filling ports, this is all sealed with a large silicone grommet. There’s a rather nice MTL style 510 drip tip included which suits the Intake MTL perfectly, I’ve found this very comfortable in use and haven’t felt the need to change it out. 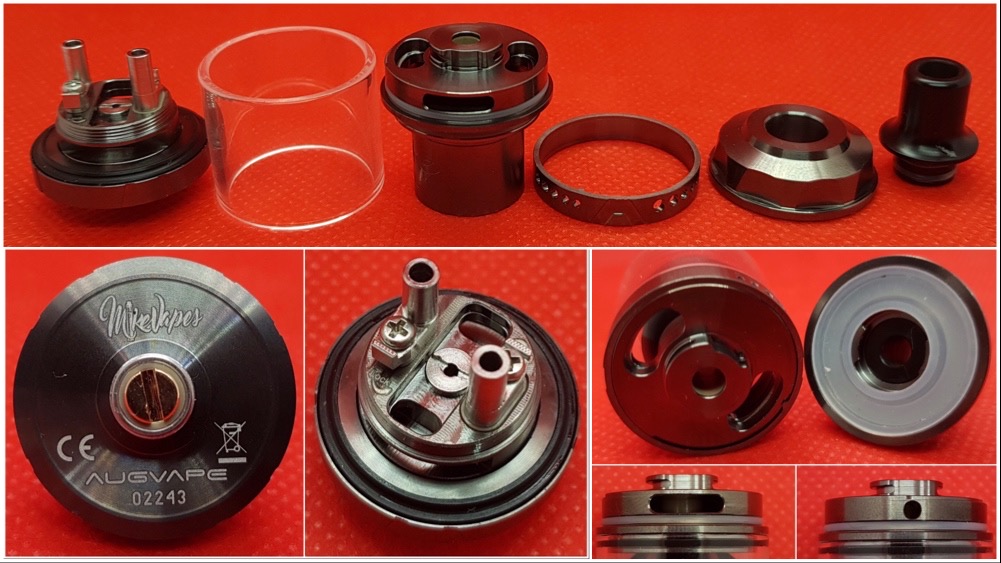 One of the main changes externally is the airflow ring. Rather than wide open cyclops airflow, there are now five smaller airflow holes, these match the size of the included airflow discs (more on that later). The airflow is also double sided, on one side you have a wide open cyclops airflow giving five different options, on the other there’s a single hole giving a further five options, this really allows you to set the airflow to your liking but of course the biggest restriction is always going to come from the underside of the coil.

The deck has the two air tubes coming down from the top airflow and redirecting the air under the coil, this time though there’s a threaded hole for the airflow discs rather than the wide open airflow on the original. The supplied discs are 1.0, 1.2, 1.4, 1.6 and 1.8mm diameter, and there’s also the option to leave them out entirely which gives you a 3.7mm option if you want to try and do a restricted direct lung vape. Coils are clamped down with Phillips head screws, but bizarrely these have bee reverse threaded. I watched Mike Vapes introduction video, and apparently this has been done to stop the deck moving around when installing coils, it didn’t work and worse if you’re not paying attention, it tends to try and spit the leads out and distort the coil when tightening the screws so make sure you use a coiling rod! 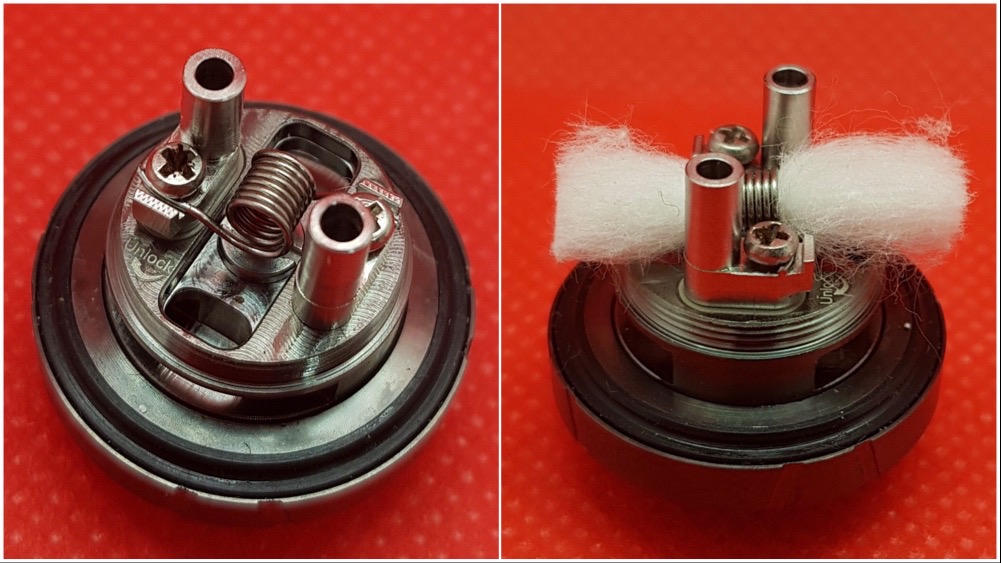 The included clapton coils are nichrome so I didn’t want to use them due to my nickel intolerance, so I settled on a simple 2.5mm round wire kanthal build which came out to 0.8Ohms. It’s best if you wrap your coils anti-clockwise thanks to the deck design, but you could always install the coil belly down and simply lift the coil up a little if you have a pre made clockwise coil. Wicking was simple, I simply cut to the edge of the deck, gave things a light comb out and tucked the wicks into the wicking ports. As before, it’s a slightly raised gta style deck.

The 1.4mm air disc is installed in the deck from the factory and I left this in place and I found three things with this setting. First up, I didn’t like the eliquid I had chosen (I hadn’t used it before), then it was a little too tight for my liking as I prefer a slightly looser MTL vape, and there was a slight whistle if I used the 1.6 and 1.8mm airflow holes on the top single hole setting. Lesson learned, I took the build back out and changed up to the 1.6mm airflow disc, sadly these aren’t marked in any way so I had to line them all up to determine the correct one to use! Perfect, nice flavour and the restriction was much more to my liking. You can of course go the other way if you prefer the “sucking a golf ball through a straw” style of MTL vape.

A great update to the original Intake RTA with the mouth to lung vaper in mind and lots of airflow options so you should be able to tailor the vape to your preferred style. Building and wicking is easy once you get your head around those reverse threaded screws on the build deck. This has easily become one of my favourite RTAs for this year, well done Mike Vapes and Augvape.

As always many thanks to Augvape for sending the Intake MTL out for review. 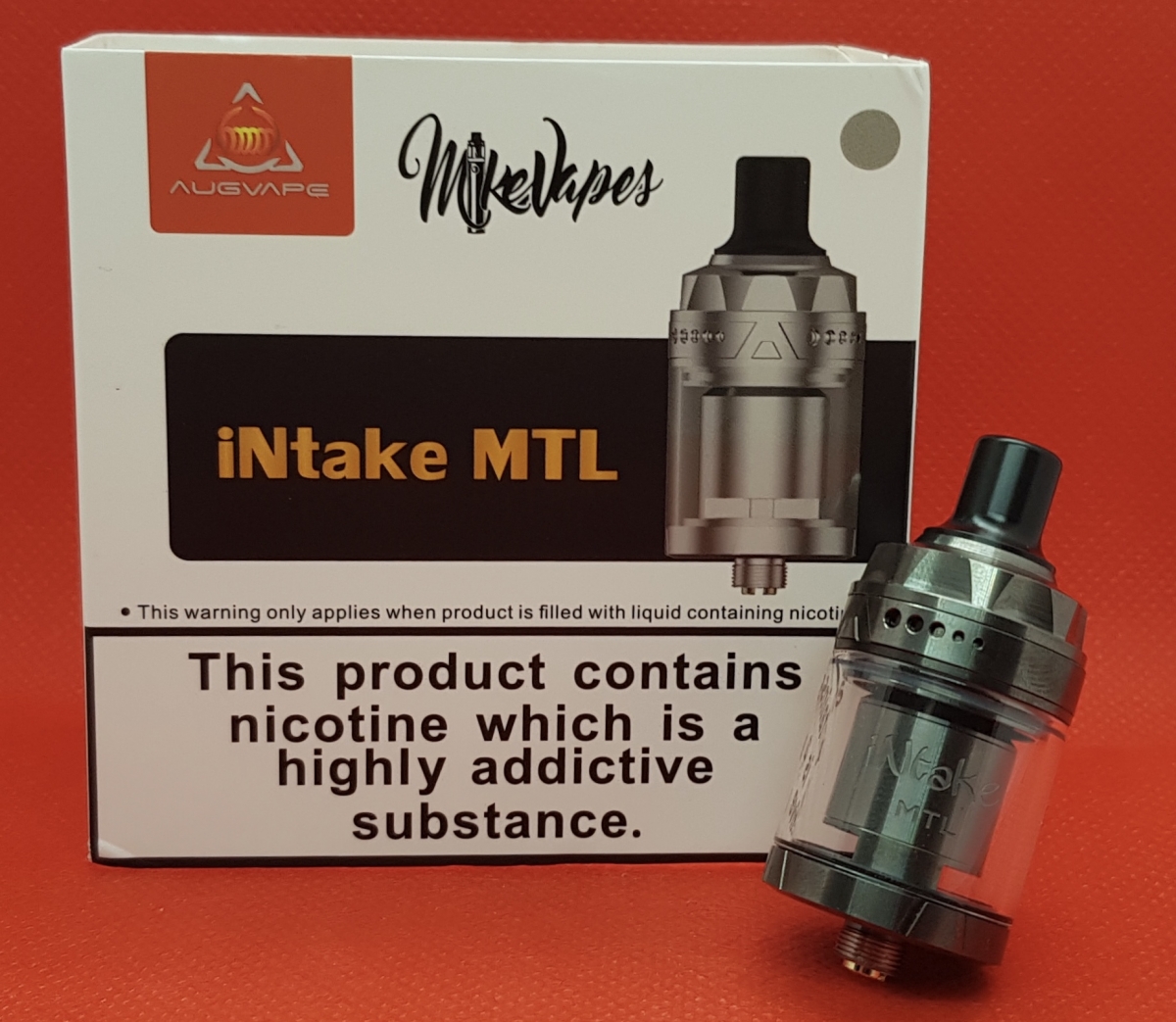