If 2019 was the year of the pod system, then 2020 is starting to shape up to be the year of the mini billet box style kit, and today we have the latest entry in this segment from VapeOnly, the Space mod pod kit, which has been sent over by Heaven Gifts for review. This is the follow up to the VapeOnly mind kit that I reviewed a while back and, whilst I liked the vAir-Mi coils which are also used in the space kit, I found the mind kit itself had quite a few niggles that put me off using it regularly so I was keen to see if any improvements had been made. 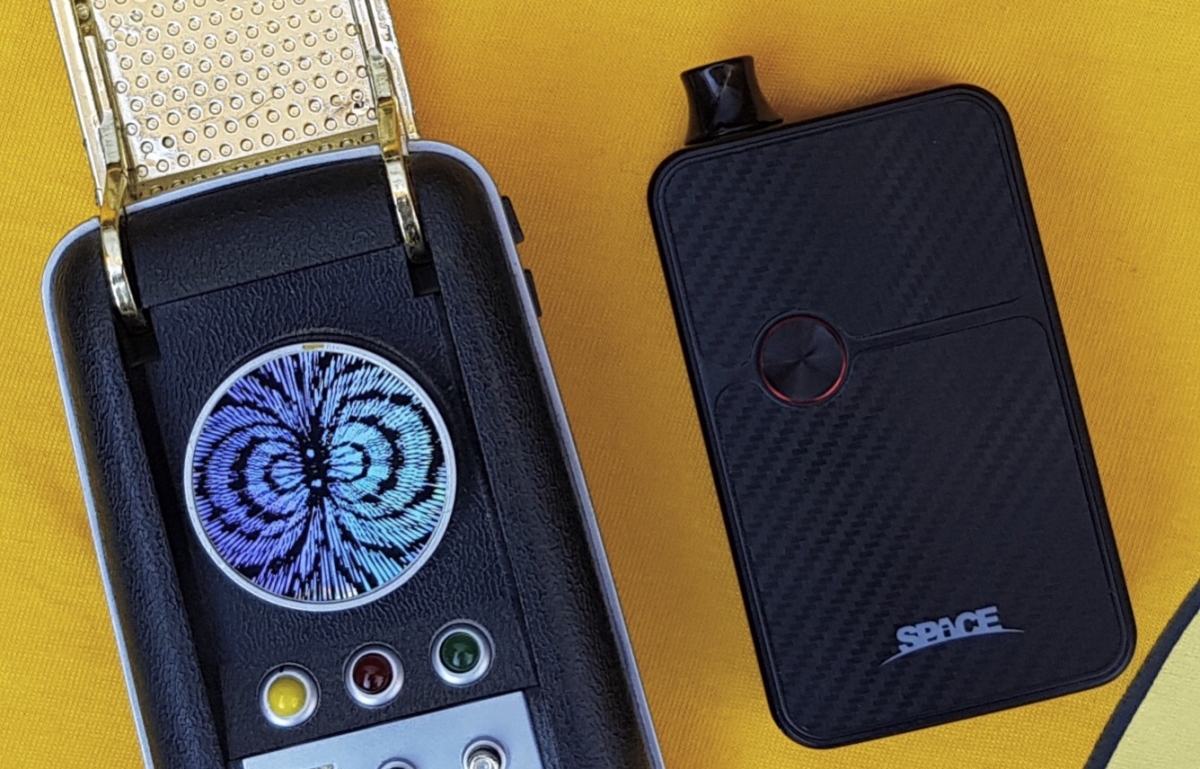 The Space kit comes in a fairly small, high quality cardboard box with the mod in your chosen colour displayed under a clear plastic window. The kit sent in for review has a black frame with “carbon fibre” panels/stickers, several other finishes are available with (p)leather or resin panels to suit your taste. It’s not clear from the photos available online but I would suspect that the “resin panels” are also quite probably stickers as well. Around the back is a list of contents and basic specifications, and VapeOnly logos and website links on the sides. There are no finger cutouts on the box lid so it can be a little tricky to open the box, but once inside you have the mod itself covered in a protective plastic film with a smaller box to the side containing a usb-c cable and a spare coil. Finally on the bottom layer, there’s an instruction manual and a warranty card. 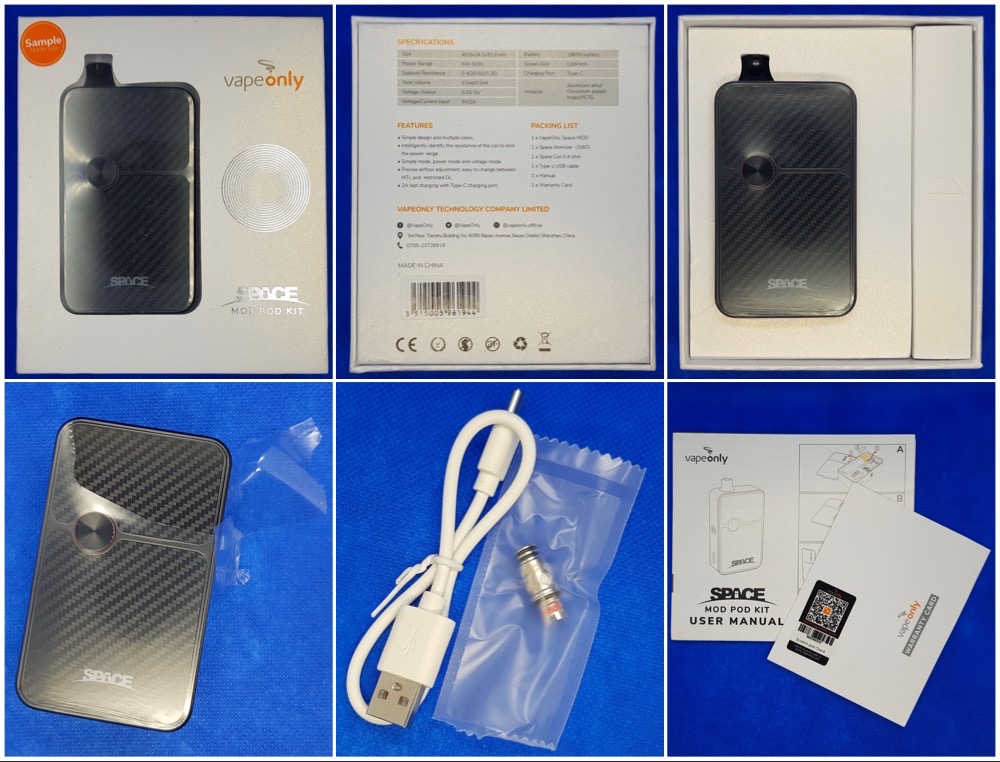 On the left side, you’ll find the power button which is slightly raised up from the rest of the panel and placed roughly one third of the way down from the top edge. I’ve found the button placement particularly comfortable for thumb firing in either hand, and I like the way that the panel has been broken up visually with the two carbon fibre effect stickers along with the space logo on the bottom edge.

On the front, there’s the air intake slot which has a honeycomb design with fifteen holes to smooth out the airflow. It’s position means you do have to be careful not to block it with your fingers as this provides roughly half the available air, but this isn’t something I found myself doing regularly. On the bottom is a usb-c charge port and a small led indicator. The indicator light is cyan and changes to red with a low battery, and I found in practice that the led actually lights up the USB port as well but it generally ends up being covered by my pinky finger so doesn’t get overly annoying. VapeOnly claim 2amp charging with the space kit and, in my test, it spent most of its time around the 1.85amps mark but this did seem to fluctuate quite a bit and I’m not too sure I’m comfortable charging an 18650 at that rate on a regular basis either, so as always an external charger is preferable.

Turning around to the back of the mod, the one third/two third visual split has been carried over to match the front, and there’s a juice viewing window which also contributes about half the available airflow as with similar designs I’ve come across previously. This panel is removable and held on with three strong magnets with a small cutout on the bottom edge to lift the panel from, but more on that later.

The back side is blank, as is the bottom apart from some obligatory CE marks etc. Finally on the top edge, you’ll find a 510 catch cup. The provided plastic drip tip is quite comfortable but you should have no difficulty using your own 510 drip tips if you desire.

The main frame of the mod is aluminum alloy with nice rounded corners and it feels very comfortable in the hand. However, on the side with the removable panel there are a couple of sharper edges near the tab cutouts on the bottom edge and towards the top edge where the panel meets the frame. They’re not sharp enough to cut you though and you won’t notice too much unless you run your fingertips over these areas. 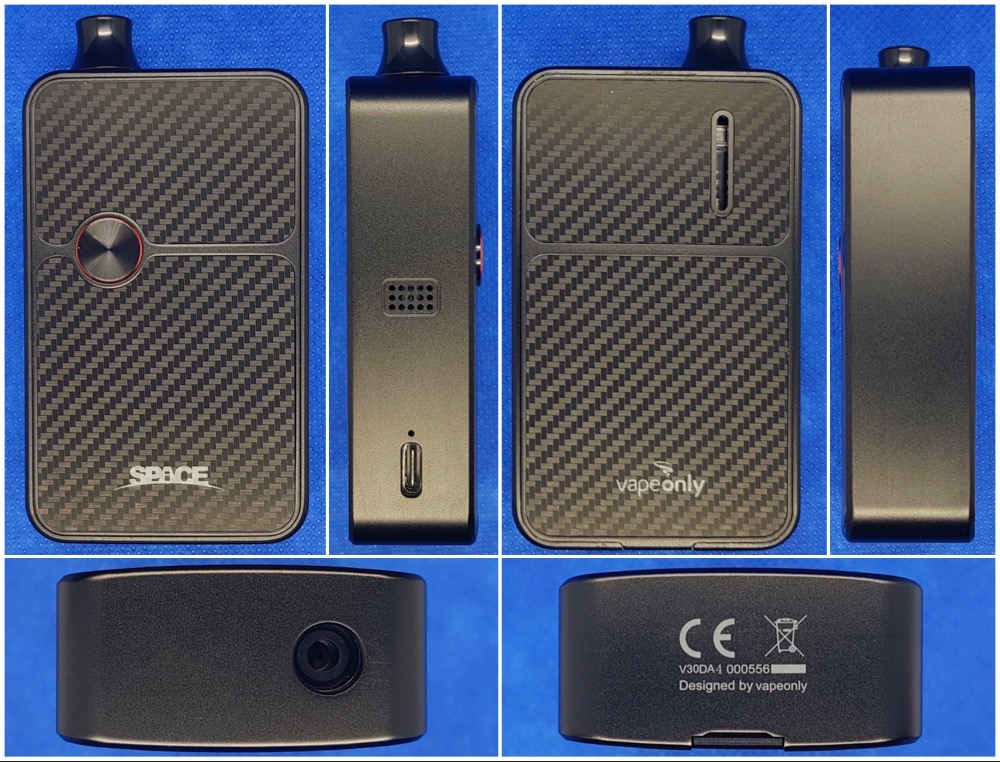 Lifting the side panel reveals the interior of the mod and, although the external chassis and side panel are aluminium, the innards are all plastic. This appears to either be press fit or the screws have been hidden under the carbon fibre stickers on the opposite side although I couldn’t feel any tell tale bumps. It feels like a decent quality and doesn’t feel flimsy like some of the plastics on the VapeOnly mind kit I reviewed a while back.

On the left side is the battery compartment with clearly marked battery orientation and a spring loaded negative contact along with a battery ribbon. Getting batteries in and out hasn’t been an issue and there’s no battery movement either. Over to the upper right side is the compartment for the included pod/tank. This has three spring loaded contacts on the base and a large silicone seal for the chimney to butt up against. Getting the pod in and out is easy and again appears to be held in place well enough with no undue movement. Finally, on the lower right side are the control buttons and the 0.69 inch screen. The buttons all have a nice positive click with no rattle and the screen, although small, is bright and clearly laid out. 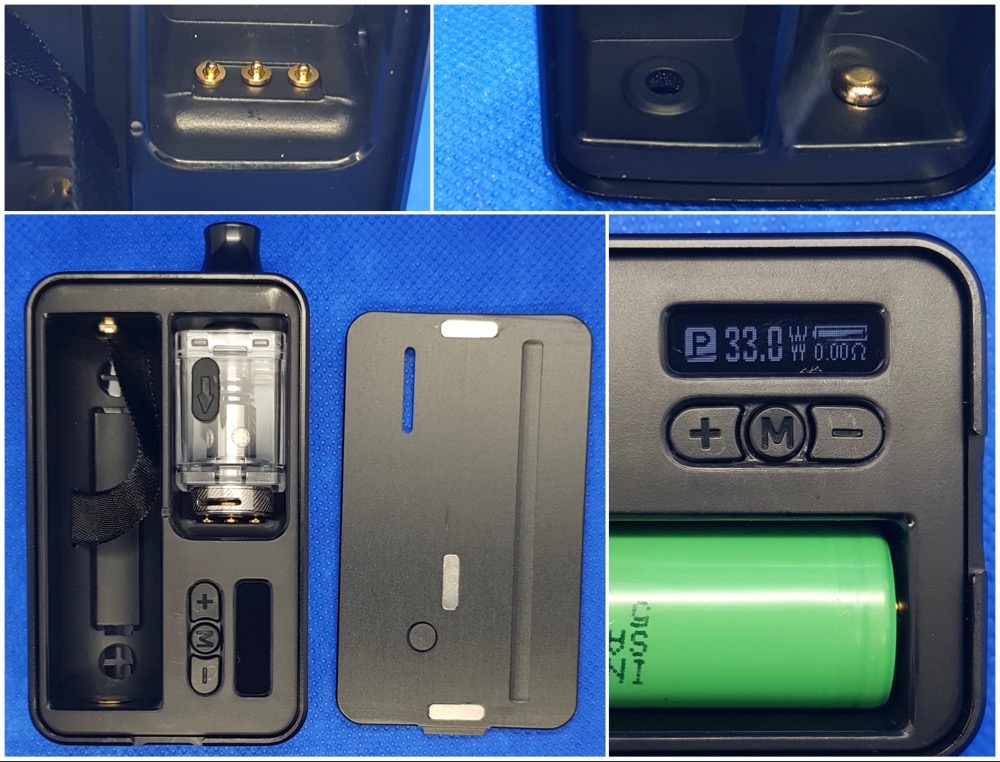 The Space pod kit is turned on and off with the customary five clicks and, after a short boot up sequence, you can swap between simple, wattage and voltage modes as you could with the mind kit.

In wattage mode the full 60 watts is available, but the board also has “intelligent” coil management built in and will limit what’s available based on the coil resistance, maxing out at 38 watts with the 0.4Ω coil and 26 watts with the 0.6Ω coil. It will be interesting to see how this affects use with the rebuildable coil and voopoo, for example, has had to issue updated firmwares for their pod mods to include a rba mode. As with the mind kit, I found that the simple mode was well matched to the coils with its low/medium/high settings and actually ended up using that instead.

One weird aspect with the kit is that it produces a ticking noise for about 30 seconds after you press the fire button. It sounds rather like an analogue wristwatch. I hadn’t noticed that with the mind kit so I tried that as well and found that it does exactly the same thing.  It’s not overly loud though, and I doubt I would have noticed but for being stuck at home in a quiet room due to the current U.K covid19 restrictions. You won’t notice in normal use with the TV on for example. 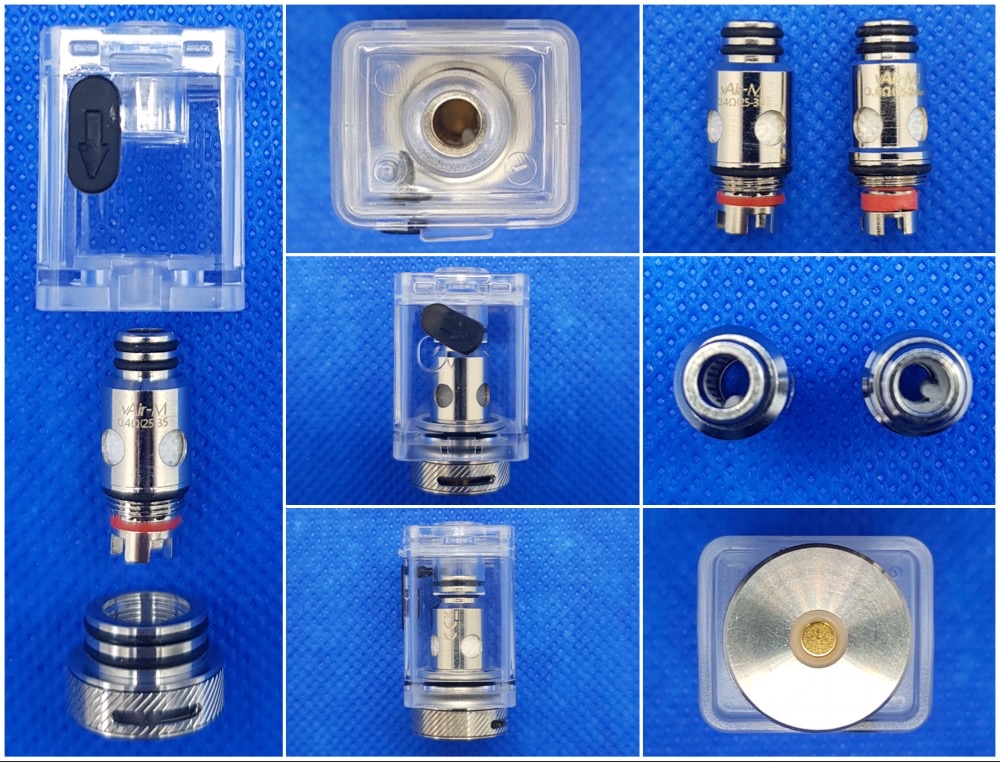 The pod itself holds 3.5ml and is constructed from PCTG so should be resistant to most eliquids, but obvious care should be taken with known tank crackers especially as I haven’t seen replacement pods offered for sale anywhere. It comes with a preinstalled 0.4Ω mesh coil screwed into the airflow base and the whole assembly is press fit in from the bottom. The fill bung is easily removed to reveal a generous size filling port, and it’s nice to see that the bung is quite robust and stands up to daily use unlike the last pod system that I used. It’s still in perfect condition after two weeks of heavy use, but I would still have preferred to see a spare included in the kit as well.

The two included coils are 0.4Ω and 0.6Ω respectively with a kanthal mesh and are definitely geared more towards a restricted lung hit. Both coils produced good flavour and have lasted about a week with fairly heavy use, but I felt the 0.4Ω coil definitely had an edge over the 0.6Ω coil so that would be my pick going forwards.

A 1.2Ω coil is available separately but I did find that this had a tendency to flood when I was using the mind kit so mtl users may wish to look elsewhere. There is one glimmer of hope though as VapeOnly have also announced a rebuildable coil that looks like it’s aimed more towards a mtl vape, but that’s currently not available.

One aspect of the mind kit that has put me off using it much is that the coils get quite hot and transfer heat to the metal 510 catch cup resulting in burnt lips if you’re not careful. The coils still produce a lot of heat which can easily be observed by touching the airflow ring which, again, get quite toasty. Thankfully though, the coil is now isolated from the drip tip entirely which means this is no longer an issue. I was also pleasantly surprised to find with the Space kit there has been zero condensation build up or leaking from the pod, which is often the bane of these types of devices. That silicone seal at the top of the pod recess seems to be making a good seal but again it’s disappointing not to find a spare in the kit. 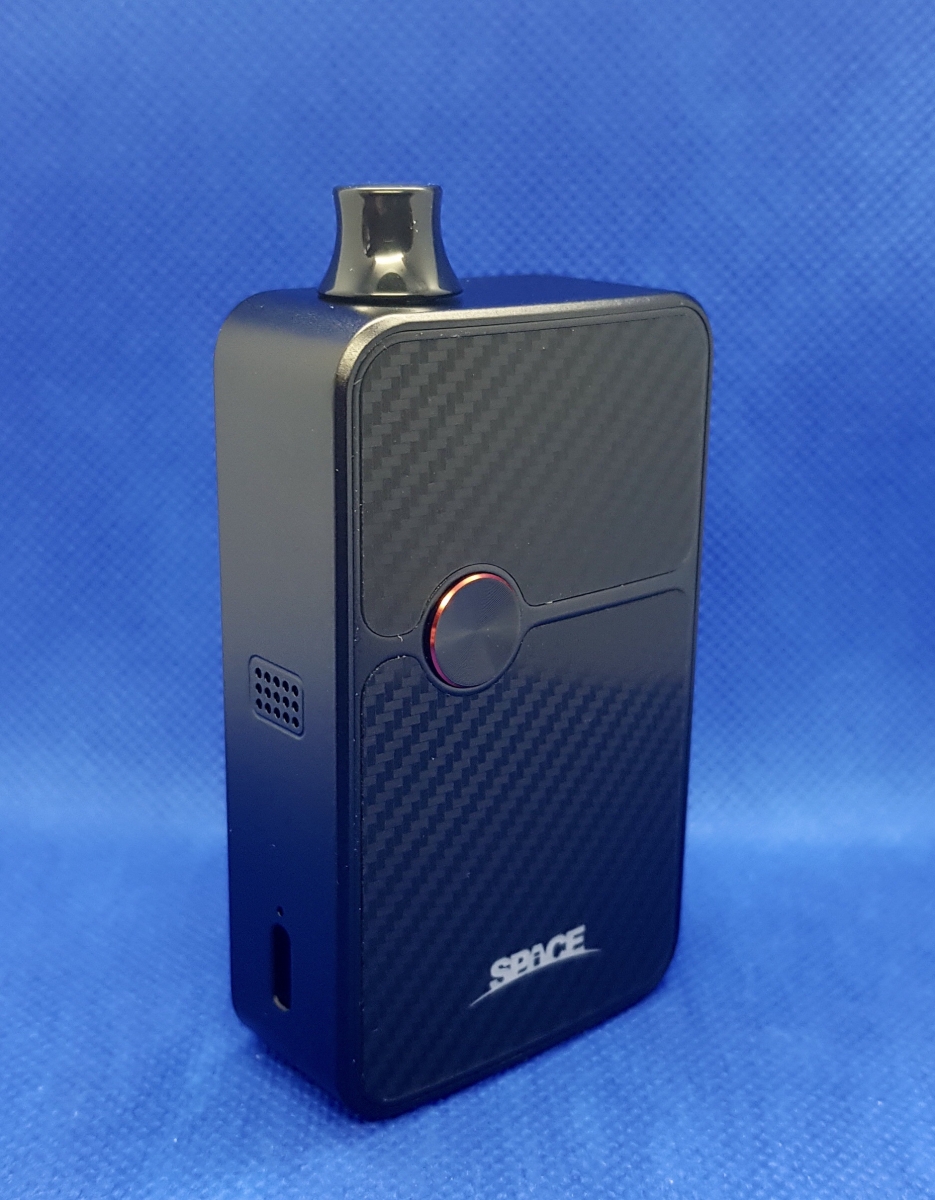 This is a big step up from the VapeOnly mind kit, the Space has hardly left my hands for the last two weeks and I would definitely recommend spending a few extra pounds to get the Space kit instead, it just seems like a much more polished experience all round with many of the niggles that held the mind kit back now abolished. It looks like VapeOnly intend supporting the coils for a good period of time as well as this is now the second kit they have released which uses them, but I’d probably hold out for the rba kit if you’re a mtl user.

As always many thanks to Heaven Gifts for sending the Space mod pod kit over for review. 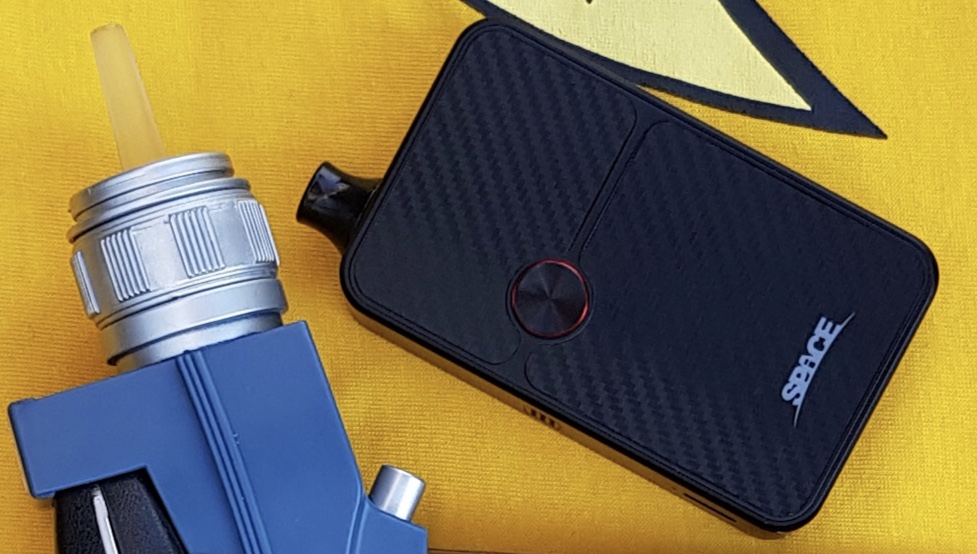