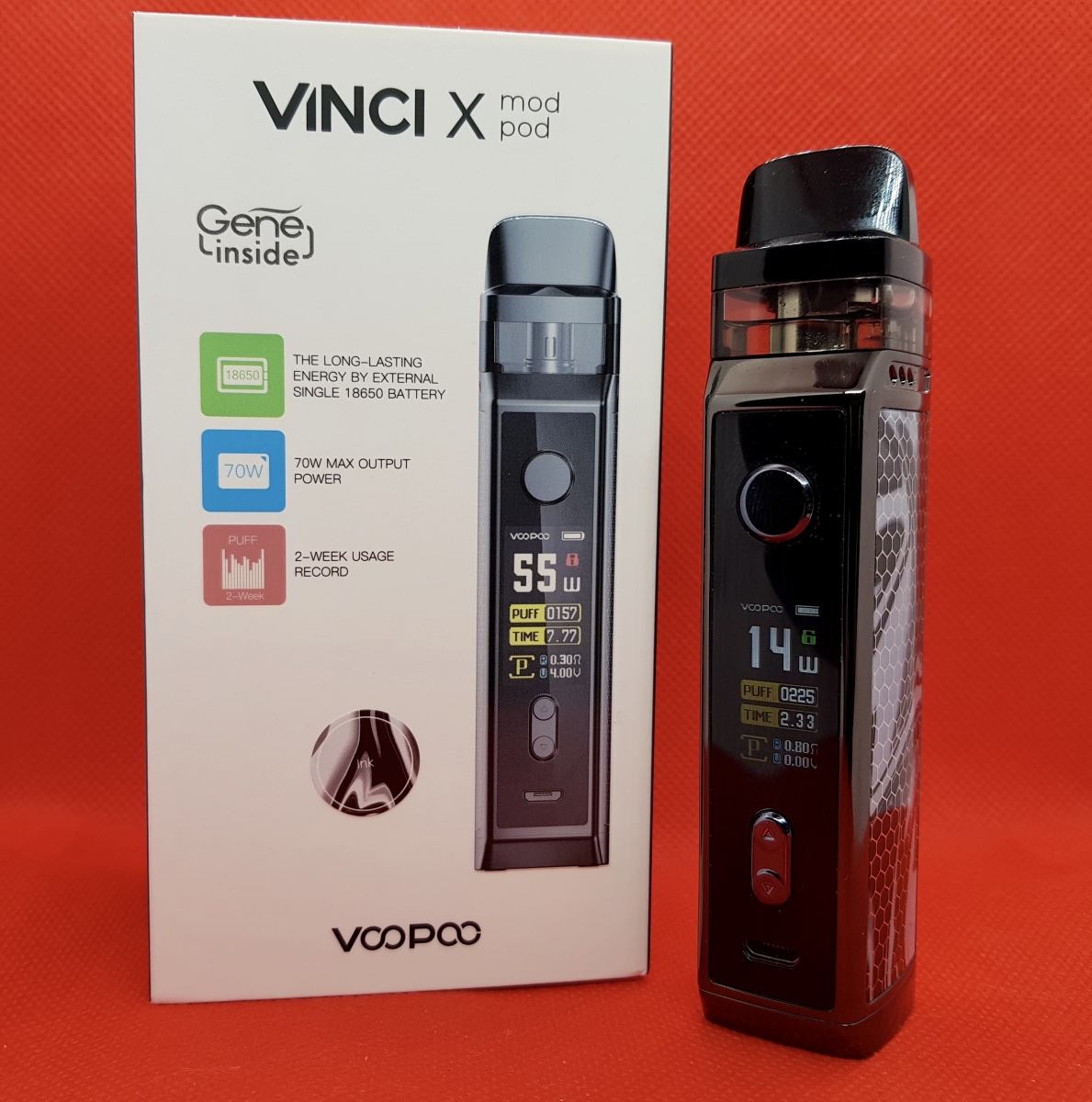 The Vinci X comes in almost identical packaging to the original with the Vinci X mod and pod plus two coils on the top layer, with documentation and a USB cable in a smaller box underneath. 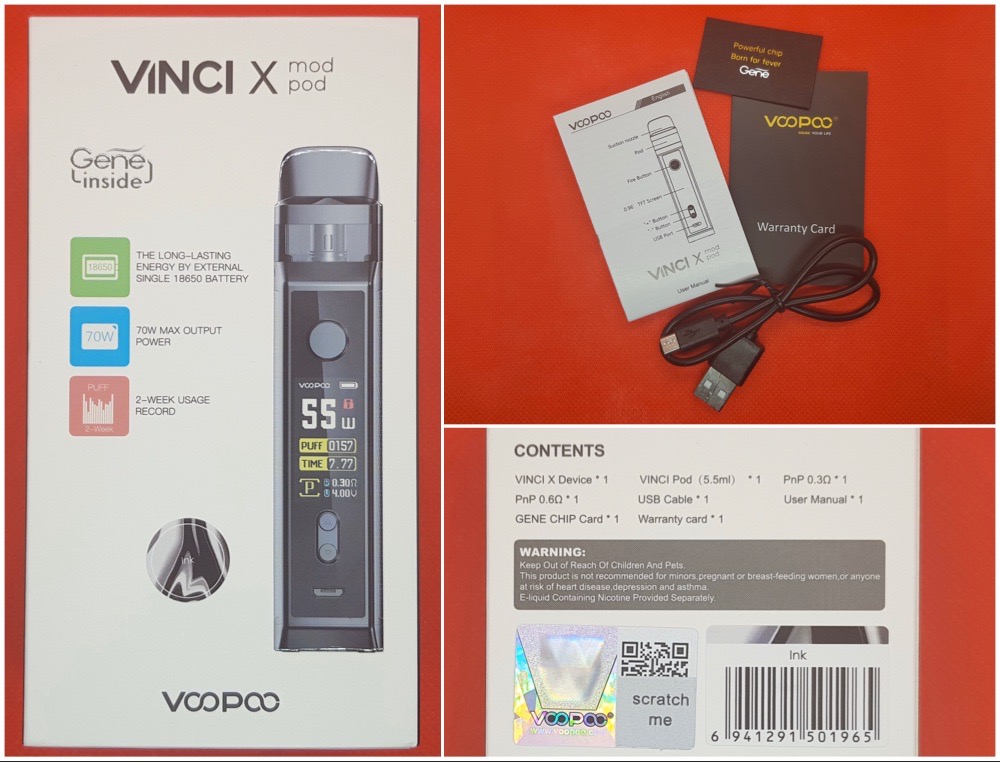 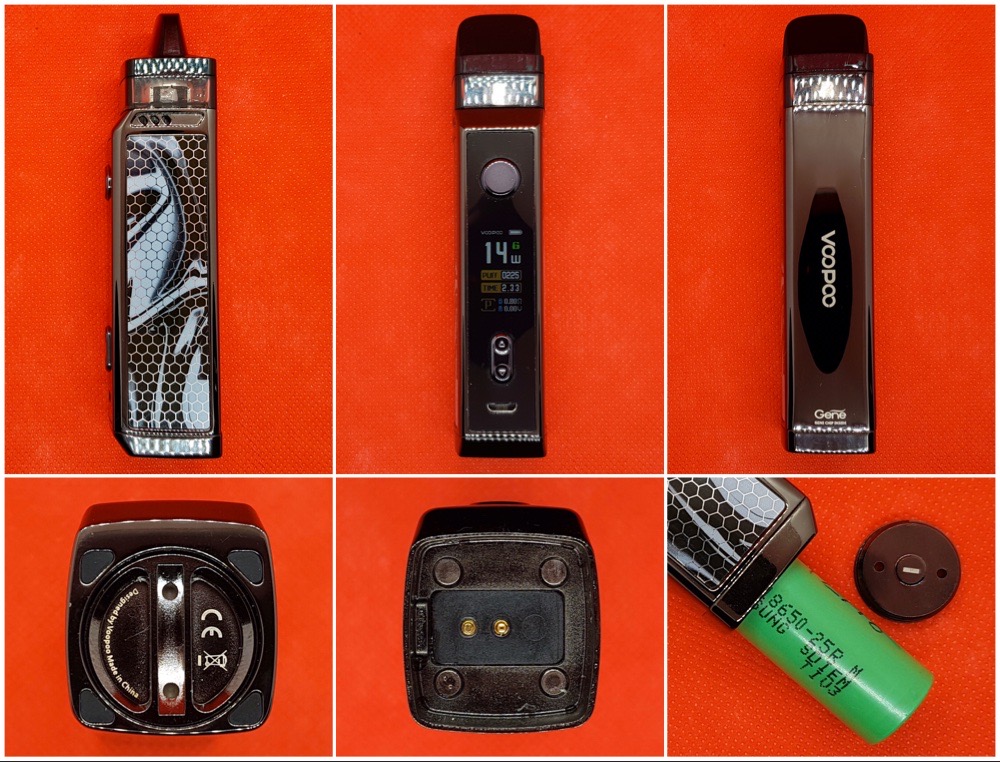 The main draw here over the original Voopoo Vinci is, of course, the use of a single 18650 battery rather than an internal 1500mAh lipo. This does bring advantages in battery life but has obviously increased the overall size and shape of the Vinci X whilst managing to retain much of the original design language.

Overall it’s 13mm taller than the original and only a couple of millimeters wider but has gained a slight bulge on the front which slopes away from the base of the pod towards the control panel area. The USB port has moved away from the underside of the mod to the front and the underside now houses a small threaded battery cap instead. This is clearly marked with a negative symbol in white which makes battery orientation easy.

Aside from the control panel now housing the USB port, the screen and controls are instantly familiar with a bright vibrant screen and easy to access buttons which protrude slightly from the main body. There’s no button rattle this time around either which was caused by the up/down button on the original. The up/down button also has a very positive click in use now where it felt a little spongy before. The fire button feels identical with nice tactile feedback and I found it perfectly positioned for thumb firing as before. Both the gunmetal metal frame and coloured side panels have a very high gloss finish to them again which does unfortunately tend to attract fingerprints, and there’s also a wide choice of colours available as with the first release.

Up top there have been quite a few changes in the recess where the pod is housed. The three beefy contact pins on the original Vinci have been replaced with just two smaller pins. These don’t appear to be as robust as before but still seem up to the task at hand. The draw activation sensor is also absent so if you are a fan of that particular feature then you will miss its inclusion this time around. The pod also feels a little looser, where there was little to no movement before, there’s some definite wiggle if you grab a hold of the pod. It’s still held firmly in place with those four magnets though so I’ve never felt as if I’m about to lose the pod in a coat pocket, and its unique ability to adjust the airflow by rotating the pod 180 degrees it still here and works just as well as before. 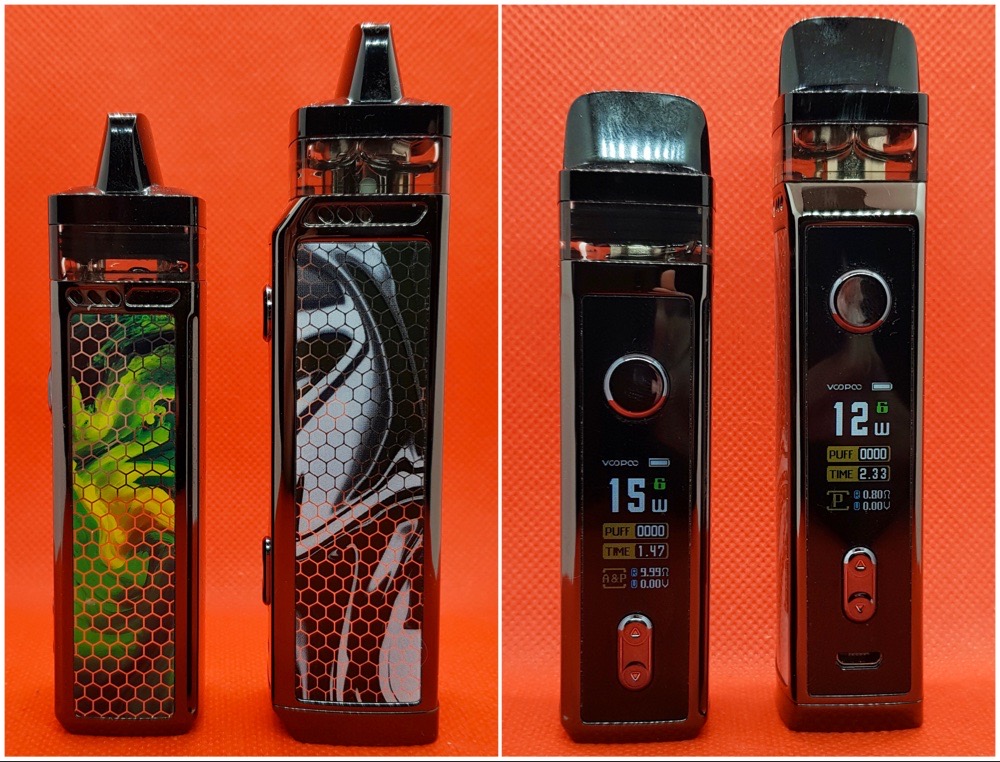 One area that I felt held the Voopoo Vinci back in my last review was the supplied 2ml TPD compliant pod. I felt as if it was holding the coils back because they always seemed a little dry, almost verging on a dry hit at times, and it also made determining how much eliquid remained difficult. The review sample of the Vinci X mercifully came with the international 5.5ml pod and this bore out my thoughts, the coils now always feel saturated with a slight increase in flavour and it’s a breeze to see how much eliquid you have left. If you’ve already bought either version of the Vinci and it came with the TPD compliant pod do yourself a favour and source yourself a non-compliant/international pod, it’s a massive improvement! 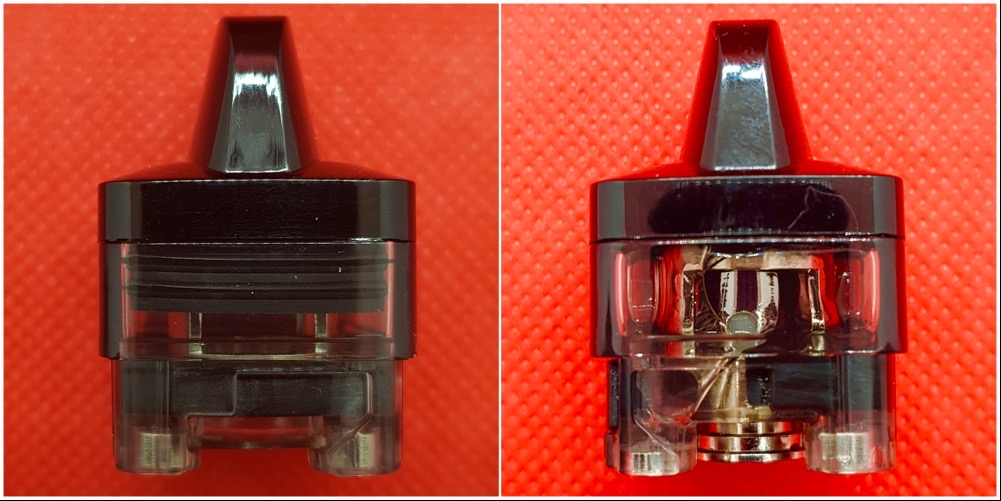 My second bug bear with the Voopoo Vinci was the automatic wattage selection. This is supposed to prevent new users from burning out coils but quickly becomes an annoyance if you prefer to use anything other than the default setting as it constantly reverts back to the recommended wattage at every turn. This is present again with no obvious way to disable it, and it proved to be just as frustrating as before. Given that Voopoo have also recently announced an optional  pnp-rba head for the Vinci line, it will be interesting to see how this behavior manifests itself with that, especially if your build ohms out the same as one of the stock pnp coils.

Charging takes place at 1 amp as before which is more than adequate for an 18650 battery, so if you must charge your battery in the mod it shouldn’t take too long but, as always, the use of an external charger is recommended.

Despite a couple of minor gripes with the annoying automatic wattage selection, again the Voopoo Vinci X has lived up to my expectations. Great build quality, comfortable drip tip and flavourful coils still make it one of the better hybrid pod systems I’ve come across recently. Would I recommend this over the original? Well for me it’s a no brainer thanks to the step up to an 18650 battery, which has paid dividends in terms of battery life whilst still managing to retain a relatively small form factor which is comfortable to use all day, but I’m sure you’ll be happy with either should you decide to purchase one.

Many thanks to Heaven Gifts as always for sending the Voopoo Vinci X mod pod out for review, and as a special bonus don’t forget to use the discount code “Apotv10” at checkout for a generous 10% off your order as well. 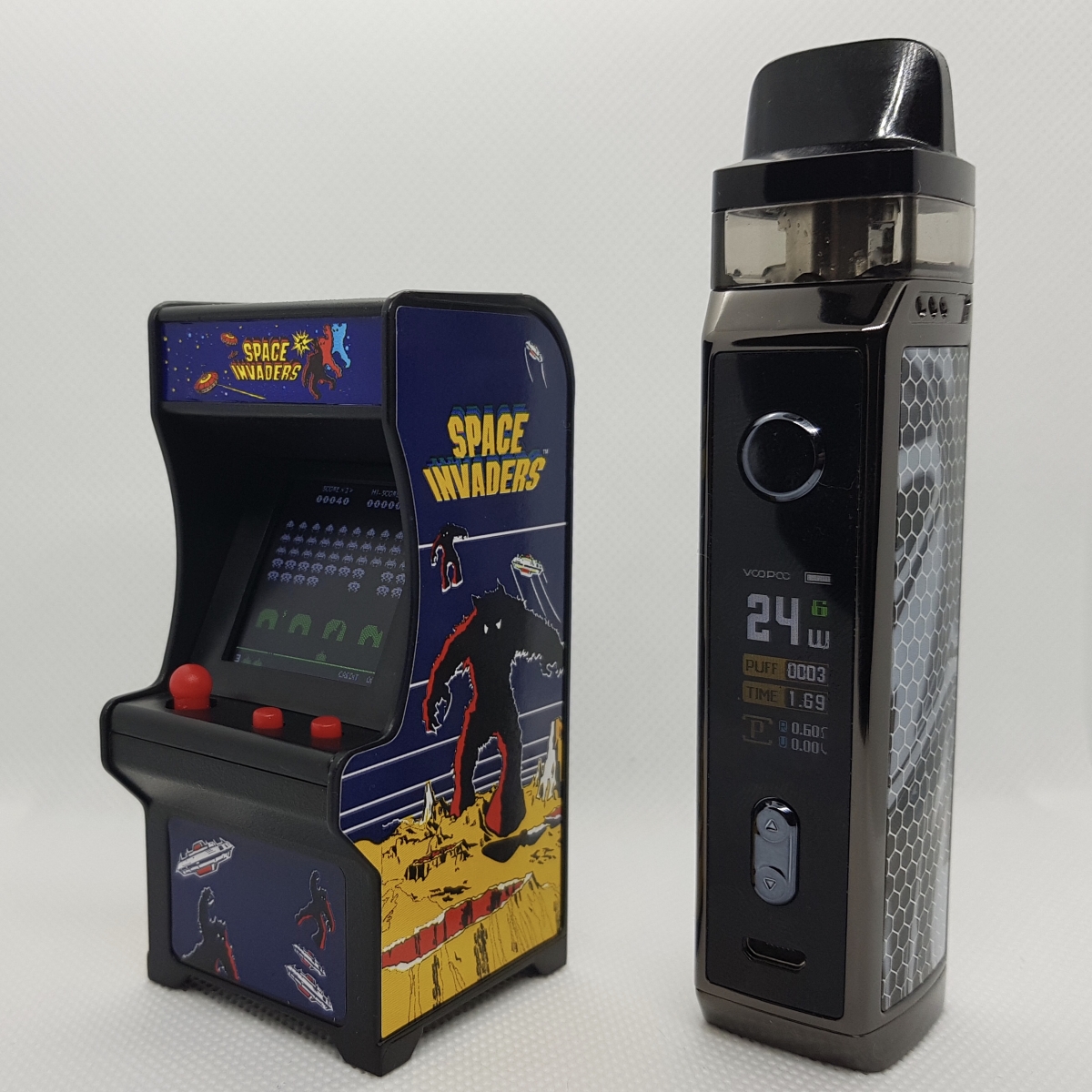