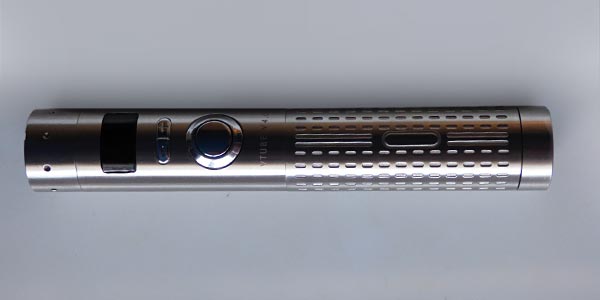 Introducing the VTube V4.0 by Apollo Future Technology Inc. Apollo are very well known in America as one of the main manufacturers and over the last few years their products have become available in the UK.

The VTube V4.0 is a variable wattage device which takes a single 18650 battery. It can handle wattages between 5-50W and the minimum coil resistance it can support is 0.2 Ohm.

Some of you will remember the old Vamo V5 and sheer size of it in 18650 mode, the VTube is very much like that. It is a very big device, 140mm in length and many will probably consider it too big. Nevertheless it is extremely solid in terms of build quality but this also makes it heavy.

I can’t honestly fault the stainless steel construction because it really does make the Vamo V5 seem very poor in comparison. The sheer size admittedly means you do need to get used to it. Personally I think the mod is very nice looking and feels like it is built to last.

The finish is brushed steel so thankfully it is not a fingerprint magnet. The bottom of the device also has grooves in it to help provide a good grip. The balance when you hold it in your hand is quite nice and it does feel comfortable but it does tend to feel a little unwieldy if you put a particularly tall tank on it.

Unlike the Vamo V5 which was often plagued with poor threading on the 510 connector the VTube is far better in comparison and the threading feels very durable. The 510 pin is spring loaded and appears to be gold plated. I found that not every atomizer would sit flush with this device and typically there was about a 2mm gap. The device also features eGo threading so you can also use those atomizers if you wish too.

The VTube is 23mm in diameter so for those of you that are extremely OCD about your atomizers and mods looking perfectly streamlined then this will not be for you.

The buttons are made from plastic unlike the rest of the device. Even so the buttons are rattle free, have a suitable click and are responsive.

The screen display is bright enough and shows you all the typical information: coil resistance, battery life, voltage, wattage and it also includes a puff counter. Due to this being a tube shaped device the display does curve so if you don’t look at it straight on it can appear distorted. The screen itself does have a very smooth finish so it can sometimes make it tricky to read in bright sunlight.

The battery cap has six large venting holes and has the Apollo logo engraved on it. Inserting a battery is without issues and there are two ways you can do it. You can unscrew the battery cap which is a little bit fiddly to screw back on just like like the Vamo. Alternatively you can unscrew the tube just below the main fire button. When you do unscrew it using the simpler latter method if you look inside the upper part of the tube you can see that is sealed with plastic to prevent any juice dripping down from your atomizer into the battery compartment.

The negative battery pin inside the tube is made from solid copper. 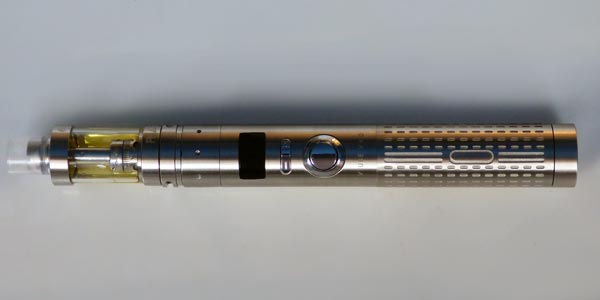 This device is extremely easy to operate which makes it very forgiving for first time users or people who simply don’t enjoy complicated devices and long winded menus.

There is a puff counter on the menu if you should want to keep an eye on how many vapes you’ve had. Interestingly enough it does keep the number of puffs in memory even when you swap out the batteries. If you want to reset the puff counter you need to lock the device then hold the plus and main fire button together until the display shows “system reset.”

Strangely you cannot actually switch the device off and while it is becoming typical these days for devices to be locked and go into standby mode my safety consciousness nature would ideally like it to switch off completely. Of course if you feel the same way you can simply remove the battery so it’s not that big a deal. The screen does feature power saving and will go dark if no buttons are pressed, upon pressing a button it will illuminate again for twenty seconds before once more going dark.

In terms of performance the device is without issues. You can run pretty much anything you like as long as the coil resistance isn’t lower than 0.2 Ohm. It works with Sub-Ohm tanks, RDA’s, RTA’s and gives you up to 50 Watts of power.

I used my Taifun GT-II with this device and being a 23mm tank everything looked nice and streamlined but it did make the device extremely long. My tank was full of Powwow Sauce which is a particular favourite of mine and with a 0.4 Ohm coil it made for a very satisfying vape at 18W.

I also used the Apollo Phazer Sub-Ohm tank with the VTube and due to it being made by the same manufacturer it fitted perfectly flush like you would it expect. However being 22m there was a small lip around it due to the size difference. Despite that I still thought it looked really nice and matched with this mod well. 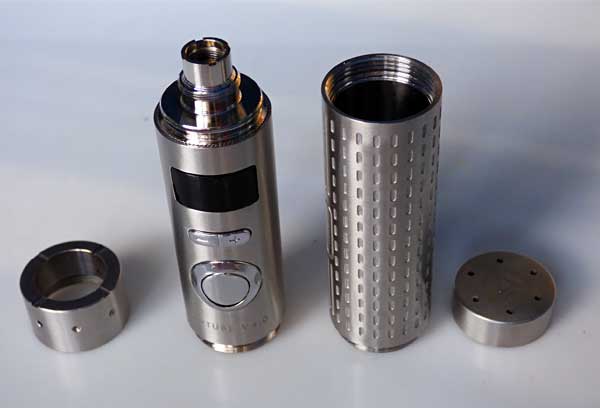 Compared to other mods on the market today the VTube V4.0 has no bloated features and no temperature control which will probably put off some people. However what you have to remember is that some users just want a reliable and straightforward to use device that provides a good amount of power and that is what the VTube offers.

If you enjoy small form factor devices or box mods then this will never appeal to you and it may even remind you of a lightsaber. However for anyone who enjoyed Vamo’s but were irritated by some of their flaky construction then the Vtube V4.0 will likely appeal because it is much better machined and highly durable with far more power available.

Many thanks to Apollo E-Cigs who sent us the VTube V4.0 to review - it is available for purchase here - and POTV readers can get a whopping 20% off all items with the code FUTURE!

For your chance to win the Apollo VTube V4.0 make sure to check out our competition.