A little while ago, Sourcemore sent the rather excellent Brunhilde SBS mod for me to take a look at (Review here). Once I found out Vapefly were releasing a more traditional 21700 kit in the form of the Kriemhild 80W Kit, I was all over it and Sourcemore have been kind enough to send this over for a look as well. 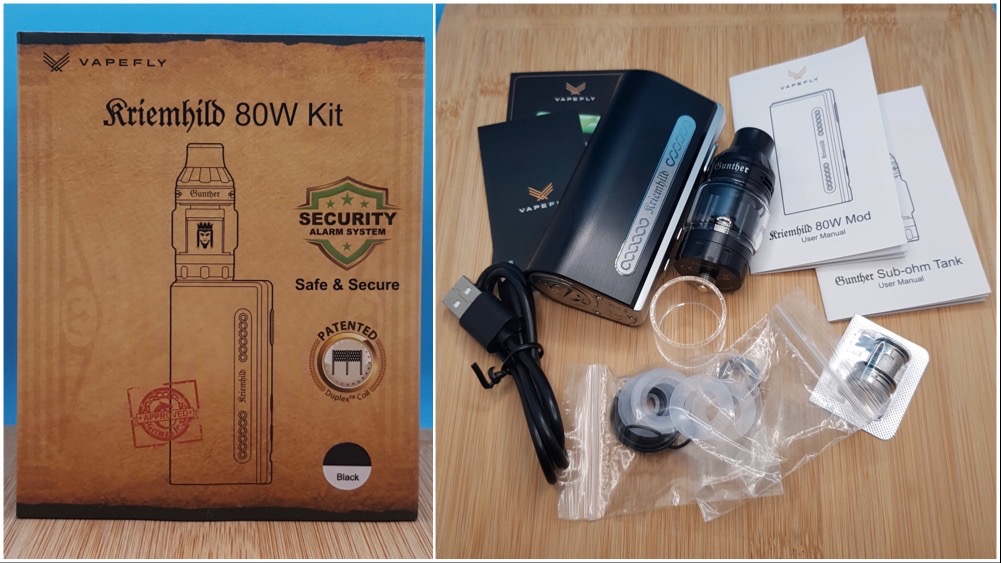 There’s quite a bit included in the full Kriemhild 80W Kit as you also get the Gunther sub ohm tank plus two coils, a bunch of spare O-rings/gaskets, and spare glass for the tank along with a 510 drip tip adapter, a USB-C charge cable, an 18650 battery adapter (hidden in the mod), plus two instruction booklets in multiple languages. The Kriemhild 80W mod and the Gunther sub ohm tank are also both available separately as well.

The Vapefly Kriemhild 80W Kit is available in four colours (black and gold, black, gunmetal, silver), and I was sent the black version for review. They all have a silver front plate apart from the “black and gold” version which substitutes this for a gold finish if you like a bit of bling. 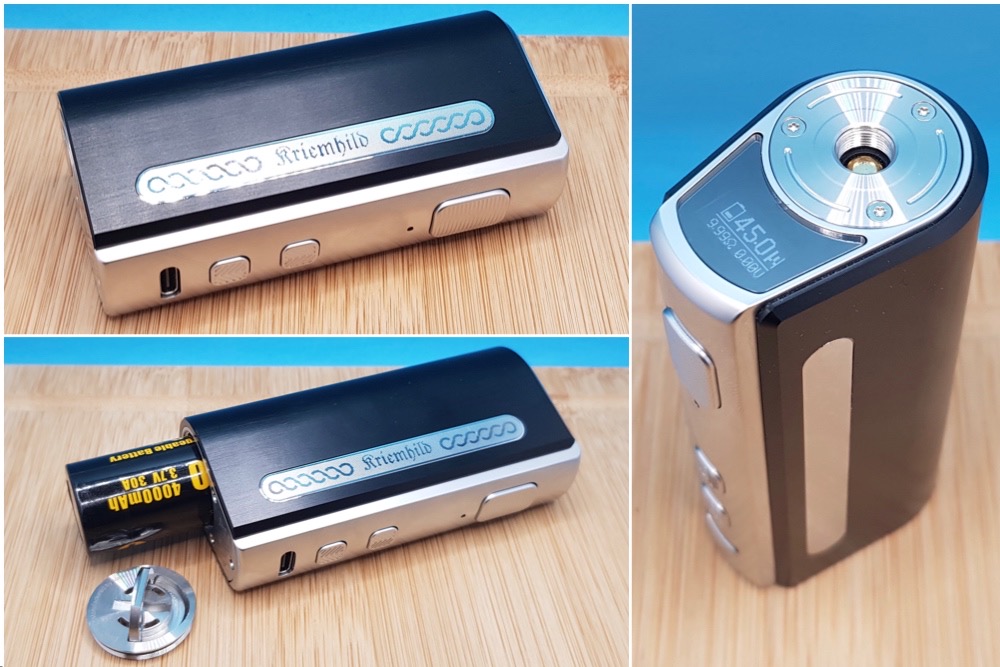 First impressions out of the box are that this is once again quite a weighty beast coming in at 159.5 grams without a battery or atomiser fitted, so I think it’s safe to assume a zinc alloy construction. It’s not offensively heavy though and lends a feeling of robustness that a lighter mod might have lacked.

The front plate is silver with a slightly matte finish and there’s a black accent, which has a lightly brushed effect if you look closely, wrapping around the rest of the tear drop design.The front panel also appears to have a clear coat applied to protect the finish. The branding is rather understated with an inlaid “Kriemhild” logo in silver running down either side of the main body which is a bugger to photograph clearly! Looks wise it’s a bit of a stunner and the slightly elongated teardrop shape means it falls into your hand quite comfortably.

The front panel has the power and up/down buttons along with a USB-C charge port, unfortunately there is a bit of play in the buttons which does lead to a little bit of a rattle, but they do all have a nice positive click to them, and the power button is well placed for both trigger or thumb firing. You may have noticed a small hole just under the power button, well this is for a small buzzer to alert you to several conditions (atomiser short, overheat protection, 10 seconds vape time, battery fully charged) and to be brutally honest, I found this feature to be of limited use almost rendering it pointless. The only time I’ve heard a peep from this is when I was doing the battery charging tests during which it hit a peak charging rate of 1.55 amps. It was nice to hear a beep from across the room once it had finished charging though.

Speaking of the battery, I’m pleased to say this accommodates 21700 batteries which offers a great balance of size and power in these single battery applications, and the Kriemhild 80W mod passed both of my oversized battery tests. This uses a screw-in battery cap which I know some people aren’t keen on, but I’ve gotten quite used to this as it seems to be more and more common these days. There aren’t any polarity markings on the battery cap itself, although I was pleased to see a decent amount of battery venting in the design, luckily the bottom of the battery tube is very clearly marked with a big red plus sign so this left me in no doubt about the correct way to insert batteries.

The screen has been moved up to the top of the mod alongside the 510 plate which is something I haven’t seen in quite a while, and even though it’s pretty small, it is bright and the relevant information is very clearly laid out. You’ll be happy to learn that the screen can be put in stealth mode by pressing power and down if you don’t want this flashing in your face every time you vape.

Whilst the Kriemhild 80W mod is 30mm wide, the 510 platform itself is 25.7mm across as this has a beveled edge running around the top edge. This means that this works best with 25mm atomizers. You could push this out to 26mm, but anything larger is definitely going to overhang or start to cover the screen.

The performance from the board had been great with consistent snappy responses. I was a little perplexed by the 80 watt upper limit and lack of modes though. You only have wattage and bypass modes available, and I’m sure there will be some old school vapers out there that will be disappointed by the lack of a voltage mode, particularly as this was present on the Brunhilde SBS mod. The 80 watt limit I can understand as even with a 21700 battery, your battery life is going to be terrible above this point anyway! 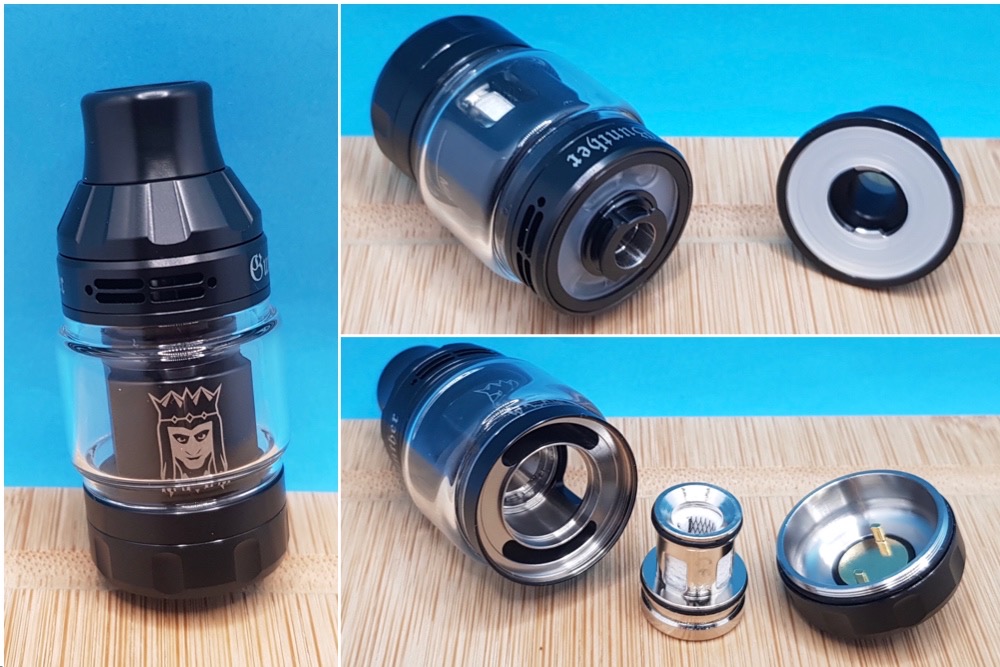 In the full kit you also get the Gunther sub ohm tank along with two coils. This is quite tall at 58.3mm including the supplied drip tip, and uses a top airflow system which then redirects the airflow down the sides of the chamber and back up through the base of the press fit coils.

The preinstalled bubble glass has a 5ml capacity, and there is a 2ml straight glass in the box as well. You’re going to want to use the bubble glass though as this can be quite a thirsty beast as with most modern mesh coil designs. Filling is easy once you get the top cap off, whilst this is a nice quarter turn bayonet system, the sloped top cap makes it difficult to get a grip and this has left me a bit frustrated on several occasions.

This is the first time I’ve used the Vapefly FreeCore coils and I was happy to see that they were both clearly marked and use Kanthal (yay, a sub ohm coil I can actually use!!). 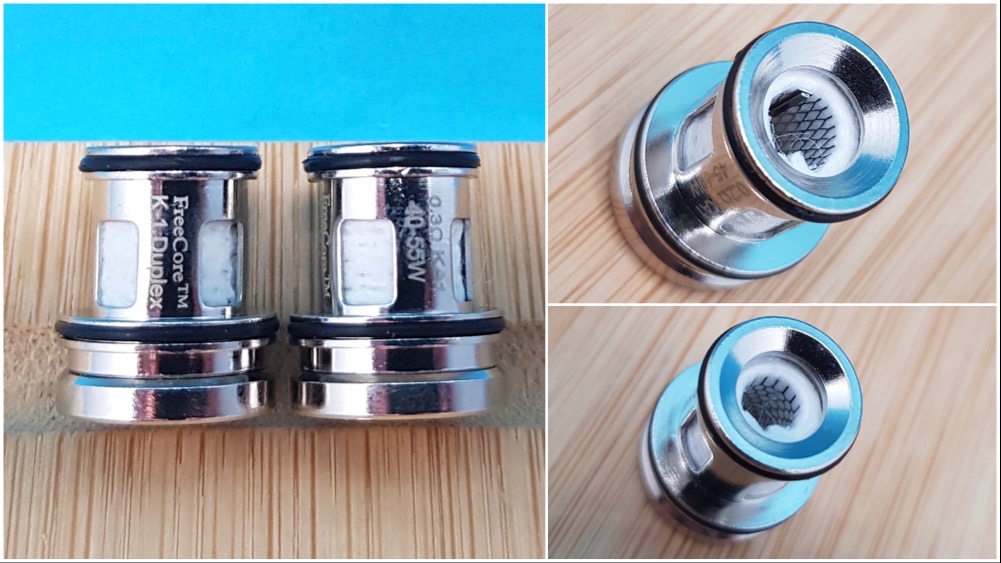 The flavour from the coils is outstanding. I was particularly impressed with the 0.2ohm “Duplex” coil which effectively gives you two heating areas by the use of three legs rather than two (one positive, two negative?). The coil life seems to be pretty decent as well, but it might be worth looking into the optional RMC rebuildable mesh coil if you want to save a few pennies.

One weird issue I did find with the Gunther tank is that with the airflow exactly half open, it develops a rather distinct whistle. Move it about a millimeter either side of this, and it goes away. The simple answer here in my case was to have it open just a hair past the halfway mark, and this provided me with my perfect amount of restriction.

Another stunner from Vapefly, much like the Brunhilde SBS mod before it. I’m sure the Kriemhild 80W mod is going to become a firm favourite of mine. I was equally impressed by the included Gunther sub ohm tank and the FreeCore coils as I generally find pack in tanks of this nature to be little more than bin fodder once I’ve gone through the included coils. I think I might be tempted to give the optional RMC rebuildable mesh coil system a try first on this occasion though. 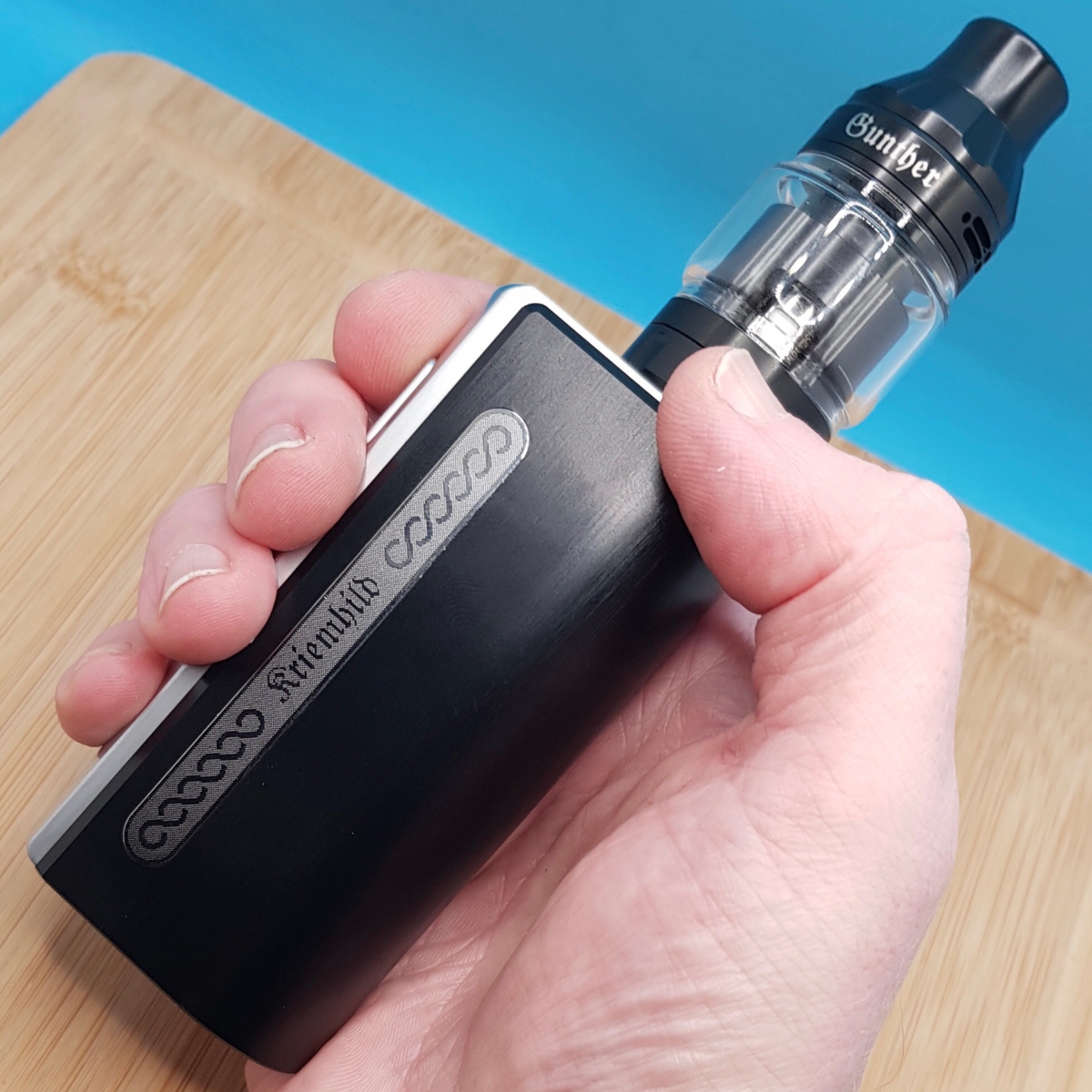