After my recent foray into the world of side by side (SBS) mods, I spotted another interesting piece of kit from Steam Crave with their Hadron Lite, another 21700 SBS mod, and our friends at Sourcemore have been kind enough to send one over for review.

The Hadron Lite is available on its own or as part of a Combo Kit with the rather good Aromamizer Supreme V3 rdta included, but as I already have the Supreme V3 to hand I asked Sourcemore to send just the mod by itself. This is currently only available in black or gunmetal with stainless steel accents, and I was sent the black version to test. 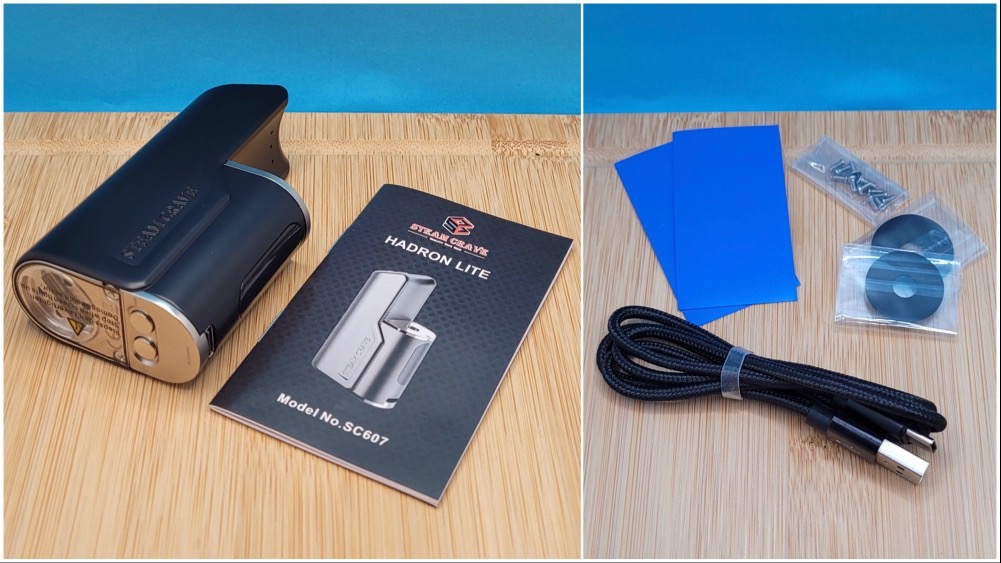 Besides the Hadron Lite and a fairly comprehensive instruction booklet, you do get a couple of extras thrown in the box as well. These include a bag of spare screws which is something I don’t recall seeing before, a rather nice braided USB-C cable, two atty gaskets, and two battery wraps, plus the obligatory 18650 battery adapter hidden in the battery compartment.

The included atty gaskets are two sizes, one for 25mm atomisers and the other for 22mm ones. I almost always use atty gaskets anyway to prevent scratches to the top of my mods so these are always a welcome addition. The battery wraps are supposed to be for your 21700 batteries but I think something went wrong in the QC department, these are far too short and I think you’d actually be hard pushed to even manage to rewrap an 18650 with them! 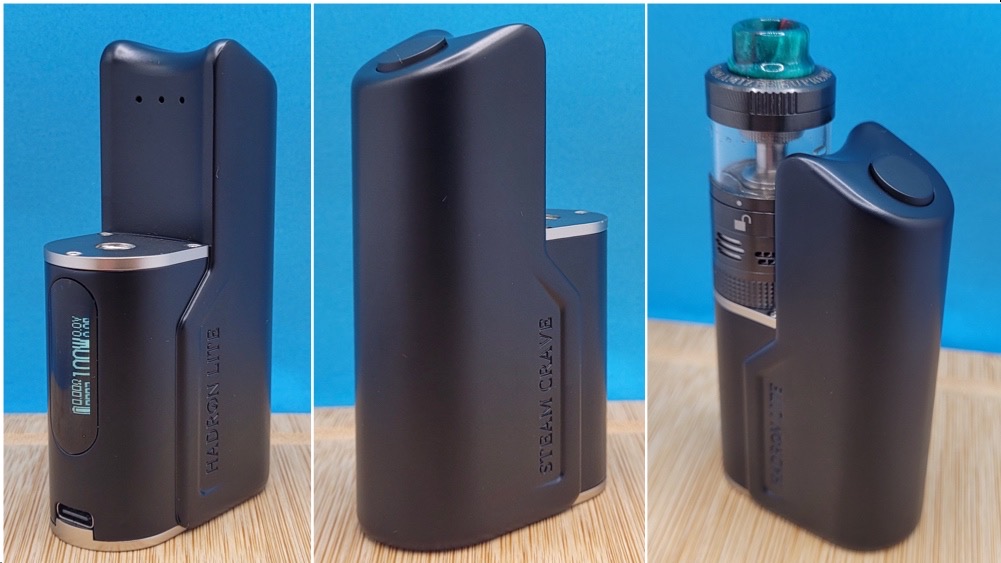 I was initially drawn to the Hadron Lite because of its bold yet minimalistic design and some of the photos I’d seen online made it appear as though the step running down the sides from the back of the mod were a separate piece, so I was a little surprised to find that the main chassis is in fact a single casting, this doesn’t detract from the design though and at least I won’t have to worry about dirt and grime getting lodged in there. Branding is also kept to a minimum with simple embossed “steam crave” and “hadron lite” logos running down either side, and it’s all tastefully finished with stainless steel on the bottom panel and 510 plate. 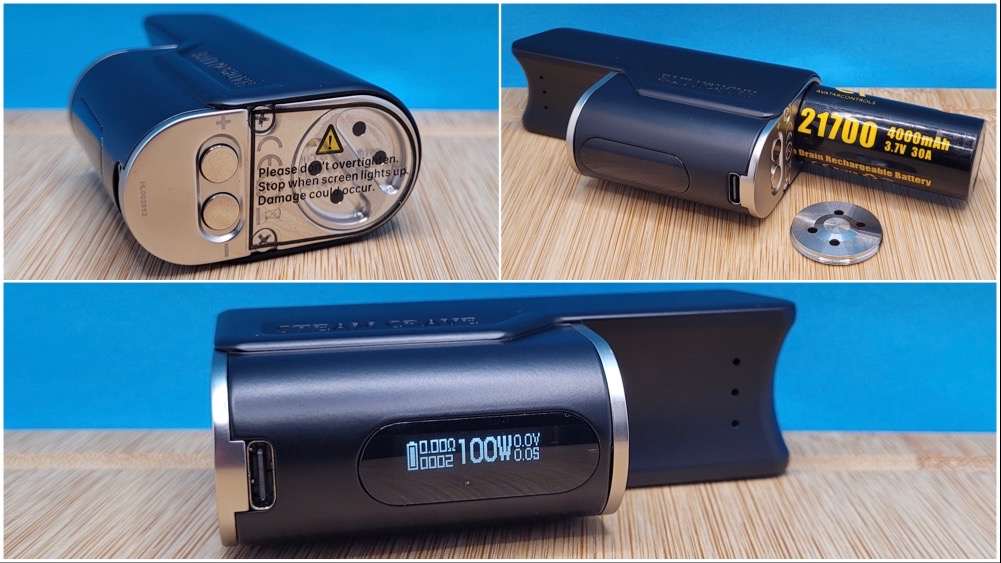 When you first take the Hadron Lite out of the box, you’ll find a sticker covering the battery cap advising you to not over tighten it when installing a battery, Steam Crave advises that you in fact stop as soon as the screen on the front lights up to prevent any potential damage and I suspect that this is because there is no spring in the positive contact at the top of the battery tube which lies immediately under the fire button. In my case, this meant that the battery cap sat slightly proud of the base and I did seem to get quite a lot of heat transfer when doing this, an extra eighth of a turn solved both of these issues and I’ve not had any ill effects from doing so. There’s plenty of venting built in here as well with holes on both the battery cap and towards the top of the tube where they will be hidden from view by your atomiser.

You’ll also find the up and down buttons on the base which is something I’m used to seeing but you’ll want to lock these by using the “fire + down” combo as I tend to find myself adjusting the wattage with my pinkie finger otherwise! The screen is fairly basic but it’s got all the information clearly laid out, and it’s bright enough to use outside. It does lack a stealth mode though which is a tiny bit disappointing.

The Hadron Lite only passed one of my two oversized battery tests, the “too tall” one. Unfortunately it failed the “too fat” test so you might want to bear this in mind if you use thick or double battery wraps. On the plus side, it worked well with a 20700 battery as well with zero battery rattle.

There is on board charging via the USB-C port on the front should you find yourself away from a dedicated charger, and in my tests this hit a peak charge rate of 1.7 amps. As usual, I’d advise reserving this for occasional use when you're out and about rather than relying on this as your primary means of charging. 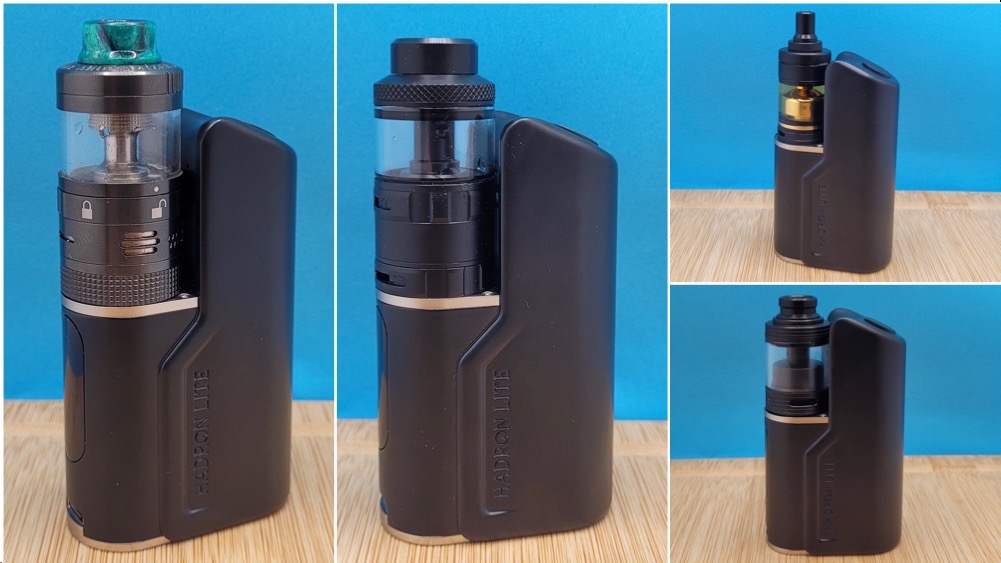 The fire button is on the top above the battery tube and is sloped down towards the back of the mod. This position means that it’s perfectly placed for thumb firing, but this combined with a fairly large drop of 35.5mm to the 510 plate means that the Hadron Lite actually favours fairly tall tanks. The Aromamizer Supreme V3 at 54mm (including the drip tip) is a perfect match here as it means that you have enough room for your thumb, with anything much shorter than this it can start to get a bit awkward to use. The spring loaded 510 plate can accommodate anything up to 25mm with the obvious caveat that you can’t have anything bulging out of the sides like a bubble tank.

The Hadron Lite uses a proprietary board unlike the rest of the Hadron range which favour DNA boards. This has wattage, voltage, TC, and bypass modes so should have you covered for all eventualities. Voltage users in particular will be pleased to learn this goes up to 8 volts in 0.1 volt increments, this is limited to 5 volts below 0.25ohms and although the Hadron Lite allowed me to select 8 volts with a 0.22ohm coil, the live wattage readout combined with an ohms law calculator seemed to confirm that this is the case. I haven’t tested the TC mode due to my nickel sensitivity but performance in wattage mode has been solid.

A great side by side option from Steam Crave particularly if you like taller tanks and need the extra battery life afforded by a 21700 battery. Support for 25mm atomizers is also a big plus as this isn’t something we often see in the SBS market. Whilst some may be disappointed that this doesn’t sport a DNA board like the rest of the Hadron range, I’d remind them that the design of the Hadron Lite would most likely require the aging DNA60 board, and the proprietary chip in play here seems to be a solid performer.

Many thanks to Sourcemore for sending the Steam Crave Hadron Lite over for review. As always they’ve even given me a discount code for you to use: 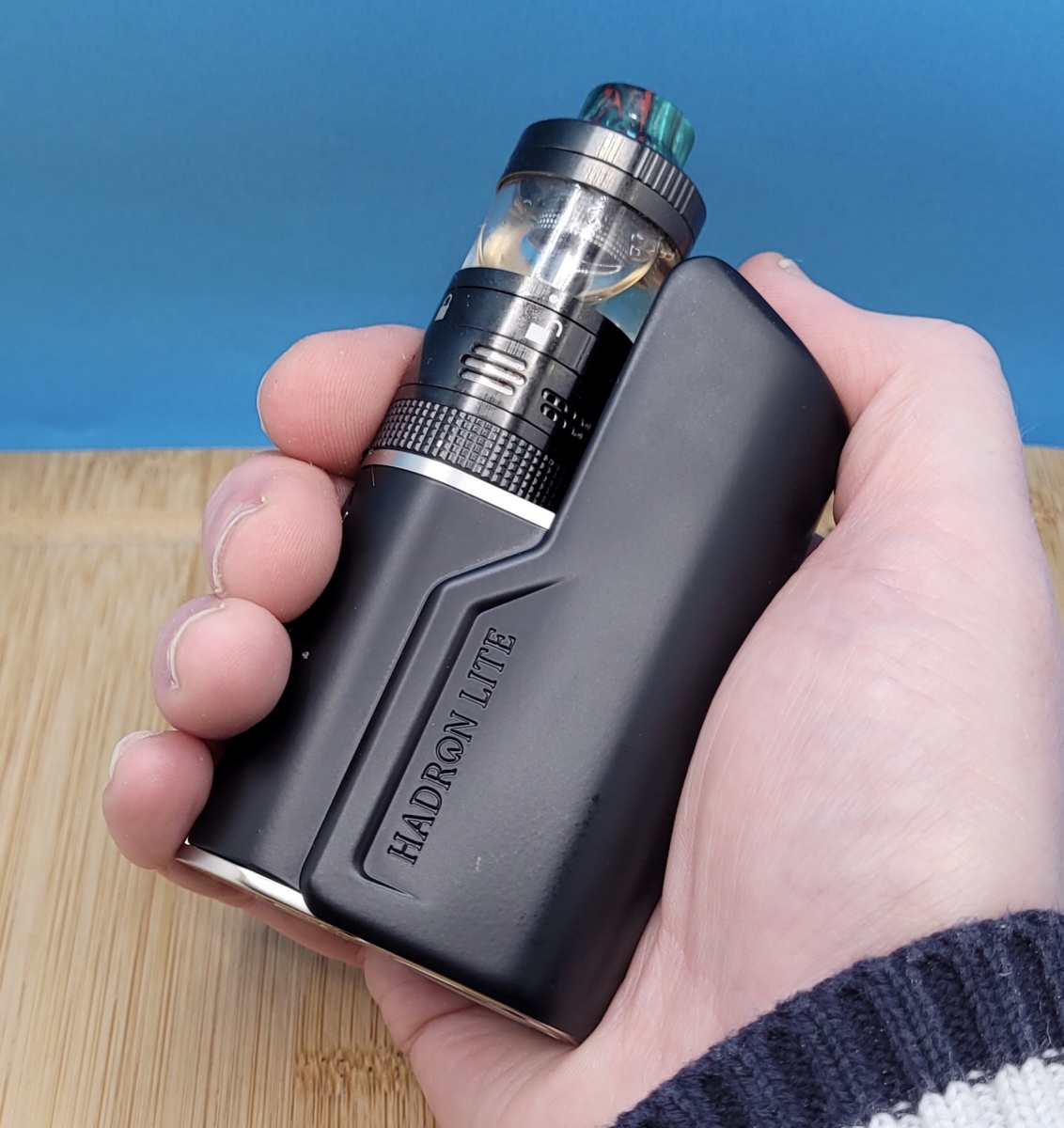