The Smok SCAR-MINI kit is hot on the heels of its big bro, the Smok Scar, with its matching, ruggedly stylish appearance. Using a single 18650 battery, the SCAR-MINI can output up to 80W of power, and comes equipped with usb-C charging for fast, reliable recharges. The minimal 0.69inch OLED screen displays key vape information at a glance, while the water, dust and shock resistant body makes the SCAR-MINI ideal for the great outdoors or demanding work environments.

The SCAR-MINI comes equipped with the TFV9 Mini 22mm tank, which has a redesigned airflow system compared with the original TFV9. A fully adjustable airflow and swivel top refill mechanism make adjusting and refilling quick and easy, even whilst on the go. The V9 meshed coil features a larger surface area with a 0.15Ohm mesh coil inside.

Pleasingly, the main feature of the Scar mini is clearly displayed on the box and that’s the IP67 waterproofing. The box is a typical Smok high quality two piece black box and an outer sleeve, Mr Postman can kick this around all day and it should still arrive in one piece. 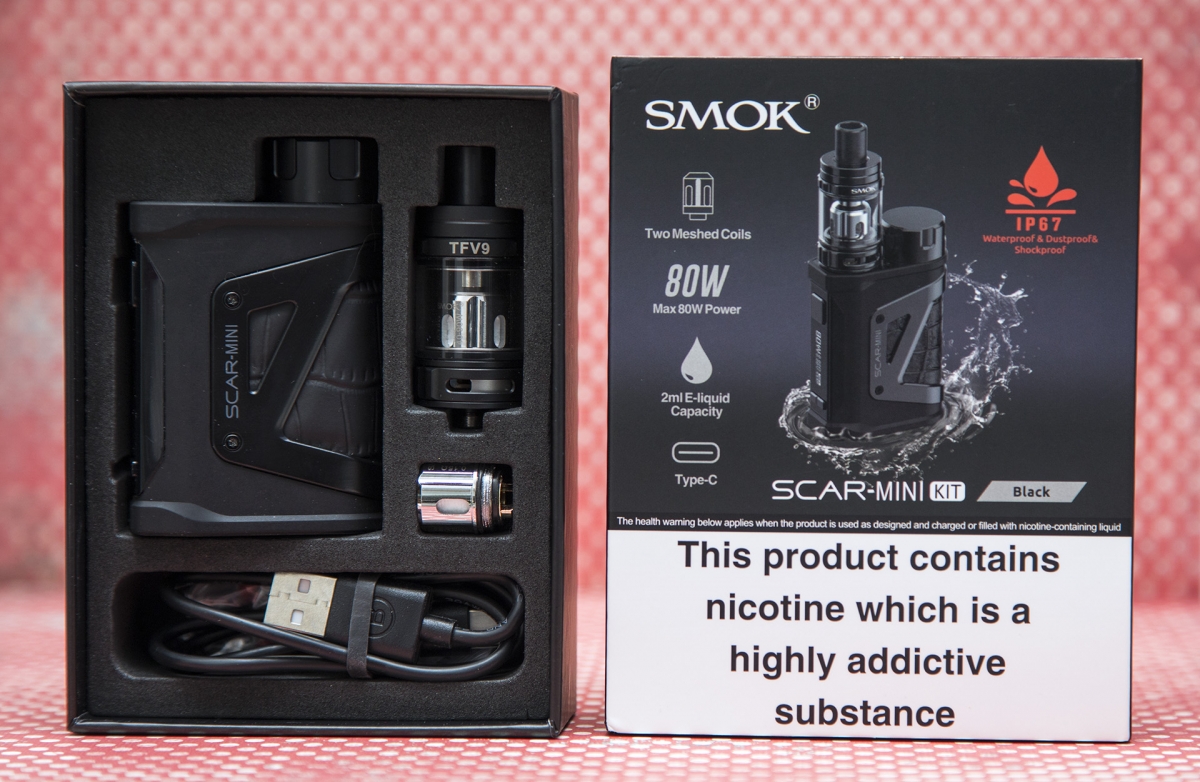 Included in the box

It still annoys me how the TPD edition doesn’t include a spare glass section. It’s bad enough we suffer 2ml capacity, but Smok are taking the mick by omitting a spare glass, either that or they just assume you’re going to buy a bubble glass and lob the 2ml away?

Strangely, Smok include two of the same 0.15Ω coil which is an odd choice for a single 18650 battery mod as the mid-range of this coil is around 65-70 watts, I would have thought a 0.3Ω coil would have been a smarter option, time will tell if I scoff my words…. 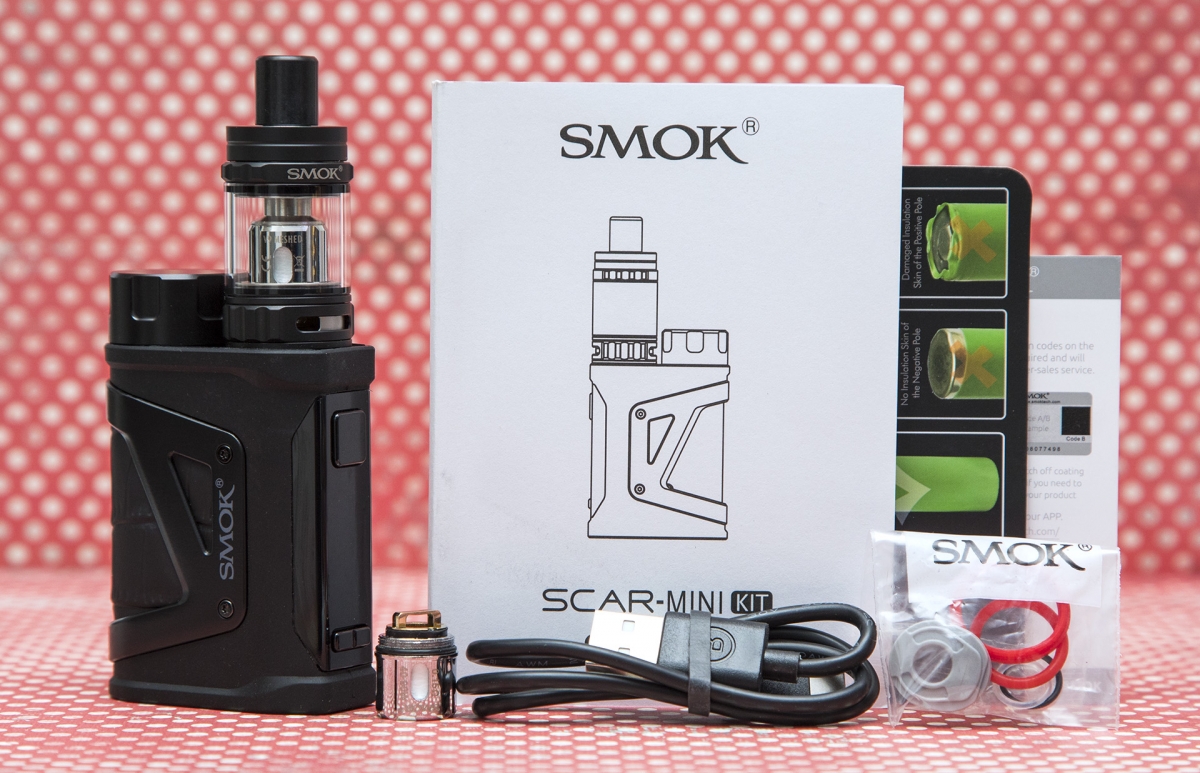 As you can see, I chose the black version and my initial thoughts were ‘very Darth Vader’ with its quilted style, black, squishy material wrap. I really like the whole black vibe it had going on. Upon picking the mod up for the first time, it feels really nice, lightweight and compact, which feels very comfortable in the hand. 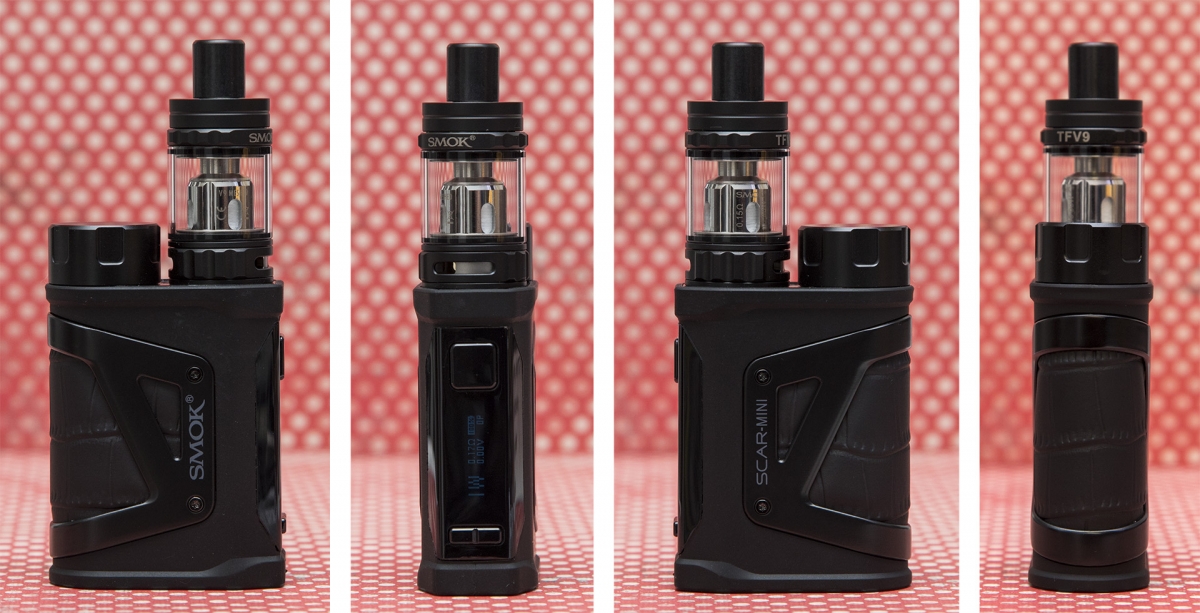 It’s obvious by the feel of this kit that it has been designed to take a bit of hammer with its IP67 waterproofing and rubberised coating with a metal ‘Aegis’ frame, so it should survive a drop or a quick soaking, though the TFV9 tank has had no waterproofing and looks pretty basic. 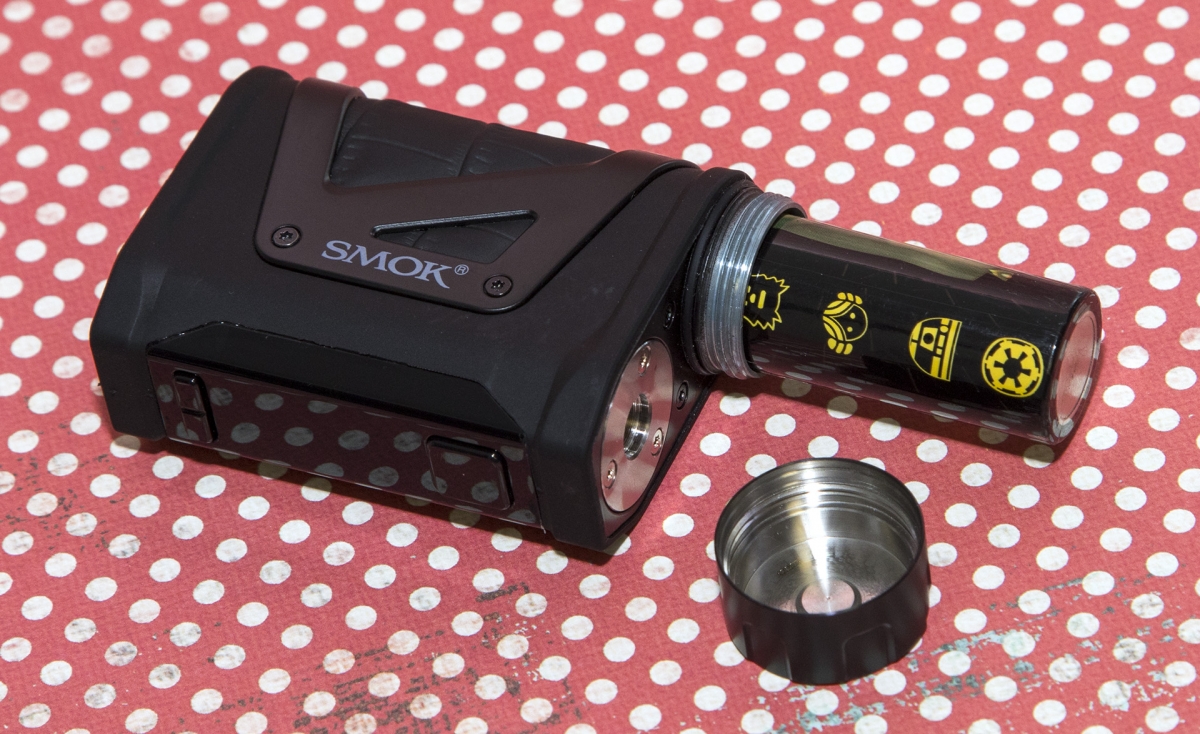 Fitting the battery is achieved by unscrewing the rather large top cap. At first I wasn’t too keen on it, but on closer inspection you appreciated how short they managed to make the mod and a few extra mm on the top cap is a wise choice and looks fine once the tank is fitted. The cap is nice and grippy which makes unscrewing pretty easy, the thread felt a little raspy but I applied a smidge of e-liquid on the thread and it felt fine after that. There is a rubber seal at the base which makes the battery compartment waterproof. 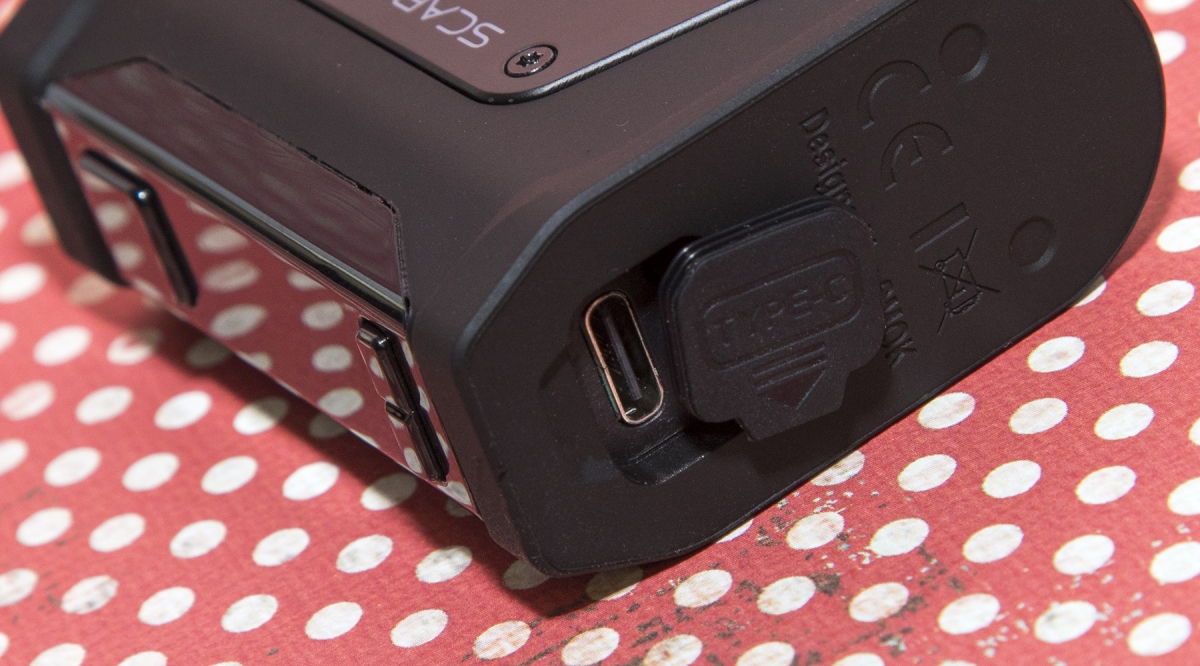 The usb-C port is at the base and has a rubber seal protecting it which provides additional waterproofing. Overall I was pretty impressed with the construction of the mod, and the rubberised coating and padded wrap made it feel nice and grippy.

Before I get into the tank, when will Smok STOP confusing us consumers with the whole TF4-8-9-12-16-Lite-King-Baby-Prince-Beast thing? I’m totally lost with it all.

The 22mm tank is very old-school in its construction and pretty bland looking. The cheap drip tip was especially disappointing, but to be fair it does keep the whole black theme going. The top and bottom notching matched the look of the battery cap nicely, but it was the airflow that caught my attention the most, there’s a divider in the centre of each slot that gives you two styles of airflow adjustment. At first I doubted it would make much difference, but it turned out I really liked this feature.

The 0.15Ω coils rated at 40-90 watts (pretty broad range!) were quite small though well-constructed, with nice large wicking ports and a single bore mesh inside. No plug-n-play as they require screwing into the base, I don’t mind screw in coils but it feels a bit 2018, as does the whole tank. 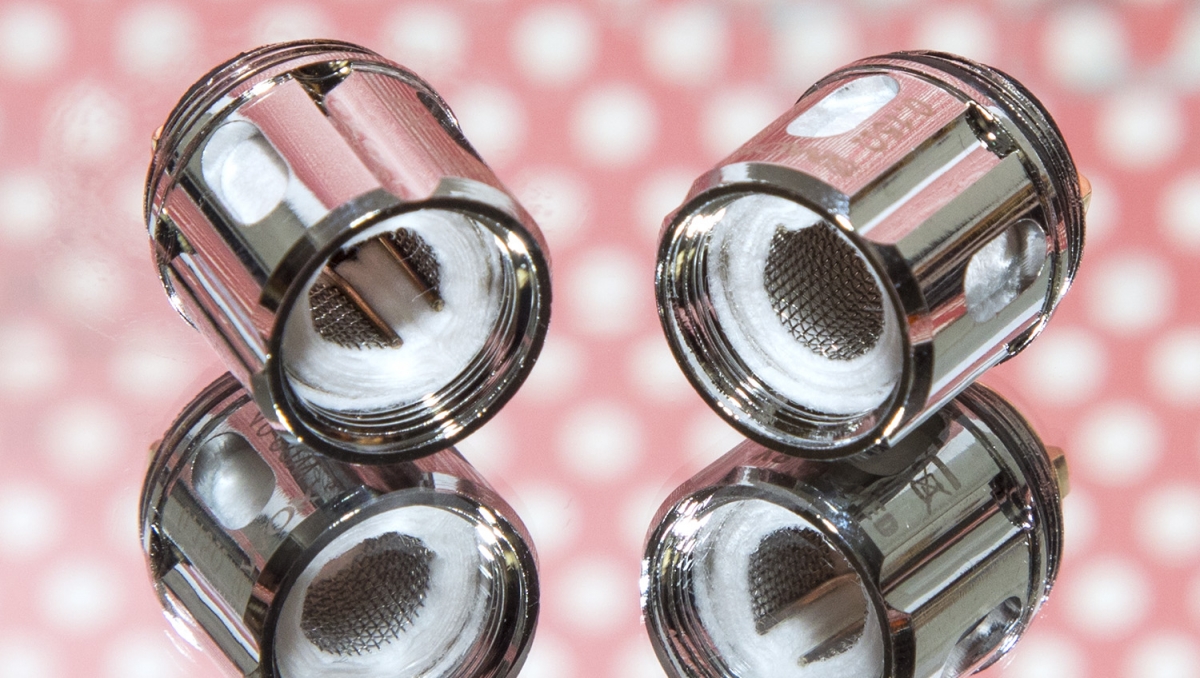 Generally the tank left me feeling very underwhelmed, I can only hope the coils performance makes up for it, considering the Baby V2 is one of my all-time favourite stock mesh tanks, I was sceptical.

There isn’t one.
The End

Already underwhelmed with the tank, I was pretty stunned to find how basic the chipset was. You can turn it on/off, lock the buttons, reset the puff counter, and adjust the wattage. That’s your lot!

This can either be a good or bad thing, depending on your tastes. Obviously it’s very beginner friendly with nothing to confuse, and to be fair the less power hungry the chipset, the longer the battery should last. Perhaps this was Smok’s thinking?

The manual is a joke, one page on operating and then four pages on how to change the coil and fill the tank! Really? I’m guessing the manual writing department felt guilty and expanded out of pity.

One final whinge before I crack on and vape on the bugger…….

The screen is tiny which doesn’t really matter since there’s no options to change, it is pretty dim and forget trying to see it outdoors unless you live in Scotland (always pissing down and cloudy).

As you can probably tell by now, I was starting to feel pretty negative about the Scar Mini kit. Could the actual vape experience turn it around?

It did indeed! Well not quite at first, I smacked the wattage at the middle range of 65 watts and airflow fully open, then took a few toots, not too shabby but tweaking the wattage and closing the airflow off to the half open setting, this tank really came alive. In fact the last time I experienced a wow factor from a Smok coil was the Baby V2 mesh coil which was well over a year ago. I have tried the TFV16 which was okay but nothing special, I wasn’t 100% if I wasn’t over compensating so I went off to do a comparison with the Baby V2, and to my surprise I actually preferred the smaller V9 coil.

I think it’s a combination of everything being reduced, the coil size, the airflow, and drip tip all seemed to deliver a more intense vape which brought the flavour out even more. Vapour production was pretty large as you would expect from Smok, personally I’m not fussed by how big my vapour trail is, flavour is king for me and this tank and coil delivered!

All of my bitching and moaning soon faded into the distance, I was really enjoying this kit. It felt great in the hand and the flavour carried on impressing me for days. I also found it a perfect pocket kit and it wasn’t much larger than some of my MTL setups.

Battery life wasn’t as bad as I had feared at this wattage and lasted me around 5-6 hours which isn’t too shabby, and I didn’t notice any power drop off until it was under 30%. Refilling the poxy 2ml tank was my only irritation as I’m not a fan of this child locking top cap design (pull up and twist), though I doubt I would upgrade to a bubble glass as I feel it would ruin the look of this kit. 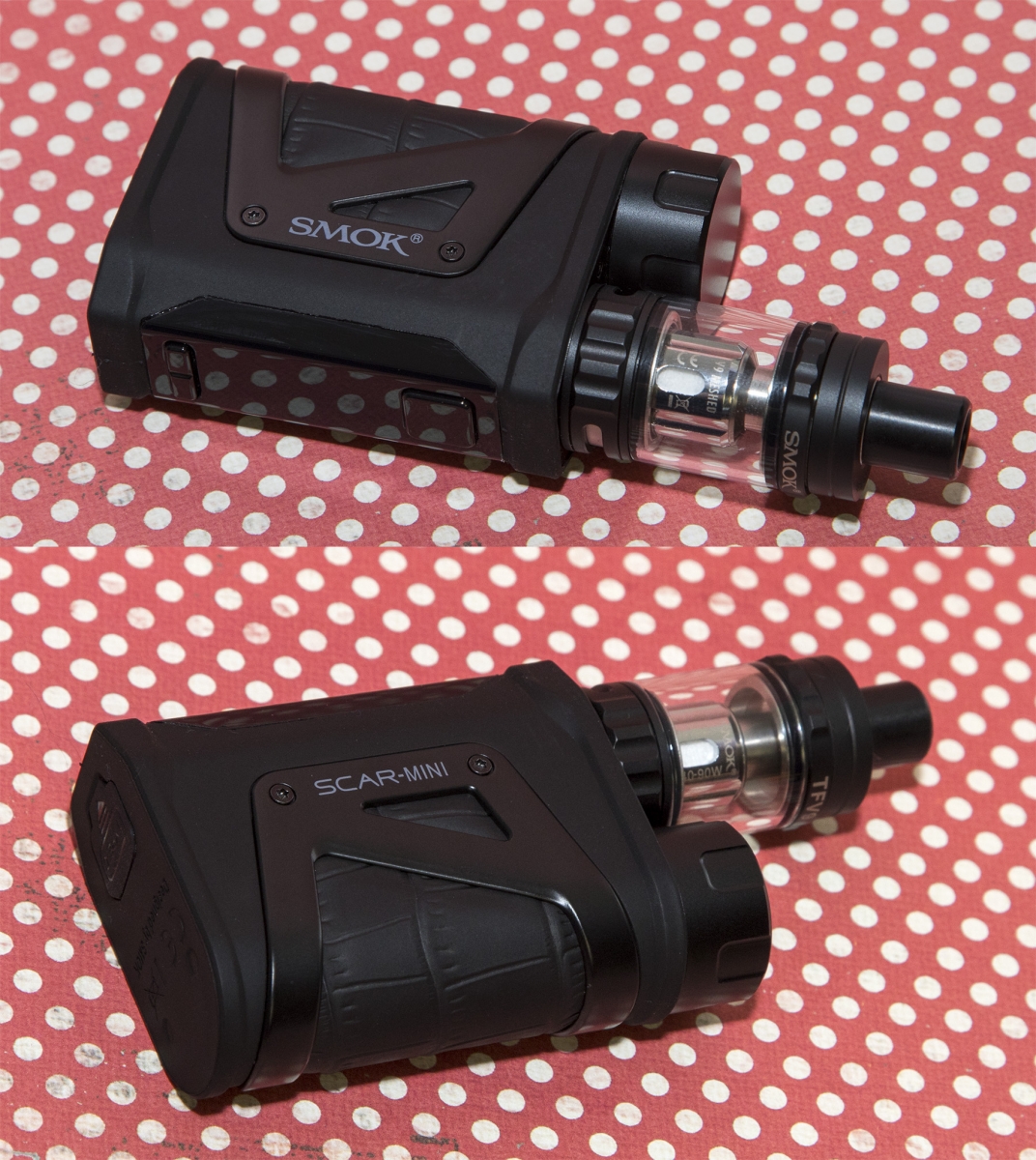 The Smok Scar Mini and TFV9 Tank kit is very basic and there isn’t a single feature that stands out, BUT this little bugger surprised me, mainly down to the tank and coils performance and intense vape it produces. The basic wattage only mod simply didn’t matter, it did all that I needed and produced power to the coil and felt great in the hand.

It’s a far cry from Smok’s usual loud/shouty offerings and is by far the most subtle Smok kit I’ve ever owned. The lack of functionality simply isn’t an issue for this kit as long as you intend to use the TFV9 tank. RTA users might find it too limited, it works fine for my MTL 22mm tanks but I will stick with the included tank as this partnership works a charm for DL vaping.

Hand on heart, I had already prejudged this kit and I was all ready to slag it off for a high wattage coil (best at 70 watts) in a single 18650 mod kit, but it just works and Smok have nailed the vape for the included coils. I very much doubt a higher ohms coil would deliver the intense flavour that I get from this setup.

Despite my early impressions, the Scar Mini is a very capable kit and, more importantly, it delivers a superb vape. My main gripe would be that the TFV9 could have perhaps offered a higher Ohm coil option to conserve battery life (maybe a 0.3Ω). Being so basic didn’t matter in the end, as soon as I had a battery in it, fuelled it up, and set my wattage, then I was as happy as Larry. 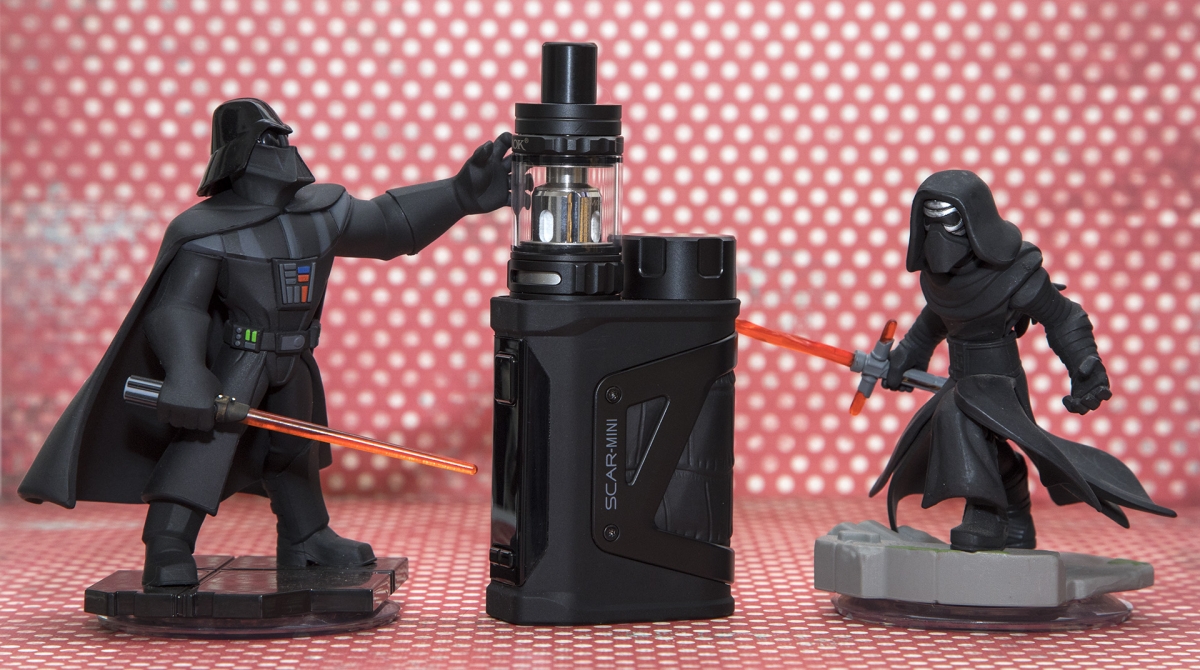