Now and then something rather special comes along. Though the Kizoku Techmod isn’t all that new, it is something that has caught my eye for a while now, so when Health Cabin invited me to review it, I jumped at the chance. They were very confident about this kit, and spoiler alert: they had every right to be. From the moment I first held this device, I knew I was in for a treat. Read on to find out why I love this kit so much. 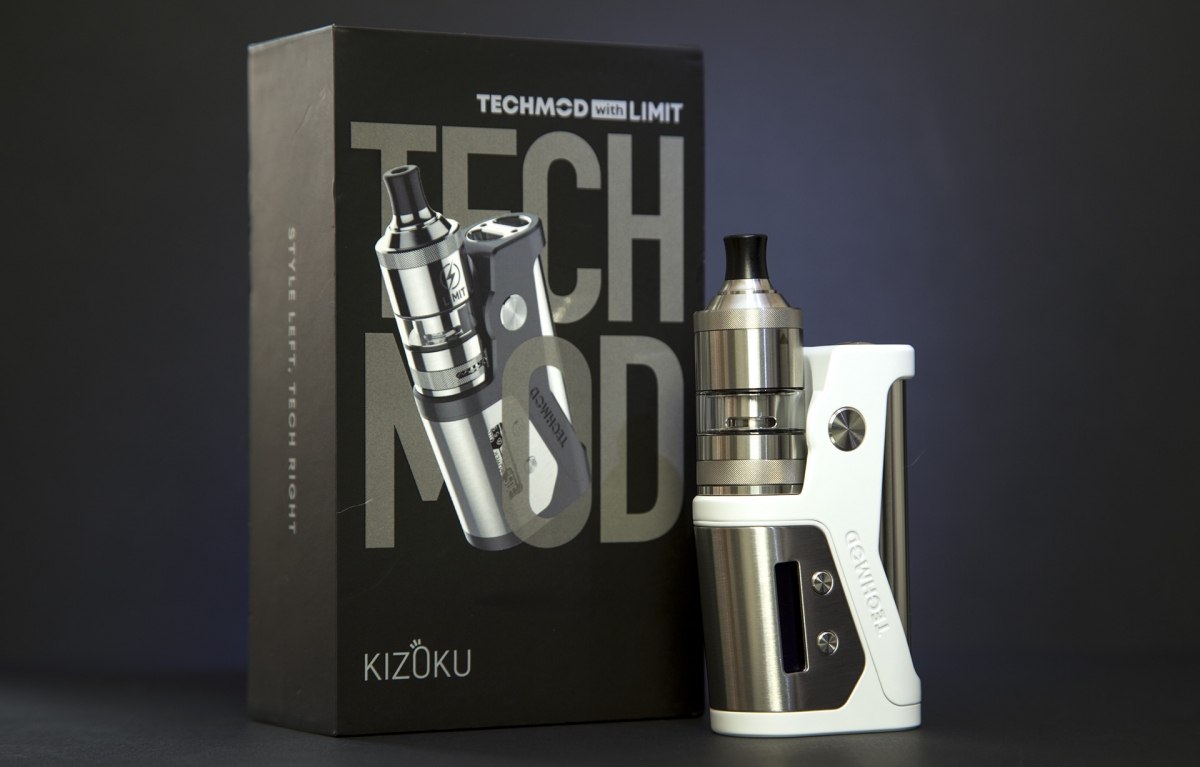 I hadn’t heard much of Kizoku as a brand until last year when a couple of other POTV reviewers got to test out a couple of RTAs and I saw a few forum members buying this kit. They seemed to be rather pleased with the kit, but being honest I couldn’t see what all the fuss was about and saw nothing innovative other than the SBS (Side By Side) styling. If it hadn’t been for Health Cabin, I would have totally missed out on this kit! 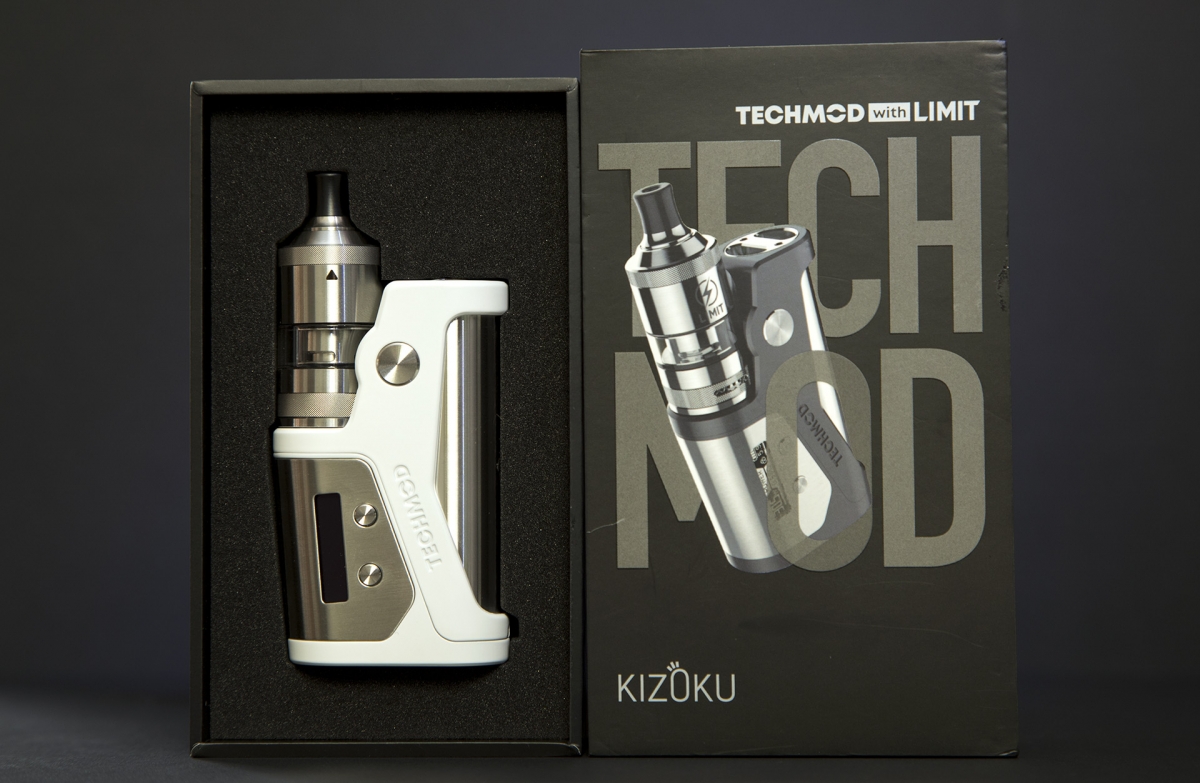 The kit comes in a very sturdy box with the mod and tank assembled on the top layer, underneath has all the extras and there’s plenty of those. 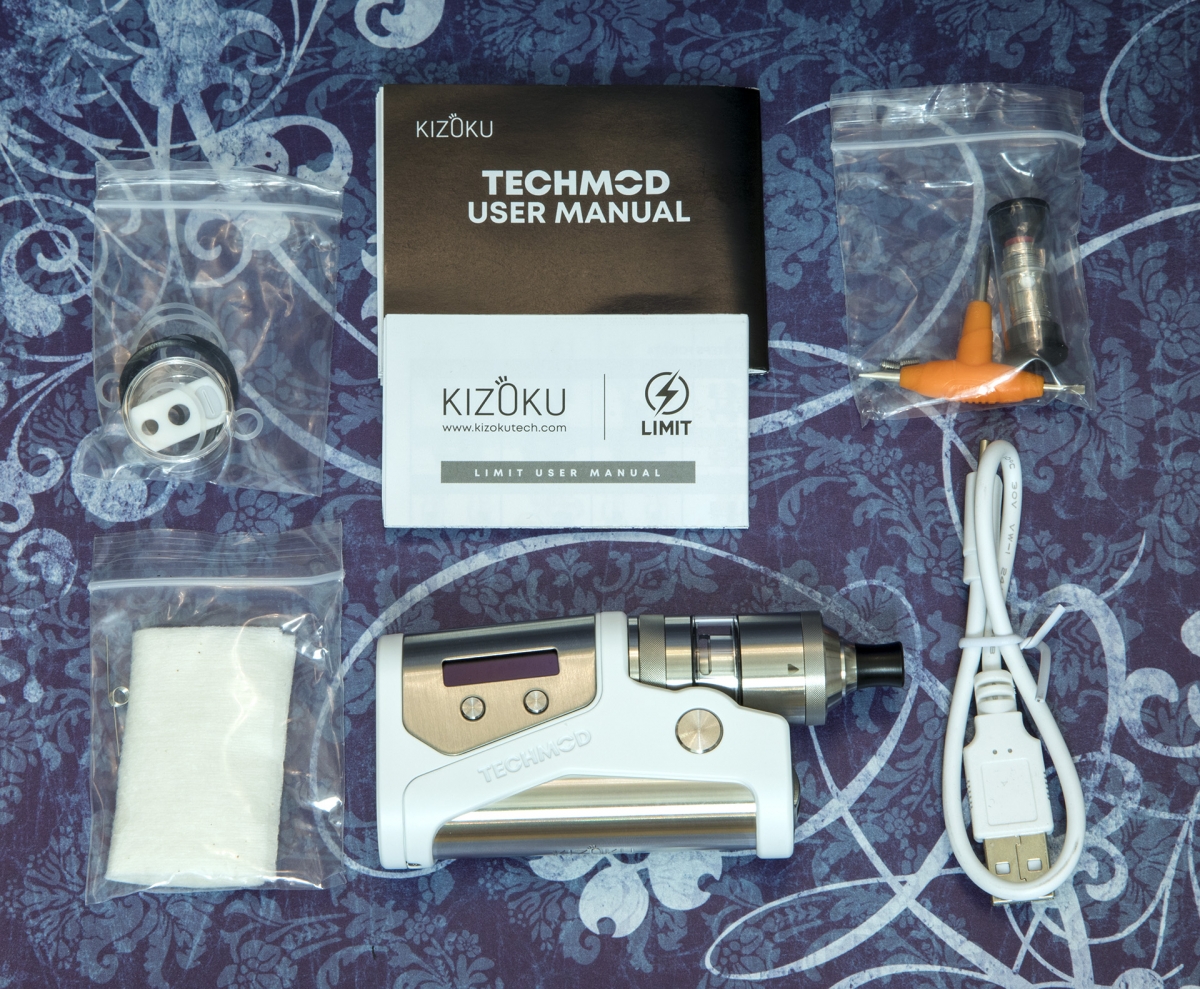 It was nice to see a stock coil and a DIY coil and cotton included. The instructions fold out sheet was nice and clear and also included a separate one for the LIMIT tank. There were also plenty of spare seals, a usb-C cable and a tri-tool.

Bear in mind, as a reviewer, I receive a lot of new kit, some great and some not so and it’s hard to get excited when testing new stuff. The Kizoku Techmod and Limit kit was one of the most pleasing kits I’ve received, the moment I picked it up I was genuinely smiling from ear to ear! 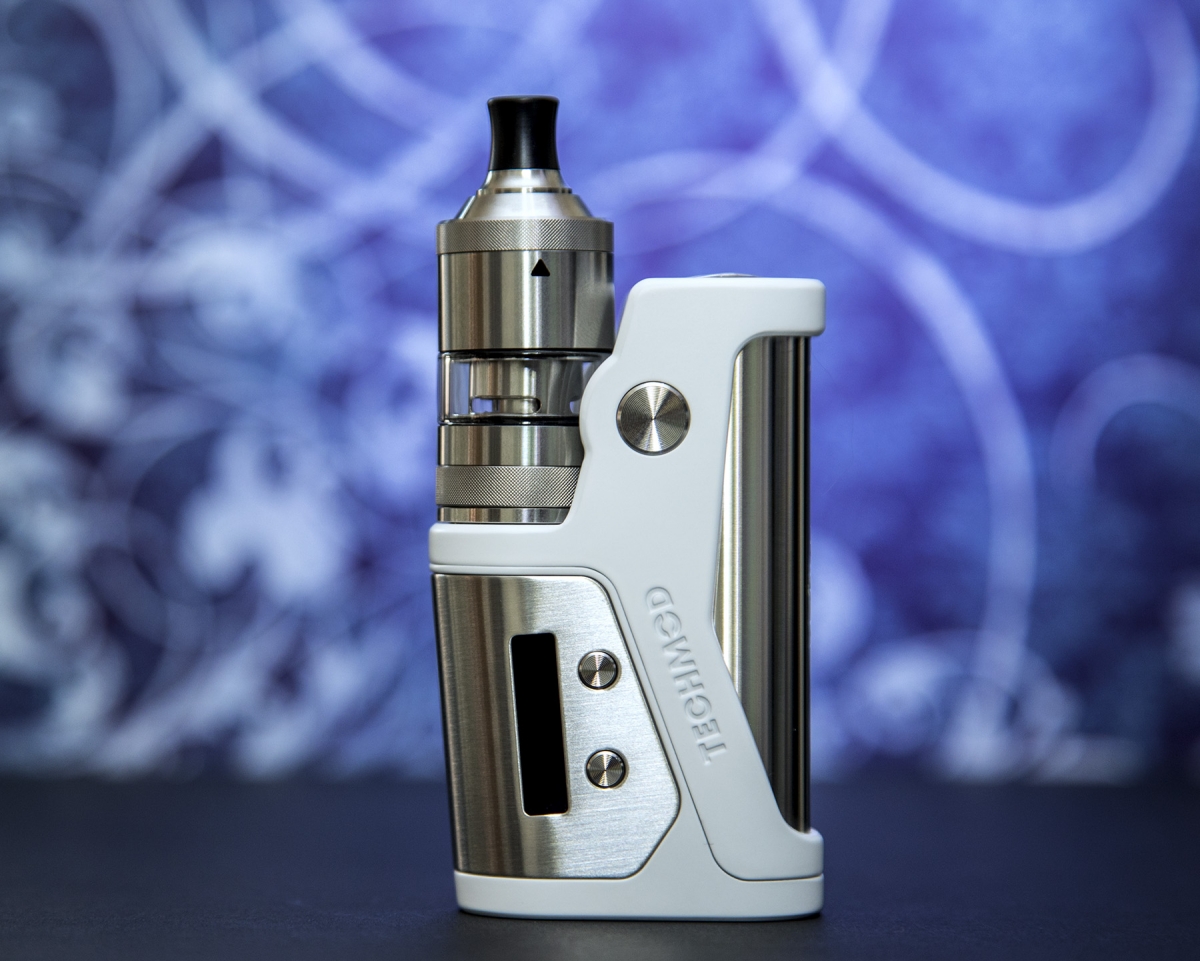 The shape, weight and visuals are all so interesting and it moulds into your hand so naturally. I chose the white version which suited the stainless steel parts really well. The body is zinc alloy and is fairly weighted once you pop a battery in. The white coating is so smooth and tactile. I’m not sure what the coating is, it seems like a high quality satin powder coat but I could be wrong. I wish it came across in the photos, but it’s exceptional.

As you can see, the shape is rather interesting and is sculpted to fit into your hand perfectly. At first I thought that the fire button was oddly place, but it turned out to be the perfect place, whichever way you grip it your inside finger or thumb naturally rests on it. It’s so intuitive that you’re never left fumbling around trying to find it. 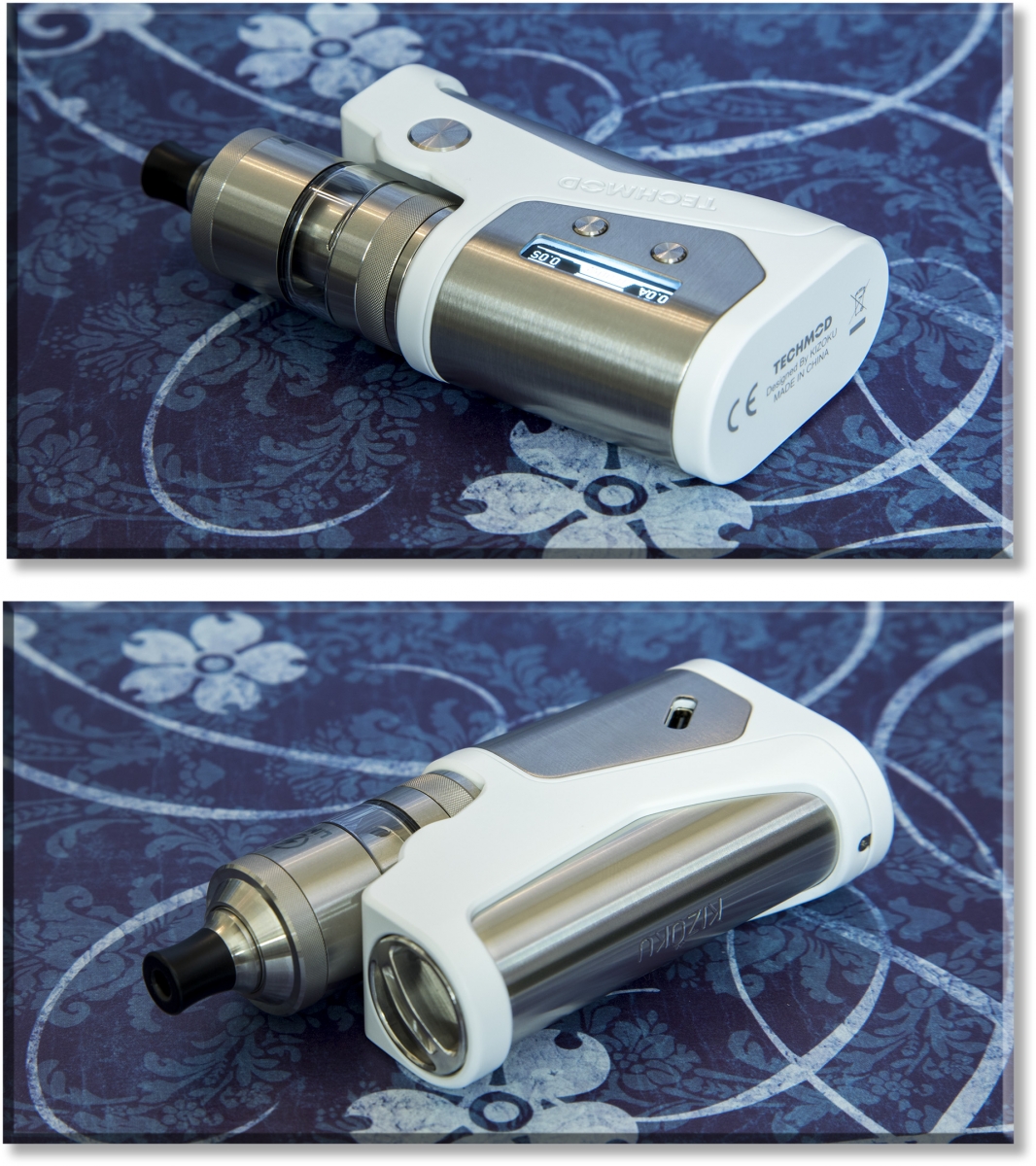 The branding is very subtle and embossed or engraved rather than printed which looks quality, the only printing is on the base.

I like the position of the battery cap being on the top of the mod instead of underneath, it just adds to the aesthetics of it. The screen is very bright with an unusual inversed display which can be a bit difficult to read at times. That said, it was perfect in outdoor lighting, the important ‘wattage’ was easier to read though. The adjustment buttons are well placed and out of the way of your fingers making accidental adjustments difficult.

Fitting an 18650 battery was simply enough, the cap has an arched mini handle for your fingers to grip and turn. The threads were very good quality. The cap had a negative marking which wasn’t too clear but the inside had a larger red cross for the positive end. Screwing it back on needed a bit of care to ensure you don’t cross thread it, a half turn anti-clockwise usually clicks the thread into place though. 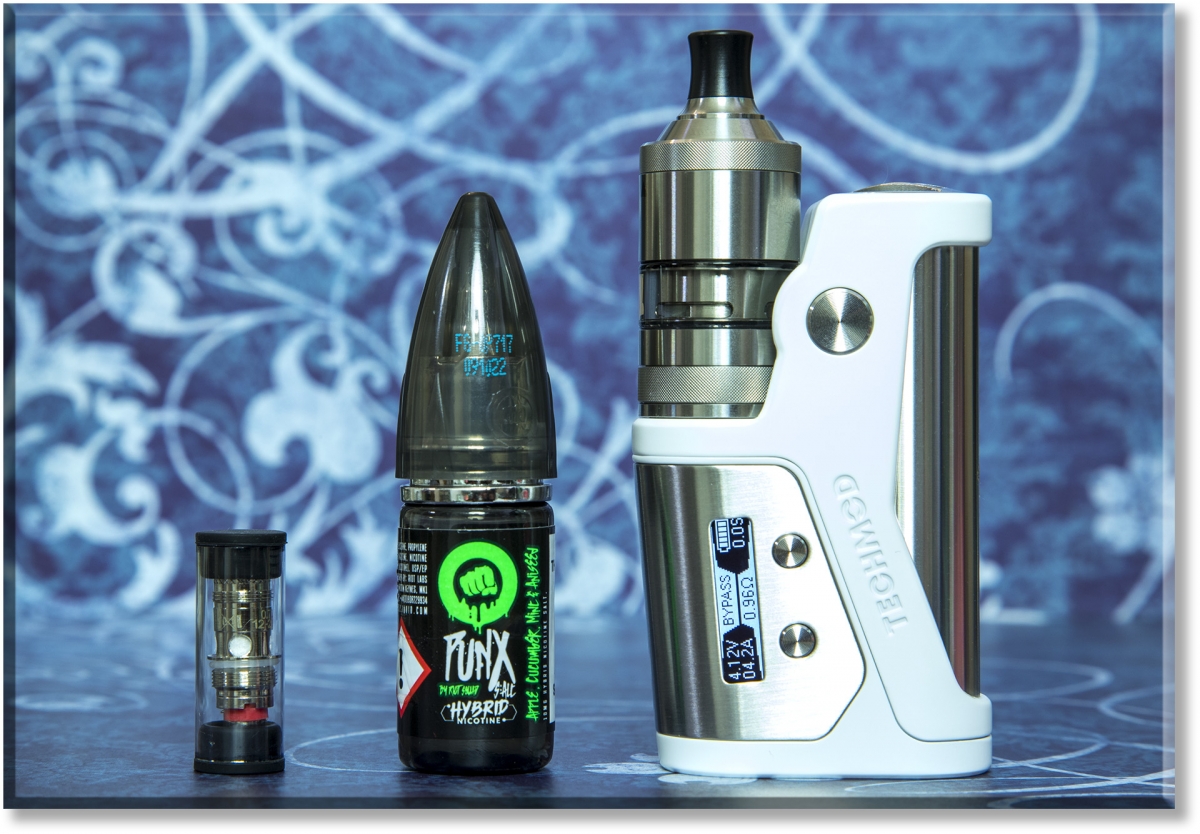 Interestingly the tank is dual purpose, it takes stock coils but it is also an RTA for DIY coils. This is a smart move as this kit will be suitable for new and experienced vapers alike. The coils appear to be an Aspire Nautilus which are commonly available. This is a huge pro for a lesser known brand.

The filling method was interesting. You need to unscrew it and then slide the top to reveal the fill bladder. This might sound a faff but it really wasn’t and is a very secure method. 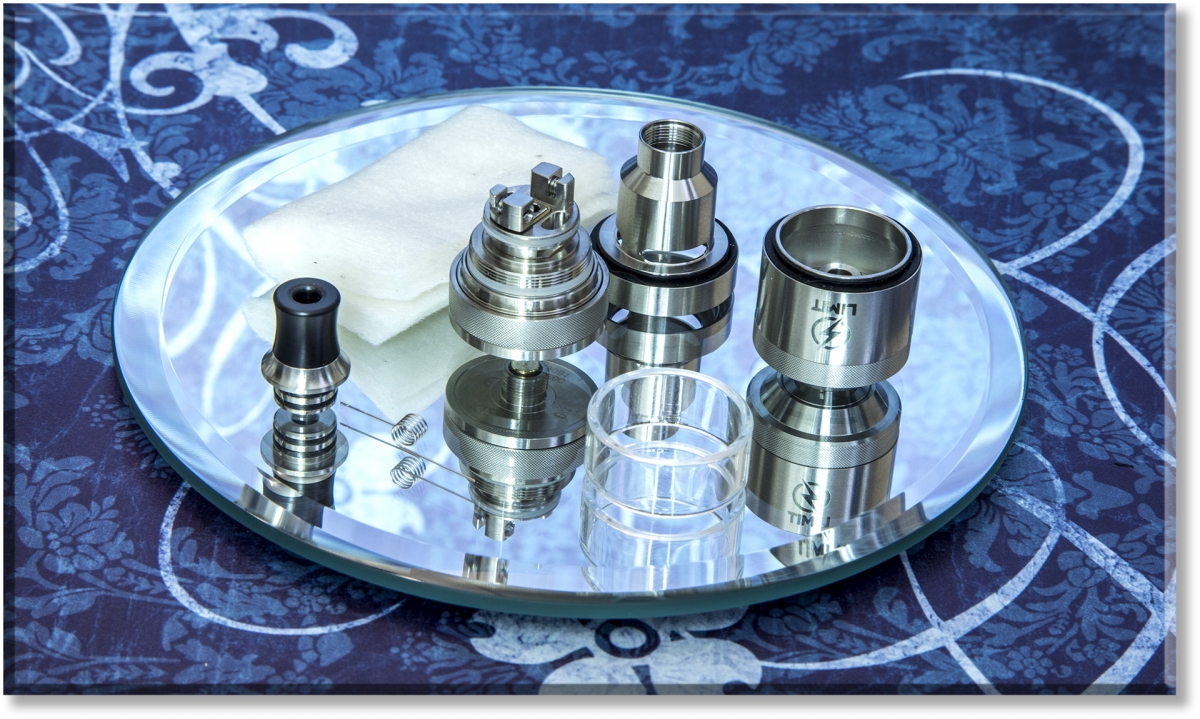 Stripping the tank down was the usual unscrew everything anticlockwise, and once stripped you can get to everything to clean it. At this point I noticed the chimney would allow you to unscrew the build deck from the assembled tank turned upside-down without having to empty it first, another pro. 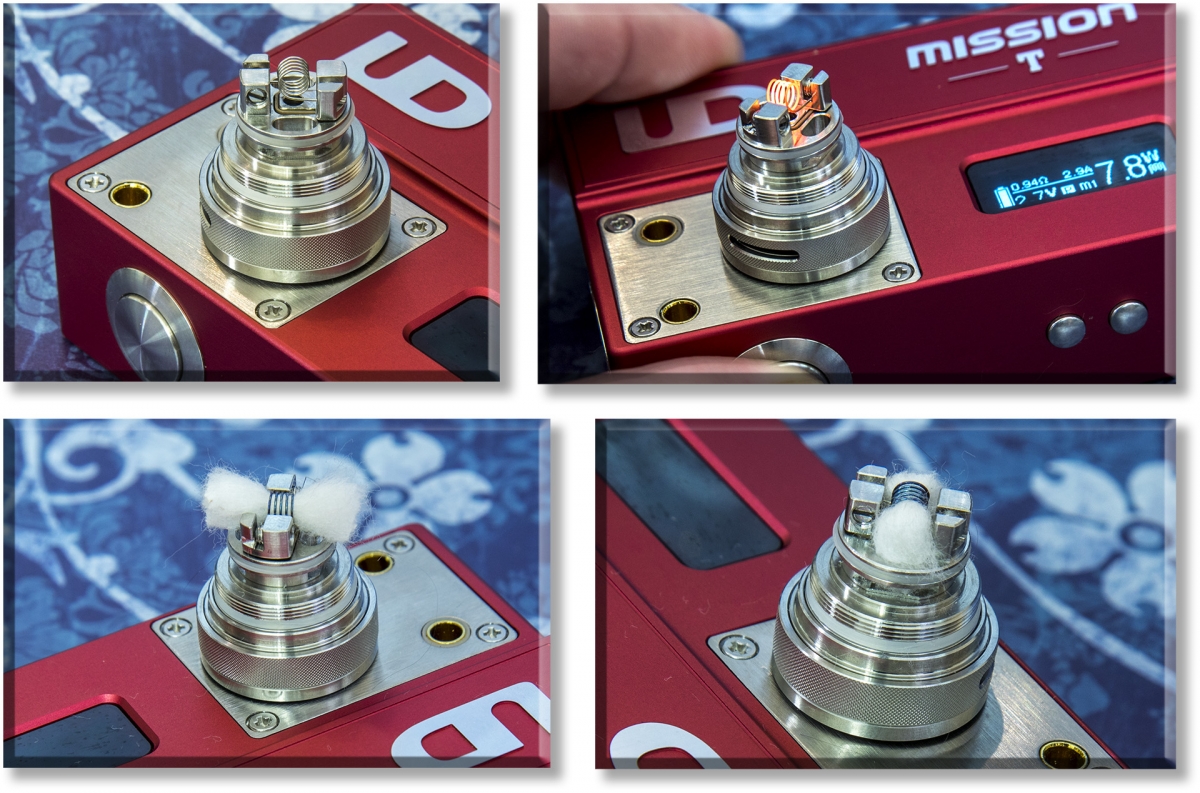 Building with the provided DIY coil was pretty easy though wicking needed a bit more care, a partial dam method works best so make sure you don’t stuff too much wick into the juice ports, just tuck it on top of the ports, this method gives a far better juice flow. I did try the normal way of hanging the legs of the wicks into the ports but it didn’t keep up with chain vaping so I reverted back to the dam method. 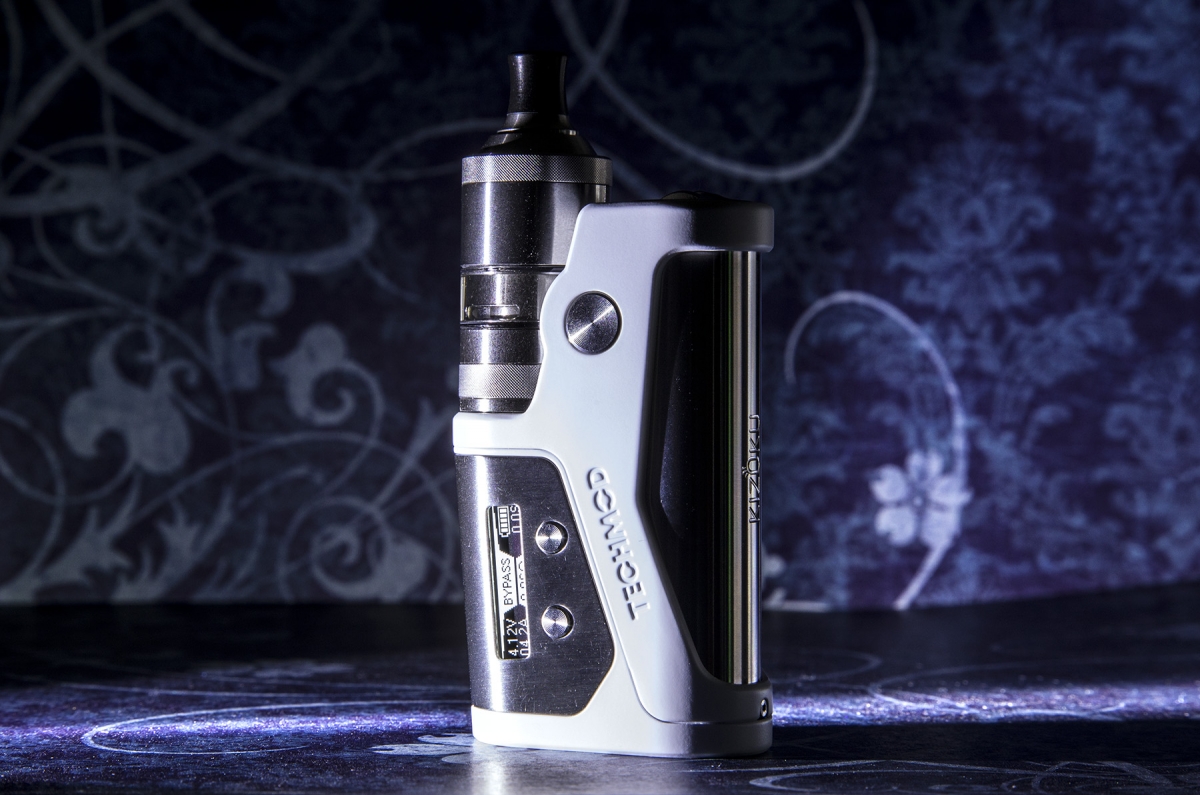 The Kizoku Techmod is pretty easy to navigate and has a decent range of functions including a decent TC (Temperature Control) function.

The manual doesn’t mention how to adjust the wattage in TC mode but it was easy enough to figure out. Once in TC mode, select your temperature then press FIRE and UP, this will then let you choose your wattage.

Tank you very much

Though the Kizoku Techmod kit comes with the 22mm diameter Limit tank, it will fit up to 24mm tanks. But this creates a unique problem that most SBS mods have, that is the luck of the draw whether it obstructs your airflow when screwed on. I only tried the Vandy Vape Berserker V2 and that fully blocked the airflow. This problem isn’t so much of an issue with 22mm tanks, at worse you won’t be able to see the airflow but there’s enough room for the air to get in. Ironically the tank that came with this kit almost exactly obscured the airflow intake so I had to adjust the airflow prior to screwing the tank down, a minor annoyance as I rarely adjust my airflow once set.

I really enjoyed trying other 22mm tanks on the mod though, everything seemed to work well due to the quirky shape. Even my Vaporesso GTX One tank held a certain charm. If this wasn’t a kit, I would still be over the moon with just the mod, but I soon found myself going back to the excellent Limit kit tank.

You have no idea just how much I was hoping that the vape would live up to the hype in my head after loving every moment of this review so far. Fortunately it delivered perfectly, in fact it easily rivalled my favourite MTL tanks and pods. The airflow control was spot on and I could get a really tight draw, the vape delivery was very smooth and the flavour was faultless.

By now I realised what I had missed out on with this charming little device, I always bear in mind the novelty factor of shiny new kit, but I always know when something a bit special like this kit is, and it will remain a favourite for a long time to come. There’s nothing that will become out-dated and I consider it as a design classic.

Most of all I really appreciate the work that the designers have put into this device, the attention to detail makes this kit rank very highly in my vast collection.

As you can already tell, I really love this kit. I would go as far as to say it’s a must have for MTL fans (assuming the looks appeal to you). I’m approaching the pros and cons and I’m already struggling to think of a single con. I don’t consider the airflow position a con as it’s the nature of the beast for SBS mods and it hasn’t affected my enjoyment of this kit.

Both the mod and the tank are special so putting them together gives the complete MTL experience in my opinion, if I had to give this sample back I would immediately order another one.

From start to finish, reviewing the Kizoku Techmod and Limit MTL tank has been a genuine joy. There’s no reason that I won’t carry on using this kit as my main goto MTL setup. 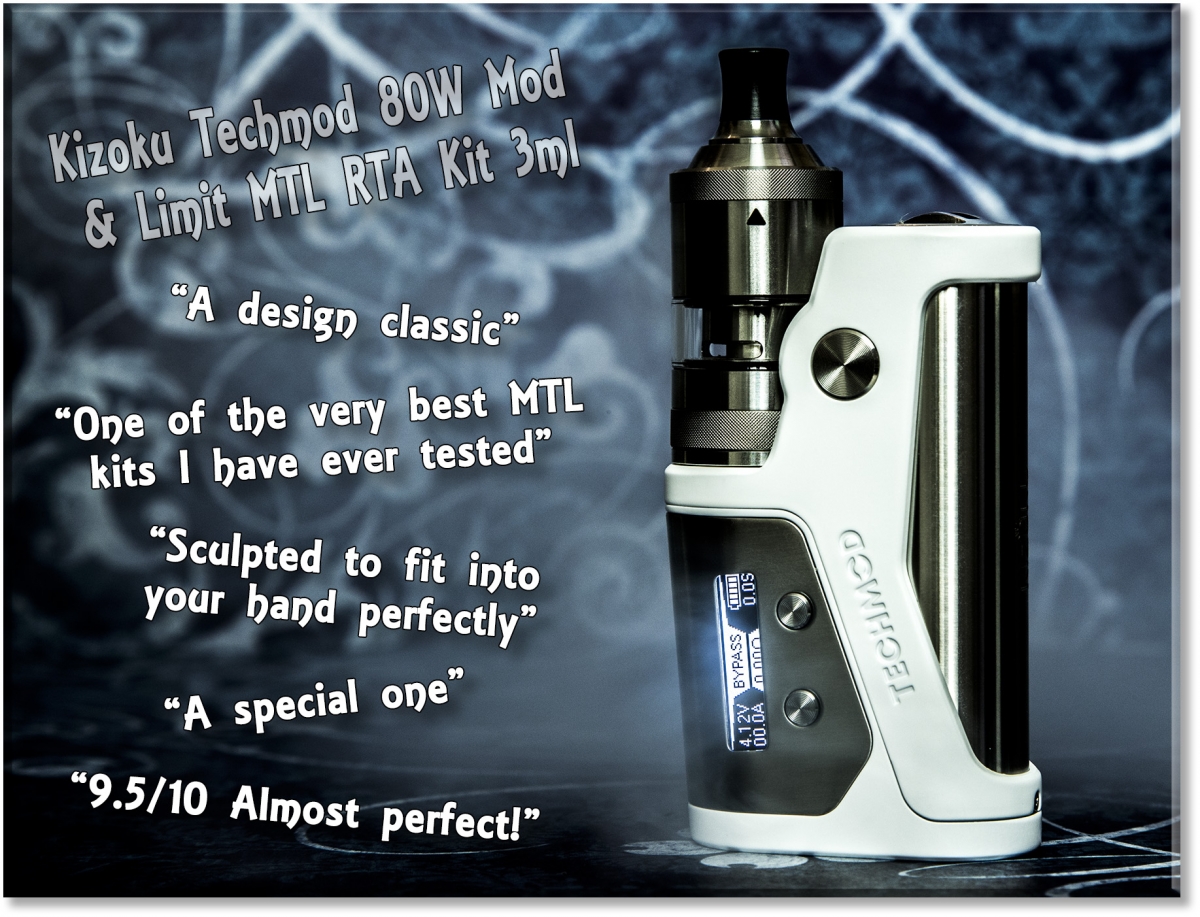